King George III: A Connoisseur Collector of Timepieces by JESSICA

George III ascended the throne in 1760 when he was 22 years old. That same year, George III built the Kew Observatory with the original purpose of observing the transit of Venus. Eventually, he located his collection of 2,000 timekeeping and scientific instruments to the observatory; the greater part of his collection is now on display at the Science Museum in London. For more than two centuries, Kew Observatory fulfilled a scientific role and was used variously as a meteorological station, as a research laboratory to test scientific apparatus and a facility to test and rate timepiece movements for accuracy. For a period, Kew Observatory also served as the Prime Meridian and provided the time-signals for the official London time.

In 1761, George III purchased Buckingham House for his wife, Queen Charlotte, to serve as a comfortable family home. In the sixty years of his reign, George III immersed himself in varied cultural interests and a lifelong devotion to horology. During the early part of his reign, he exercised a profound influence on the Royal Collection by acquiring the finest precision timepieces to furnish every room of Buckingham House. 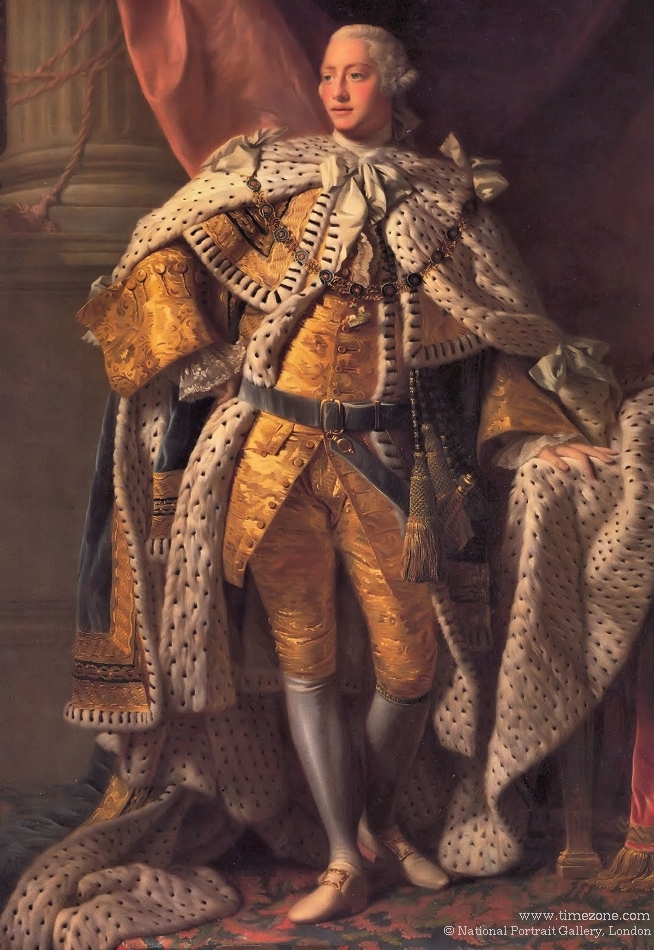 Thomas Mudge was an English horologist who apprenticed for George Graham. After Graham died in 1751, Mudge set up on his own in Fleet Street, London. Mudge acquired such a prominent reputation that the King of Spain gave him carte blanche to select and supply any watches and clocks that he cared to send. In the 1750s, Mudge originally conceived of the lever escapement in either a prototype model or drawing. By the 1760s, Mudge constructed the lever escapement for clocks and, thereafter, applied the lever escapement to watches. His invention consists of an escape wheel, the lever and a balance wheel. The lever, when acted on by the balance wheel, locks and unlocks the escape wheel, allowing power to flow through the gear train in a uniform motion. It fulfilled the requirements of close, precision rates for long-term performance with the advantage of robust reliability. For 250 years, the lever escapement became the heart of most mechanical watches.

In 1770, Thomas Mudge constructed the first lever escapement watch for George III as a gift for Queen Charlotte. Known as the “Queen’s watch”, it is believed that Queen Charlotte kept it beside her bed at Buckingham House. Because the lever escapement was the biggest single invention in the field of watchmaking after the balance spring, the watch has been described as “the most historically important watch in the world”. In 1776, George III appointed Thomas Mudge the Royal Watchmaker at a fee of £150 per annum, and this continued for the rest of his life.

The Queen’s watch needs winding only once a year. The watch currently resides with Queen Elizabeth at Windsor Castle, and the Royal family can recount nearly everyone who has ever wound it. The 22-carat gold case is struck with London hallmarks for 1769-70 and a maker’s mark (Philip Mounier). The watch measures 5.7 cm in diameter and is surprisingly thin. The display pedestal features tortoiseshell panels with a gilt bronze plinth and measures 10.0 cm x 8.6 cm x 8.6 cm.

A Repeating Watch Ring and Marine Timekeeper by John Arnold

John Arnold was an English watchmaker who descended from a family of clockmakers and gunsmiths. After apprenticing for his father in Cornwall, he was a journeyman traveller in Holland before establishing himself in the Strand, London. In 1764, John Arnold was favoured with a royal audience, at which he presented George III with a tiny half-quarter repeating watch mounted in a ring. George III was so pleased by this marvel that the event was reported by journalists in two publications.

Thereafter, George III commissioned John Arnold to craft another repeating watch in a ring and, on 5 November 1767, the royal records reflect a £100 payment to Arnold for what is believed to be a marine chronometer prototype. In 1770, Arnold presented to the Board of Longitude a precision pocket watch that was a miniature version of his larger marine timekeeper. At the time, it was very much in the country’s best interests to solve the constantly recurring problem of accurately determining the longitude when out of sight of land, thereby avoiding unnecessary risks of shipwreck or starvation.

During the 1770s, John Arnold and his son Roger manufactured marine timekeepers and supplied the Royal Navy and famous British explorers such as Captains James Cook, the Hon. Constantine Phipps, Matthew Flinders and George Vancouver. In 1778, his marine timekeeper performed so precisely during testing at the Greenwich Royal Observatory that Arnold called the timekeeper a “chronometer” and thus coined the term “marine chronometer” in its modern sense. 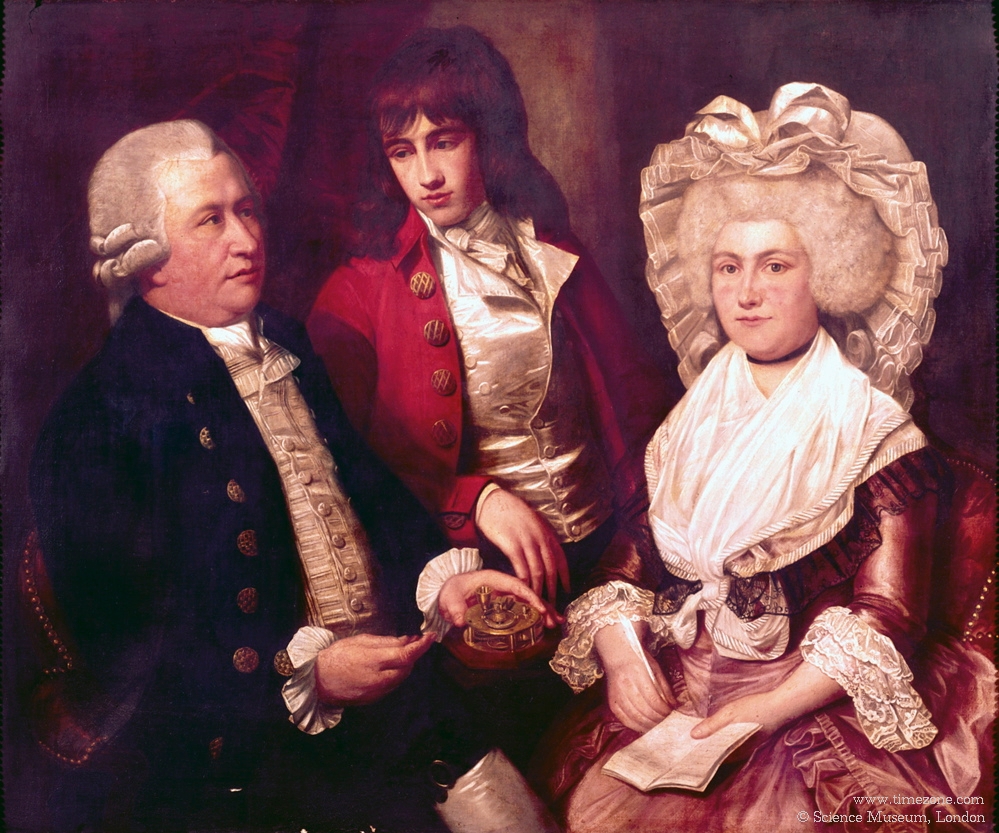 A family portrait of John Arnold holding his marine chronometer

Eardley Norton was an eminent English clock- and watchmaker based in Clerkenwell, London. In 1762, he was accepted into the Clockmakers’ Company and he became a Freeman in 1770. In 1771, he patented a striking mechanism for clocks (Patent No. 987).

In 1765, George III commissioned Norton to make an astronomical clock to stand in the library of Buckingham House. This astronomical clock is considered Norton’s finest work. The complex and compact quarter-striking movement displays on the principal face the time of day on a 24-hour dial with hands for mean and solar time. In the centre a painted landscape with figures shows the passage of the sun across the sky and a small centre dial records the time at thirty locations around the world relative to mean time. A lunette at the top records the date and month. The left dial shows a year calendar on a spiral, indicated by a retracting vertical hand. Two further dials show the month and day and a third is for regulating the clock. The right dial functions as an orrery with six planets moving around the Zodiacal circle. The back dial shows the phases of the moon on a revolving half-silvered sphere, the age of the moon in Arabic numerals and high and low water at thirty-two named seaports in Roman numerals.

This astronomical clock cost the very large sum of £1,042. This payment probably included the charge for the exceptionally fine carved mahogany case, framed by palm-tree columns and mounted with silver plaques and lion and unicorn crestings. The clock dimensions are 43.8 cm x 26.7 cm x 24.5 cm. 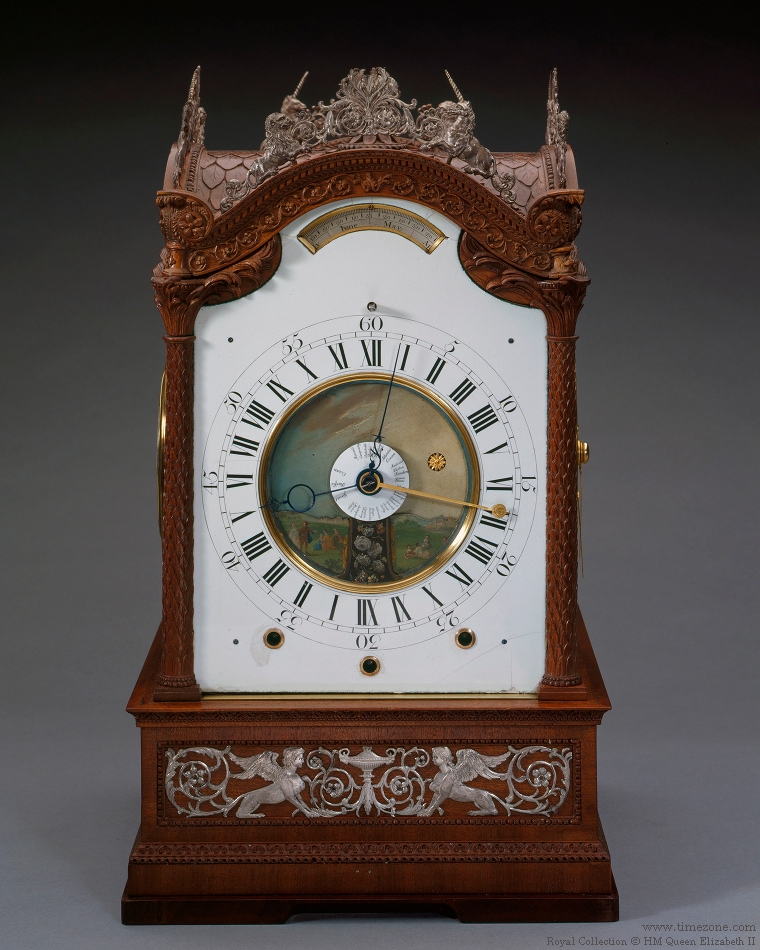 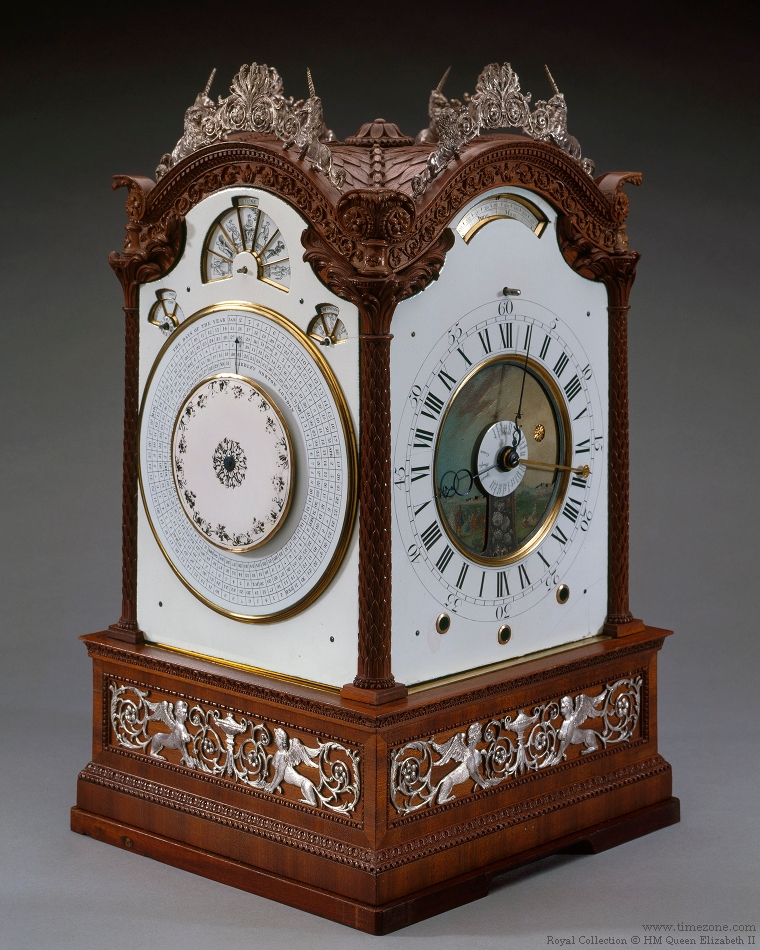 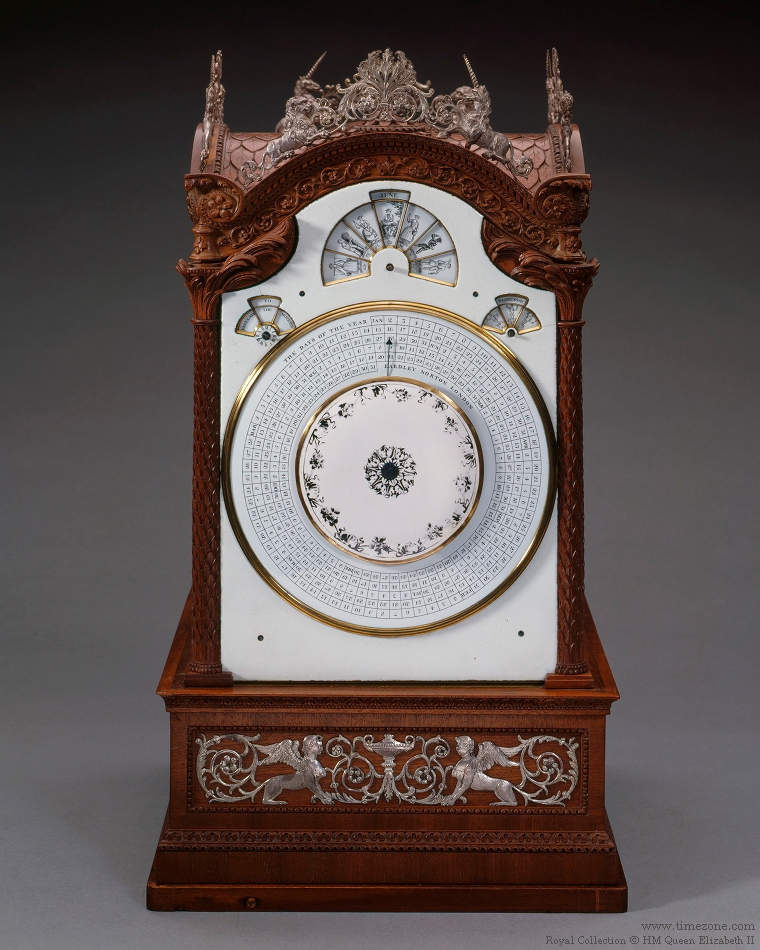 A calendar year on a spiral, indicated by a retracting vertical hand 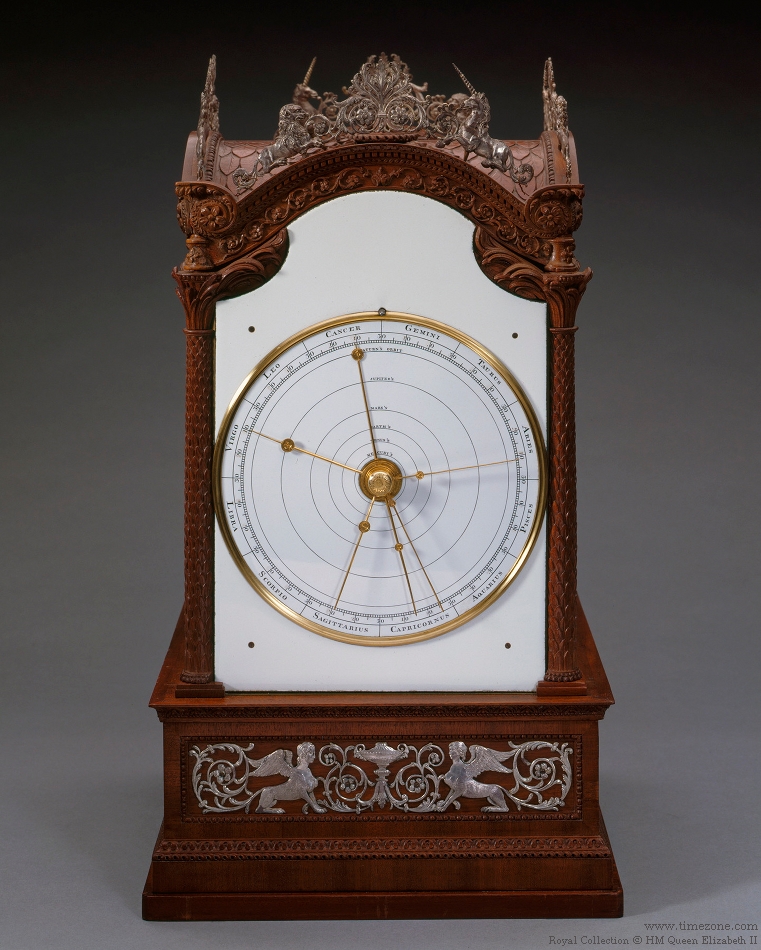 An orrery with six planets moving around the Zodiacal circle 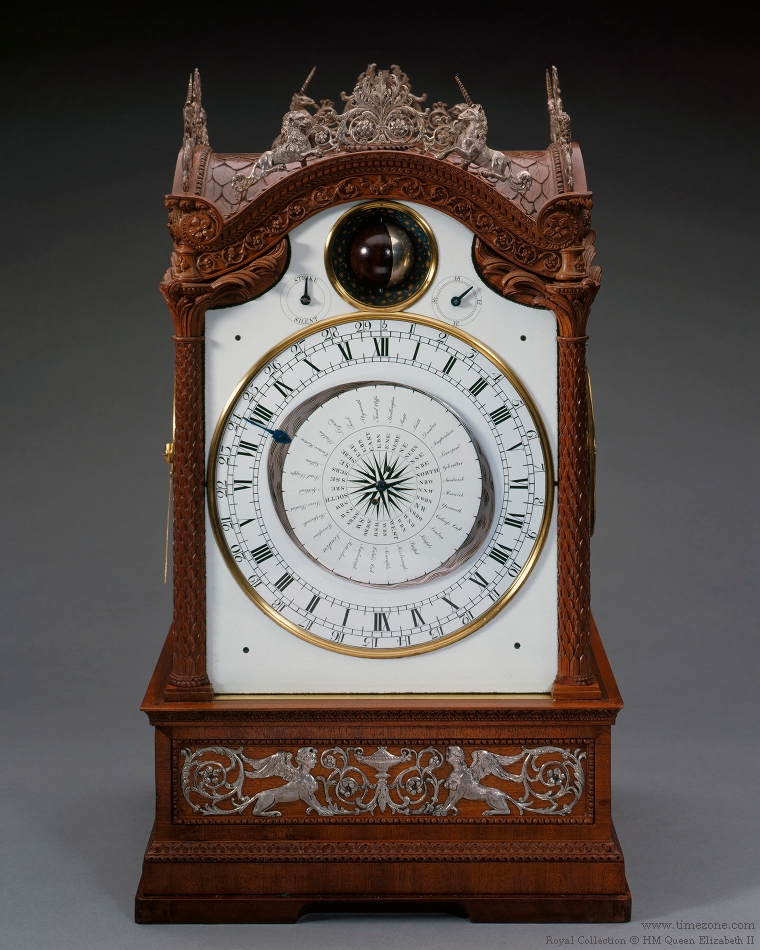 Phases of the moon on a revolving half-silvered sphere

The age of the moon in Arabic numerals; high and low water at thirty-two named seaports in Roman numerals

The oak clock case features padouk veneer, ivory interior columns, pierced gilt bronze angles at the base and pierced shell ornaments below the dial. Gilt bronze mounts are finely chased with drops of flowers and are of remarkable quality. A gilt bronze figural group is represented by “Time” and Cupid. The clock dimensions are 243.2 cm x 57.8 cm x 45.7 cm 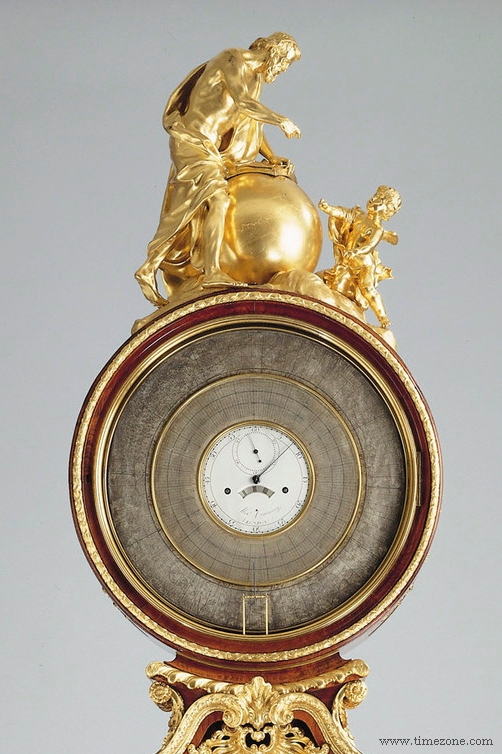 Time is accompanied by Cupid in gilt bronze

Benjamin Vulliamy was the son of a Swiss clockmaker who moved to London. Vulliamy apprenticed for his father and joined his father’s business (Vulliamy & Son). In 1773, Benjamin Vulliamy enjoyed a Royal Appointment for which he received a fee of £150 per annum for the repair and maintenance of timepieces in the Royal Collection.

Benjamin Vulliamy’s most advanced timekeepers were his regulator clocks. Of three regulator clocks he made for George III, two were installed at the Kew Observatory to serve as the main timekeepers. The two observatory clocks have gridiron compensation pendulums and grasshopper escapements that are not only of the highest accuracy, but virtually friction-free. The Kew Observatory served as Prime Meridian and were responsible for the official London time until 1884, when the Greenwich Royal Observatory assumed both roles.

The third Vulliamy regulator clock, with pedimented top, has Graham’s dead-beat escapement and mercurial compensation pendulum. The movement is numbered 830 and the clock remains in Buckingham Palace.

In 1802, Recordon made a simple, engine-turned gold repeater for George III. The watch incorporates a quarter-repeating mechanism, which strikes the last hour and divisions of the hour. This was a particularly useful function at night, at a time when illumination was not always readily available. The gold watch case is struck with hallmarks for London, 1802-3 and maker’s mark (Louis Comtesse). The case and movement are engraved with serial numbers. The watch dimensions are 8.6 cm x 5.6 cm x 1.6 cm 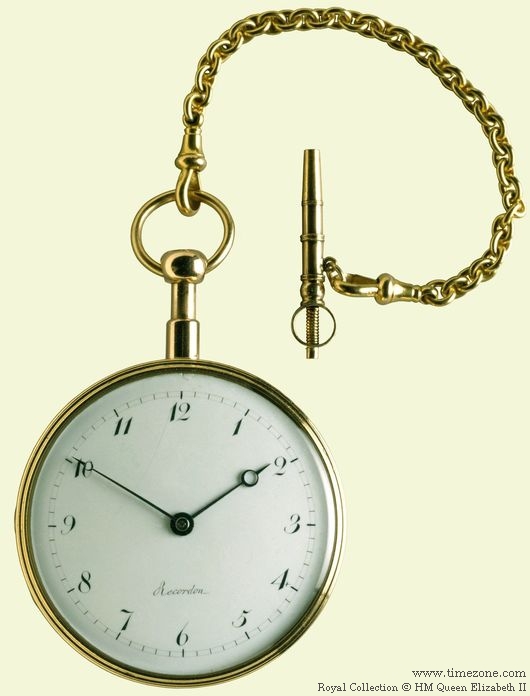