BR01 instruments and the avionics that inspired them by EDWARD HAHN

While many of us admire the styling of the new instrument collection from Bell & Ross, some do not know the actual flight instruments that inspired them, so here’s a quick tutorial on what they are and how they are used. 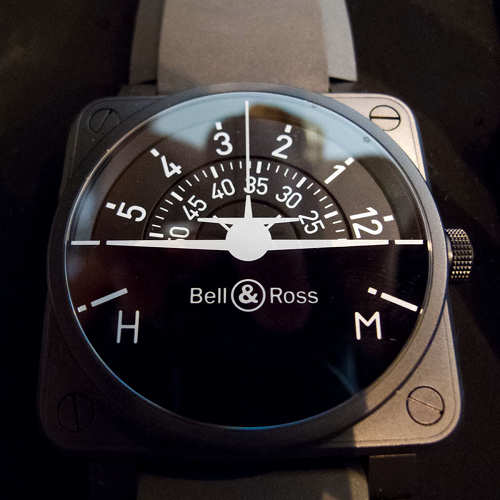 The BR01 Turn Coordinator is based on a flight instrument of the same name: 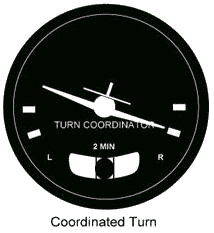 The first, indicated by the “ball” and track at the bottom of the display, is simply a ball in a tube that is free to move back and forth (the tube is filled with liquid to dampen the motion of the ball.) The function of this is to show whether the aircraft is properly coordinated – that is, that the local acceleration is aligned with the vertical axis of the aircraft, which is the proper way to make a turn. This prevents coffee from spilling, and more importantly ensures that the wings and fuselage are aligned with the airflow. If the ball were to move out of the center, then the aircraft is skidding or slipping, analogous to a car in a sideways drift. The proper response by the pilot is to “step on the ball”, or apply the rudder pedal on the side where the ball is sitting. This will straighten the aircraft. (Note that there are some situations where the pilot will intentionally put the aircraft into a slip, such as when landing on a runway with a crosswind.)

In the case of the watch, the hours and minutes are shown as discs which rotate behind a mask containing the aircraft and H/M graphics. Seconds is shown as tickmarks rotating on the innermost disc behind the aircraft graphic. 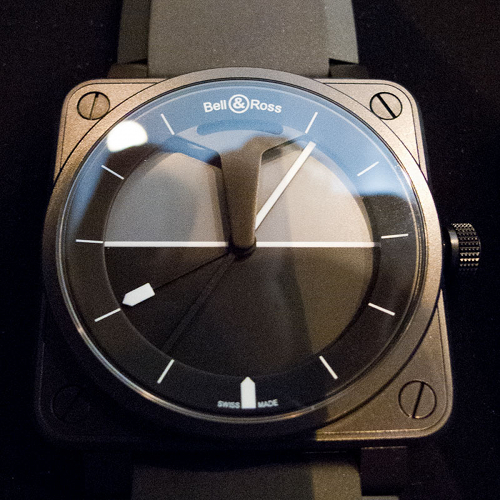 BR01 Horizon
The BR01 Horizon is based on the Attitude Indicator (also known as the attitude gyro or artificial horizon): 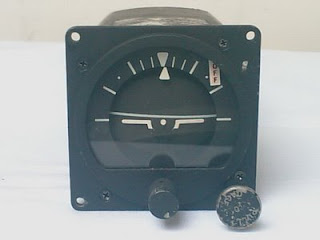 The graphics used on the Bell & Ross model are based on very early kinds of attitude gyros; most attitude indicators use colored backgrounds (blue and brown) to show the sky and ground, and also use simplified “wings” to show the aircraft’s wings and nose. The white line in the background is a representation of the horizon line.

The Attitude Indicator is an instrument that simply shows the aircraft’s nose (dot) and wings relative to the horizon. While this is simply a repetition of what one sees out the window when the weather is good, this instrument is invaluable during instrument flight (e.g. at night, in a cloud, or flying in rain). The scale and pointer at the outer edge shows the angle of bank (leaning left or right). On modern indicators, there is a scale printed (or displayed) above and below the horizon line on the back card, which shows the pitch angle (or angle above or below the horizon.)

The pilot uses this instrument to monitor the aircraft’s attitude, which is the most important piece of information needed for maintaining controlled flight.

For the Bell & Ross watch, the solid line and pointer correspond to minutes and hours. The horizon card does not move, and there is no seconds indication on the dial. (Yeah, the watch is rather abstractly connected to the flight instrument.) 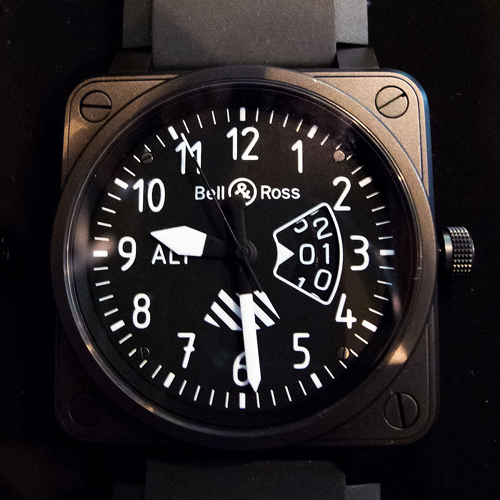 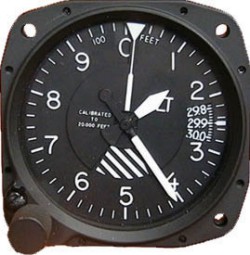 The altimeter on the face of it is a simple instrument – it simply reads out the altitude of the aircraft, based on the ambient pressure of the air surrounding the aircraft. (Air becomes lower in pressure as altitude increases.) In the photograph of the instrument, there are three hands: the short hand (like an hour hand) is for thousands of feet. The medium length hand (looks like a minute hand) is for hundreds of feet. The long hand (it’s the one with the pyramid at the tip, rotated just clockwise of the ‘0’) is for tens of thousands of feet. In this case, the altimeter is reading a tiny bit above 1400′.

The most obvious difference between the actual instrument and the watch is that the scale is base ten rather than base twelve, which of course makes sense if one is trying to use hands to indicate a decimal quantity like feet.

The opening between the ‘2’ and ‘3’ on the flight instrument is called the Kollsman Window, and is the means by which the altitude is corrected to local barometric pressure. It is standard practice to have the altimeter read the height above sea level, which means that when landing or taking off, the altimeter actually reads the altitude of the airfield, not zero. However, due to the day to day variation in barometric pressure, the indicated altitude can move up or down by a significant amount. This would be bad if one were trying to land, and the readout did not actually correspond to the actual height above sea level. The knob at the lower left in the photo allows the pilot to adjust the readout of the instrument based on the reported barometric pressure at the airport – in other words, if the pressure at the airport is reported to be 30.12 inches of mercury, the pilot rotates the knob, which turns the disc exposed in the window, until 30.12 is shown next to the pointer. This in turn adjusts the mechanism inside the altimeter so the hands will read the proper corrected altitude. (The scale of the disc in the window dictates that the window be fairly wide, so one can properly read the altimeter setting.)

You may ask why English feet are used in aviation. Using feet for altitude is actually the international standard used throughout most of the world (although there are a few places which use metric altitude in meters). The reason is partially historical, and partially practical: instruments perform well enough such that 1000′ altitude is usually sufficient to safely separate aircraft, even at jet cruising altitudes. If one were to use meters, then the corresponding levels would be at about 300 meter increments. This means that, instead of, say, maintaining 12,000′ (which is easy to read and monitor on this type of altimeter – the “minute” hand should be pointing at zero), the metric altitude would be about 3600m, which is both harder to monitor, and a tiny bit more difficult to voice over the radio without confusion.

The alternative, to have altitudes at 100 meter intervals, is too narrow to be safe enough to separate aircraft. Similarly, 1000 meter intervals would be unnecessary and reduce the amount of usable airspace, leading to excess congestion and delay.

For the watch, the scale is redone to base 12 for timekeeping purposes, and the hour and minute hands correspond to the thousand and hundreds hands on the flight instrument. A conventional second hand is used instead of the pyramid-tipped hand for tens of thousands of feet. Finally, the grand date wheels are exposed in a window similar to the Kollsman Window – which is also wide enough to see more than one set of digits. This, BTW, is why many watches on the market which use flight instruments as a styling inspiration show more than one date at a time. 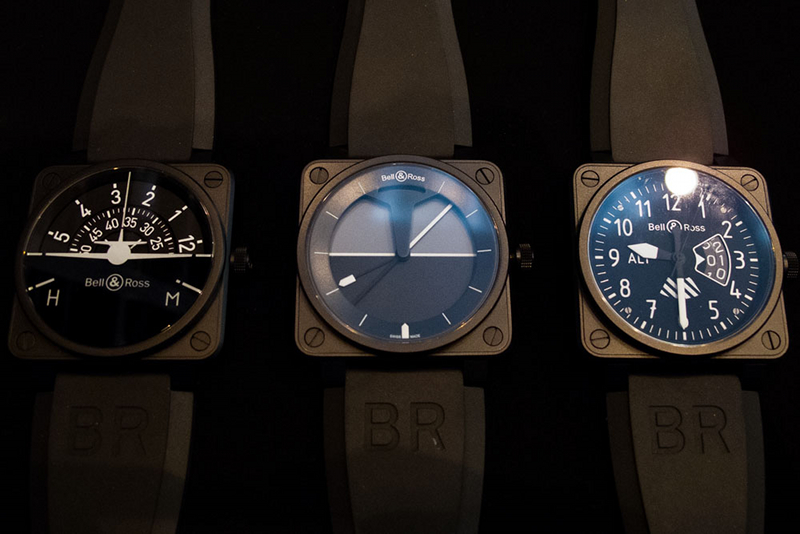 However, since 1980, electronic displays (originally vector graphic CRTs, now raster LCDs) have become the norm. As such, the appearance of flight instruments have changed significantly over these years. For example, simple directional compasses have morphed into map displays very similar to automobile navigation displays. Attitude indicators are now called Primary Flight Displays, and often show a rolling tape of altitude and airspeed to the side of the horizon display, along with other graphics that help the pilot align the aircraft with runways for landing. In some cases, these are holographically projected in front of the pilot on Heads-Up Displays.

In this sense, there is no cachet to having mechanical instruments (unlike mechanical watches); the aviation industry has embraced the increased reliability, reduced maintenance, and the morphing from repair to replacement for damaged units, with no looking back.

Anyway, I hope this was entertaining and informative!