A German-Engineered Timex to Consider by DAMON MICHAU

When the Timex Intelligent Quartz Flyback Chronograph was announced during Basel 2012, I was impressed by its looks. However, I was skeptical whether Timex could produce a watch outside of its premium TX line that would appeal to me as a watch collector. I was pleasantly surprised.

This affordable watch is not the typical drugstore Timex, nor is it one that I would only consider wearing while exercising or doing yard work. It doesn’t look or feel cheap, and the quality is on par with Seikos and Citizens that cost two to three hundred dollars more than the modest $165 MSRP. There’s also more to this watch than just its quality and good looks. The movement technology makes it an exciting multifunction analog quartz watch. 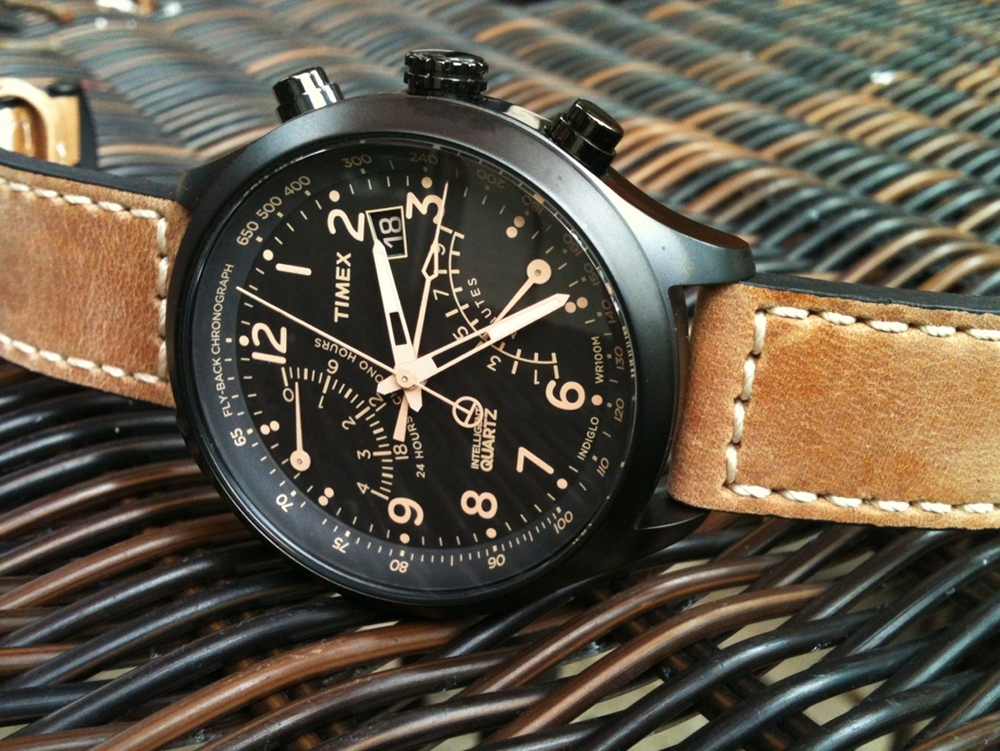 The movement is the same as the one housed in the more expensive TX line. Similarly, it’s engineered in Pforzheim, Germany, made of parts manufactured in Europe, and assembled in the Philippines. When you hold the watch up to your ear you can hear the distinct tick of the quartz hand, but the watch gets the heart of a WIS beating a little faster when the chronograph is activated since the sound of the movement takes on the same tick as a slow beat mechanical stop watch except for the off beat caused by the second hand. The case is black ion plated and has the appearance of ceramic. It measures a comfortable 42 mm, about 12 cm thick, and is light weight thanks to the hardened mineral crystal. A nice touch by Timex is that the sides of the case have a high polished finish that help to give the watch a more high quality feel and finish than what you’d expect to find on a watch that costs less than two hundred dollars. 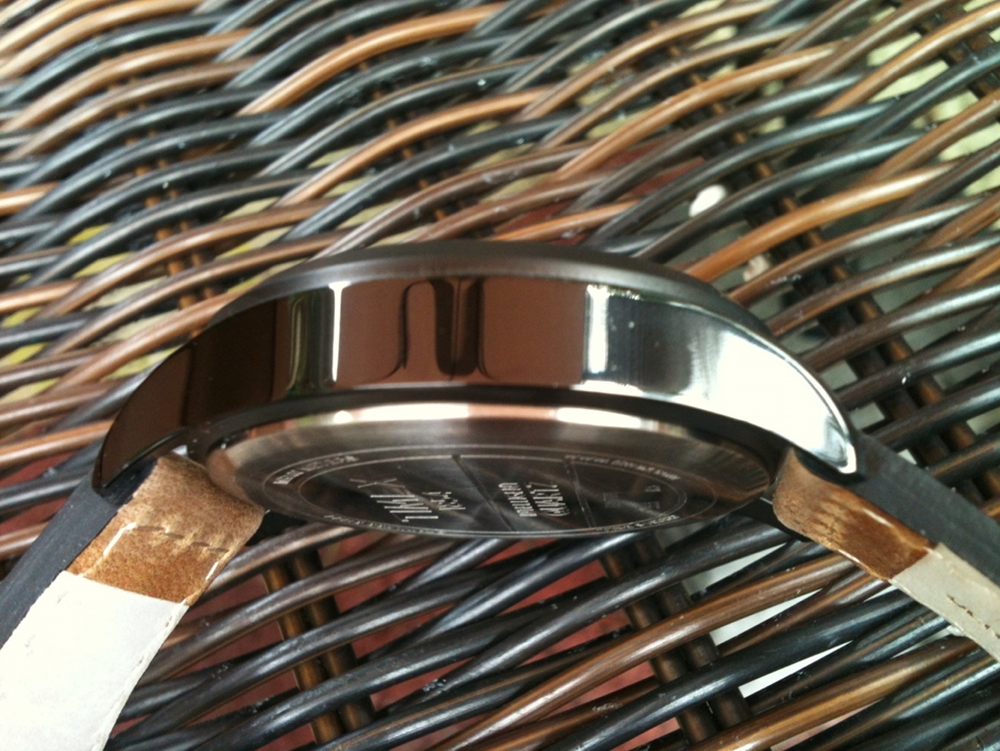 The movement in the watch is unlike any other analog multifunction quartz watch on the market in that it uses independent motors for each function of the watch. I can’t think of any other watch that offers fly-back chronograph with retrograde minute and hours recorders and a second time zone function that makes use of chronograph hour retrograde recorder and the center second hand for the chronograph. Unlike most GMT watches on the market this watch does allow you to track the minutes of a second time zone should you find yourself in one of those strange places in the world where the minutes are different and not just the hour. The chronograph allows for recording of time up to four hours which is more than enough for recording of events in day to day life. The fly-back function of the chronograph works the same way it does on a mechanical watch. While the chronograph is running you hit the lower pusher and the chronograph and sub-dials snap back to zero without having to reset it. The second hand of the chronograph doesn’t snap back to zero at a fraction of a second so it snaps back to the second marker of the time elapsed since hitting the bottom pusher. 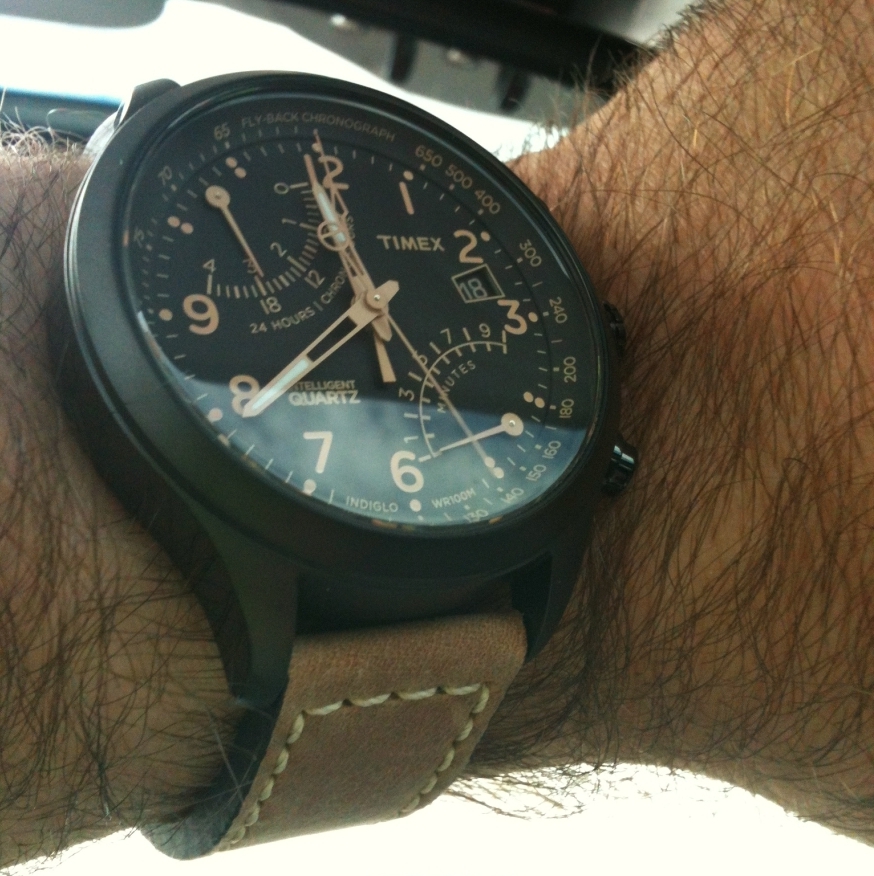 The watch uses luminous hour and minute hands glow all night long, but being a Timex it wouldn’t be complete without their signature Indiglo back lighting. The Indiglo lighting on the watch is what you’d expect from Timex in that it glows brightly in the dark when you push the button and it lights up for about five seconds. Like the other features of the watch the Indiglo feature on this watch is impressive in that it makes the chronograph feature useful in the dark since it back lights the dial allowing all of the hands to be seen. I’ve owned many analog chronograph watches over the years and none of them have ever allowed me to see the elapsed time of the chronograph in the dark. Of course this feature is only great if you are timing yourself to see if you’ve been asleep for four hours or less, but it is cool none the less. 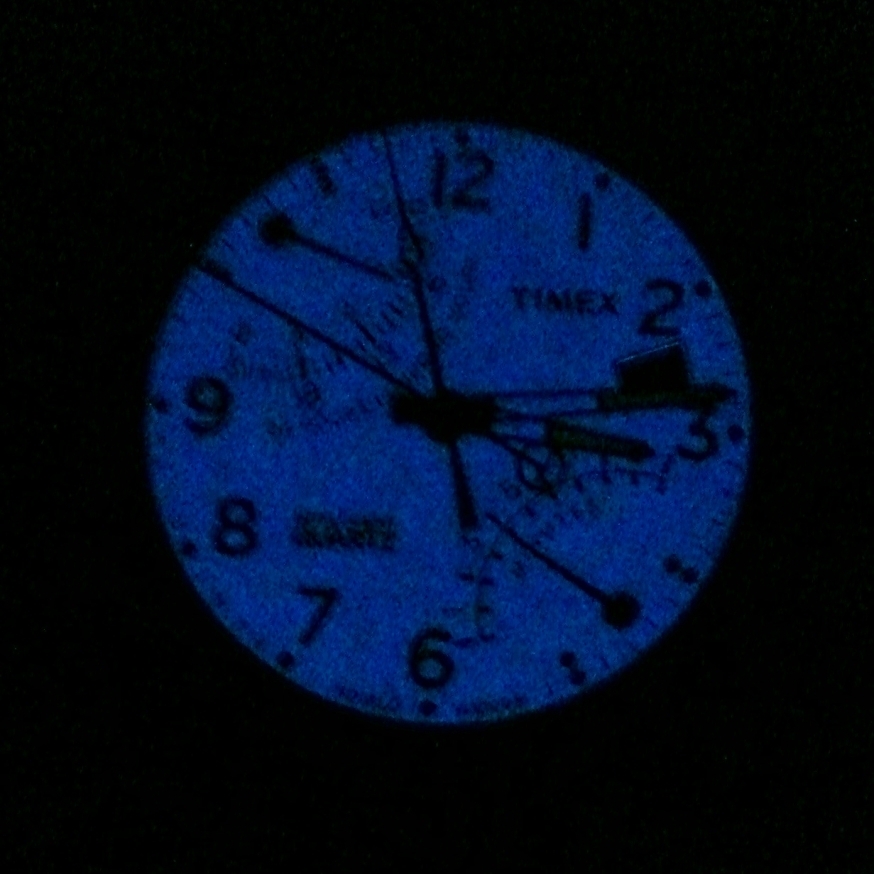 The dial is busy with the tachymeter , retrograde sub-dials, and the six hands. The constant running second hand is useful if you have a job like mine that requires you to time the infusion of medication and a patient’s pulse at the same time, but otherwise it is just like the constant running second hand on almost any mechanical watch in that it lets you know the watch is running when the chronograph isn’t. Timex did a fantastic job at coloring the markers on the watch to give it an aged tritium look while nicely blending in the hour and minute hand with white luminous paint. Timex designers even took the time to think to make the 4, 5, 10, and 11 o’clock markers double dots so they are not confused with the base of the retrograde minute and hour hands of the chronograph. The large numerals on the date wheel make it easy to read at a quick glance, which should help make it friendly to presbyopic eyes, and they don’t get lost amongst all of the other writing on the dial since the numerals are slightly different in color from everything else.

All in all this Intelligent Quartz is impressive and offers a lot of bang for the buck. At a glance, other watch collectors could mistake this as something made by Bell & Ross or IWC until they look closely at the dial. If you are a WIS, it is not embarrassing to show off this Intelligent Quartz to other collector because of its good build quality. It’s so nicely made, that many collectors might consider it too nice to use as a beater and will wear it in their normal watch rotation. As a watch collector who appreciates fine mechanical watches, the Intelligent Quartz made me to take a look at what Timex is up to and rethink what an analog quartz watch can offer.