Our first visit was to Rolex Accacia, or Rolex World Headquarters Geneva, which, as well as being the administrative hub for the firm is also where all final assembly and testing takes place. 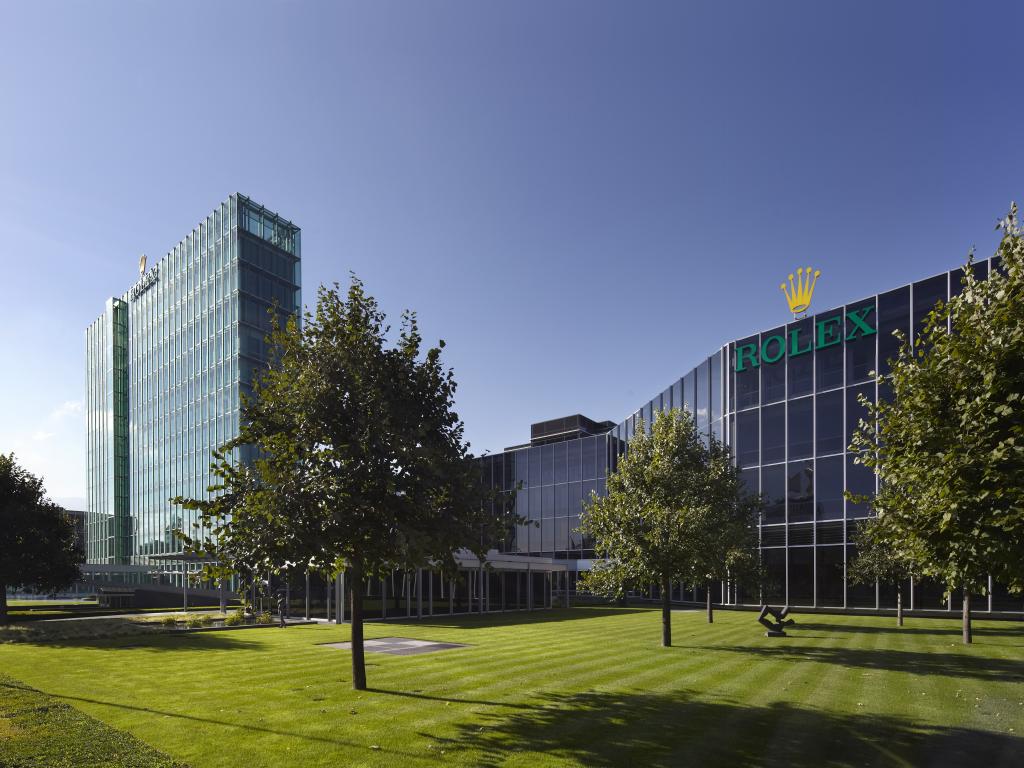 After our coats were taken, we were accompanied through the vast reception area down to a presentation theatre which arguably looked like the HQ of the villain from a James Bond film; there was a vast circular glass skylight set into the roof and when we were all seated, curved leaves, shaped like the aperture blades of a camera lens silently glided out to seal the opening so that the room was now dark enough for the presentation to begin.

This covered the history of the firm & the challenges it has taken on over the years and how it has succeeded; and then, finally, the visit could begin in earnest. Our first stop was at the movement assembly station; here ‘naked’ movements arrive from the COSC, having been delivered there from Bienne. Each production unit is an autonomous cell of nine operators, each of whom is capable all of the jobs in the group. They are given their targets at the start of the week and they decide amongst themselves who will perform which job and who will do the next. Each person is responsible for checking the work of the person who previously worked on the movement.

The first job is to fit the dial to the movement; this,like many of the tasks performed at Rolex is done with tools and machines designed (and often built) by Rolex. The actual fitting of the dial and securing the fixing screws takes literally seconds, but the subsequent inspection of the dial to remove spots of dust or marks left during the production & transport takes much longer. Once that is done, the movement goes to the adjacent station, where a colleague firstly inspects the movement and dial in great detail and then removes any dust particles that previous operators may have missed and then it is inserted into a unique device which firstly sets the hands (even though there are no hands on the watch) and a sensitive microphone listens for the ‘click’ as the date changes. This tells the machine that the movement is at midnight and so the hands can be attached. The hands are each placed on a plate, and in order, a pneumatic tip picks up firstly the hour hand, places it perfectly vertical on the centre post and repeats the procedure then with the minute hand and finally with the seconds hand. 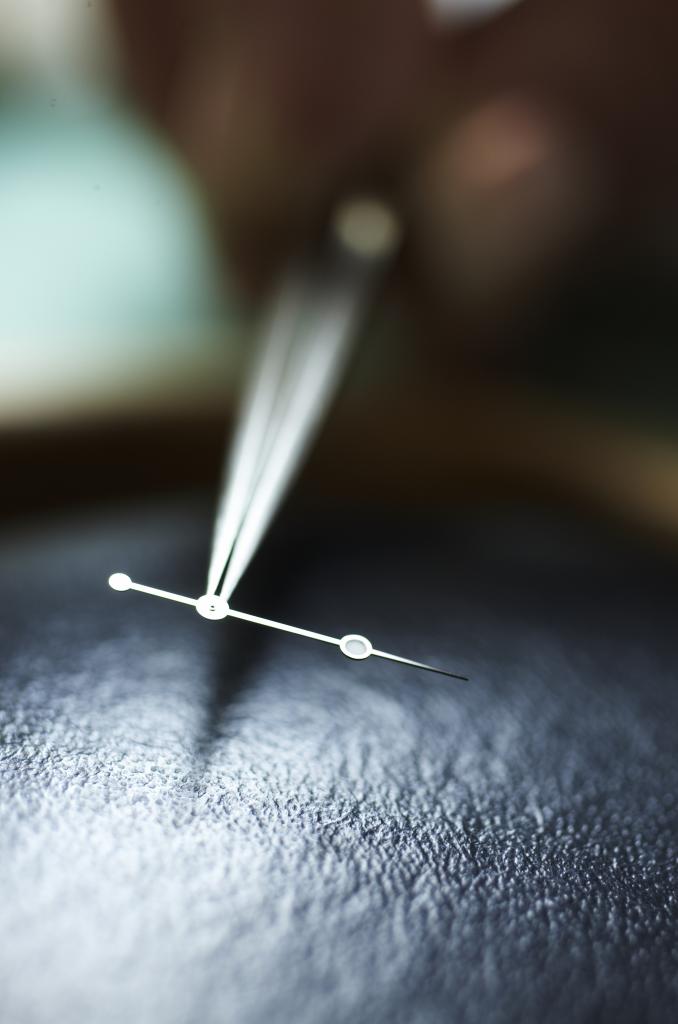 Then, once again, comes the microscopic inspection; a tool is placed atop the dial at the same level as the underside of the sapphire glass and the hands are rotated several times to make sure that they will clear the glass when they are fitted. Then they are checked to make sure that the three hands are equidistant apart and that they are parallel to the dial. Then, it is on to the casing of the movement.

With the open case inverted, the operator removes the temporary winding stem used at COSC, and then places the movement into the case, screws in the correct winding stem and crown, checks it all over again, screws in the case back loosely and passes it to the next operator.

She unscrews the back and presents the complete auto rotor assembly to the movement, using a torque-sensing screwdriver she attaches the assembly by two screws, and now it is almost a watch. 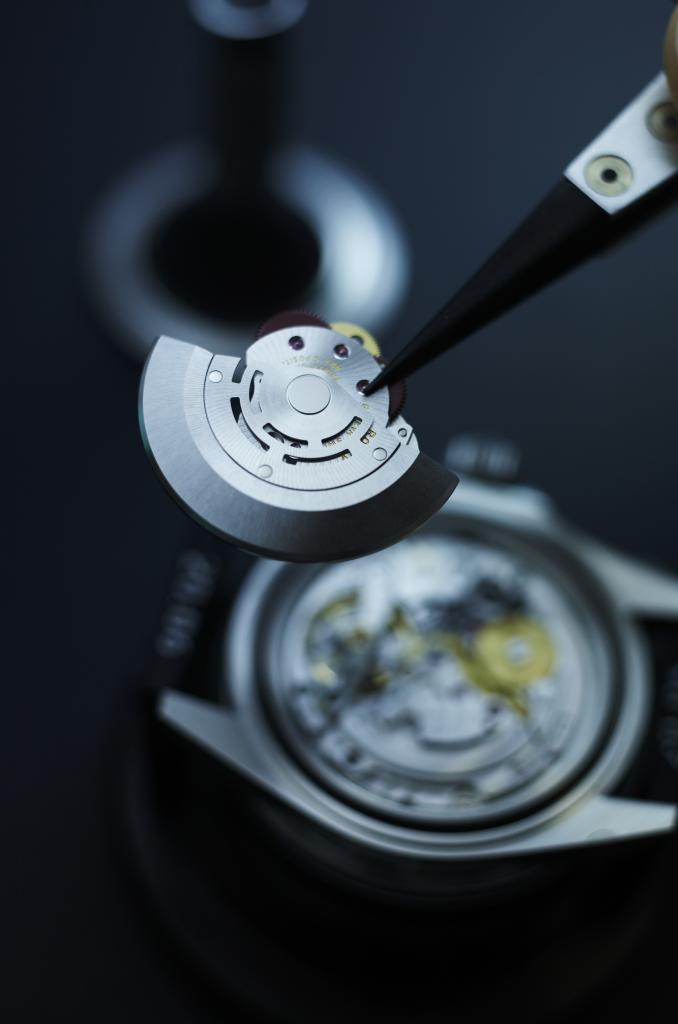 Now the final cleaning takes place, under quite high magnification every aspect of the watch is checked and then it goes to the next station where a young lady opens the back, and the movement then goes under a microscope, the rotor is moved so that the movement serial number is revealed and that is then photographed and OCR software then enters the movement number into the database. The same happens with the case serial number and now they are linked together for ‘eternity’; if the case is opened at any Rolex service centre, they will be able to call up the serial number and know instantly which movement was originally fitted. Then the back is screwed tight, once again with a torque sensitive screwdriver, which tightens it to the required 5 Newton/Meter tightness.

The waterproof testing for 90% of the watches is done on a continuous basis, but the Sea Dweller Deep Sea watches have to be tested to 5,000 meters and this requires a very special rig, built for Rolex by their long term collaborators, COMEX. 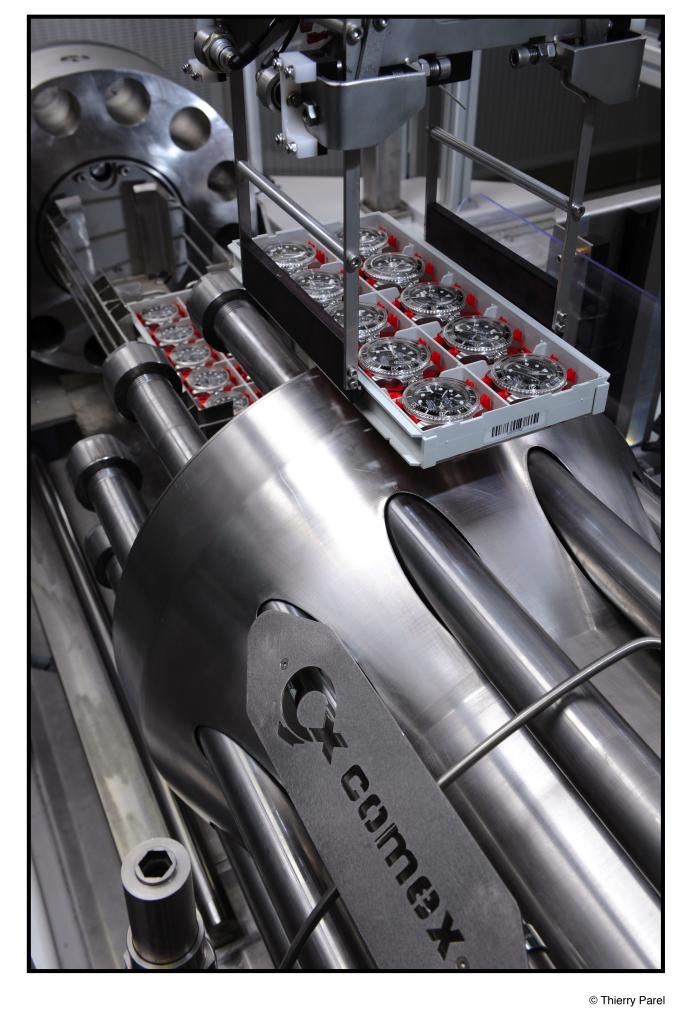 Looking like the lovechild between a bank vault and a decompression chamber, the testing device is monolithic in appearance and almost doom like in its operation. The door sliding slowly along those huge steel rods closes the chamber, then the circular black seal rotates and the device is ready for operation.

The testing for all the other Oyster Perpetual watches takes place over a period of a couple of days. They arrive at the testing station still in their box of ten; this is then placed on a rack and left for a day, the purpose of this is to ensure that there is no power at all left in the mainspring. 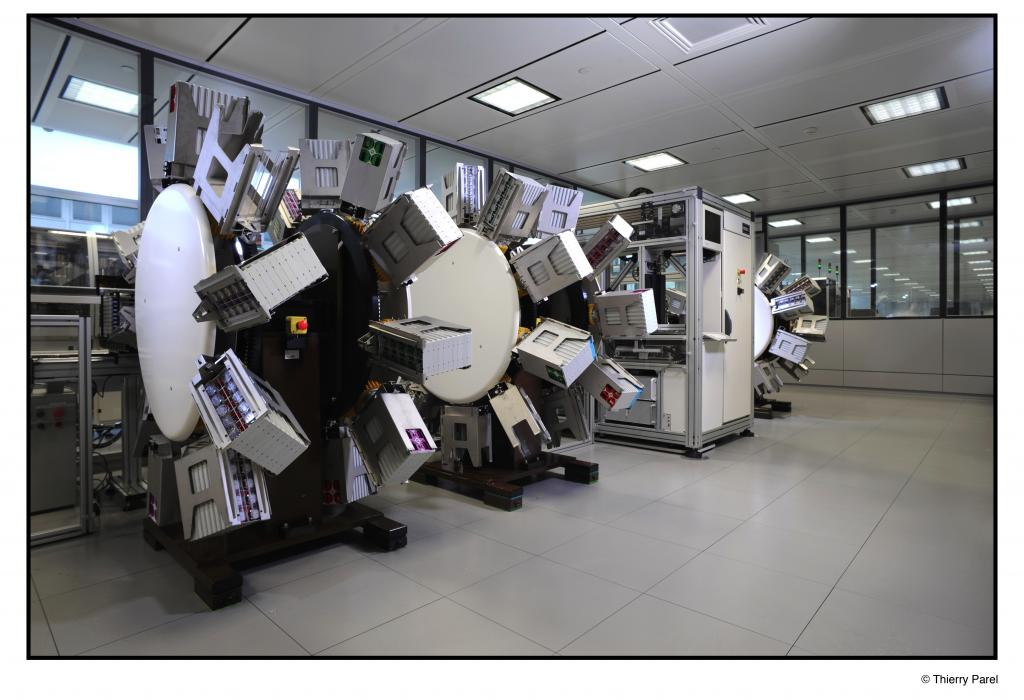 Then they are placed in the ‘arms’ of the machine seen above on the left, it is switched on and the ‘arms’ move in all three dimensions at varying speeds and acceleration for exactly twenty seven minutes. This timing is designed to give the watch enough energy to operate for more than 24 hours. The trays are then unloaded on to the rectangular cabinet seen at the right. As they are loaded, a scanner reads the bar code on the box and a camera takes a photograph of the faces of the watches and then they are silently lowered to a waiting area. Twenty-three hours and fifty something minutes later they are retrieved and exactly 24 hours after they were first photographed, they have their picture taken once more. Software superimposes the two images one above the other and if the images do not coincide because either a watch has stopped or has errant timekeeping, then a red light flashes, a buzzer sounds and the relevant tray is removed and the offending watch goes back to the assembly station to be checked and remedied.

The non diver watches are tested for impermeability by placing them in a pressurized tank of water and then heating the case and rapidly cooling it to encourage any water which might have entered the case to condense on the underside of the crystal. The failure rate here is less than 1 in 1,000 watches.

The final step is the fitting of the bracelet, printing and attaching the tag with the watch details as well as the Rolex Chronometer tag and then placing the final product in its specifically designed shipping container.

So now we have reached the end of the road for a watch at Rolex, soon it will be on its way to a retailer and then on to the proud new owner. But it is not the end of the story for us; not by any sense of the word.