The Differences Between Applied and Embossed Numerals by PAUL DELURY

The Differences Between Applied and Embossed Numerals

Recently there was a discussion thread on the forum showing watches with applied numerals. Some of the watches shown actually had embossed numerals and there is sometimes confusion over these two types of markers. The info below will give some idea of how they can be differentiated.

Applied markers are separate pieces attached to the dial, generally via feet on the back of the markers/numerals which pass through holes in the dial. These feet are affixed on the back of the dial. The protruding feet are ground down flush with the dial so they don’t interfere with movement clearance. As the applied markers are separate pieces and are applied after the dial finish has been applied there will be a sharply defined change from dial to marker, and the angle between them will often be 90% or close to it. There will often be a clear demarcation line visible.

Below are front & rear views of applied numerals on a couple of Hamilton pocket watch dials. 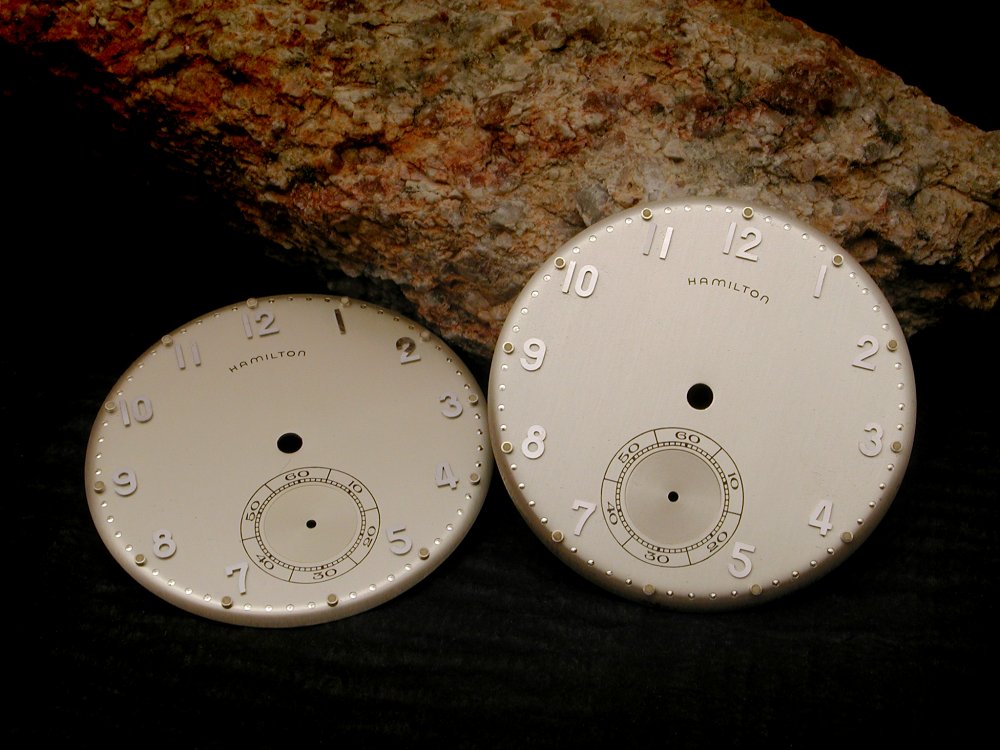 You can see on the rear view of the dials where the marker feet have been affixed. (The large feet showing are the dial feet that allow the dial to be secured to the movement). 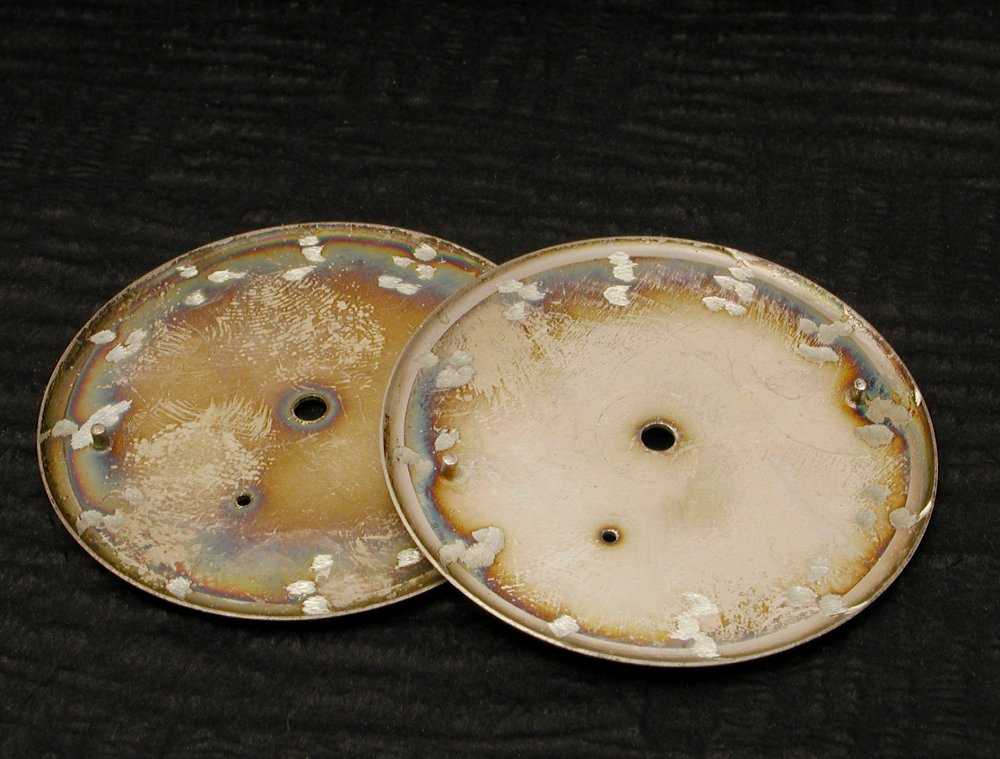 Here’s a closer look at those applied numerals. (Note that the little luminous makers are also applied on these dials). 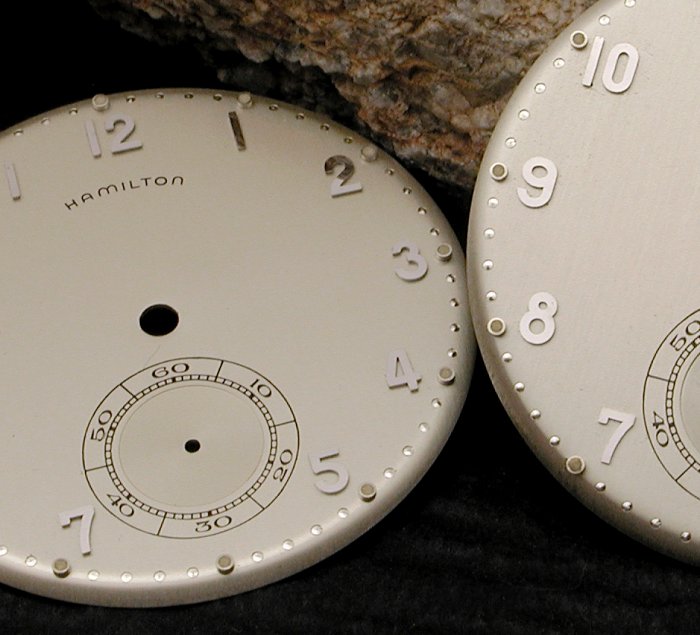 Embossed markers on the other-hand are a formed part of the dial blank material, not separate pieces. They have been formed by pressure, (or even moulding in some cases). In general the dial is stamped and the raised portions form the markers and any other features/patterns that the dial design calls for. The raised portions of the markers are often painted/plated in a different colour/material. The difference in appearance to applied markers depends upon the relief height and sharpness of the transition from marker to dial. Some dials are sharper than others. Generally embossed markers or numerals will not be as high nor as sharply defined as applied markers. The top and bottom edges will not be as sharp – tending more to rounded corners. This is due to the process of embossing/stamping which will generally leave radiused rather than completely sharp edges. Additionally, as the embossed markers are part of the dial they are present when the finish is applied to the dial. Often, the dial paint will reach some way up the sides of the markers which is in marked contrast to applied markers. Conversely, any paint or plating applied to the embossed markers will not reach right down to the dial. The transition from marker to dial will not be as sharply defined as with applied markers. This can generally be seen with the naked eye and becomes very obvious in most cases under even low magnification.

Below is an example of embossed numerals on two Waltham watches. The one of the left has higher relief to the embossing. 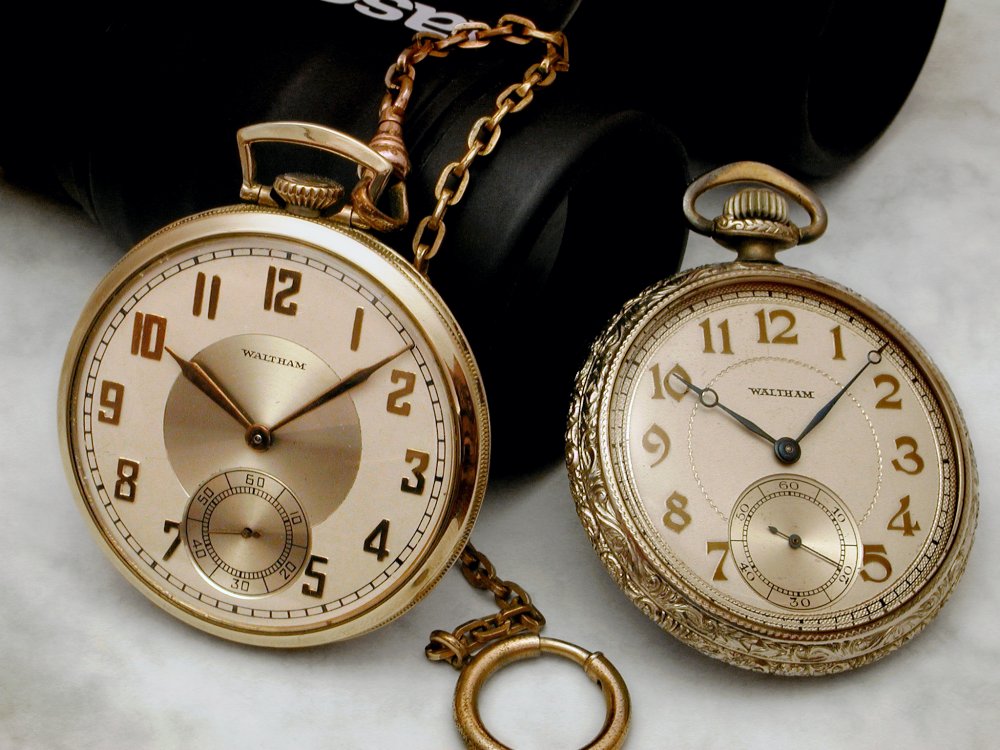 Below is a close-up pic of an embossed numeral from a Waltham dial very similar to the one shown above on the left. You can see the rounded form and the way the edges are not distinct. You can also see here how the edge of the numeral has been machined away when the subseconds dial was cut. 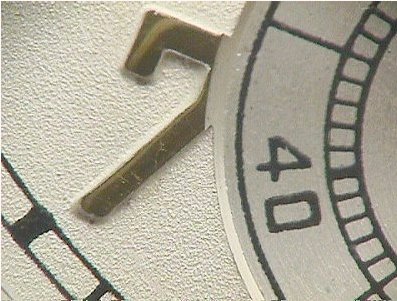