In the beginning, there was red and blue. From its launch in 1955, the Rolex GMT-Master emerged as a convenient travel watch with smashing good looks. It had a rotating 24-hour red and blue bezel, and an additional hand that circled the dial once every 24 hours. Developed during the “Golden Age of Travel” in cooperation with Pan Am pilots, the GMT-Master became the Official Timepiece of Pan American World Airways. Pilots and globetrotters, alike, could easily read the time in two timezones simultaneously during intercontinental flights. 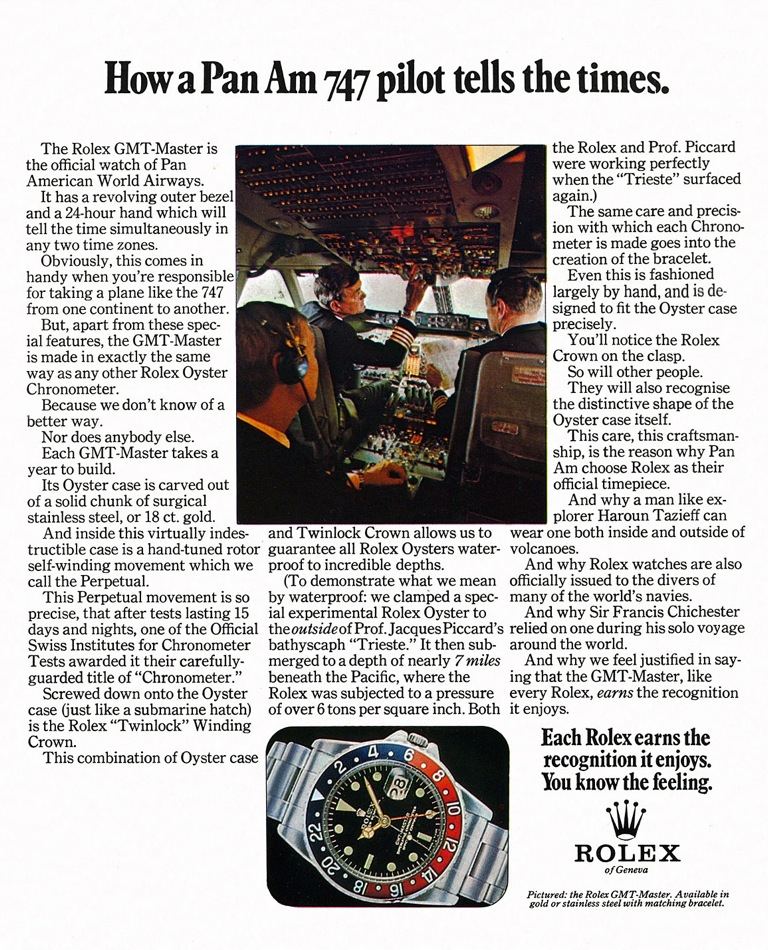 The first GMT-Master bezel inserts were made of transparent Plexiglas, painted half red and half blue on the underside. This method of production gave a certain depth to the bezel, as the colours showed through the Plexiglas.

In 1959, still in the original two colours, the Plexiglas insert was replaced by one in anodised aluminium once the manufacture of a two-colour insert in this material had been mastered. Various other combinations were introduced later, such as brown and gold on Rolesor (steel and gold) models, or burgundy and black on the GMT-Master II launched in 1982. But in the minds of many GMT-Master aficionados, a red and blue bezel remains the signature feature of this model.

Then in 2005, Rolex developed and patented a new high-performance ceramic element for its bezel, as well as patented the complex process of manufacturing this element. Crafting a Cerachrom bezel begins by mixing basic ceramic powders made of very fine zirconium dioxide or aluminium oxide powder. The powders are mixed with pigments and a binding agent. The resulting paste is shaped into a bezel blank by high-pressure moulding. A first stage heat treatment eliminates the binding agent.

Next, the substrate is impregnated with a metalised chemical solution. The insert is then superheated to 1600° to fuse the particles together and create one solid piece. During the process, the insert shrinks nearly 25% and the final colour is revealed.

Since the ceramic is so hard, the inner and outer circumferences of the insert must be precision-machined using diamond tools. Then, the bezel numerals and graduations are engraved deep into the ceramic. The engraving depth is precisely controlled and executed down to nanometers, enabling exact adherence to a defined relief height.

After the ceramic mix is superheated to 1600°, the bezel numerals & graduations are engraved deep into the ceramic

For the original Cerachrom bezel, the entire bezel was then bombarded with a thin layer of yellow gold during a patented PVD process. The gold was then diamond polished until only the metal on the numerals and graduations remained. The result was an extremely hard ceramic bezel with exceptional scratch and corrosion resistant properties. In 2005, the GMT-Master II was the first model in the Oyster collection with a Cerachrom bezel and was manufactured in a uniform black colour. Over the years, Rolex extended the Cerachrom bezel insert to its Submariner and Yacht-Master models, and produced the insert in either black, blue or green.

Then, last year Rolex introduced its blue and black (“Batman”) GMT 116710BLNR in steel. It was a world first single ceramic bezel in two colours. This year, Rolex pushed its technical achievements further by not only achieving the red colour for its signature bezel, but also modifying the chemical composition of its ceramic mix to change the colour of half its ceramic insert from red to blue.

The result of the single-piece Cerachrom insert is red for the hours between 6 am and 6 pm, with a clear demarcation of blue for the hours between 6 pm and 6 am. For the Pepsi GMT 116719, the entire bezel is coated with a one-micron-thick layer of platinum by way of a patented PVD process. The platinum is then diamond-polished until only the platinum inside the numerals and graduations remains. Remarkably, the polished lustre of the red and blue Cerachrom achieves the same glossy, watery feel as its Plexiglas forebear. The polished surfaces, contrasted by the depth and matte finish of the platinum, create a three-dimensional effect for optimal legibility. 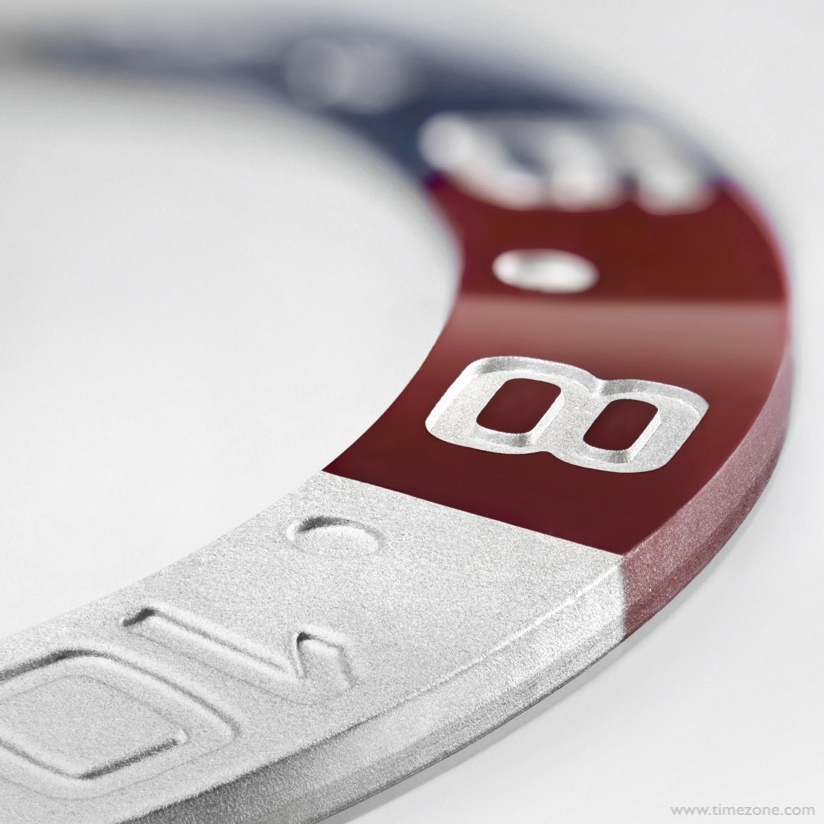 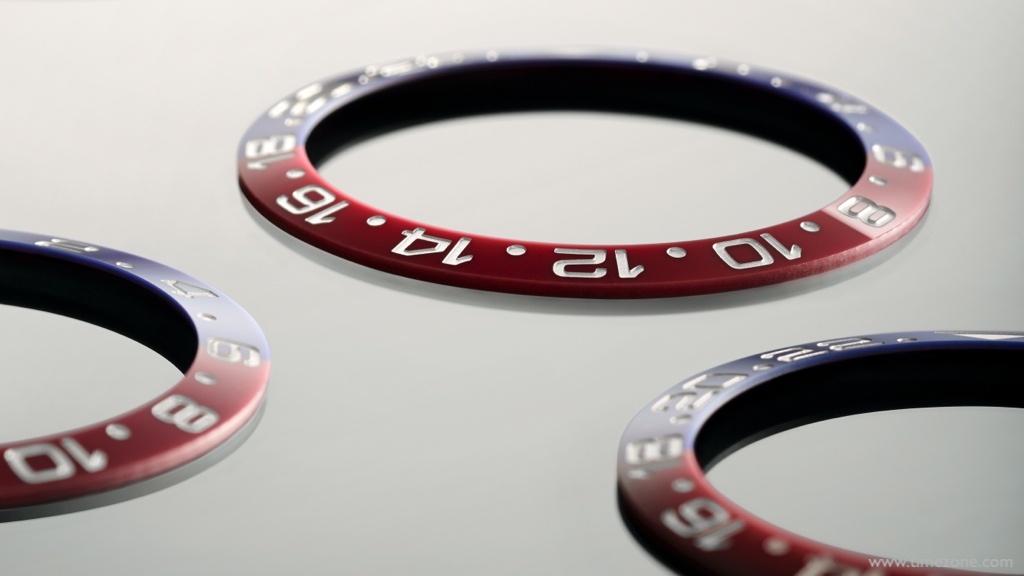 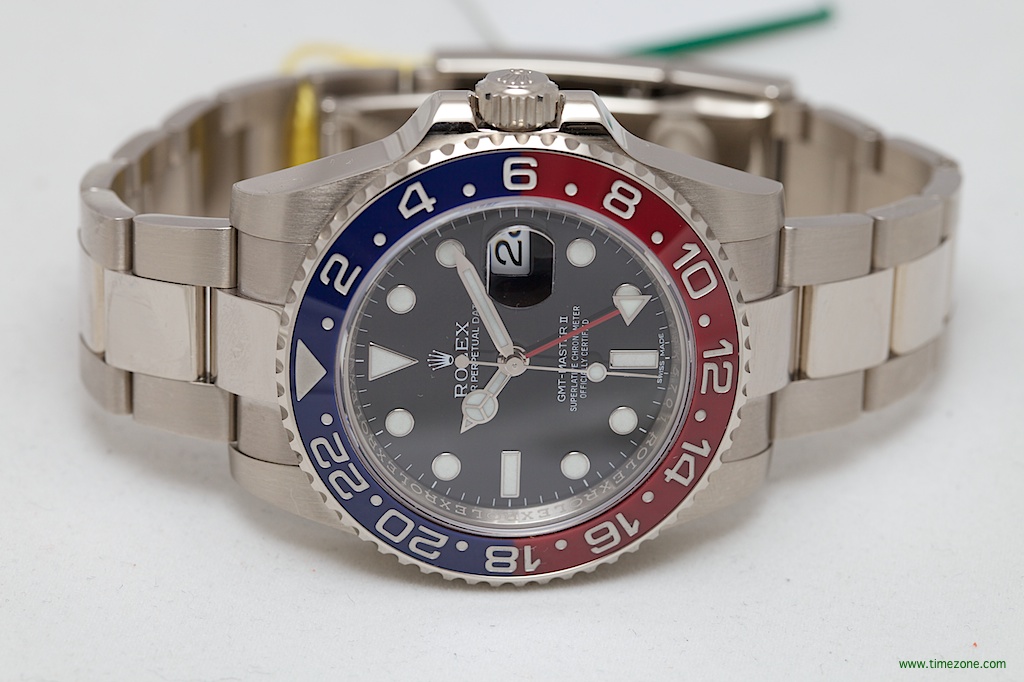 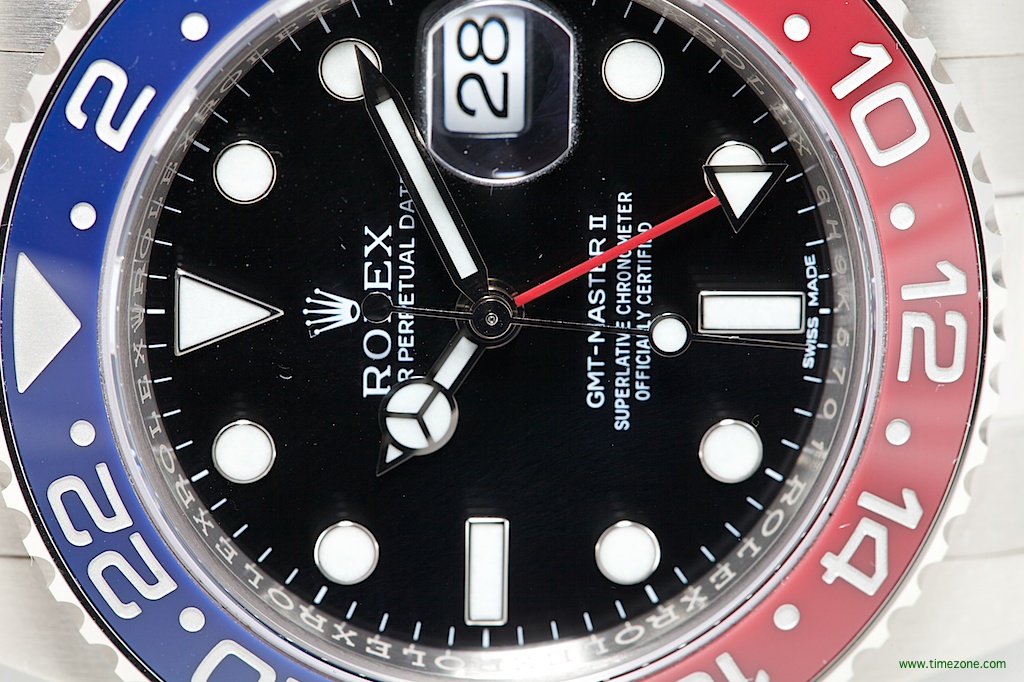 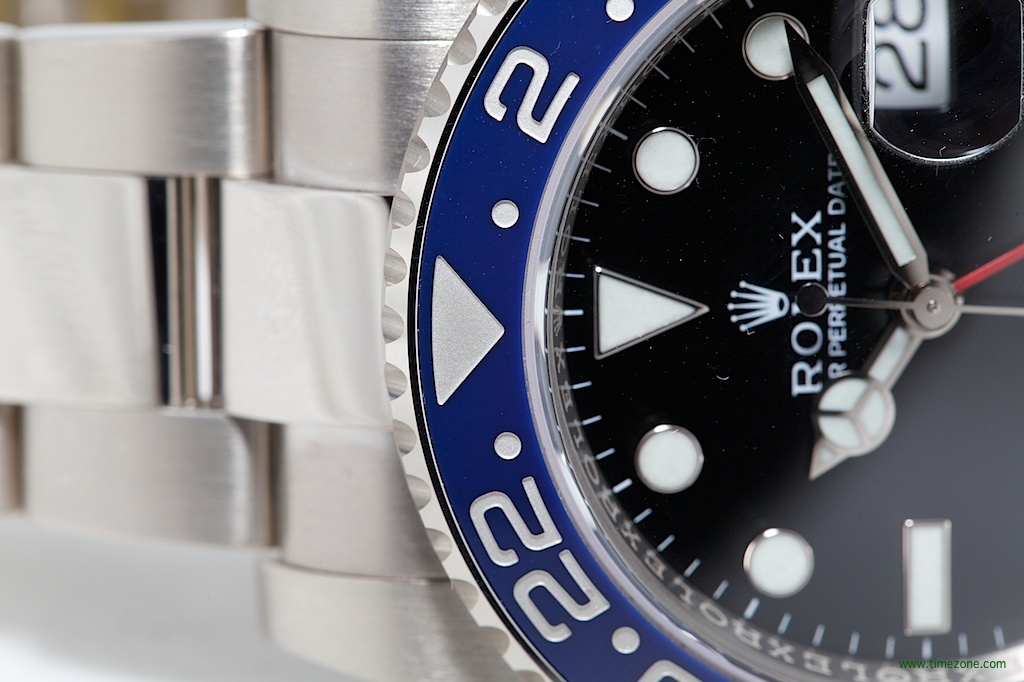 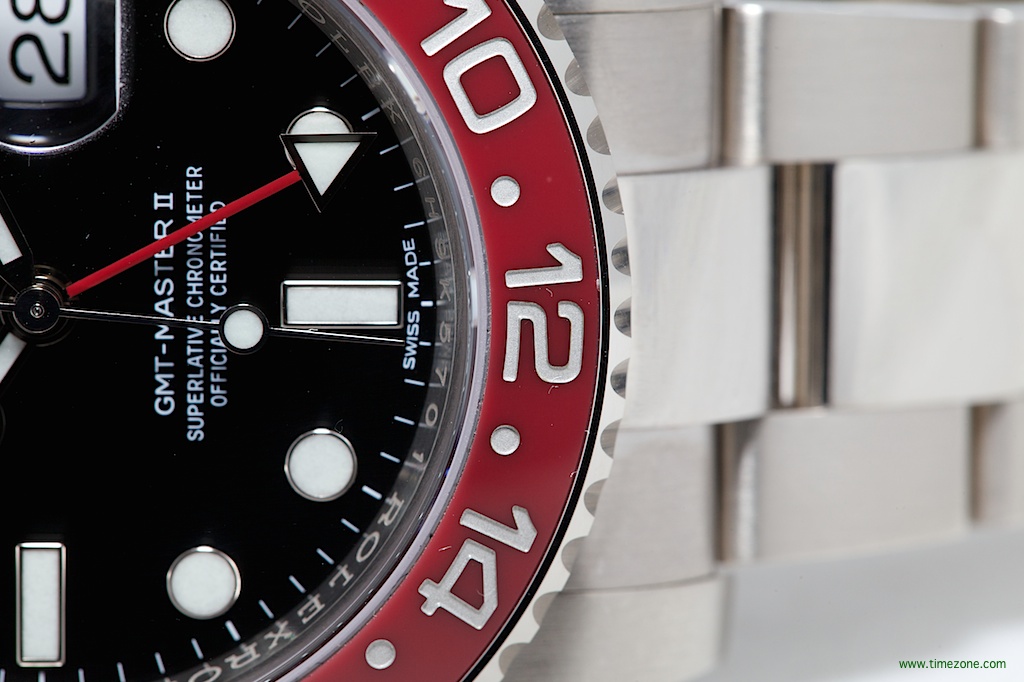 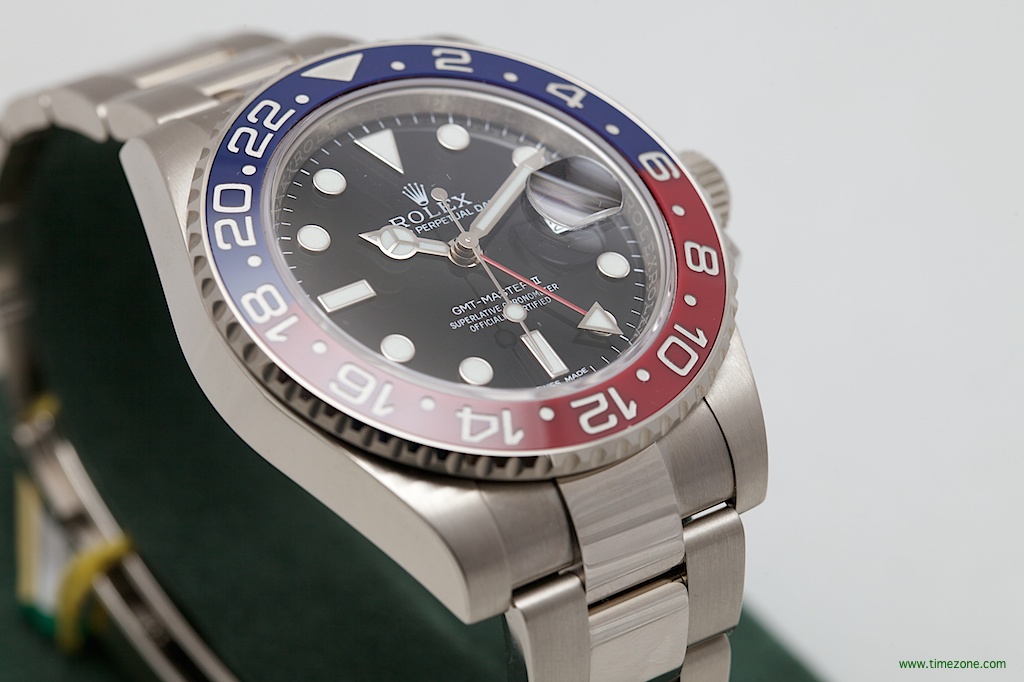 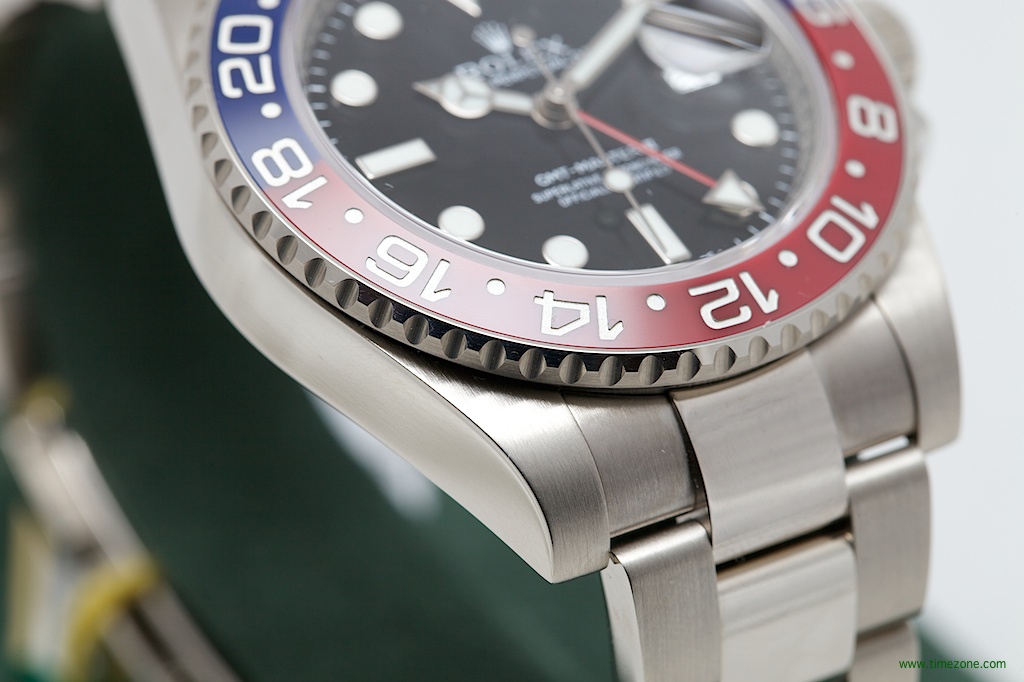 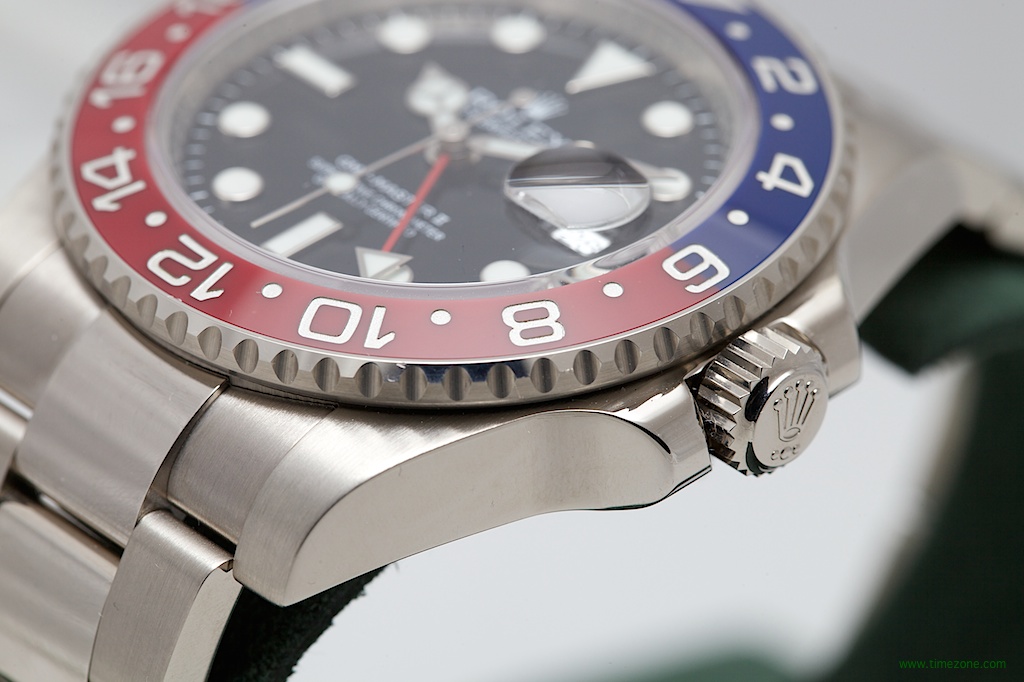 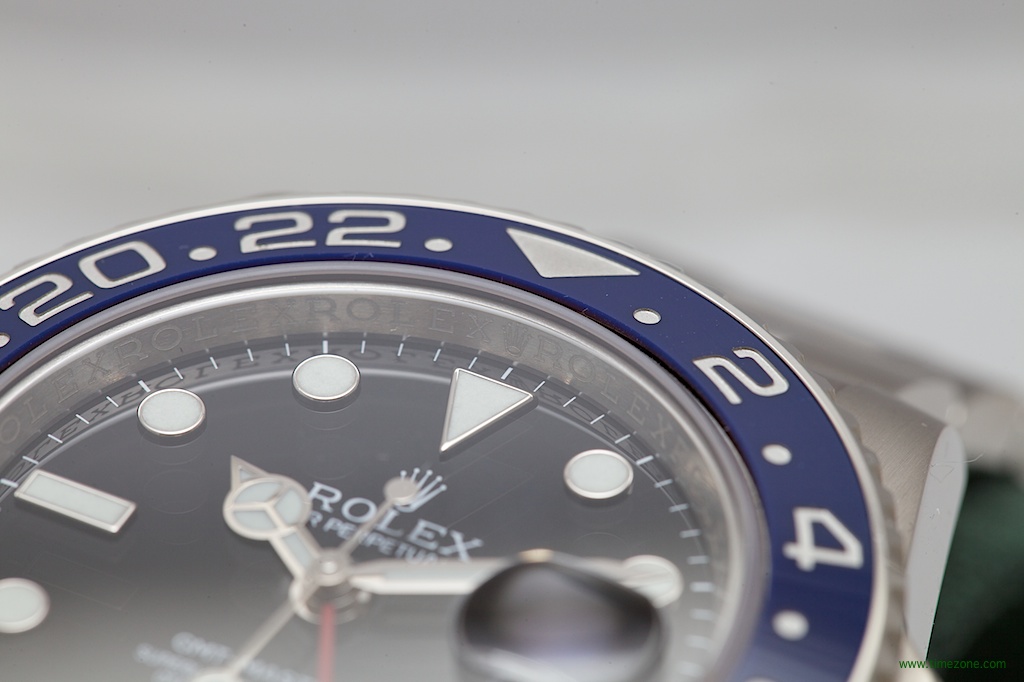 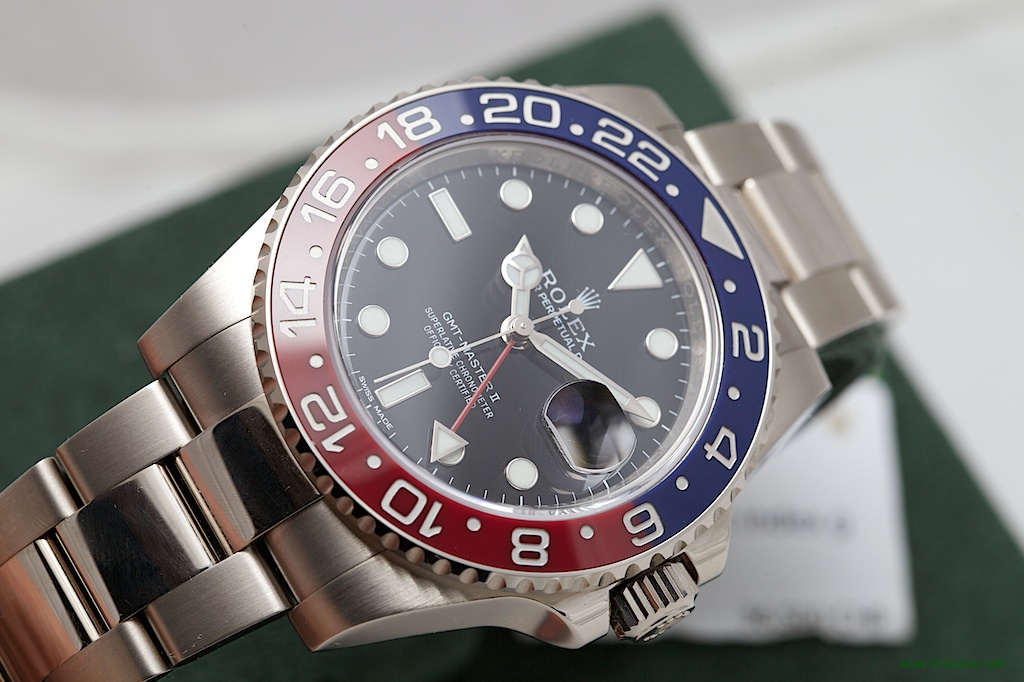 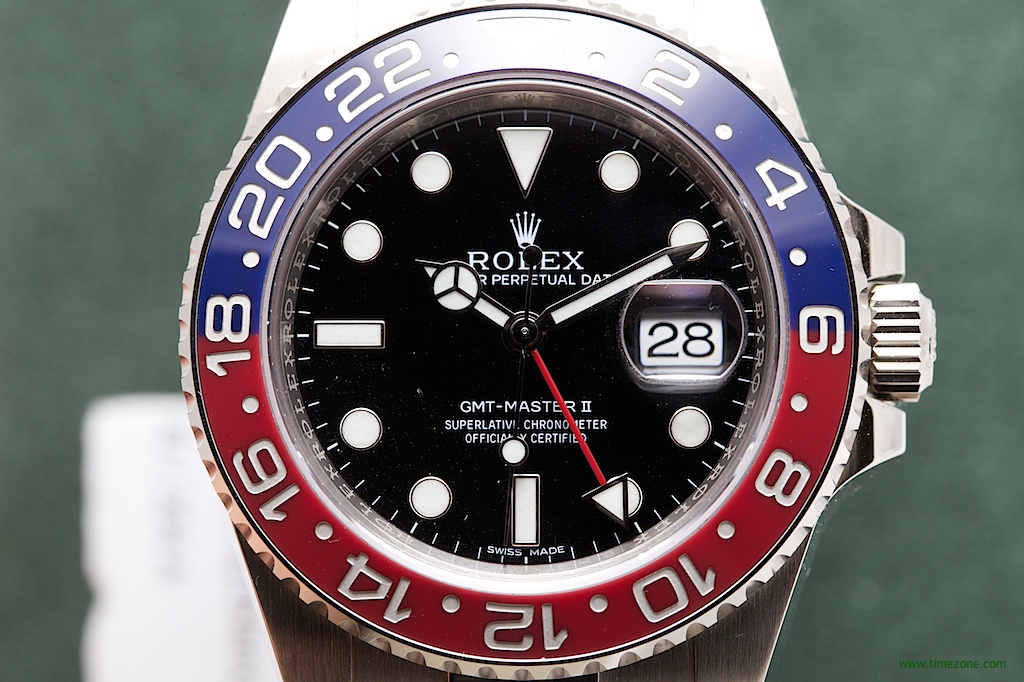