At Basel, Christophe Claret officially launched two new watches, the Margot and the Maestoso. Margot is the brand’s first ladies timepiece with a “He loves me, he loves me not” complication of a daisy petal and sentiments window. Maestoso is an impressive technical accomplishment that reinterprets a self-starting detent escapement with constant force into an ultra-modern wristwatch.

Margot is a remarkable timepiece with a blue mother-of-pearl outer dial that frames a three dimensional inner dial of daisy petals. The pusher at 2 o’clock causes a petal or two to disappear in random sequence in a game of “He loves me, he loves me not”. For more live photos and a video of the Margot, please see this earlier post. 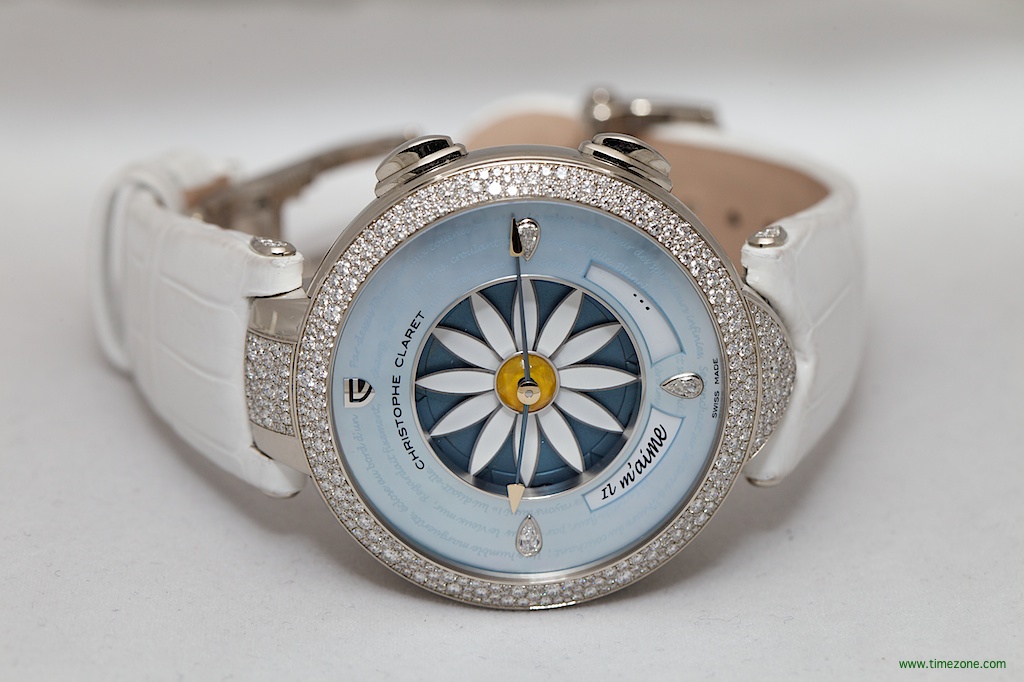 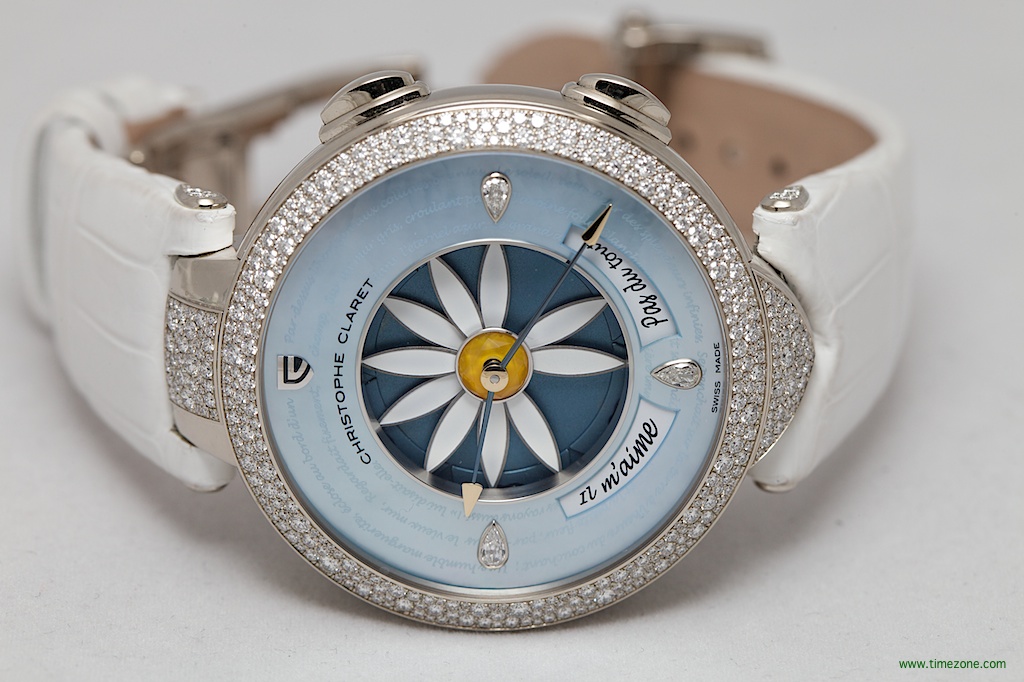 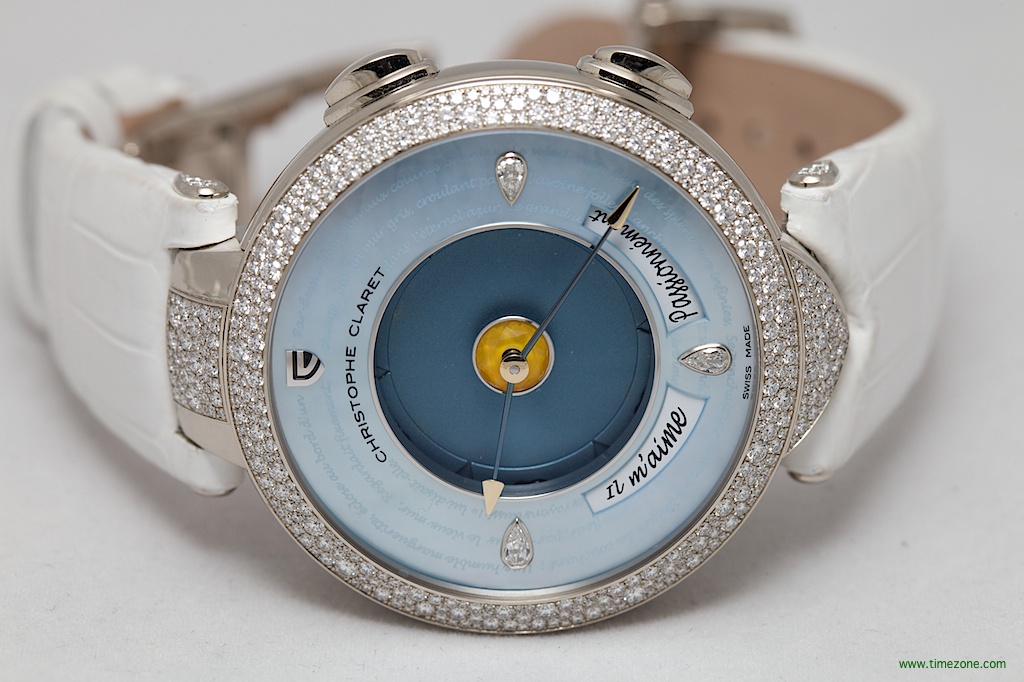 Next, inspired by the traditional 18th century marine chronometers used to determine a ship’s exact geographical position at sea, the Maestoso features a self-starting, pivoted-detent escapement with constant force reinterpreted and optimised in a wristwatch.

Historically, this type of high-precision regulator was used in a marine chronometer that was mounted on gimbals so that it remained horizontal and undisturbed by the motion of a ship. Although the scientific instrument proved to be extremely accurate, the pivoted-detent escapement had two vulnerabilities. First, the slightest shock could cause it to stop or even release the escape wheel and break. Second, vibrations could cause overbanking; that is, even setting the time could create too much energy such that the balance wheel would oscillate with excess amplitude and speed up the escapement wheel. 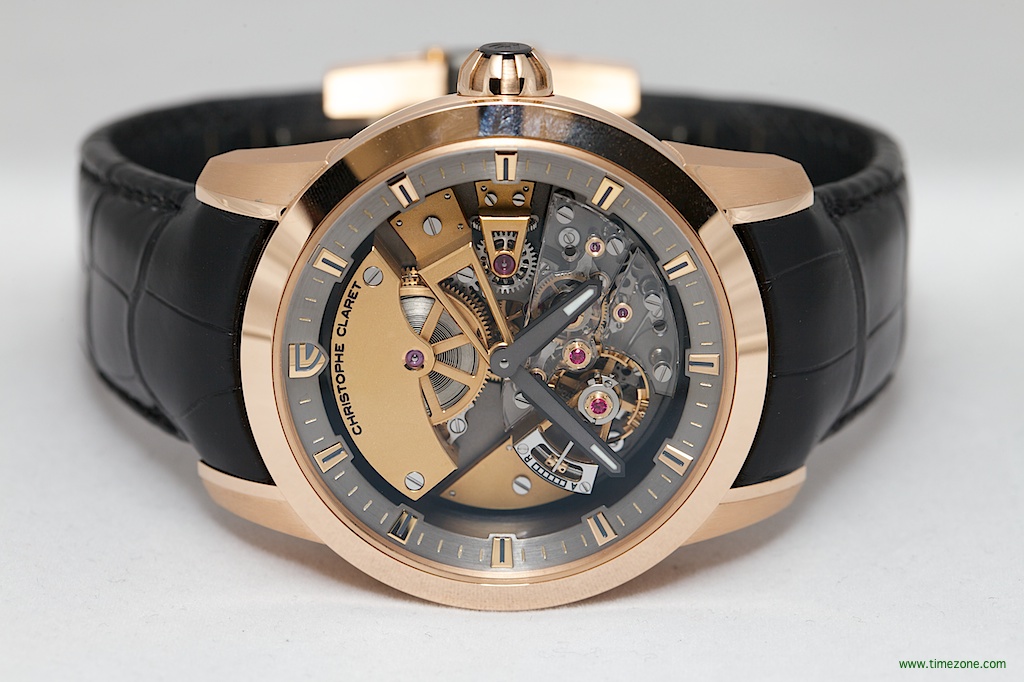 Determined to integrate a traditional and long detent in a wristwatch, Christophe Claret spent seven years of research and development to arrive at three innovative and patented systems for the Maestoso. First, to prevent the detent from turning over, Christophe Claret integrated an anti-pivot cam to the spring balance that works in conjunction with the safety finger. The ensemble is fitted between a mainplate and two sapphire bridges, and pivots on a ball bearing that distributes the load on the escapement. The mechanism absorbs impacts by means of a spring that also provides the requisite flexibility. 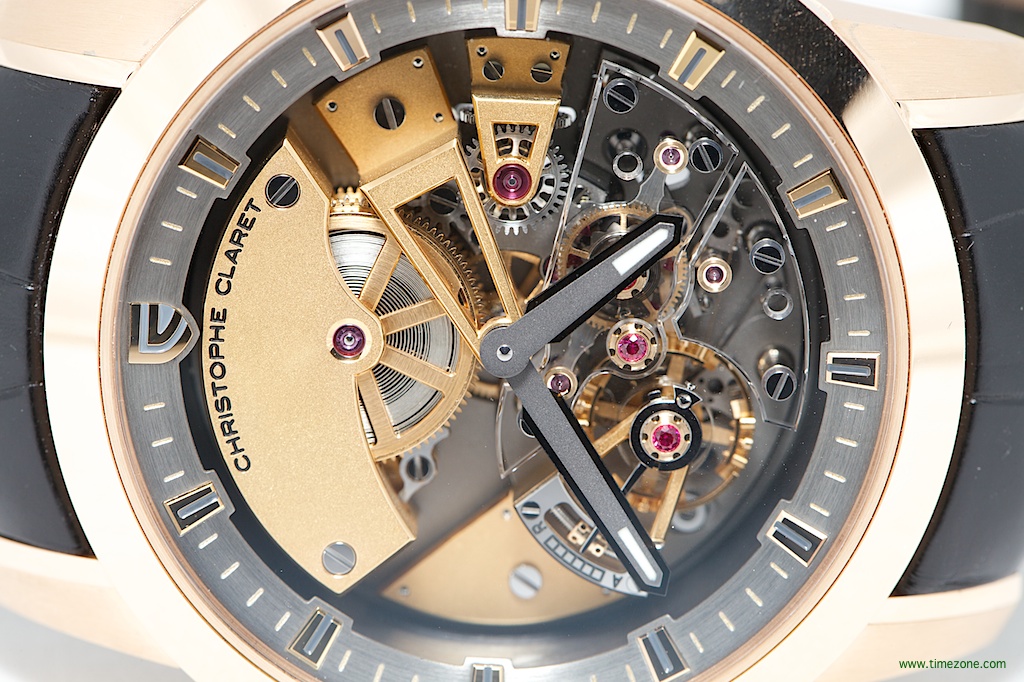 Next, to prevent overbanking, Christophe Claret developed a flexible thrust bearing fitted on the wheel and connected to the balance that absorbs any excess energy. Christophe Claret also utilised a constant force spring to guarantee stable energy and amplitude throughout the power reserve. Once the barrel is wound up, it always releases the same energy at regular intervals, making the torque to the escapement more constant. Finally, a patented stop seconds device stops the balance when setting the time.

In addition to these three inventions, the Maestoso features a patented micrometric worm screw on the regulator. Visible at 8 o’clock, the mechanism is used to regulate the timing rate and combines performance with design. 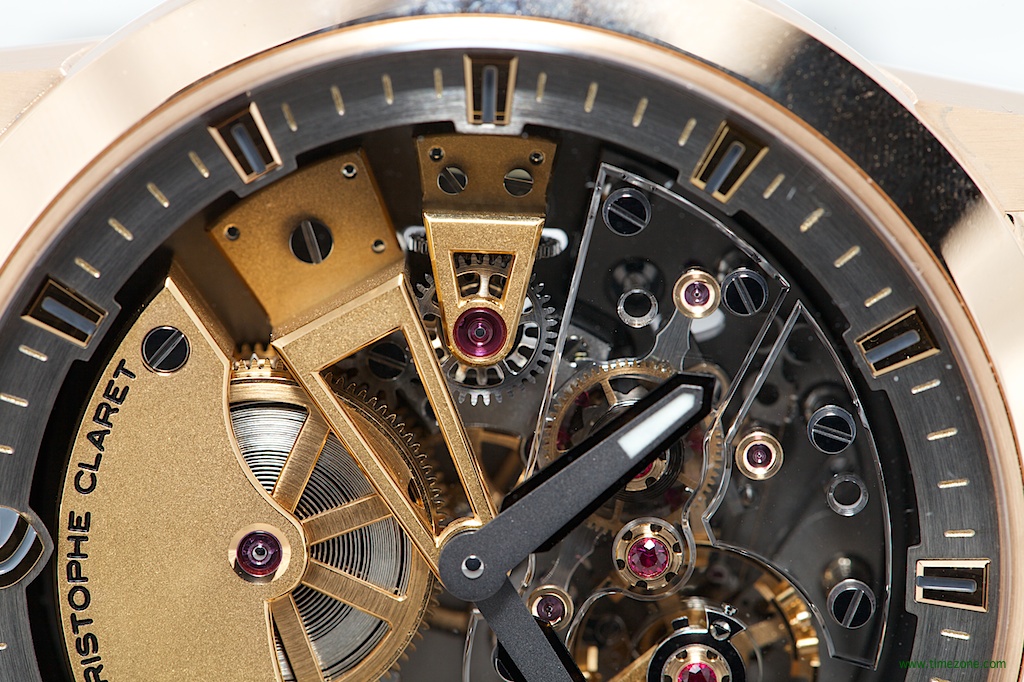 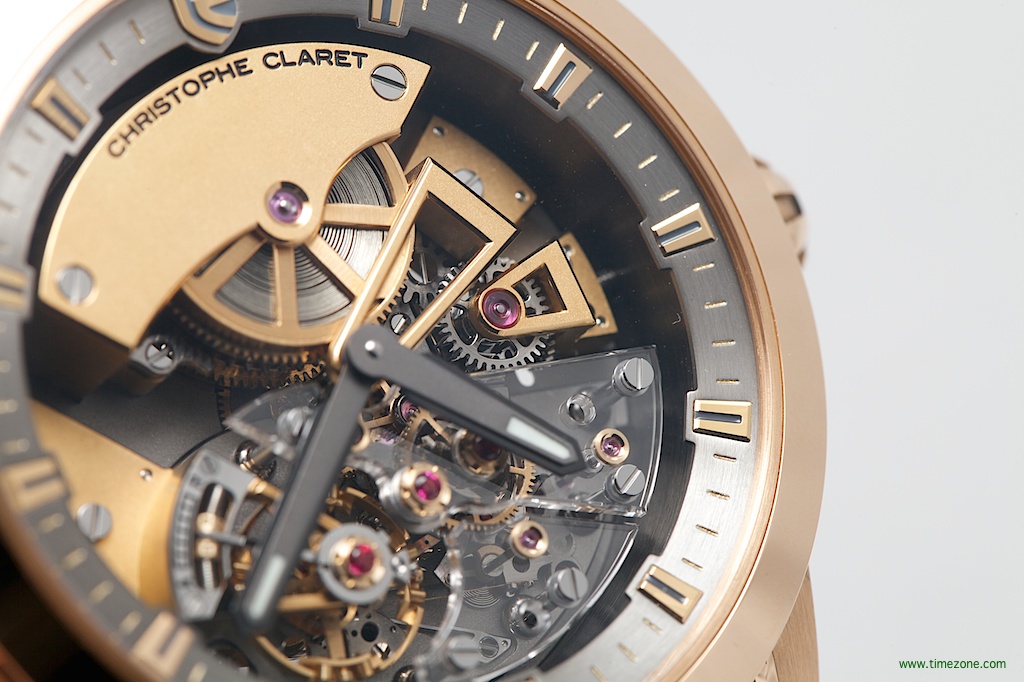 The constant force mechanism is located at 4 o’clock 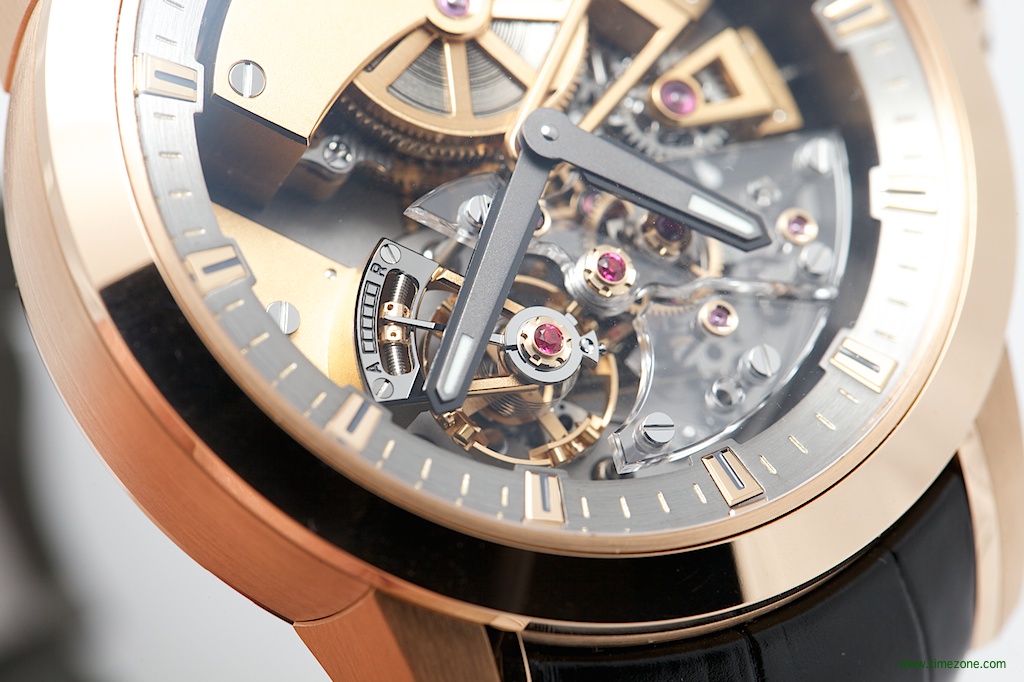 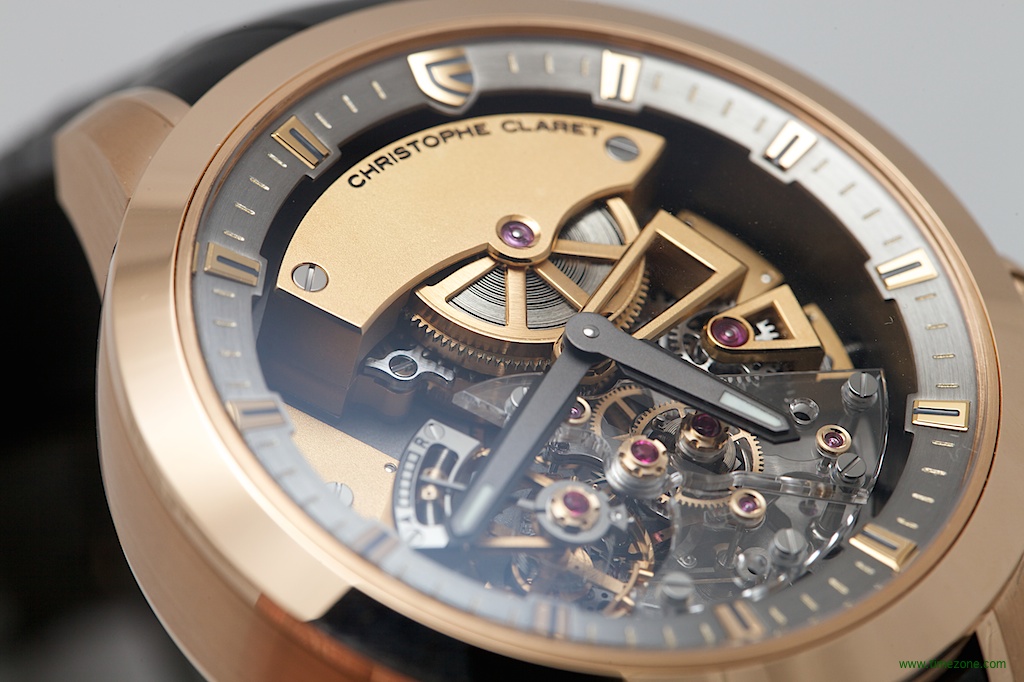 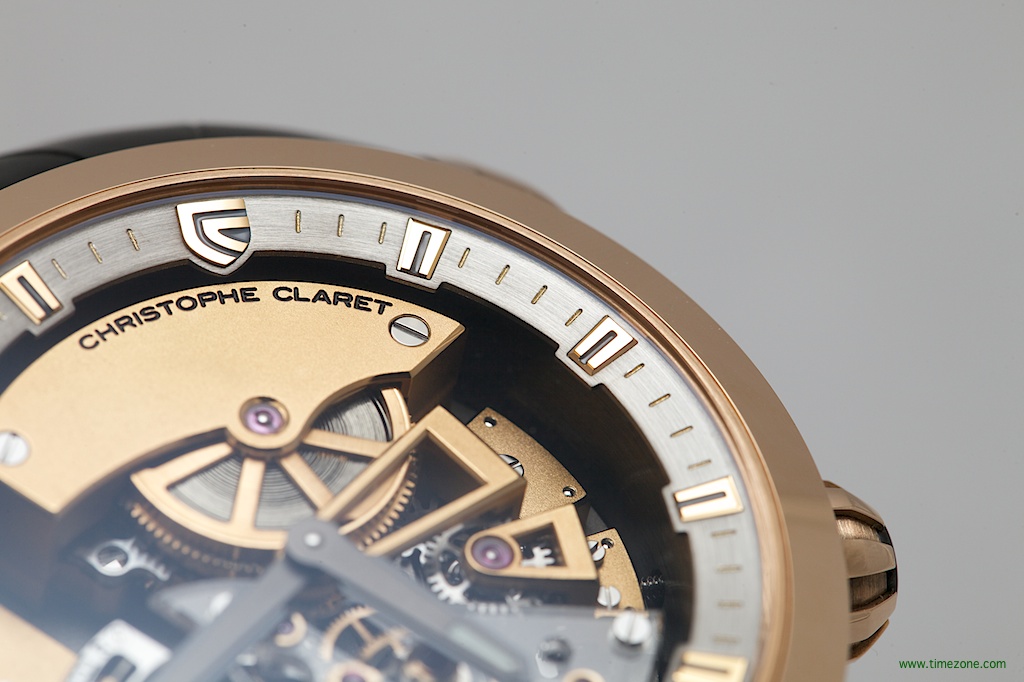 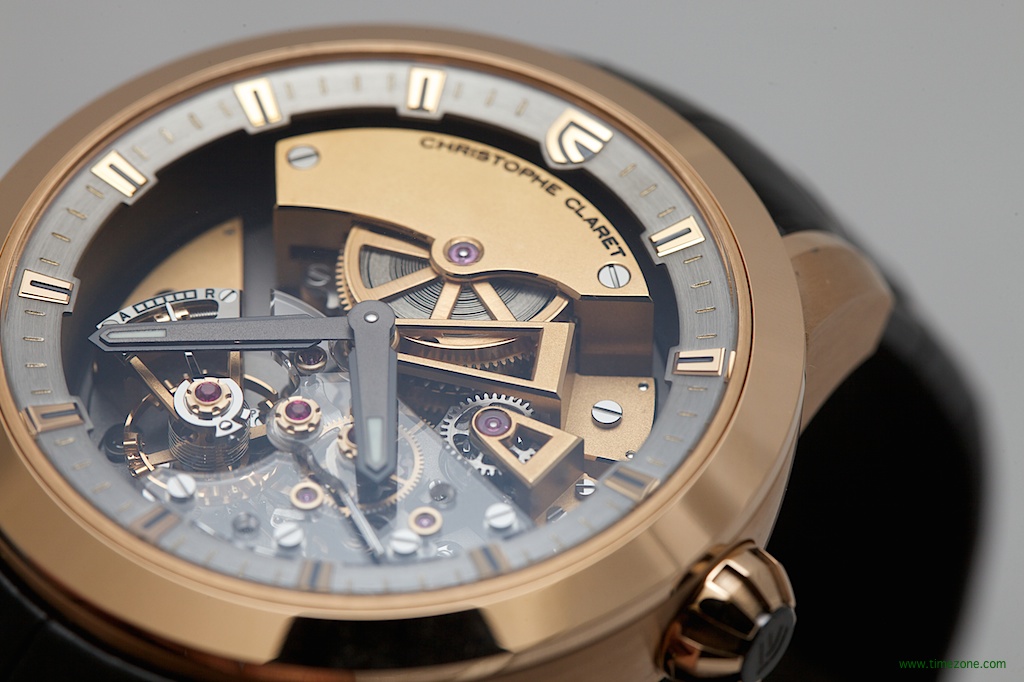 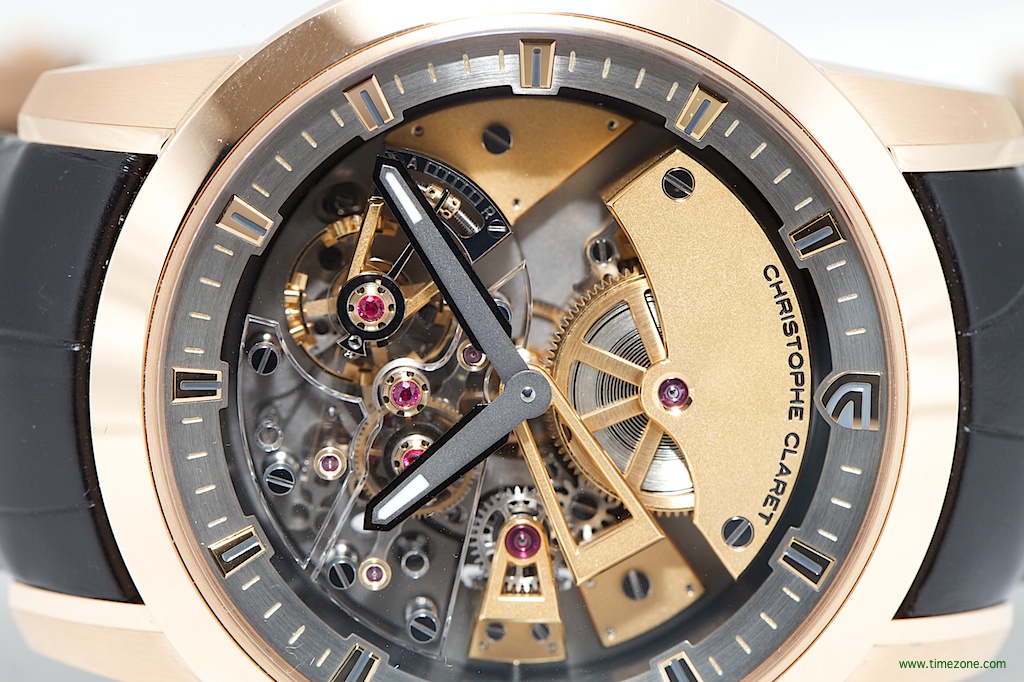 The pivoted-detent escapement is mounted on a shock-absorbing bridge 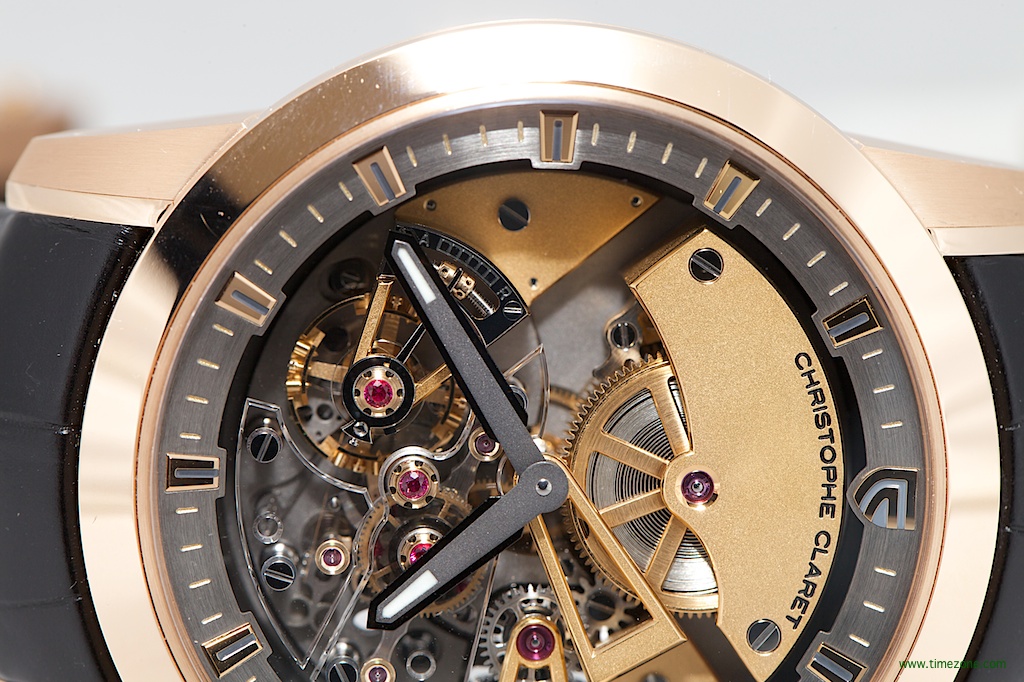 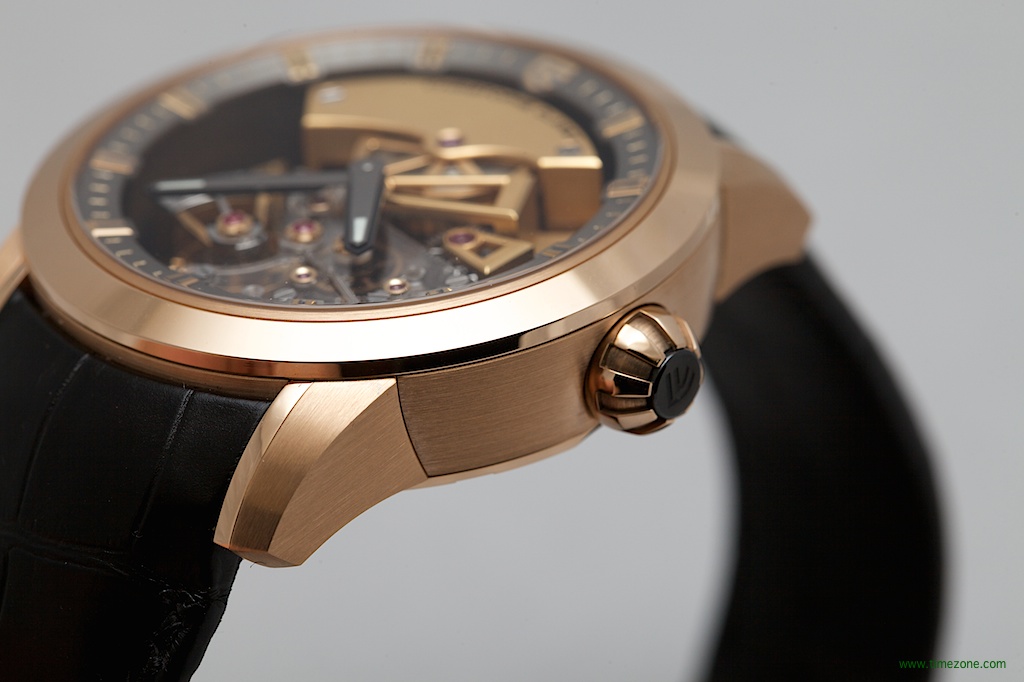 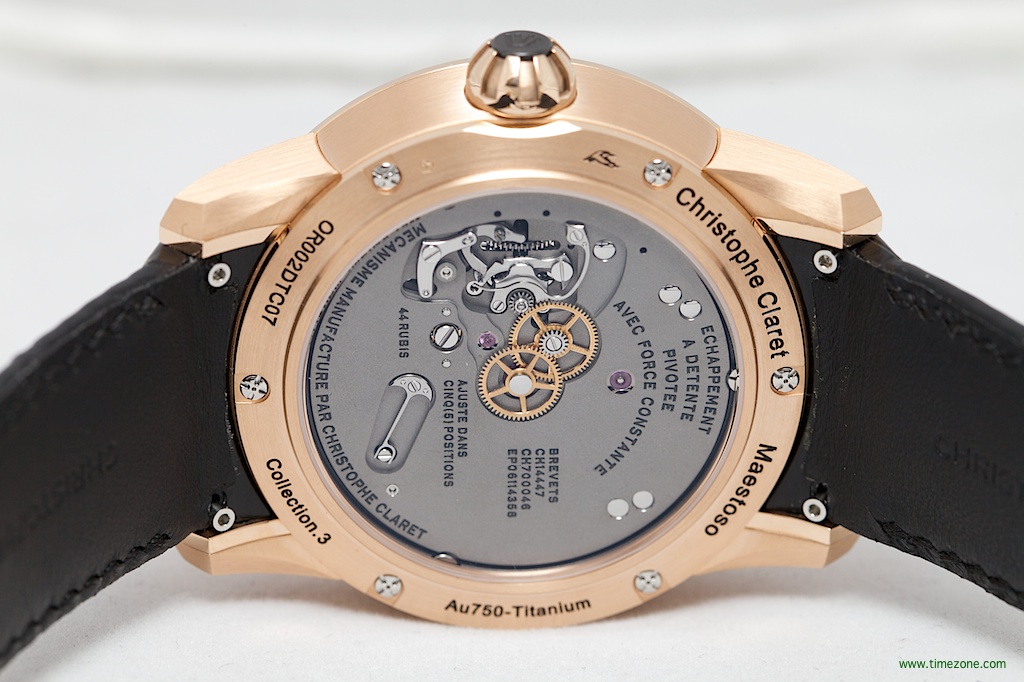 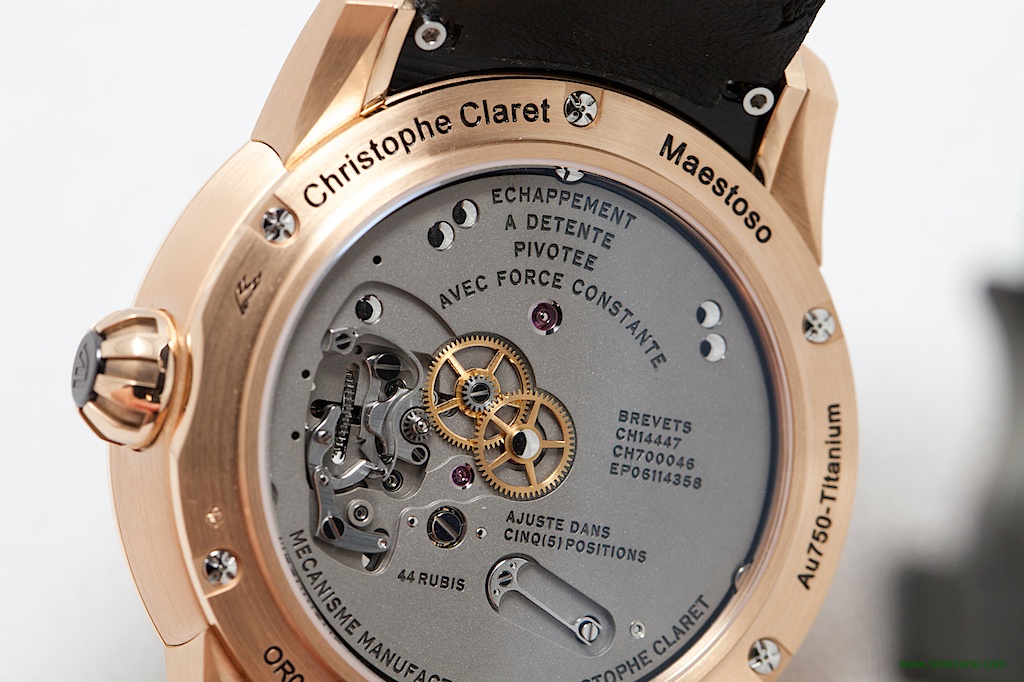 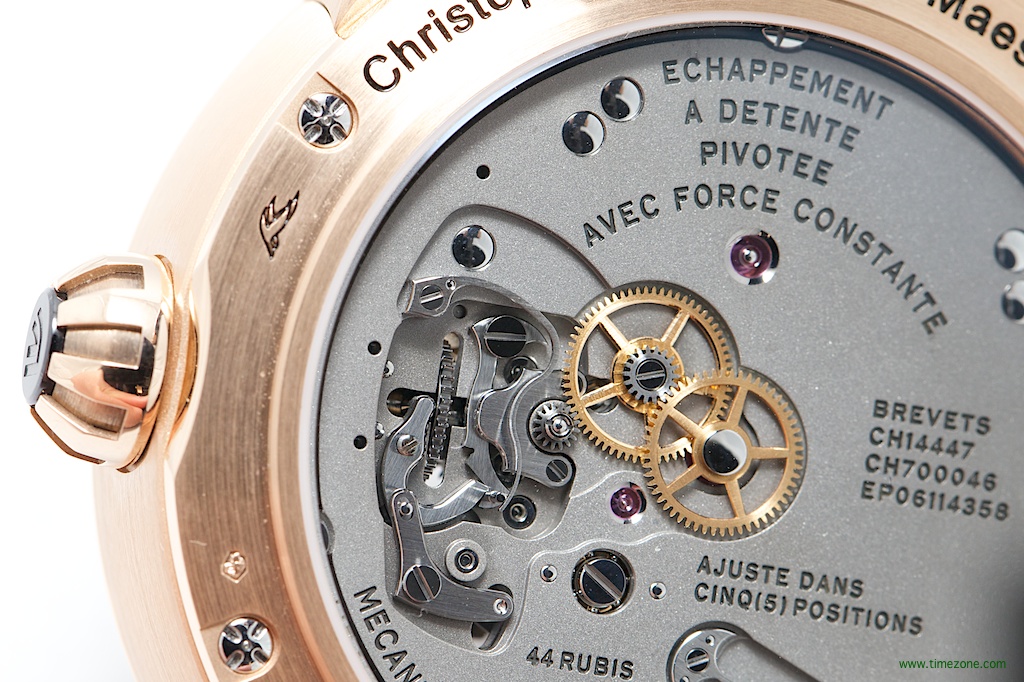 Finally, we were treated to the Poker casino game watch. Christophe Claret’s entirely original complication turns a wristwatch into a fully-functional card game. This interactive timepiece faithfully recreates a card table with 32,768 random combinations for up to three players at a time. On the dial side is a game of Texas Hold’em, and on the reverse is a roulette wheel. 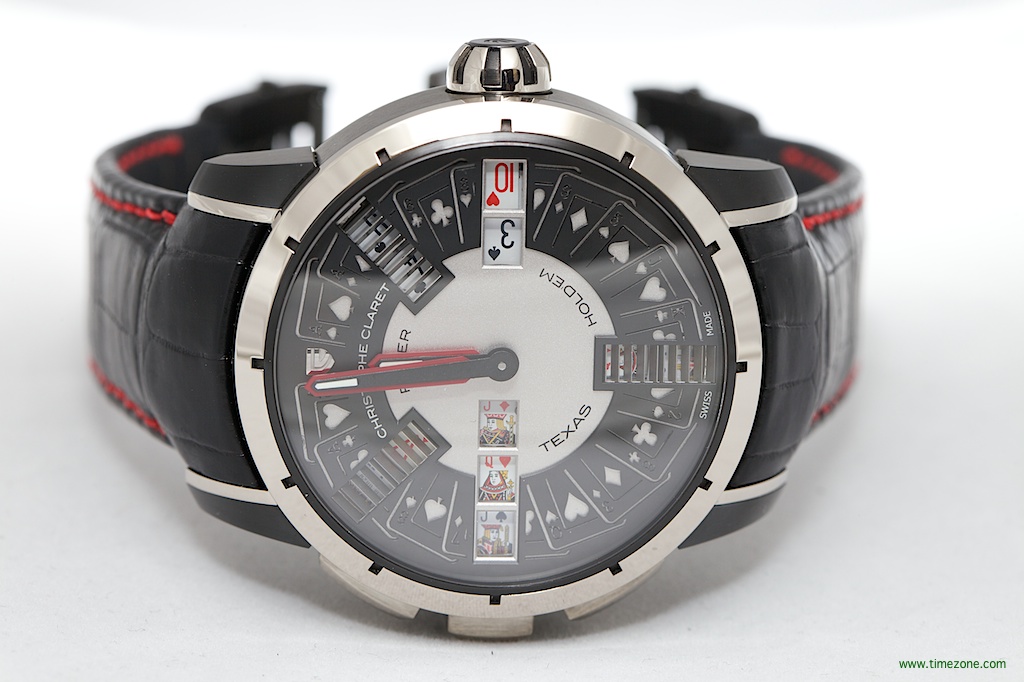 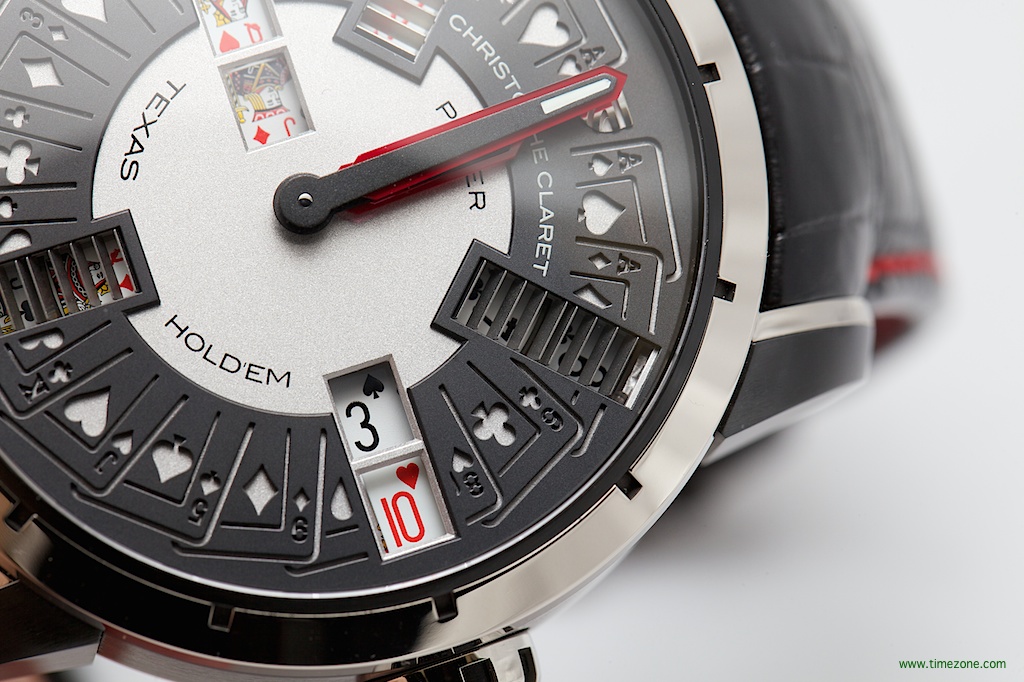 Poker transforms a wristwatch into a fully-functional card game 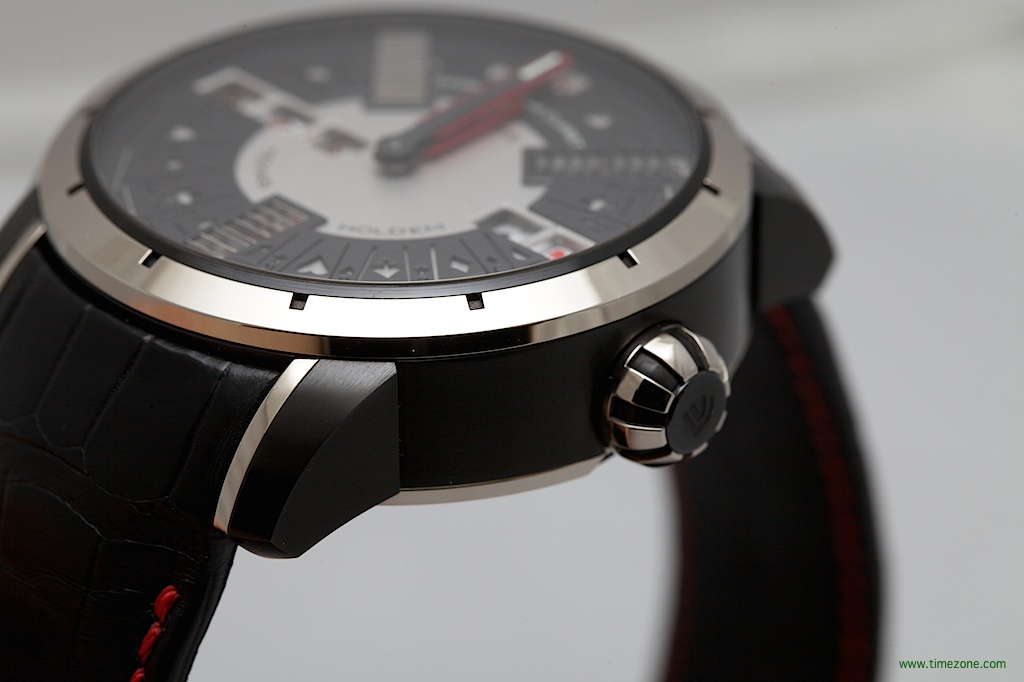 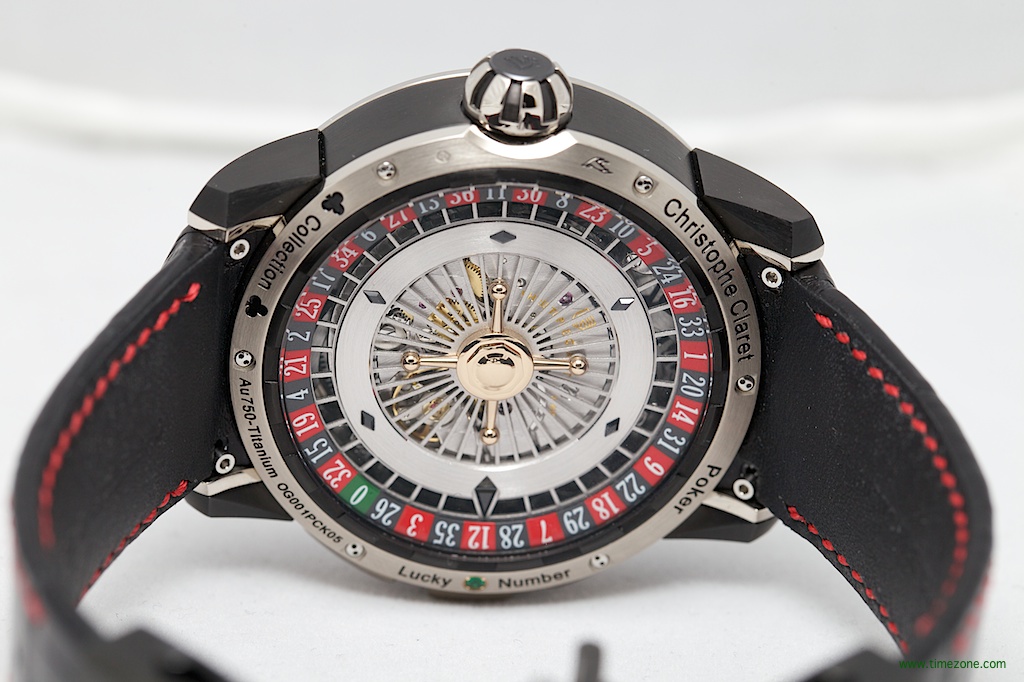 A roulette wheel on the reverse