Talking Shop with the Horological Society of New York

This article originally appeared in Our Minutes.

Last night, watchmakers, auctioneers, and timepiece collectors from across the New York City area descended upon a nondescript corner of the Upper West Side. Once a month, a modest room in the Riverside Memorial Chapel on the corner of 76th and Amsterdam is reborn as the lively meeting place of the Horological Society of New York (HSNY), the oldest such organization in the United States. 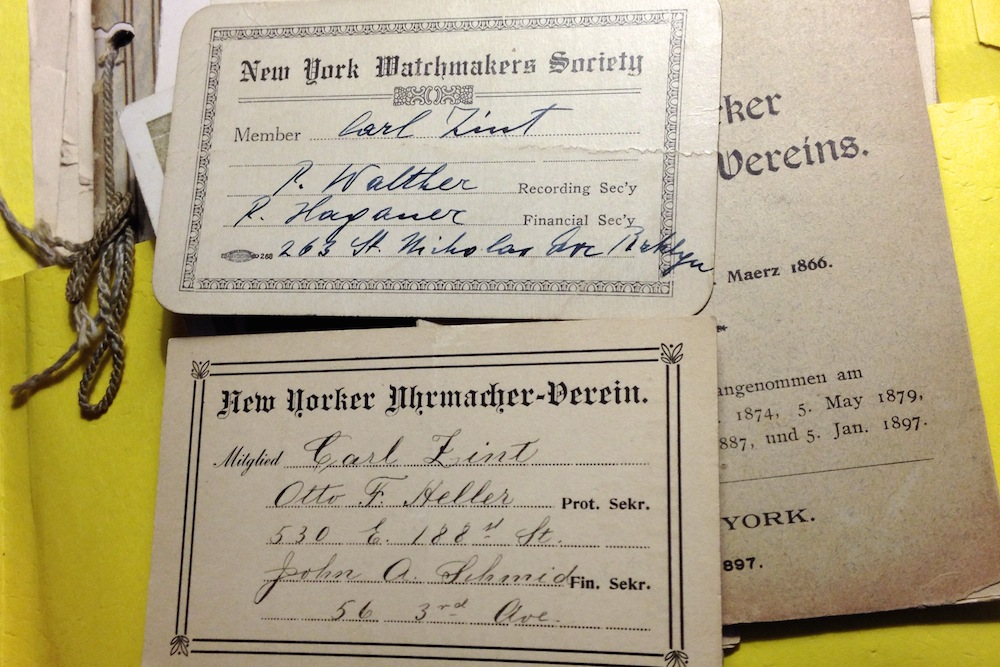 The highlight of Monday’s gathering was a lecture on gear train engineering from Nicholas Manousos—one of HSNY’s trustees, as well as its unofficial PR rep, website manager, and social media guru. Though the type of technology covered in his lecture is hundreds of years old, Nick’s primary work as an independent watchmaker is undeniably modern: he devises watch movements using a computer and a 3-D printer. (He’s recently received some notoriety for his intriguing Tourbillon 1000%.)

“It doesn’t matter whether the components are made of plastic, brass, or steel,” Nick says. “It’s all the same fundamentals. At an HSNY meeting last spring, I was talking with one of our oldest, most accomplished members about an issue I was having with my big tourbillon. He told me to change an angle here or there, and problem solved! Watchmaking really doesn’t change.” 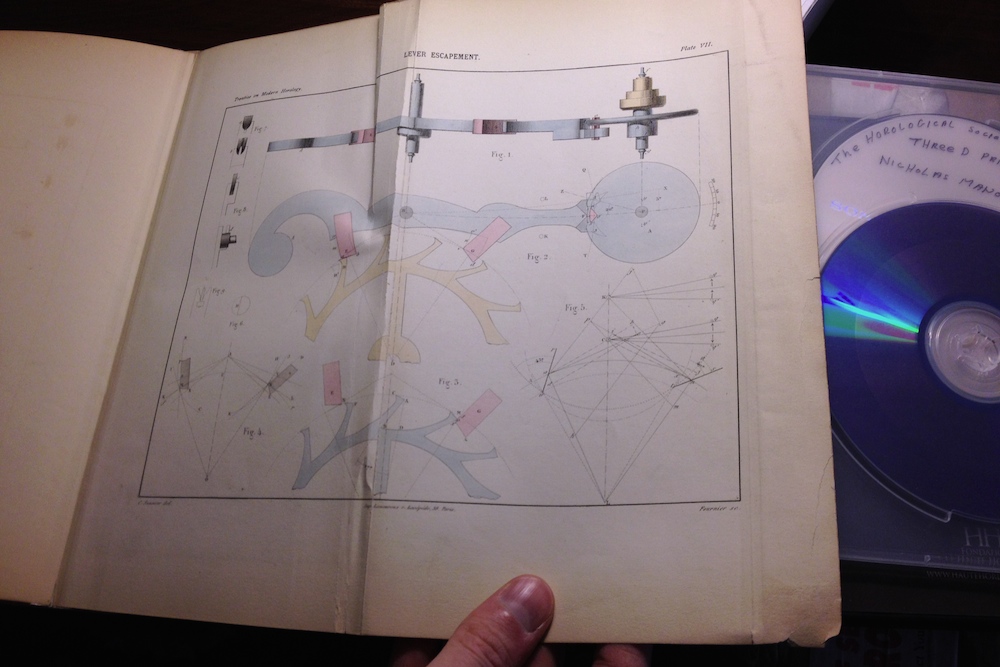 It may be Nick’s background in tech that blurs the lines for him between new-fangled and old-fashioned, young and old. Born and raised in the Silicon Valley, he spent 15 years at various start-ups and tech companies before enrolling in classes at Miami’s Swatch Group school.

“I love math and thinking about engineering problems, but I’ve always liked and collected watches. It’s really a form of mechanical engineering,” he says. “I admit it can be kind of a lonely profession, especially if you work in your own shop. There aren’t a lot of people to socialize with or bounce ideas off of. So when I made the move to New York, I found it really attractive that there was this society of watchmakers. In a city this big, no matter how rare your profession or hobby, there are like-minded people. And I can’t believe I get to come and talk with people about horology and history every month.” 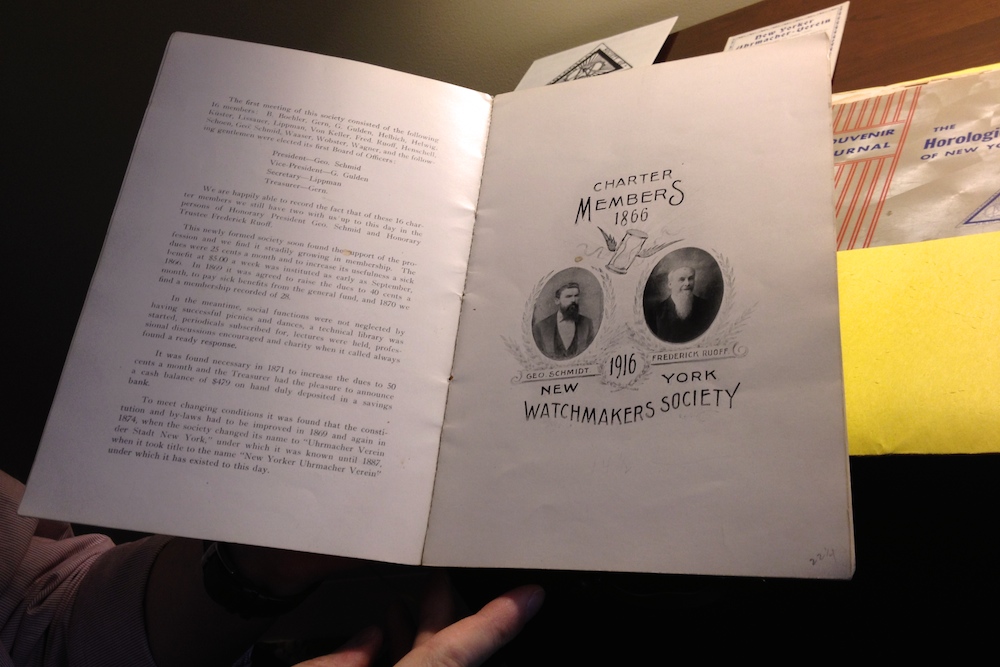 Edwin M. Hydeman, president of HSNY, shares this attitude. With fondness, Ed recalls the atmosphere of his favorite monthly meetings: “We have had many loud, good-natured arguments about the type of oil to be used in a certain kind of clock or mainspring. They’re lively meetings, but also helpful.”

Like Nick, Ed came to watchmaking late in life. After years working as a truck driver, the head of his own marketing company, and an educator, Ed visited a career counselor. Soon, he found himself in his early forties, tasked with picking up 50 screws from a brass plate without scratching it as part of a dexterity test for the prestigious (though now closed) Bulova watchmaking school, located just outside of NYC.

Ed passed, of course, and these days, he’s an estimator for Rolex, having worked for other such illustrious brands as Vacheron Constantin, IWC, and Jaeger-LeCoultre. Still, he recalls those early days, and just how hungry he was for the opportunity to talk shop with HSNY members. 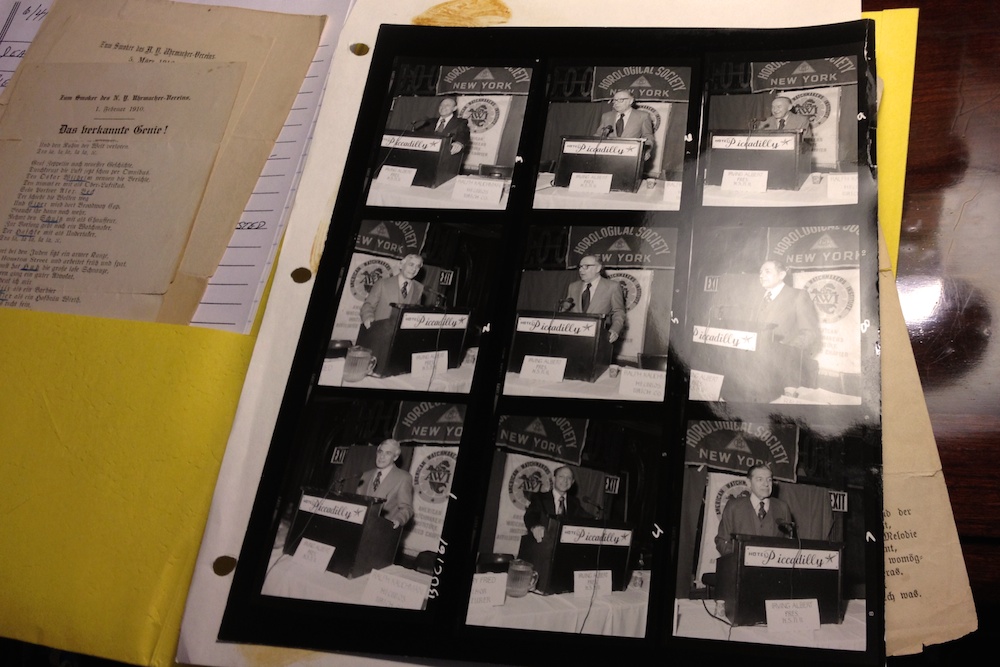 “When you’re repairing watches, your world literally becomes very small,” Ed says. “I enjoyed my trade, but missed interacting with people.” When he joined HSNY in 1995, the president at the time—an accomplished watchmaker named Howard Fass—took Ed under his wing. Post quartz crisis, many of those in the profession were already starting to age out.

“At one of my first meetings, Howard stood at the front of the room and said, ‘It’s so nice to see so many young people here!’ I realized that at age 45, I was one of the young people.”

Nearly twenty years later, not a lot has changed—other than the fact that the generational divide has grown exponentially. Most of the members who attend these days have been involved with HSNY since its heyday in the 1950s and 1960s. Both Nick and Ed are devoted to the society, though, as well as its impact on their profession. They’re eager to promote the fact of watchmaking’s very existence.

Nick has dreams of leveraging his background in tech to find a way to connect venture capitalists with independent watchmakers, to give those with talent an incentive to pursue the profession more seriously. And one day, both Nick and Ed would like to see HSNY offer classes in watchmaking, or perhaps scholarships to aspiring students.

“When I first went to school, I realized that I’d never in my life met a watchmaker,” Ed says. “And these days, I don’t think people know there are schools and jobs right here in the United States.” 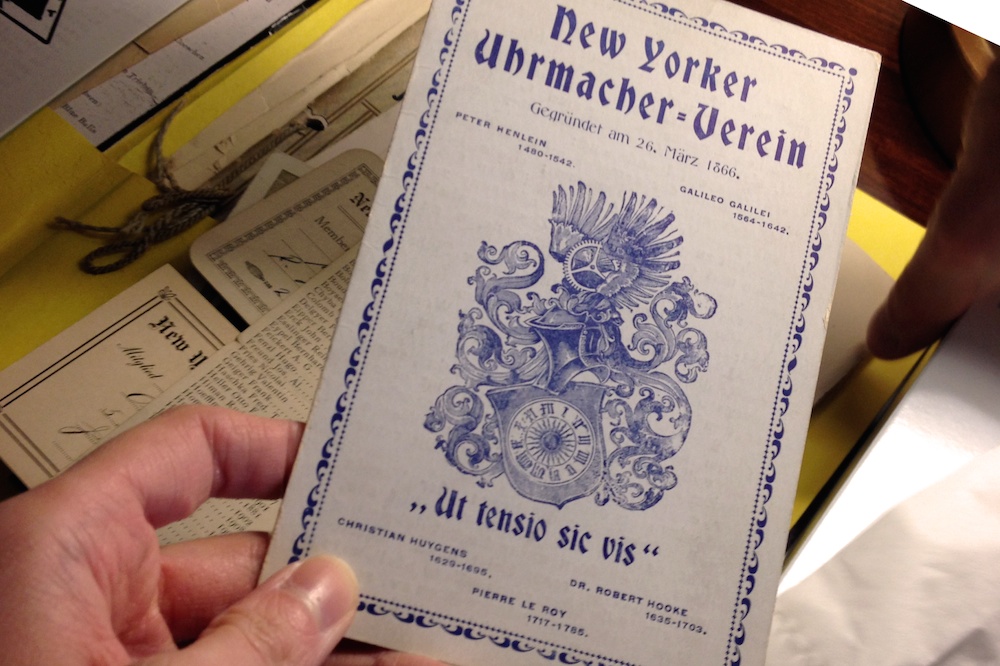 It was very different, of course, upon the organization’s founding. In 1866, a group of German immigrants, accustomed to the guilds and apprenticeships typically available to craftsmen in Europe, banded together to form what was then called the New Yorker Uhrmacher-Verein (New York Watchmaker Club). The club functioned as a prototypical union, one of the most expansive and prestigious in the country, offering a form of health insurance, professional development opportunities, and support to its members. Meetings were held in German; texts were printed in German, including songbooks. The gatherings were so rousing, members—hundreds in attendance at any given meeting—would sing songs about watchmaking. 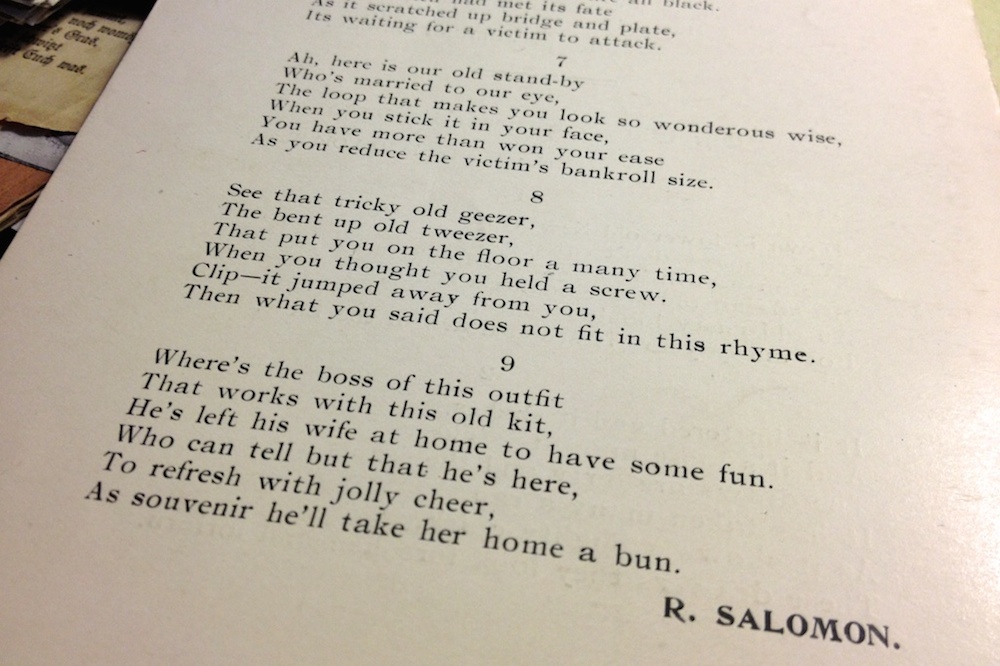 Such songbooks and related ephemera remain crucial to the organization to this day. Some of the nation’s most famous watchmakers served as officers, from Henry B. Fried (author of 14 definitive texts on the craft, among countless international honors) to William Samelius, dean of the Elgin Watchmakers College, and Paul Chamberlain, author of the standard book on escapement, It’s About Time. Over the years, such notables have bequeathed HSNY with rare, original notebooks and signed first editions, in edition to pamphlets and charming invitations to historical banquets. By the 1960s—long after the organization had changed its name and switched its primary language to English—HSNY had grown in such esteem that it put out textbooks for use in courses within the New York City public school system. 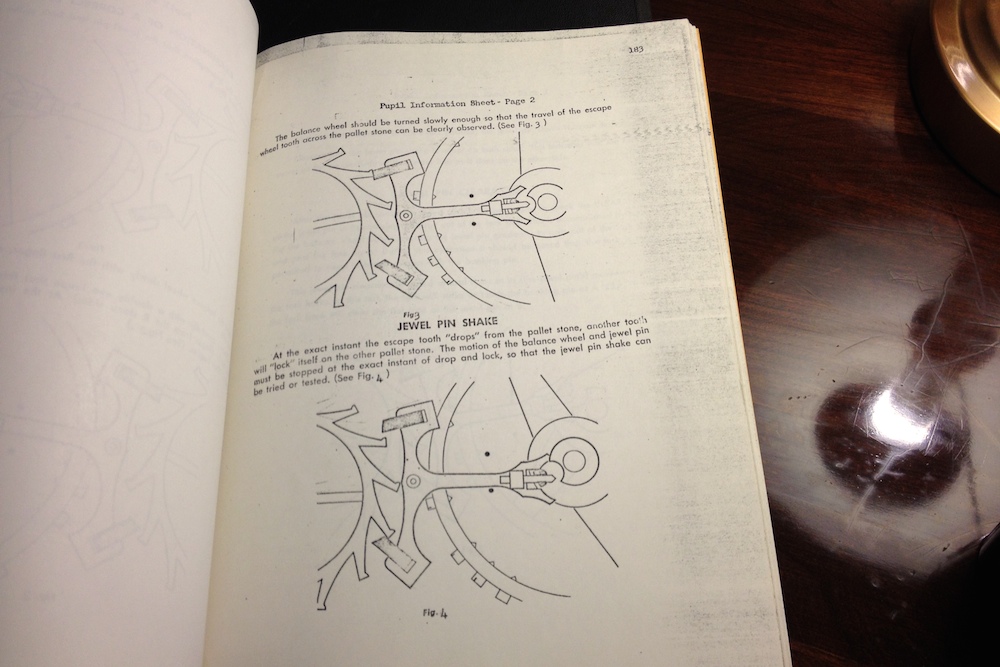 In the 1960s, the HSNY worked with the NYC Public Schools on an elective watchmaking course taught in high schools

HSNY’s library is vast in scope and historical significance. For now, it’s kept in the Riverside Memorial Chapel, currently stashed in a closet on the second floor. In a recent tour of the artifacts, it rapidly became clear that HSNY is watching over a number of rare, beautiful, and fascinating effects of interest to scholars and horological fans the world over. However, these items haven’t yet been stored in a climate-controlled environment, and many are on the verge of crumbling to dust.

Once housed at the Bulova Watchmaking School (then moved out in a flurry of quick-think action upon the school’s closing), the bulk of the collection will soon be absorbed into that of the New York Historical Society—just around the corner at 77th and Central Park West. There, the texts will be restored and preserved, and visited for free by anyone attending during visiting hours. And many of the texts in more stable condition will remain in the same building that HSNY calls home, available to members for check-out. 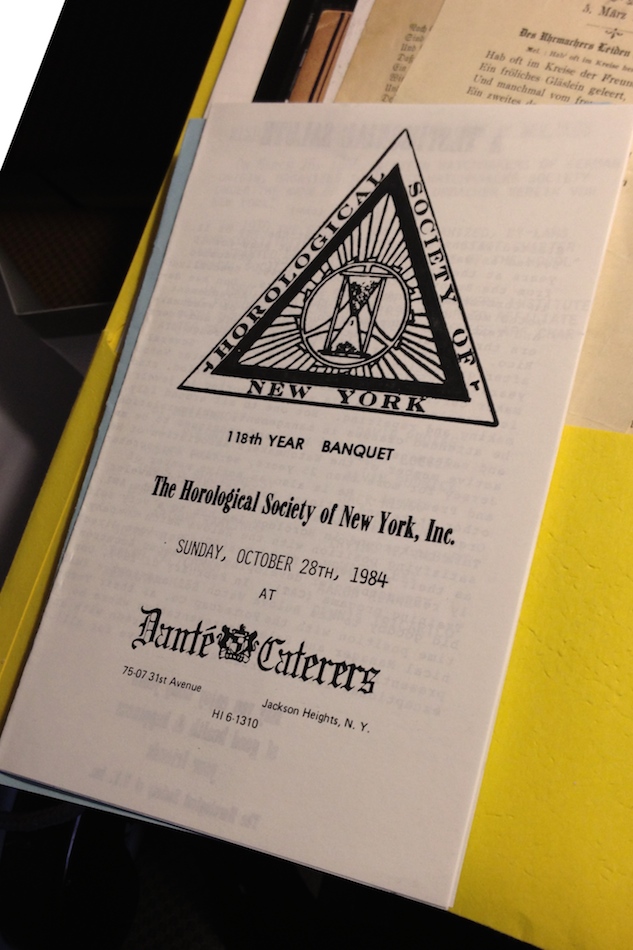 HSNY’s logo has remained largely unchanged for many years

As it approaches its 150th year, HSNY aims to protect and uphold its past while preparing for a sustainable future—not just for the organization, but for watchmaking itself. With the launch of its first website and Facebook page (both recently built by Nick in the span of a day), the society is working to remain open to an ever-evolving horological landscape, while preserving the old-world craftsmanship and community values that make it special.

“I remember a speech given by the president of Rolex’s watchmaking school in Lititz, Pennsylvania. He was talking about the three different kinds of watchmakers. The first put in their hours, then go home and forget about watchmaking. The second enjoy being the best of the best and keep their secrets to themselves. And the third were the kind who could help sustain our profession: They gave back to the community, contributed to watchmaking as a trade, and encouraged others to consider the field.”

HSNY has survived for 148 years because it attracts the latter, fostering a bright and vivid community of talented individuals devoted to what is at once an archaic and forward-thinking art form. If you’re in the New York area with an interest in horology, HSNY would like to invite you to attend a meeting and think about joining. There’s no need to be a watchmaker, so if you love discussing the science, history, and cleverness fueling this innovative field, you’ll be welcomed with open arms.

Katie Wudel is the Managing Editor of Our Minutes. Katie is a timepiece enthusiast and freelance writer contributing to such distinguished literary journals as McSweeney’s, Tin House, Prairie Schooner, and more.