The Royal Collection: A.-L. Breguet Clocks and Watches by JESSICA

In the 1780s, Abraham-Louis Breguet became known in England, where George Prince of Wales was one of his earliest clients and admirers. A.-L. Breguet visited London several times in 1789, 1790 and 1791 to obtain new orders and collect payment for purchases made by the prince.

Over the years, the Prince Regent (future King George IV) remained one of A.-L. Breguet’s most loyal customers. In 1814, the Prince Regent purchased two highly emblematic timepieces: the Constant Force Tourbillon Clock No. 1252, and the Sympathique Clock No. 666, together with Pocket Watch No. 721, which had an extremely sophisticated synchronising mechanism. The Prince Regent then purchased a complicated musical chronometer with a clockwork that acts as a metronome, known as the Metronome Clock. Finally, in 1825, George IV acquired a high-precision Double-Pendulum Resonance Clock known as the remarkable “watch with two movements”.

On 9 March 1798, the first patent registered by A.-L. Breguet was for the constant-force escapement. The basic principle of this invention consists in exchanging the driving force controlling the movement of a watch, whose action may be irregular, for a rigorously constant force. This mechanism uses the variable force of the parts to rewind a spring or weight which transmits a constant impulse to the regulating organ. A remarkable concept, yet very delicate to apply, constant-force escapement was only used by Breguet for rare, prestigious commissions. 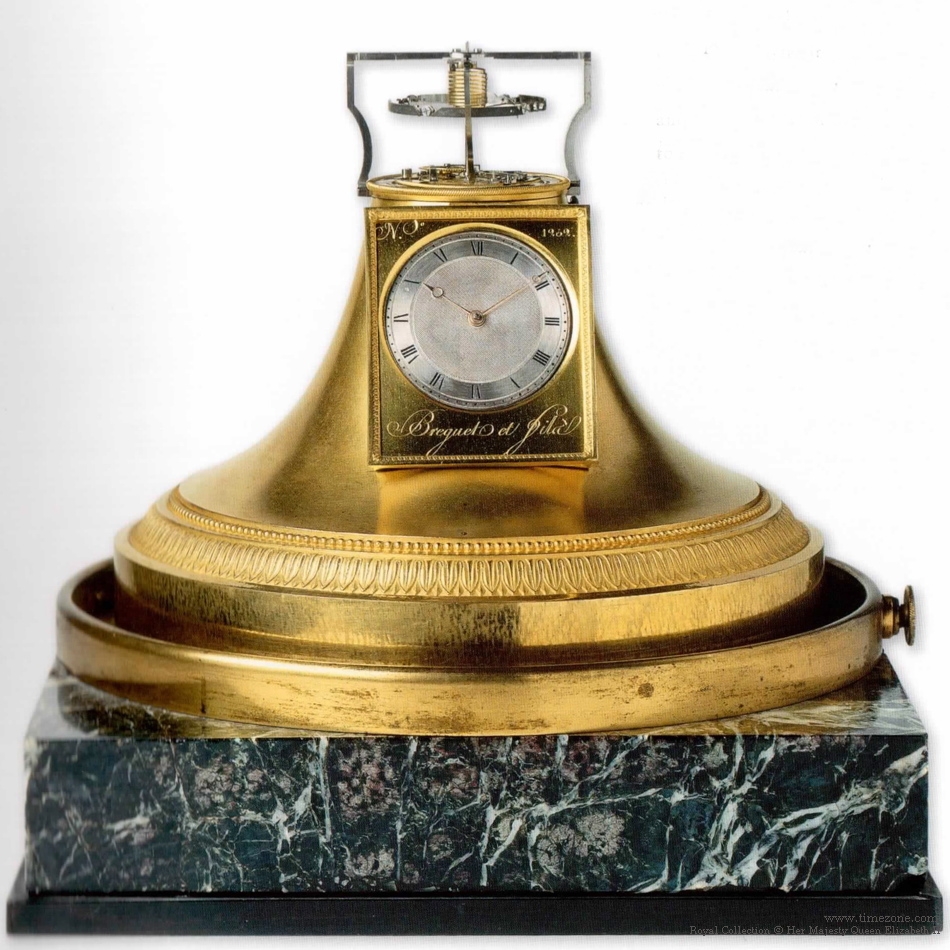 The Constant Force Tourbillon Clock is a precision clock with a constant force escapement and a tourbillon regulator. Since the tourbillon regulator’s purpose is to compensate for the positional errors that occur in portable watches as they move, this stationary clock demonstrates how A.-L. Breguet revelled in over-complexity.

In 1813, the Breguet archives document that the clock was completed and the clock was sold to the then Prince Regent in August 1814 for the sum of 6,900 francs. Sadly, in 1964, the clock left the Royal Collection and was last seen passing through one of the major London auction rooms before it was destroyed by fire. 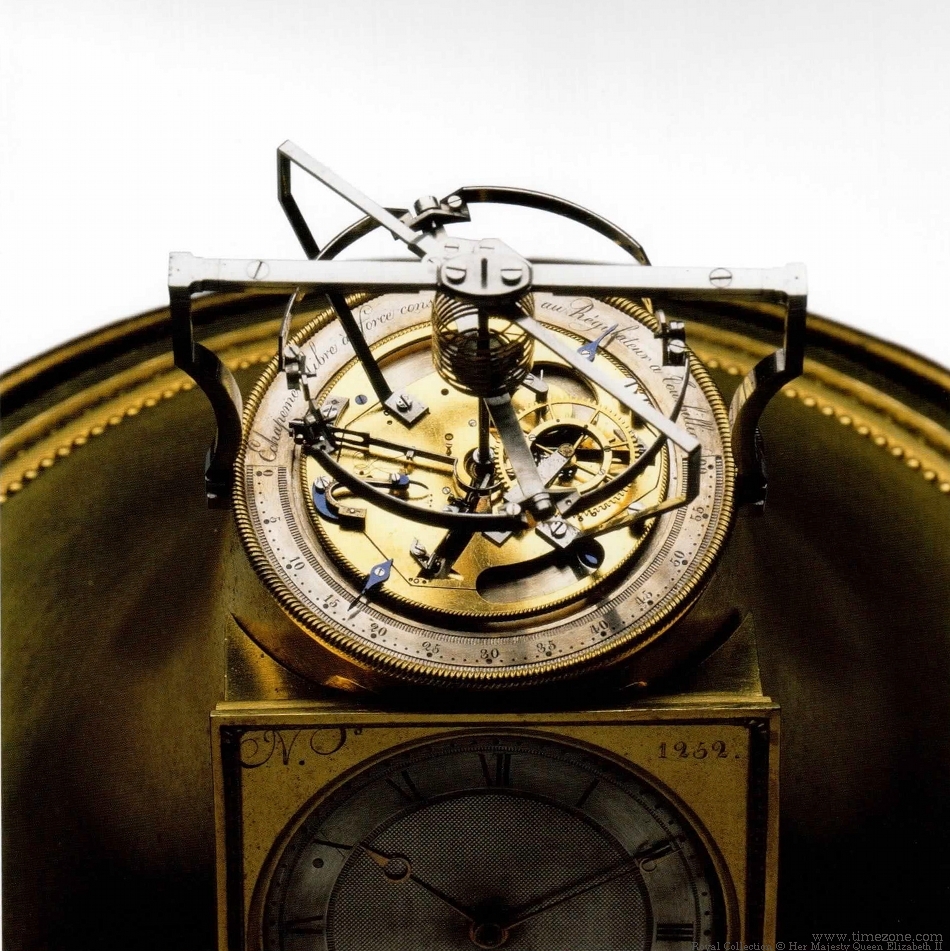 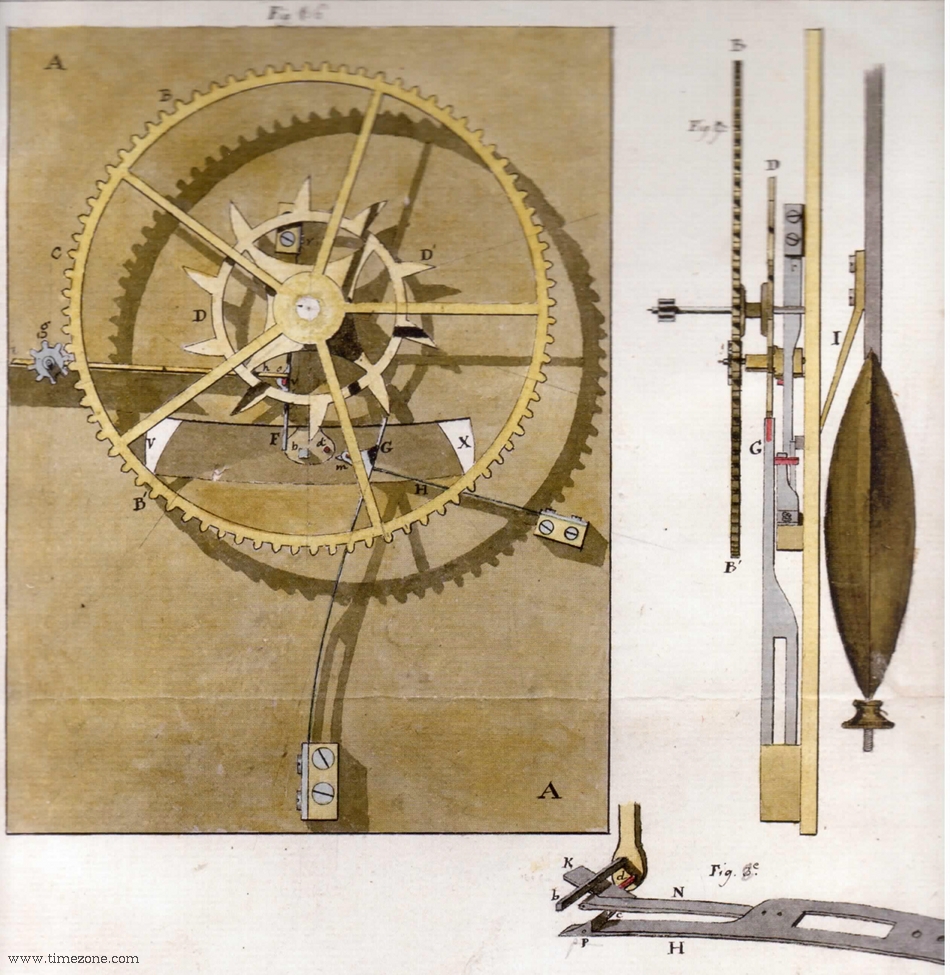 Illustration for the constant-force escapement patent, filed in 1798

In 1795, A-L Breguet invented the sympathique (synchronising) clock and its dependent watch. Although not the most useful invention, the Sympathique were Breguet’s most dramatic production. The Sympathique was designed with a cradle at the top of the master carriage clock that would automatically wind and adjust a detachable pocket watch that could be worn during the day. As Breguet explained to his son in 1795, “Then, every night on going to bed, you put the watch into the clock. In the morning, or one hour later, it will be exactly to time with the clock. There will be nothing visible externally to show where it has been touched. I expect from this the greatest promotion of our fame and fortune.” 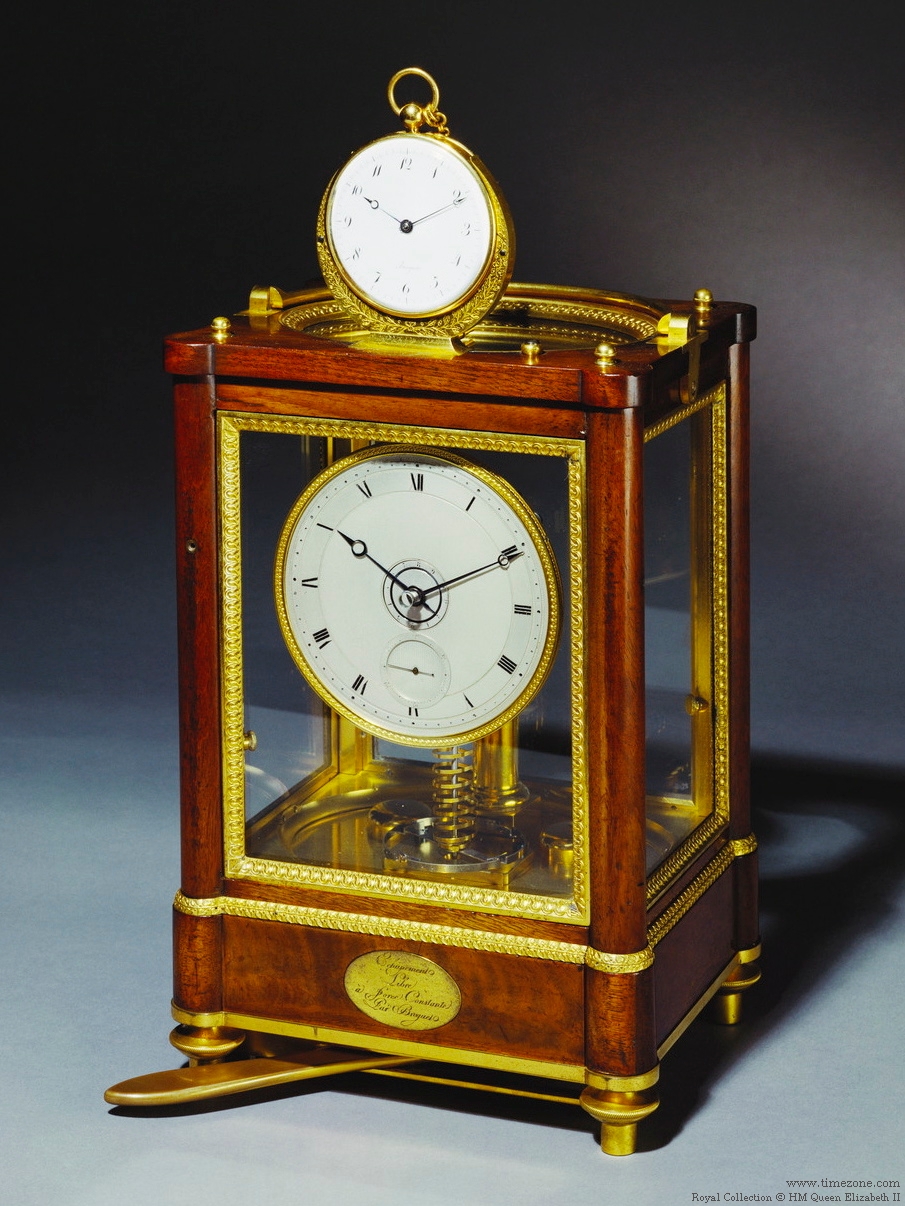 Breguet claimed that it took only one day each to modify a suitable clock and pocket watch, and this may have been so for the first models which just set the minute hand of the watch on the hour. However, Breguet later made clocks that wound the watch as well as set the hand within limits; then clocks that set both hands regardless of where they were; and also clocks that regulated the watch as well, according to how much it was gaining or losing. 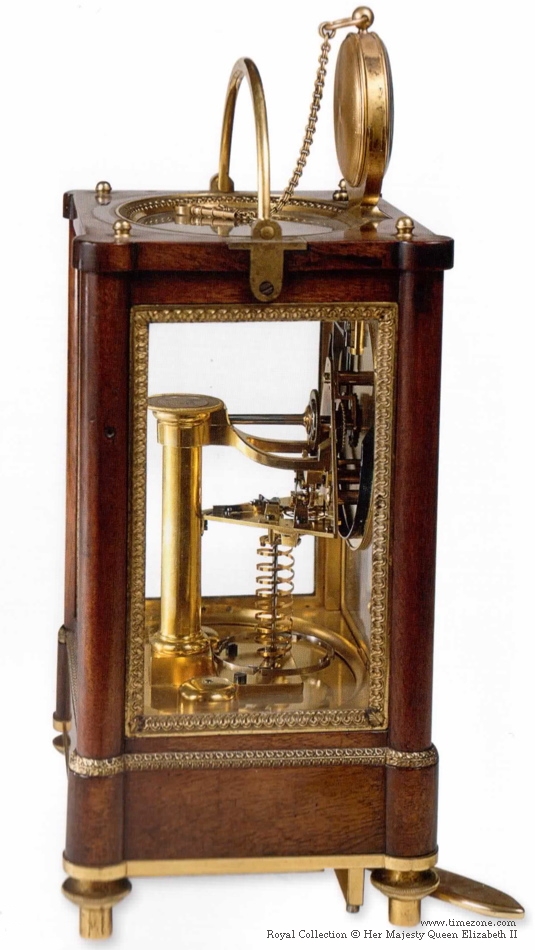 In 1814, the Prince Regent (the future George IV), commissioned a pendule sympathique for the sum of 11,500 francs. The protective mahogany case features four glass sides with chased bronze mounts and a handle. On top, there is a cradle with support bracket for the pocket watch (montre sympathique). The movement has a large bi-metallic temperature compensated balance wheel with two gold helical springs, and features an escapement with constant force that was patented by Breguet in 1789. Two barrels result in a 40-hour power reserve. Each time at 12 o’dock, the hands of the pocket watch are synchronised with the time of the master carriage clock. The height of the master carriage clock is 23 cm, and the total dimensions of the Sympathique with watch are 33.3 cm x 17.5 cm x 17.5 cm. An oval shaped brass plate is inscibed, “3eme Echapement Libre a Force Constante par Breguet’. 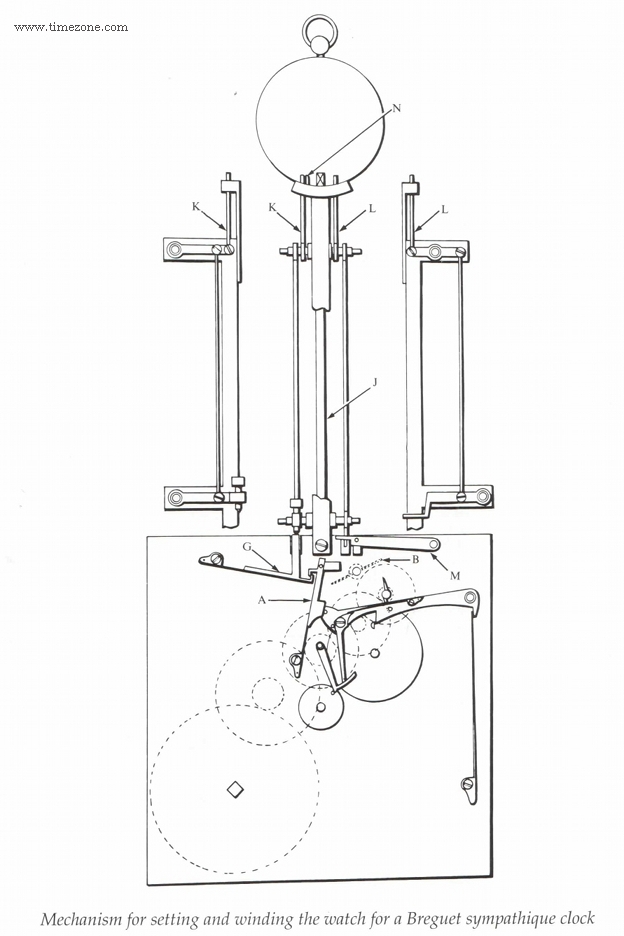 The Metronome Clock is the final Breguet clock in the Royal Collection. The chronometer clock’s simple case consists of an ormolu frame housing five glass panels, the top secured by four small acorn finials. Two dials are positioned one above the other. The lower is white porcelain with Arabic numerals and 7 inches in diameter and a subsidiary dial at 12 o’clock. Above is a silvered brass dial that is 4-3/4 inches in diameter, with an outer zone divided 0-60, an inner zone divided 0-4, with two concentrically-pivoted register hands. 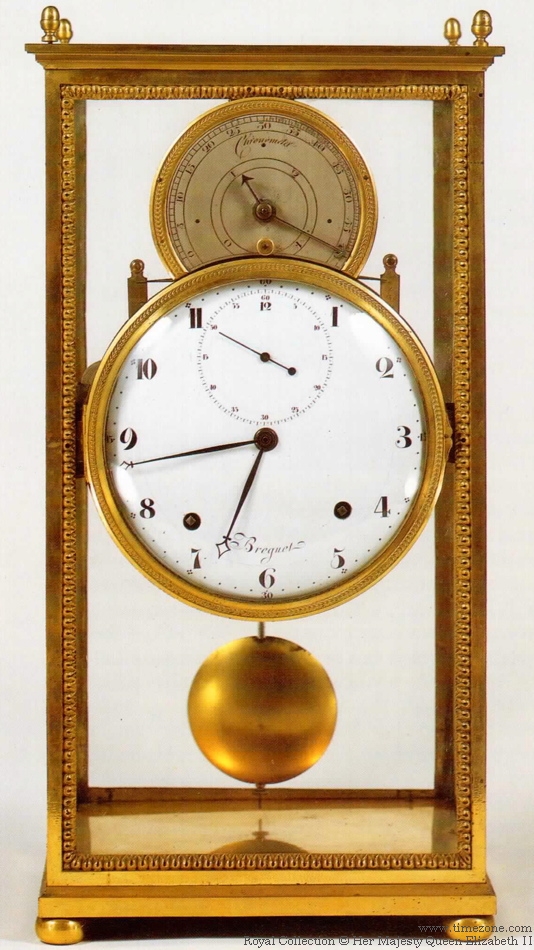 At its heart beats an eight-day going barrel movement with a pinwheel escapement. The primary pendulum is 11-inches in length and suspended on a knife’s edge. A second pendulum consisting of a 1-1/4 inch brass ball suspended by a chain. Pulling a small knob between the dials disengages the primary pendulum, then engages the small brass ball that beats to the cadence determined by the register hands. This incredibly complex clock not only functions as a metronome to measure musical beats, but also contains an elaborate compensation mechanism so that precision time-measuring resumes even though the primary pendulum is stationary. 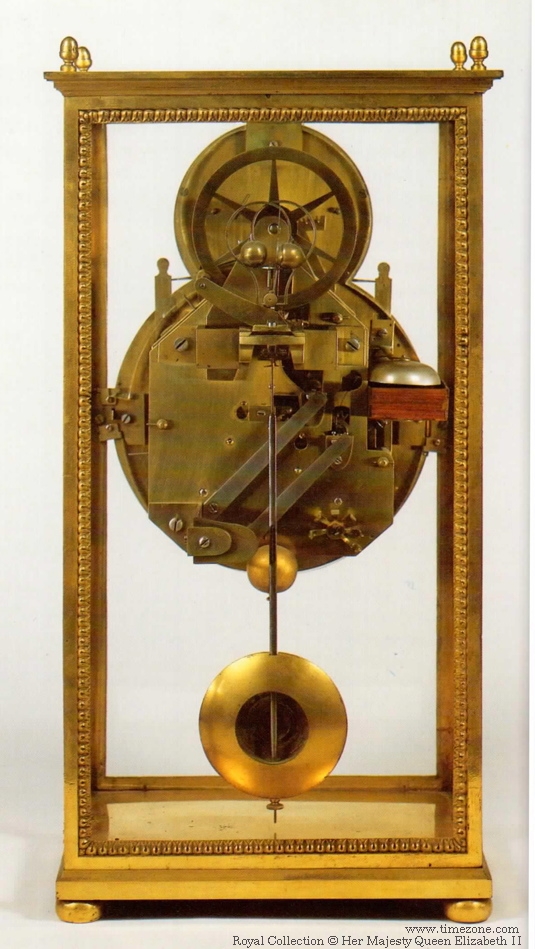 Back of the Metronome Clock, showing the complexities of the interchangeable pendulums

Resonance clocks have two or more pendulums locked to each other in rate, which aids rate stability and can compensate for disturbances. For this to happen, two identical pendulums that swing in the same plane must be very closely regulated to the same rate and then suspended from the same non-rigid mounting frame. Once they are set running, the two pendulums will influence each other and will start to oscillate in sympathy of the the other, trading energy until they swing in anti-phase. Once locked into anti-phase, each pendulum will correct errors in the other, should they occur. To fine-regulate the clock when running, small weights can be added to or removed from weight trays on either pendulum.

On 19 September 1825, A.-L. Breguet delivered this remarkable resonance clock to George IV for £1,000. Also delivered with the clock was a pen-and-wash drawing of the clock. In essence, the clock consists of twin movements, each complete with its own dial and pinwheel escapement, driven by a single 8-pound weight, the ends of whose line are fixed one to each barrel. The pendulums are suspended one behind the other, and each pendulum swings in the opposite direction to the other ensuring by sympathetic action that both movements remain extremely accurate. The left dial has the hour display in the window, with minutes and seconds on separate dials. The right dial has a conventional time display, plus a minute hand for apparent solar time and the date on the equation-of-time cam arbor The second hand on the right dial runs anti-clockwise.

The circular disk in the middle is the driving weight 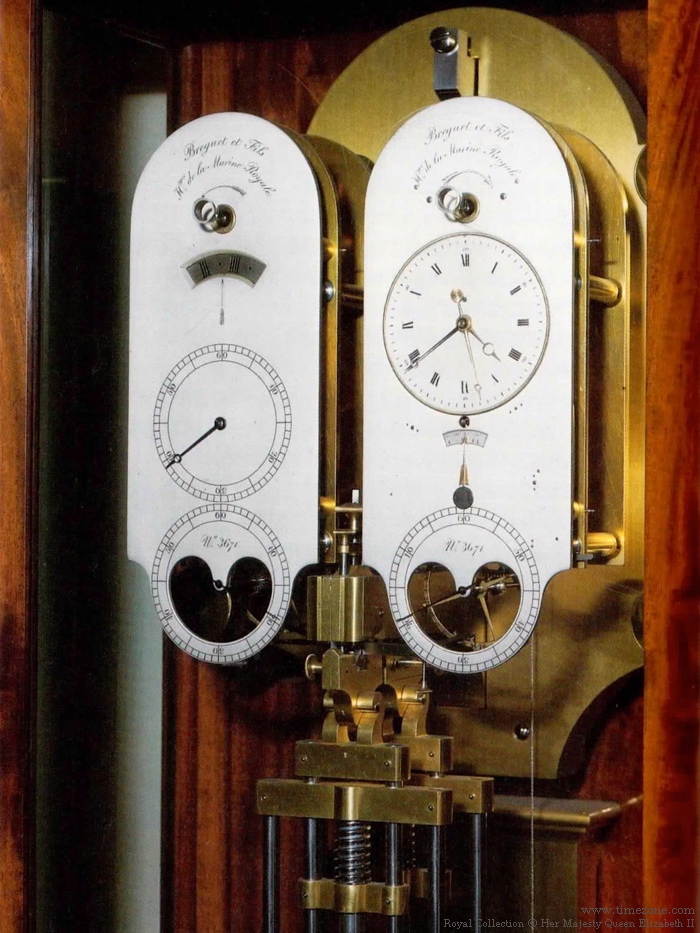 The dials indicate apparent and mean time, the time only (left) and the month and the day (right)