In-depth with the Cartier ID Two by PAUL BOUTROS

In early July, I too was lucky enough to be invited to Cartier’s manufacturing facility in La Chaux de Fonds, Switzerland. Following James Dowling’s comprehensive report, below is another look at the ground breaking ID Two, with some photos and personal impressions. 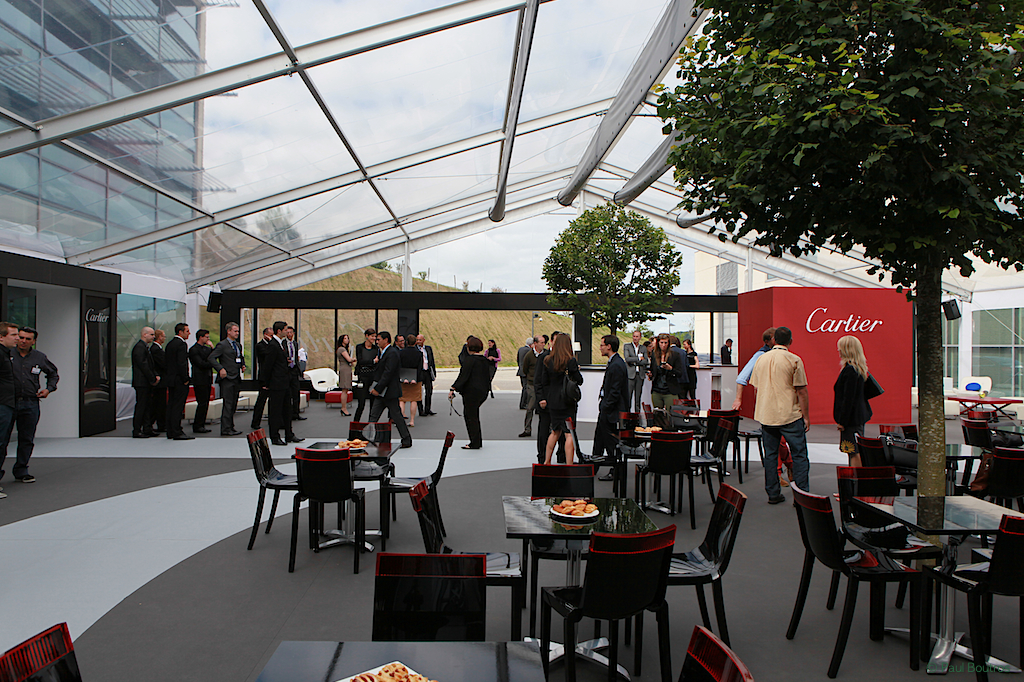 The ID Two event lounge space set up at the entrance of the La Chaux de Fonds factory
I’ll start by saying, in my opinion, what Cartier was able to achieve with the ID Two Concept Watch is nothing short of revolutionary for mechanical watchmaking. Following a full day of educational sessions and presentations highlighting ID Two’s key innovations, I came away amazed by Cartier’s innovativeness, and the possibilities their innovations hold for the future of mechanical watches. 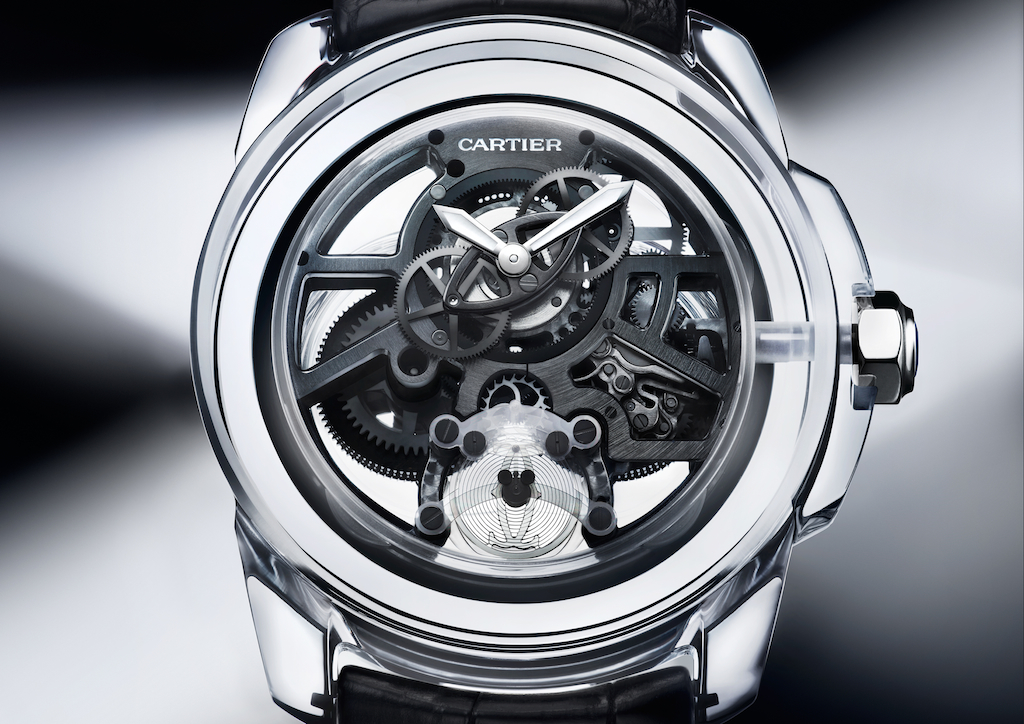 Photo Credit: Joël von Allmen
Beginning with the ID One introduced in 2009, the design, advanced materials, and manufacturing techniques allowed the ID One’s movement to be assembled with no adjustments and operate with absolutely no lubrication, indefinitely.

With their second Concept Watch, the ID Two, Cartier sought to significantly improve the efficiency of a watch movement. 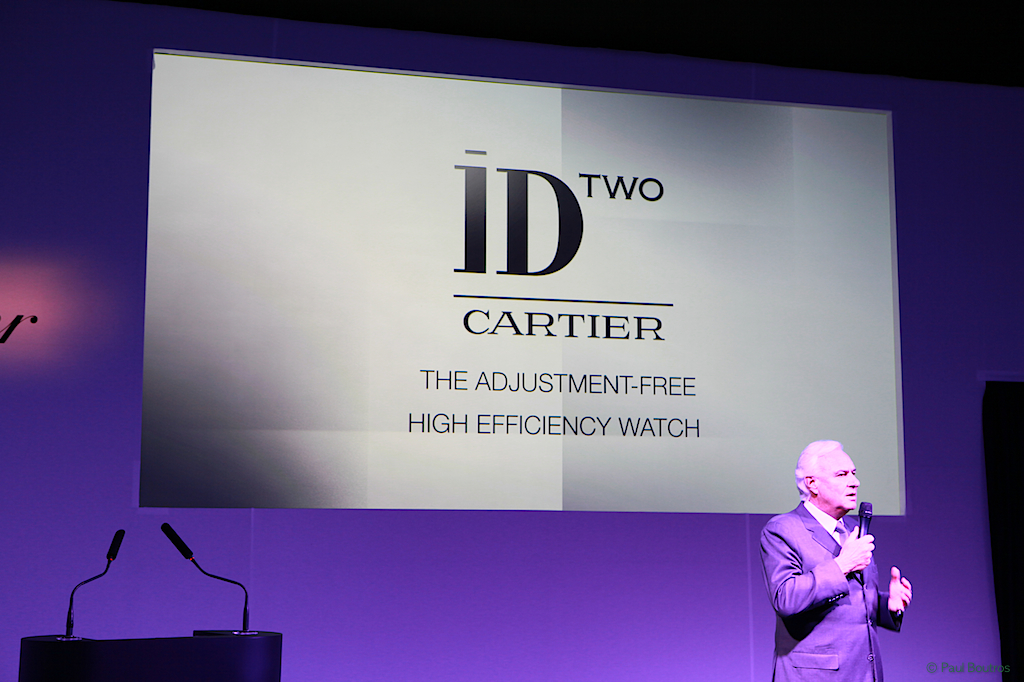 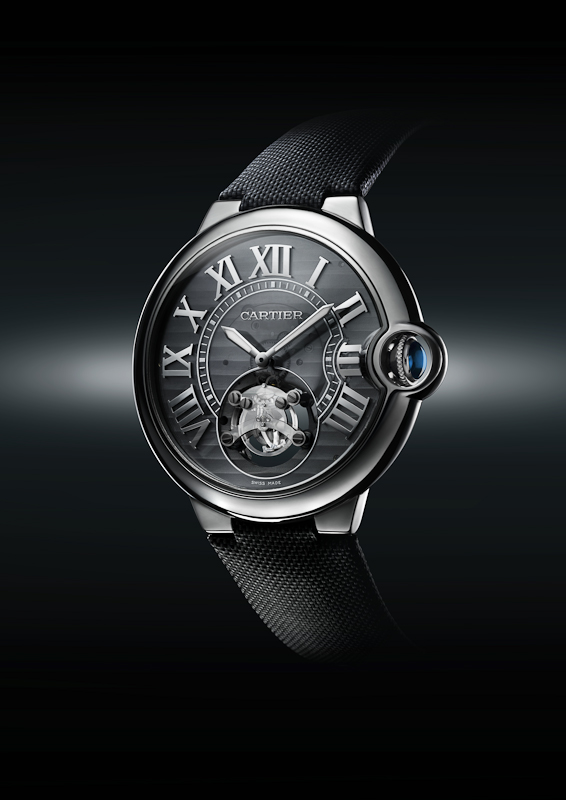 The Cartier ID One Concept Watch
Recognizing that mechanical watches are highly inefficient – 75% of a mainspring’s energy is wasted through losses in a typical watch – Cartier’s objectives for ID Two were:
1. Increase stored energy by approximately one-third.
2. Reduce energy consumption by 50% at the same volume

Following five years of research and development, Cartier’s objectives were achieved. What resulted is a movement with a truly extraordinary 32 days of power reserve provided in a reasonably-sized watch measuring 42 mm in diameter.

Let’s take a look at some of the key innovations housed within, starting with the one I found most impressive…

Vacuum Case
During a dinner conversation with Hélène Poulit-Duquesne, Cartier’s International Marketing Director, she explained how she was part of the Cartier “Think Tank” team, involved with the early discussions planning the ID Two’s development.

A quick word about Cartier’s “Think Tank” – it’s a four-story 300 square meter building which integrates and co-locates the brand’s engineering teams, as well as other, diverse professions and disciplines typically kept apart. Cartier believes bringing all these parties together is the best enabler for idea creation, and facilitates the rapid transfer of these ideas to results.

Early on, the ID Two team identified the negative impacts of air turbulence on the escapement’s balance wheel, the critical subsystem in a watch that controls timekeeping accuracy. Friction caused by air molecule turbulence, at the tiny scales/gap between the balance and its bridge, comprises a whopping 80% of all the friction affecting the escapement. In comparison, the contact friction at the pivots of the balance staff (the ends of the staff around which the balance wheel turns back and forth) accounts for just 20% of the total. The air turbulence is comparable to the pressure shock felt when a fast-moving train enters a tunnel. Imagine this disturbance occurring twice within the period of the balance wheel’s oscillation – six to eight times per second for a typical watch. Clearly, the loss of energy is significant.

Hélène (remember, a marketing director – not a watchmaker or engineer!), during these early discussions, suggested the idea of using a vacuum to remove air from the case, similar to vacuum-sealed food packaging. Recognizing this simple idea was indeed a great one, the team went ahead and began experimenting. From a local butcher shop, they got their hands on vacuum sealers used to seal meat.

The idea of creating a vacuum within a case is not new. Attempts were made during the early 20th century, but watchmakers quickly reached a dead end due to the fact that oils/liquids boil and quickly evaporate within a vacuum. 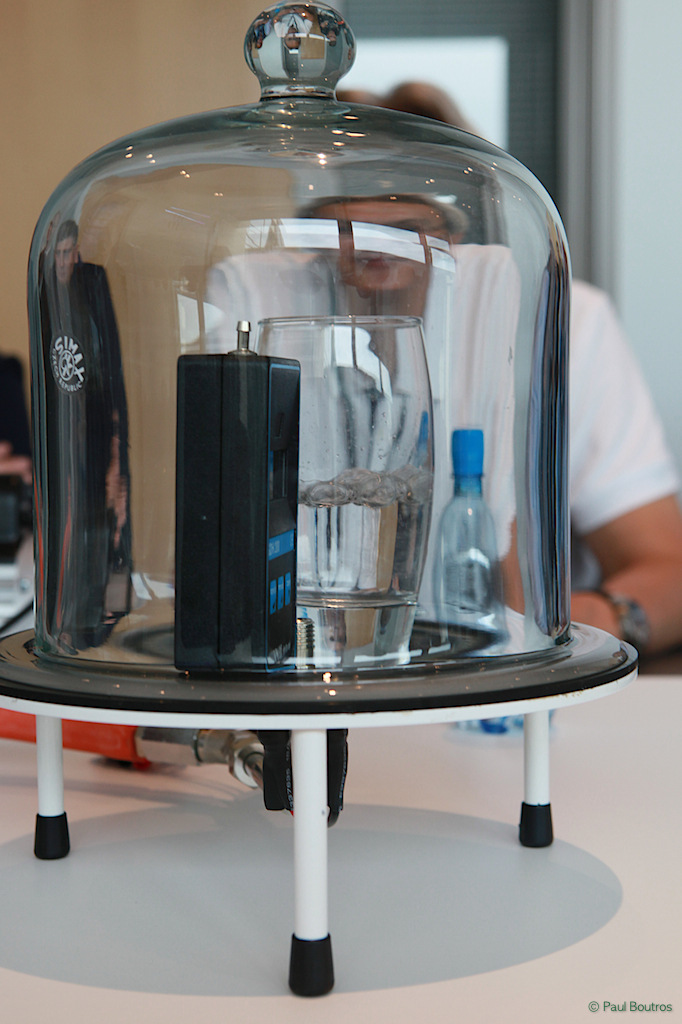 A Cartier demonstration showing water boiling at room temperature when air is vacuumed out of an enclosed space.
Fortunately, the lubrication-free movement and components used in the ID One Concept watch positioned Cartier perfectly to make a vacuum-sealed watch a reality.

Building, testing, and learning a lot, immediate efficiency improvements were seen by the team when a vacuum was created within a watch case. Now, with much less friction, the amplitudes (e.g., how far back and forth the balance wheel reaches with each oscillation) of the balance wheels under test increased significantly. 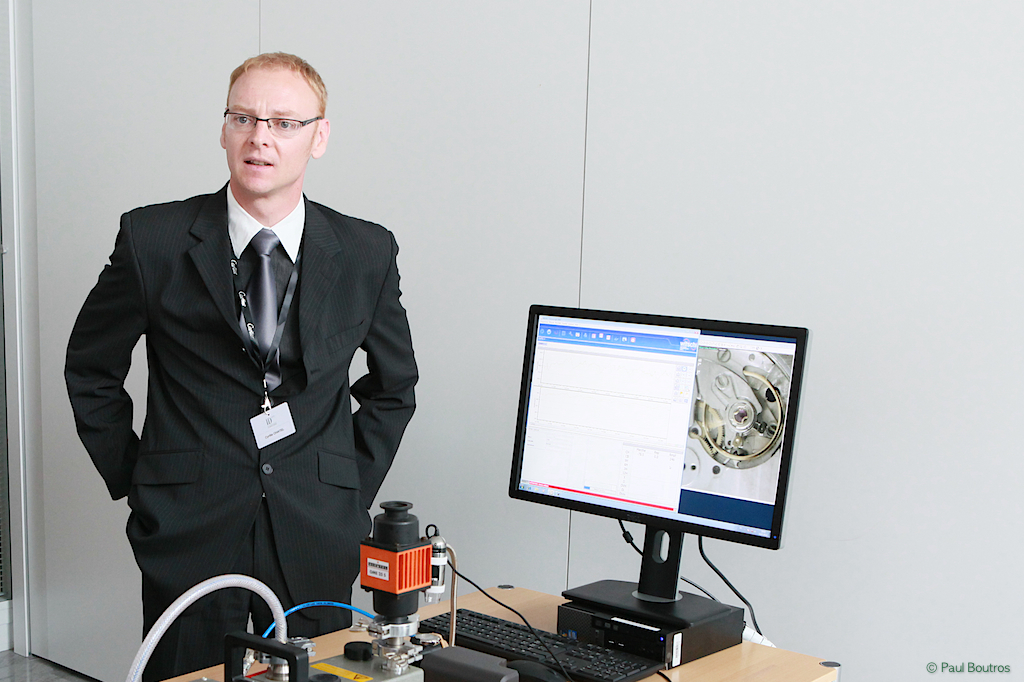 Cartier’s Cyrille Chatel demonstrates the significant increase in amplitude exhibited by a standard balance wheel when subjected to reduced air pressure through a vacuum.
Unfortunately, over time, air molecules make their way through the porous rubber seals of a watch, making it extremely difficult to keep a vacuum seal. For example, a watch case with a 30 meter water resistance rating can retain a vacuum seal for just 3 months.

Maintaining the vacuum state inside a watch case for extended periods, therefore, became the team’s focus. Their approach was to 1. minimize the air entrance/leakage points by minimizing the number of case parts and interfaces, then 2. address the interfaces to make the case as air tight as possible.

Their solution, with three patents pending, was based on the use of a high-tech, fully transparent polycrystalline ceramic material made of Ceramyst. Used in the bomb-resistant windows of the white house and bullet-proof windshields of military tanks, Ceramyst can be formed into any shape. 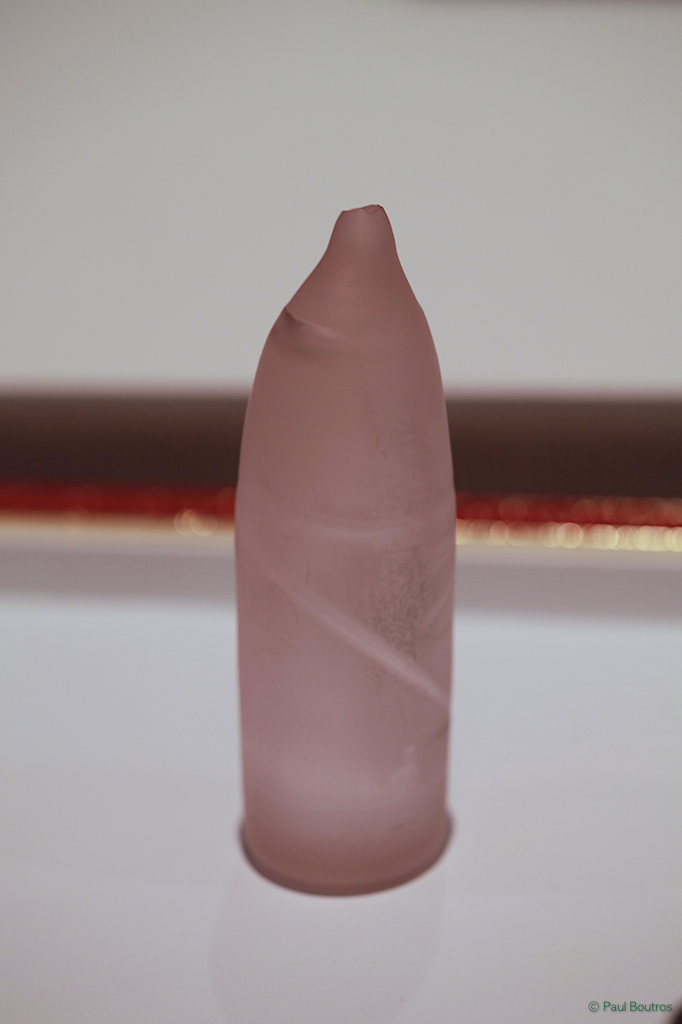 A Ceramyst blank
As such, the entire top portion of the case, including the crystal, bezel, case center, and lugs comprise just one mono-block piece. An additional benefit of Ceramyst is its inherently low roughness, reducing the ability of air molecules to enter through contact joints. The Ceramyst caseback is secured to the case with no screws – just vacuum pressure. Once a vacuum is formed, 80 kg of pressure is required to separate the caseback from the case. Between them, and at the crown, is an innovative, clay nanoparticle doped gasket developed specifically for ID Two. The nanoparticles fill in the porous surfaces found in rubber gaskets, creating a minimally porous, protective barrier against air leaks. The net effect: A near absolute vacuum that can be maintained for 10 years, with 99.8% of air molecules removed – or 500X less air than normal.

With this vacuum protection in place, the ID escapement, described next, can operate with 37% greater efficiency.

ID Escapement
Leveraged directly from ID One, the ID Two’s “ID” escapement uses a balance wheel, pallet fork, and escape wheel made of carbon crystal. Carbon crystal is Cartier’s terminology for synthetic diamond. Some misperceptions on what carbon crystal exactly is have existed since the ID One’s introduction. One incorrect belief was that the term was a linguistic play on the word silicon. Since Cartier deals only in genuine diamonds, the official use of the term “synthetic diamond” in any of their products is strictly forbidden.

Like silicon, synthetic diamond is temperature and magnetic-field resistant and requires no lubrication. Unlike silicon, it’s significantly less brittle while being extremely hard and shock resistant. 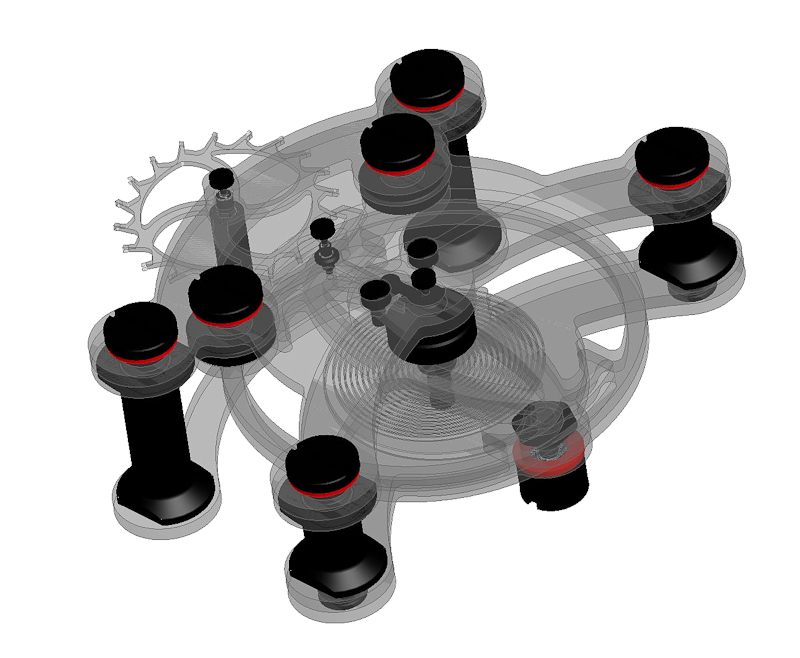 The Carbon Crystal “ID” Escapement, as configured for the ID One Concept Watch
The balance spring, made of a glass-ceramic composite material, Zerodur, and all other components of the ID escapement are manufactured using Deep Reactive Ion Etching (DRIE) technology – a micron-level manufacturing process 10X more precise than traditional watch part manufacturing techniques. The extremely precise parts that result from DRIE fabrication permits assembly of these critical components without any adjustments or regulation whatsoever.

Mainspring barrels with double fiberglass springs
Cartier’s material scientists searched the world for the right mainspring material that could 1. provide an increase in torque compared with a metallic spring, and 2. be durable and fabricated small enough for use in a watch. Their analysis and test results identified micro fiberglass composite, bundled and coated with parylene could provide 30% more energy in the same volume as a traditional metallic alloy. The parylene coating yields the same friction coefficient as lubricated metal as used in a traditional mainspring, thus requiring no lubrication. The individual fiber strands are tiny, measuring just 9 microns each – very difficult to find, but capable of the best results. Two patents are pending for the mainspring barrel, with its “twin duo level” design with four barrels total providing the power source for the 32 days of continuous operation. 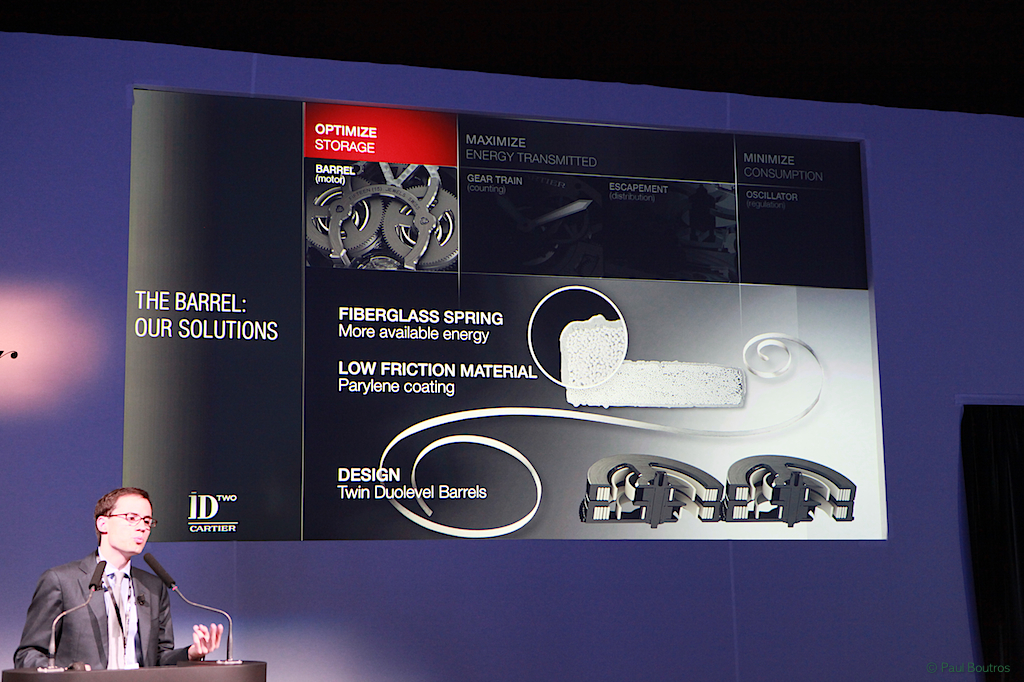 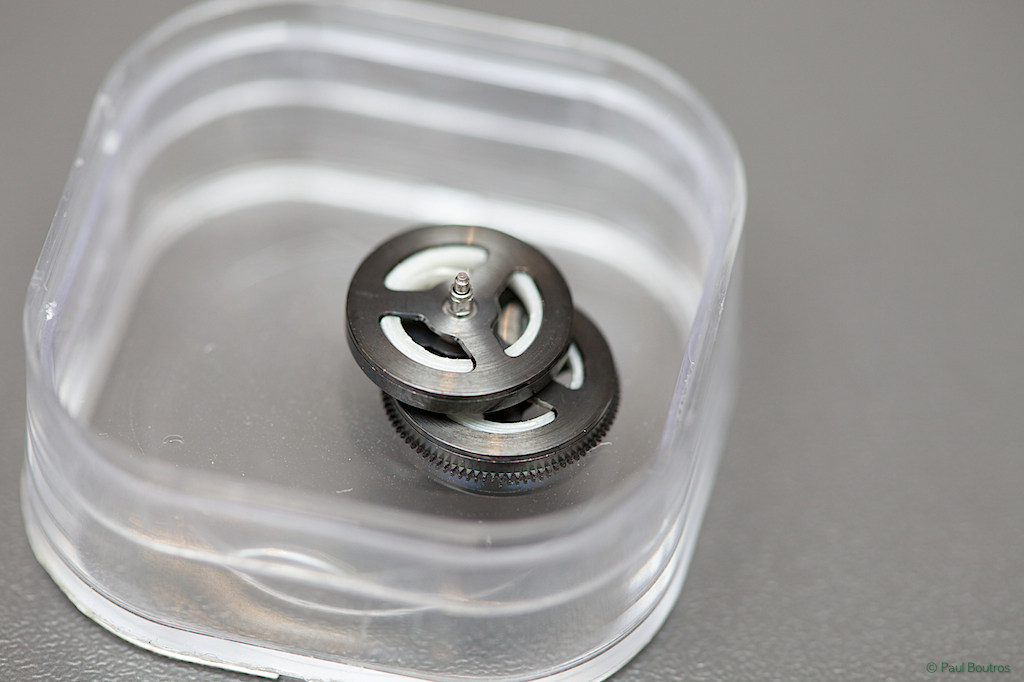 A shot of the fiberglass spring 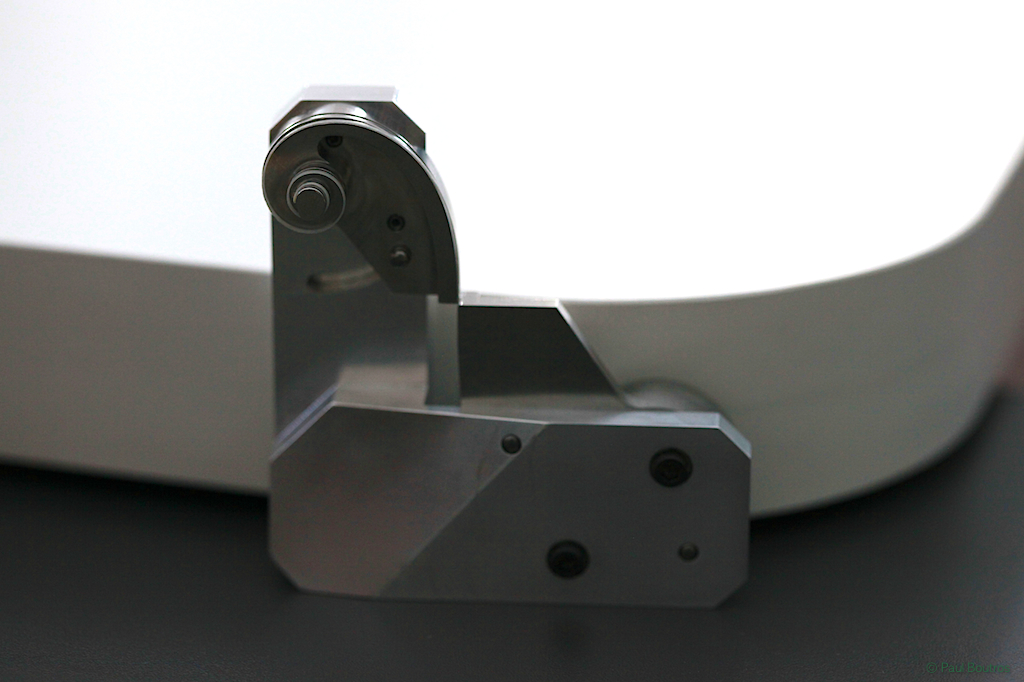 A new, differential gearing system was also employed within the movement’s gear train. Found in automobiles and helicopters, ID Two’s epicycloidal gear train is a much more efficient (500% improvement) means of transmitting the mainspring’s energy through to the balance wheel. The gears themselves are ultra light, made of carbon crystal (synthetic diamond) coated silicon. Combining the two features – the efficient gear ratios and ultra light weight results in a 25% improvement in transmitted energy. 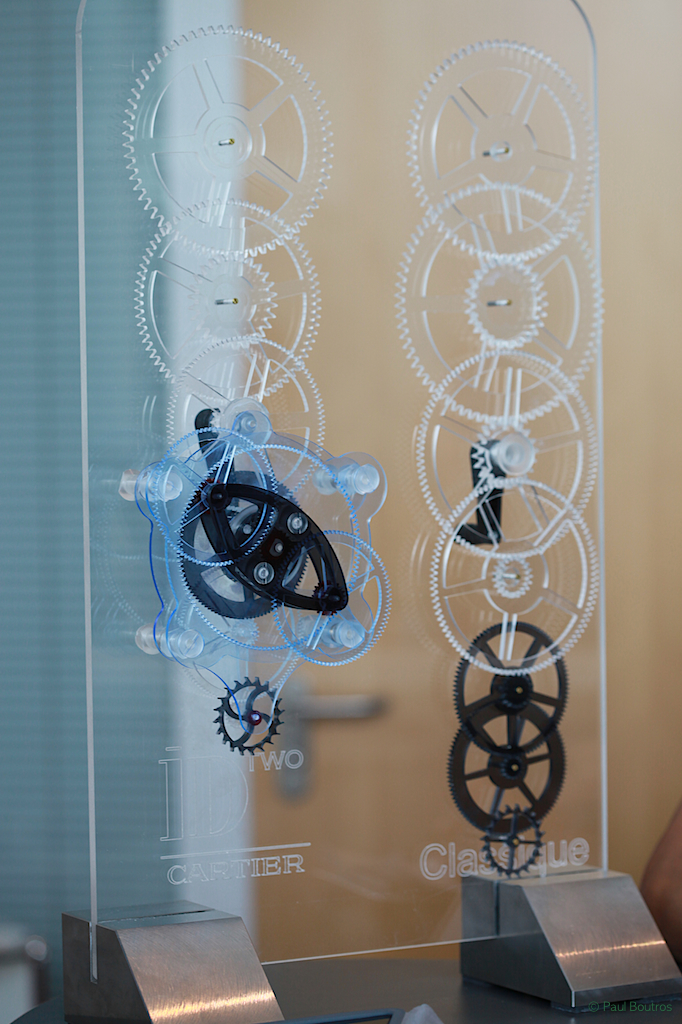 A mechanical demonstration model showing the ID Two’s epicycloidal gear train next to a traditional gear train on the left
Finally, similar to the ID One, gears, bridges, pivots, axles, and pinions throughout the movement are coated in Amorphous Diamond Like Carbon (ADLC). A fine black protective layer made of carbon and hydrogen, ADLC is self-lubricating and does not wear over time. Similar to the ID One, ADLC enables the entire movement to require no lubrication over its lifetime.

Some real-world photos of the ID Two… 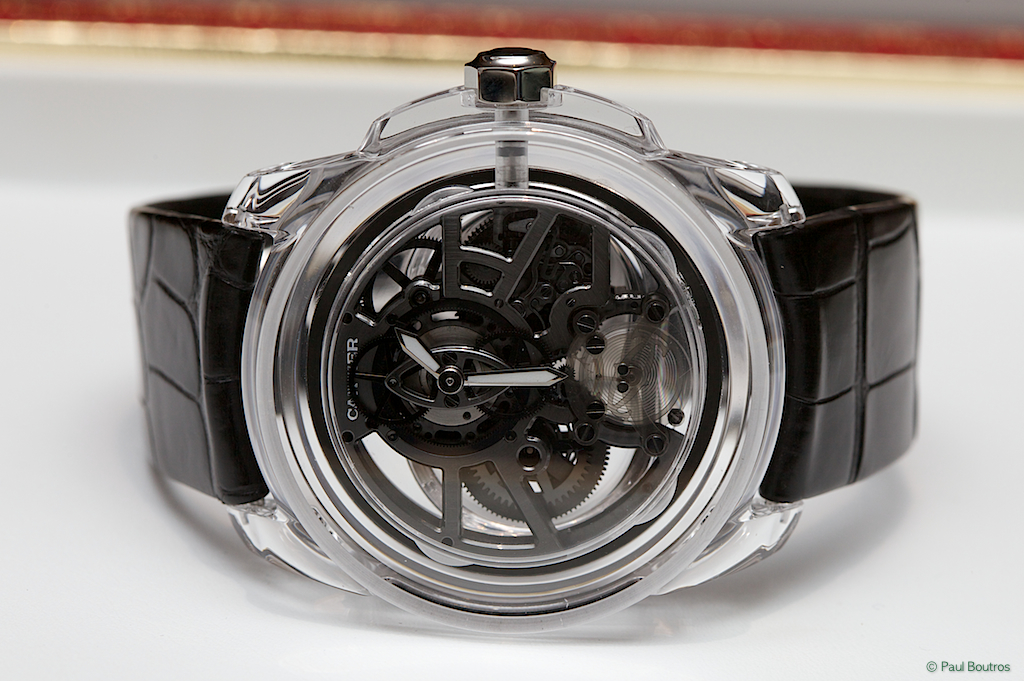 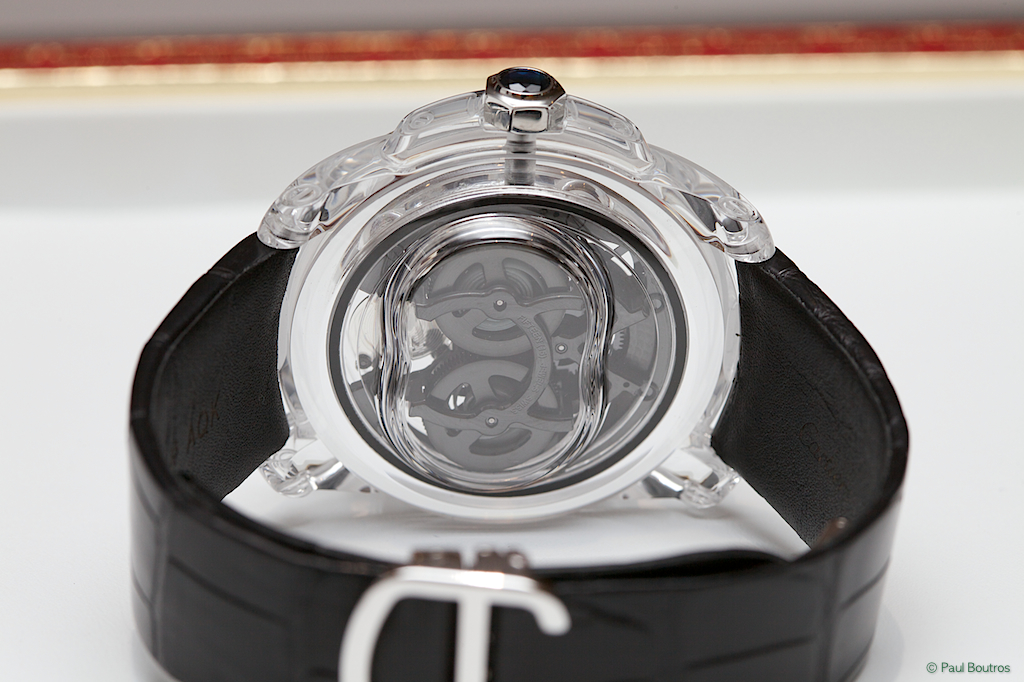 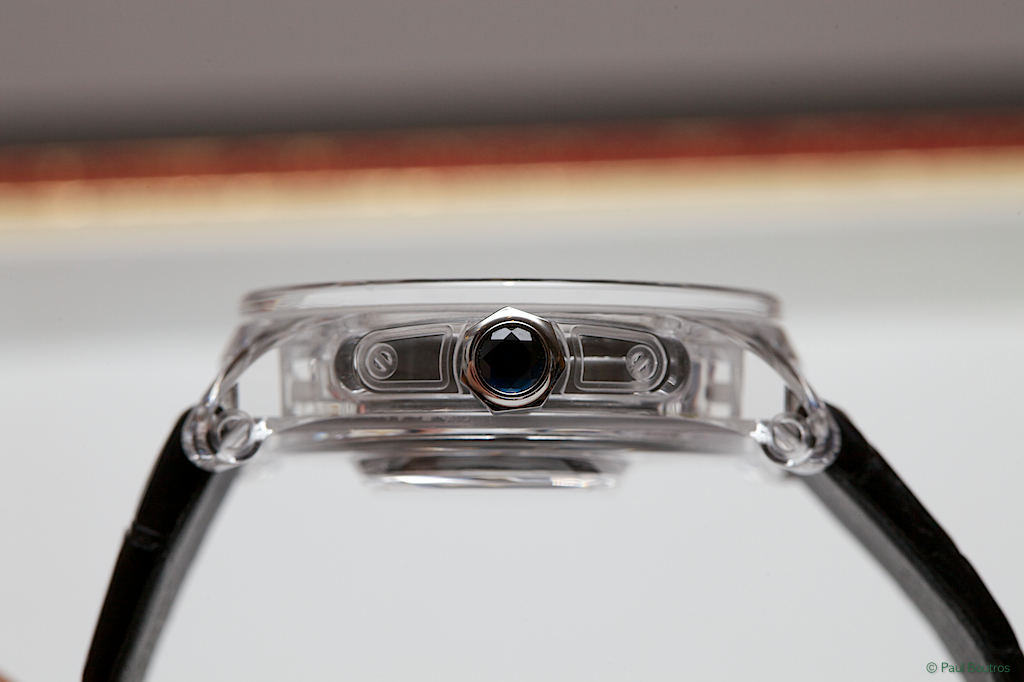 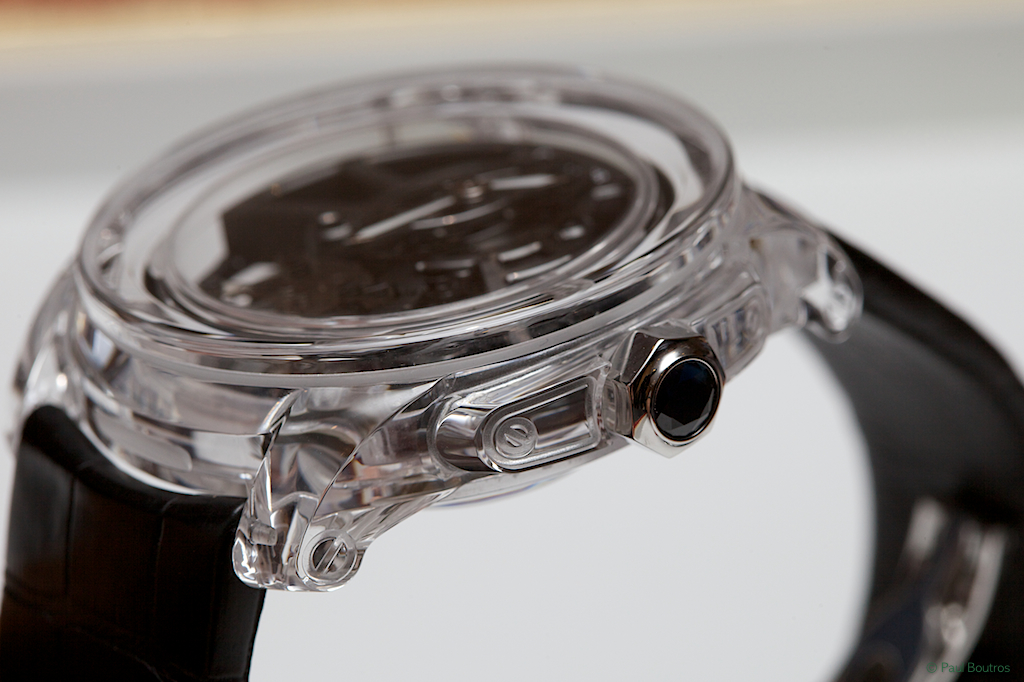 Another view of ghost screws on the case 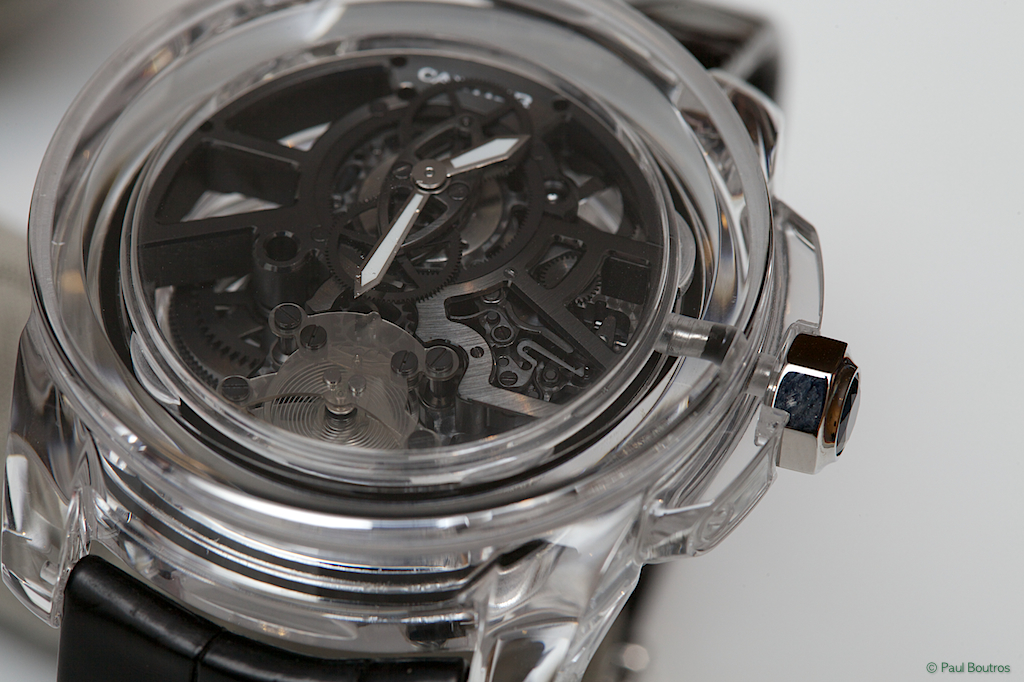 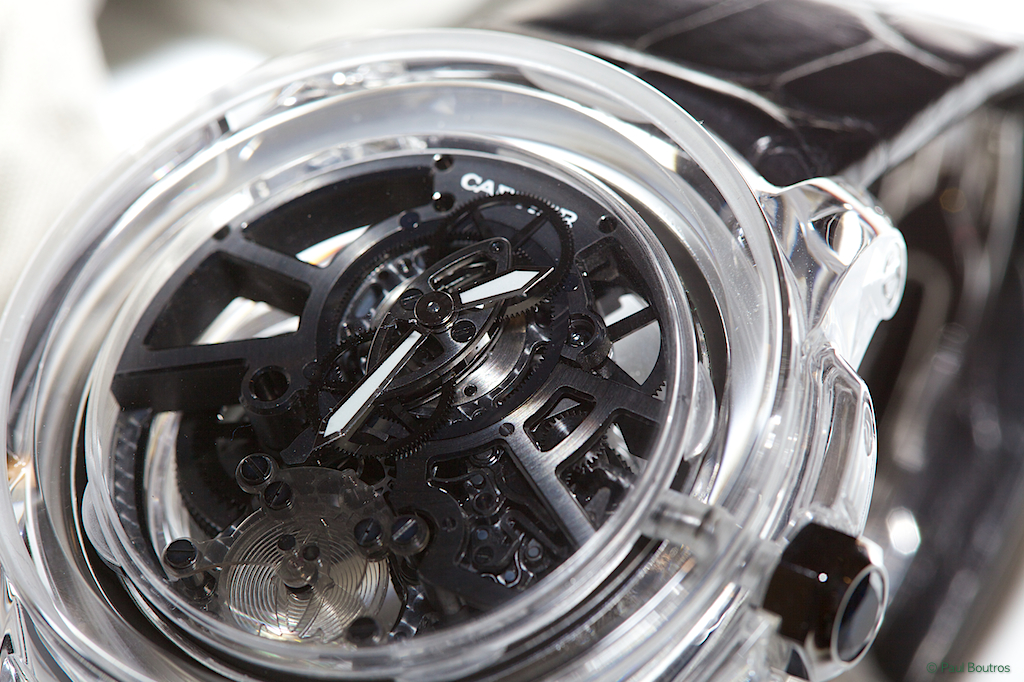 The epicycloidal differential gear is visible beneath the timekeeping hands 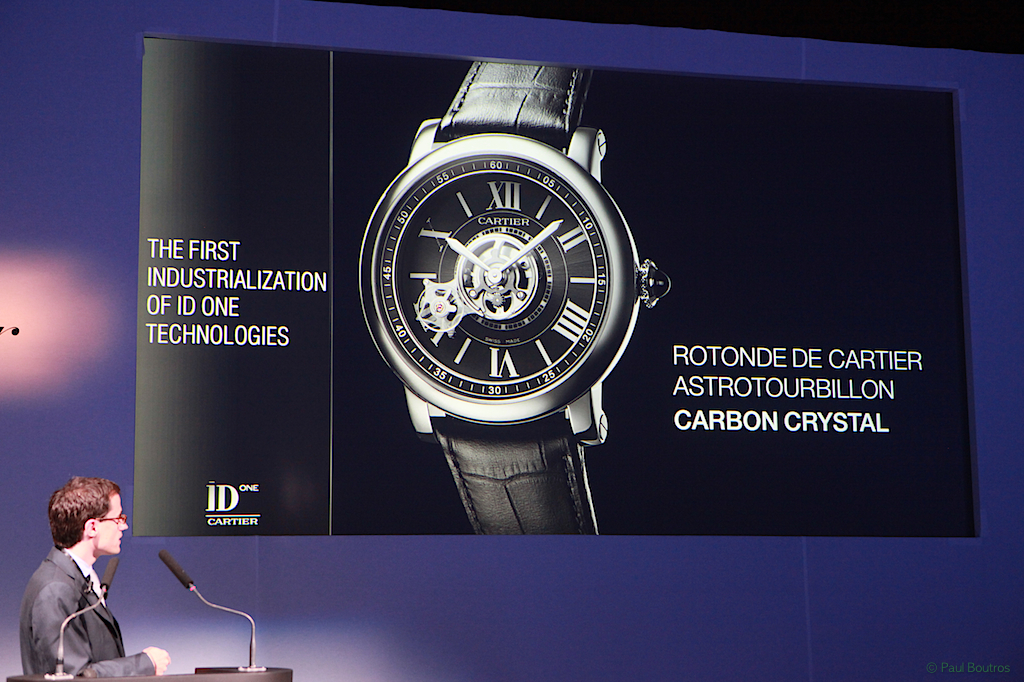 A principal objective for Cartier’s ID Concept Watch projects is for the ground breaking technologies to ultimately make their way into production watches within 10 to 20 years. Sure enough, carbon crystal elements of the ID One’s escapement will be within reach of consumers beginning next year when Cartier releases the Astrotourbillon Carbon Crystal. Fitted with carbon crystal tourbillon bridges, anchor, and escape wheel, the entire escapement is adjustment-free and lubrication free. The Rotonde de Cartier case is made of niobium titanium, the same corrosion-free, shock-absorbing, and scratch resistant alloy used for the ID One’s Ballon Bleu case. A limited edition of just 50 pieces, it will be introduced at SIHH 2013. 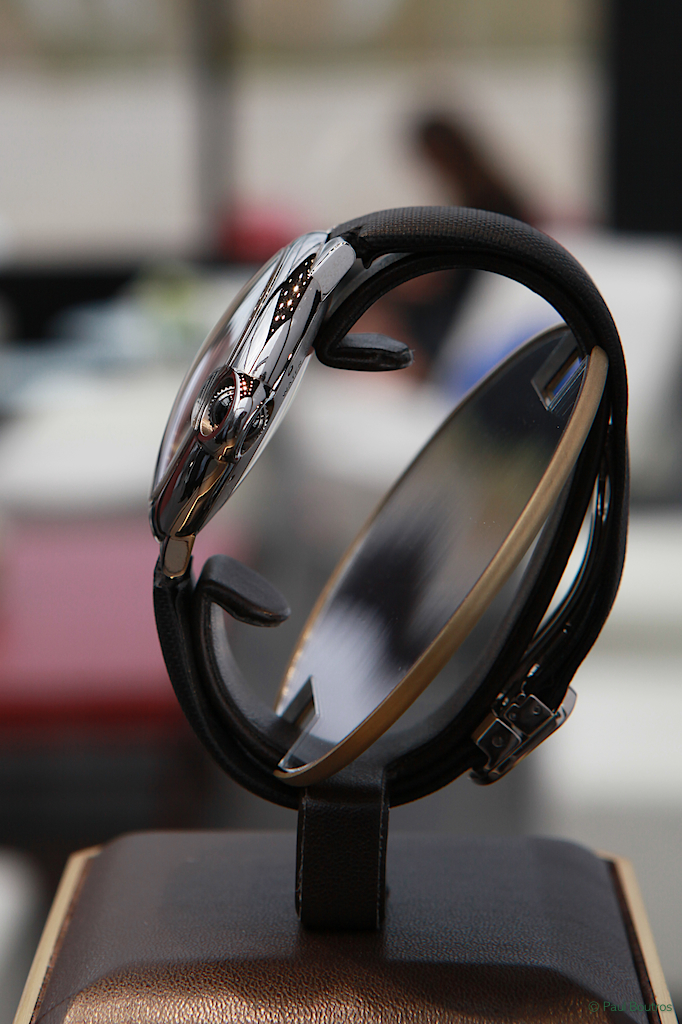 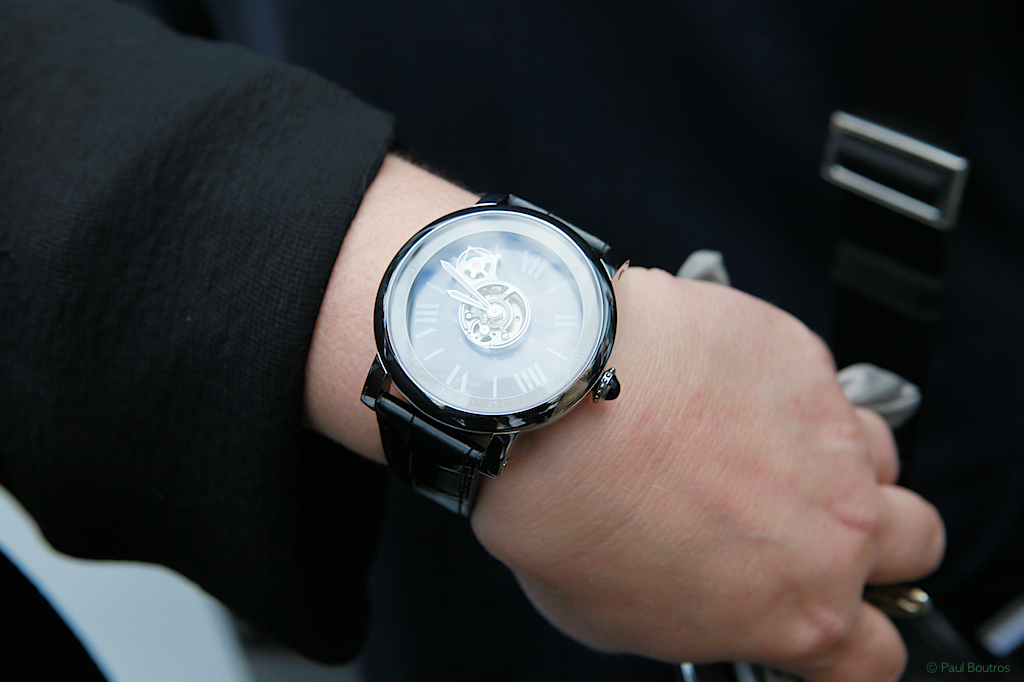 The Astrotourbillon Carbon Crystal On the wrist of the fabulously talented Carole Forestier, Cartier’s superstar watchmaker and Head of their “Movement Creation” department
Conclusion
Few watches have ever gotten me as excited as the ID Two. Yes, it’s a unique concept watch unavailable for purchase, with innovations that are years away from commercialization. Nevertheless, these innovations gave us, I believe, a glimpse into what the future of mechanical watchmaking will look like: Lubrication free operation, insanely long power reserves, adjustment free manufacturing techniques, service-free watches, and most important to me, unprecedented mechanical timekeeping accuracy in a wristwatch.

My hat is off to the Cartier “Think Tank”!