One of the things I love about watchmaking is that it is such a ‘broad church’; it covers such a wide spectrum of craftsmanship and design. In Geneva this year I met up with two gentlemen whose own eponymous brands but, whilst they both happily reside at the top of the watchmaking ‘tree’, they exemplify completely different styles.

I am talking about Laurent Ferrier and Richard Mille; it isn’t just their watches which are different, so are the men behind the brands; M. Ferrier is avuncular, bearded and bears more than a passing resemblance to Santa Claus on his days off, whilst M. Mille, is stylishly dressed, clean shaven and perfectly turned out. It is amazing how their personalities are reflected in the watches bearing their names.

Laurent Ferrier
I had the good fortune to be given a private tour of their atelier; although that might be too important a word for the place, it is a small family house, in a residential street not far from Geneva airport. 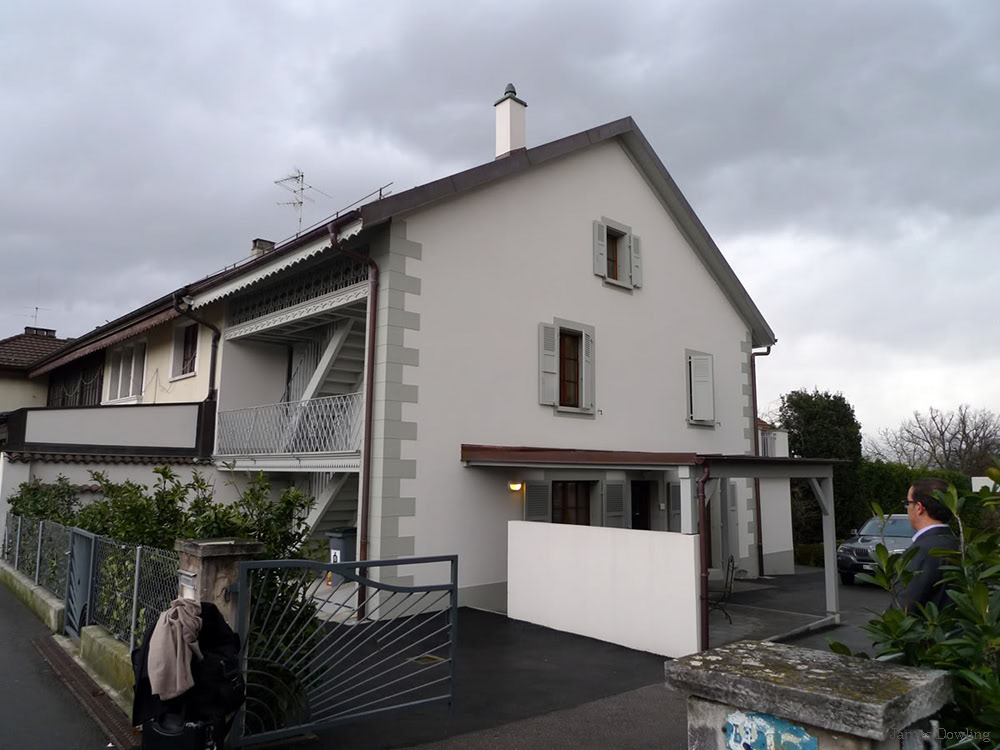 But inside, you would never know; upstairs there are three rooms, a small meeting room where I sat with M. Ferrier and his translator. 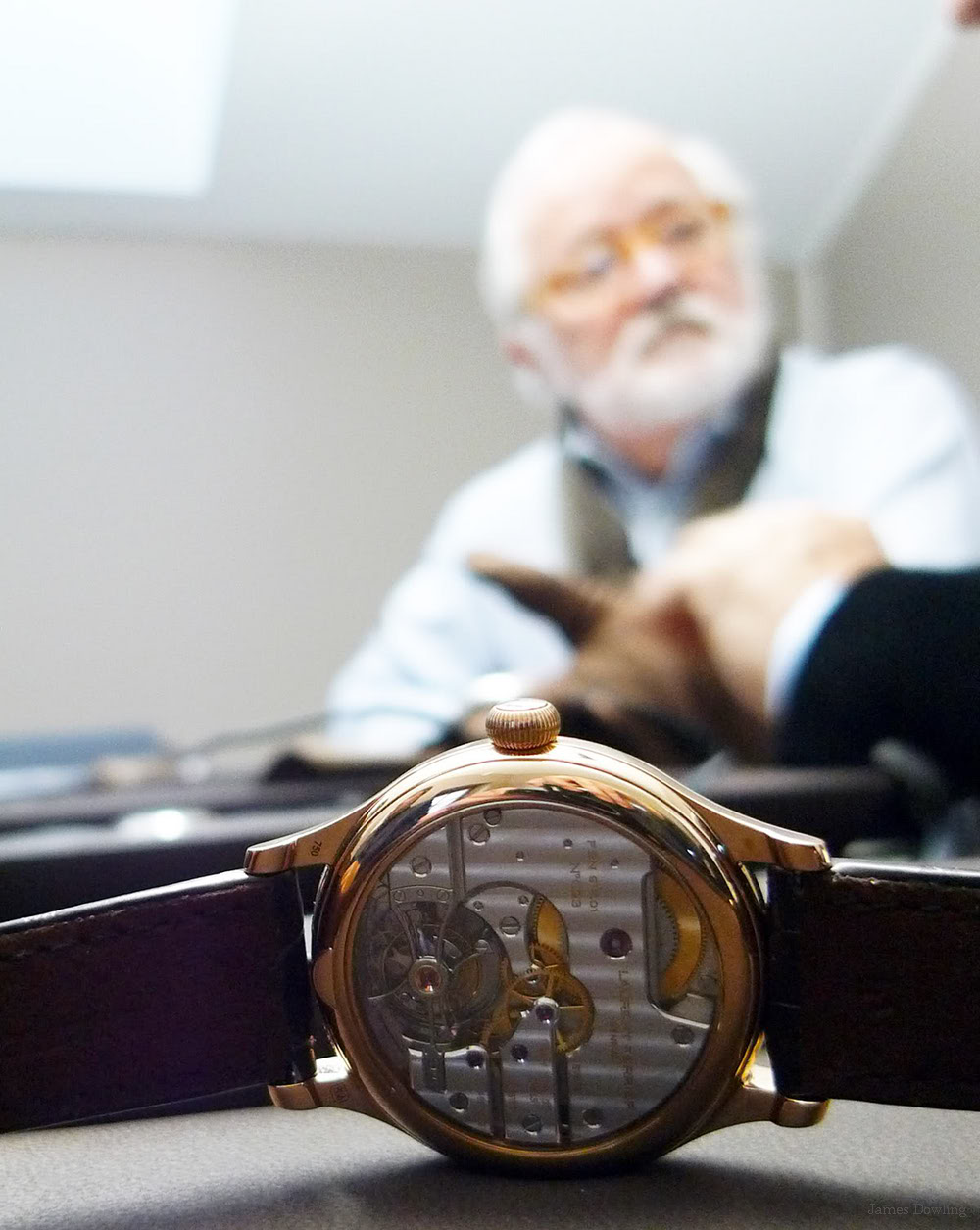 And two further small rooms where the actual watchmaking is carried out. 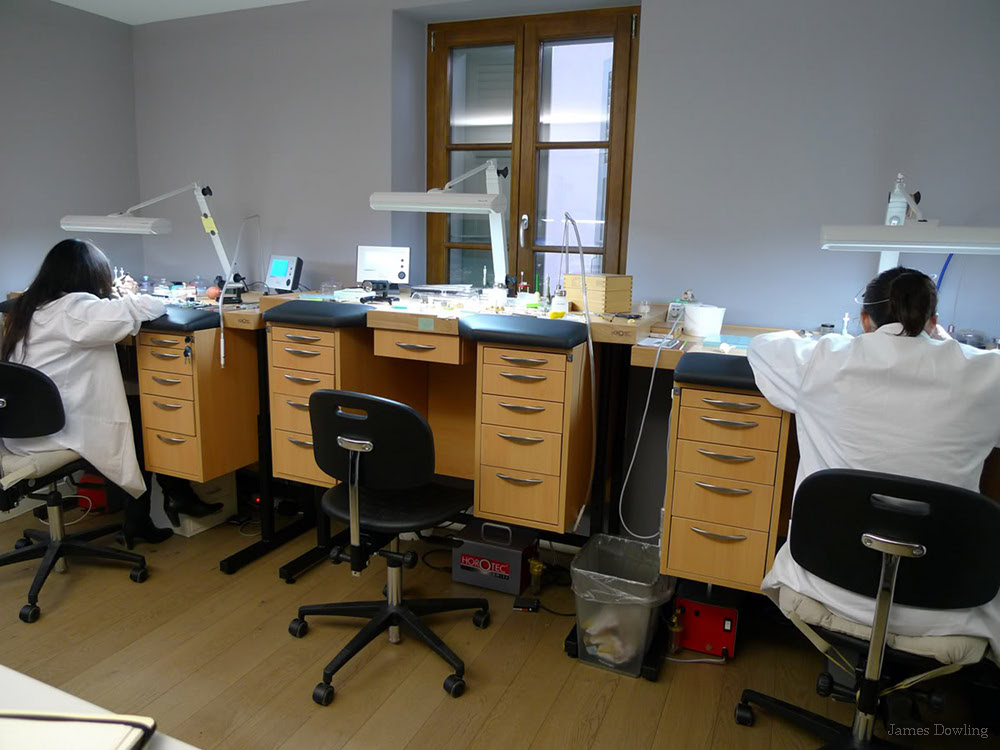 There were three watchmakers hard at work on the Gallet Tourbillion, LF’s first watch & probably the most beautiful movement in the world (IMHO). 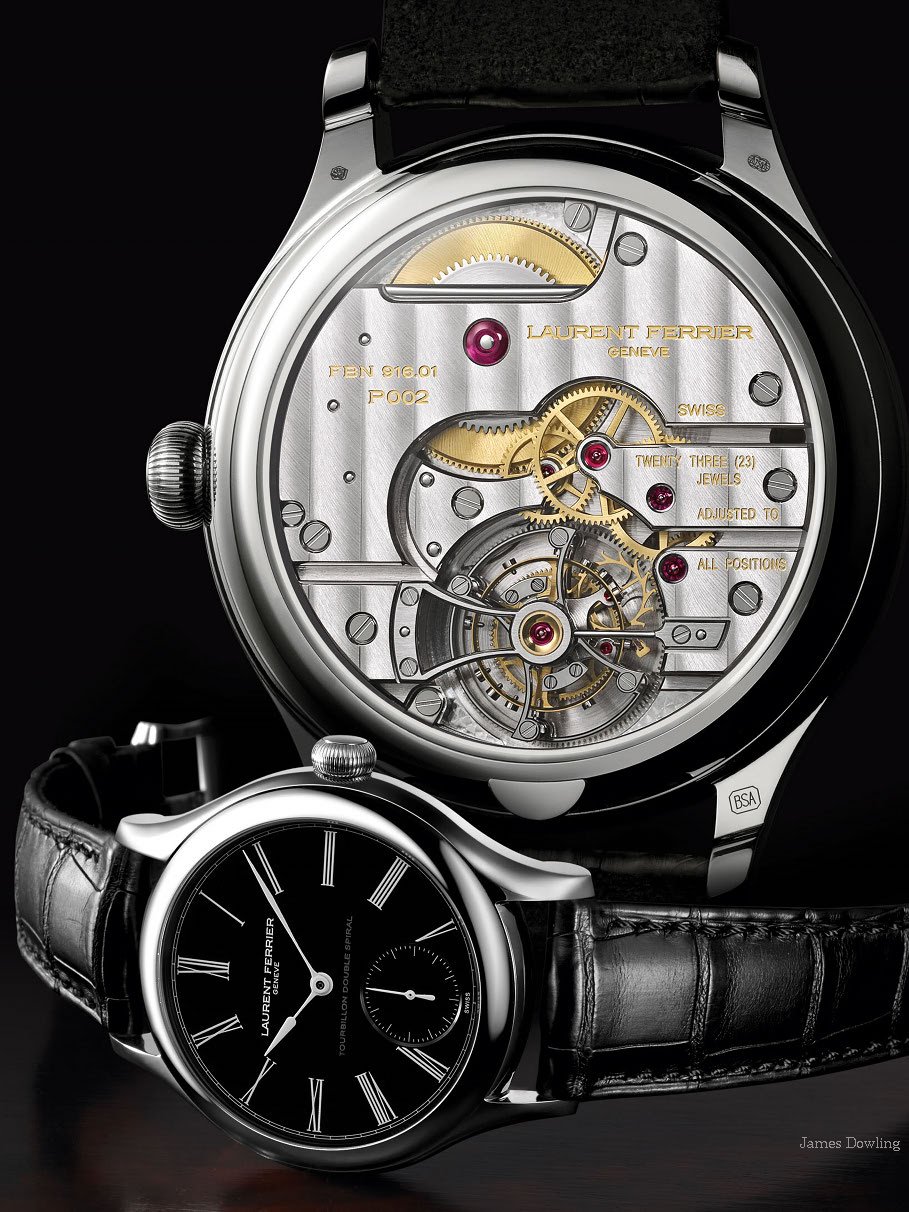 Here is the underdial work, as beautifully finished as the visible side of the movement. 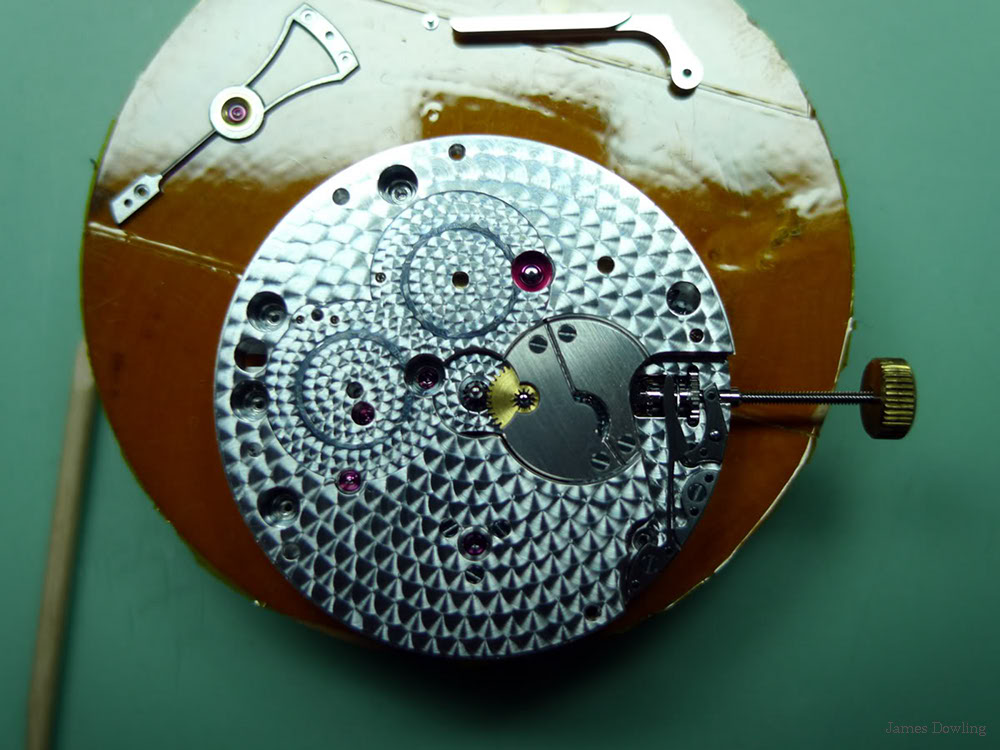 If you look closely, you will see that the tourbillion bridge has been removed and is sitting above the movement to the top left. Here is the other side of the movement. 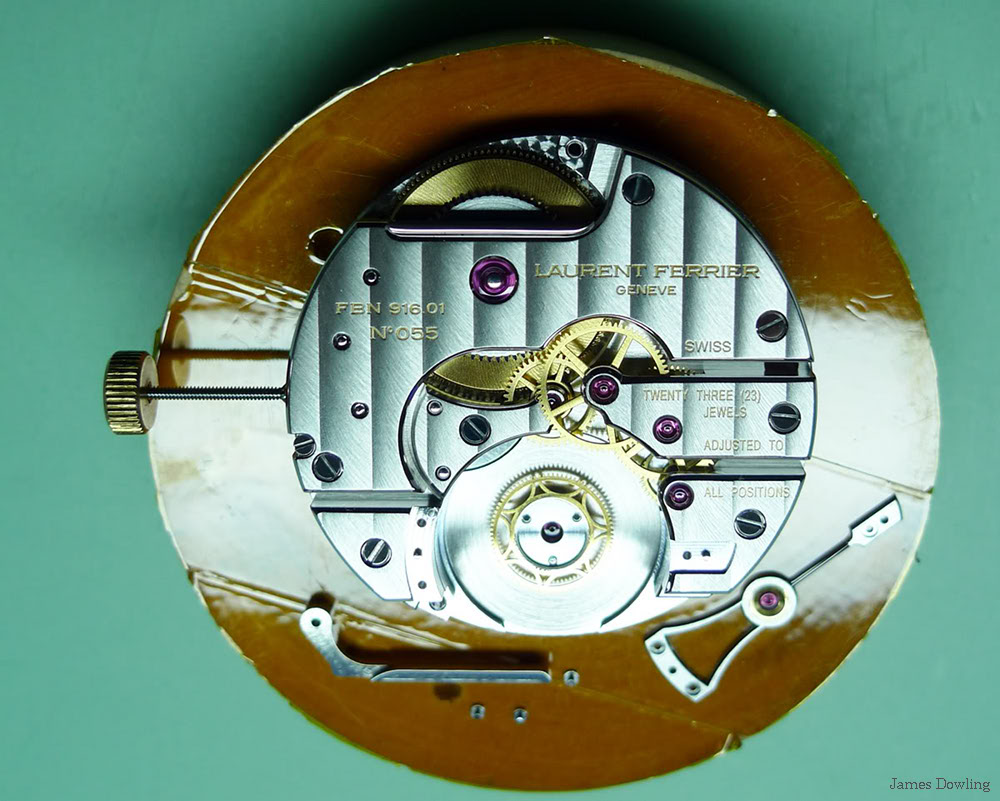 Where you can see that not only is the tourbillion bridge missing but the entire tourbillion cage has also gone, and there is a reason for this. You can’t regulate the tourbillion until it is completely finished and the regulation involves timing it in several positions and then removing it to regulate it, returning it to the movement and repeating the same procedures over & over again until the desired accuracy is achieved. However, every time you remove it from the movement, or replace it back there is a chance that you could damage or scratch the movement or the delicate bridges. So they do it rather differently at LF, they use an unfinished movement to time the tourbillion cage… 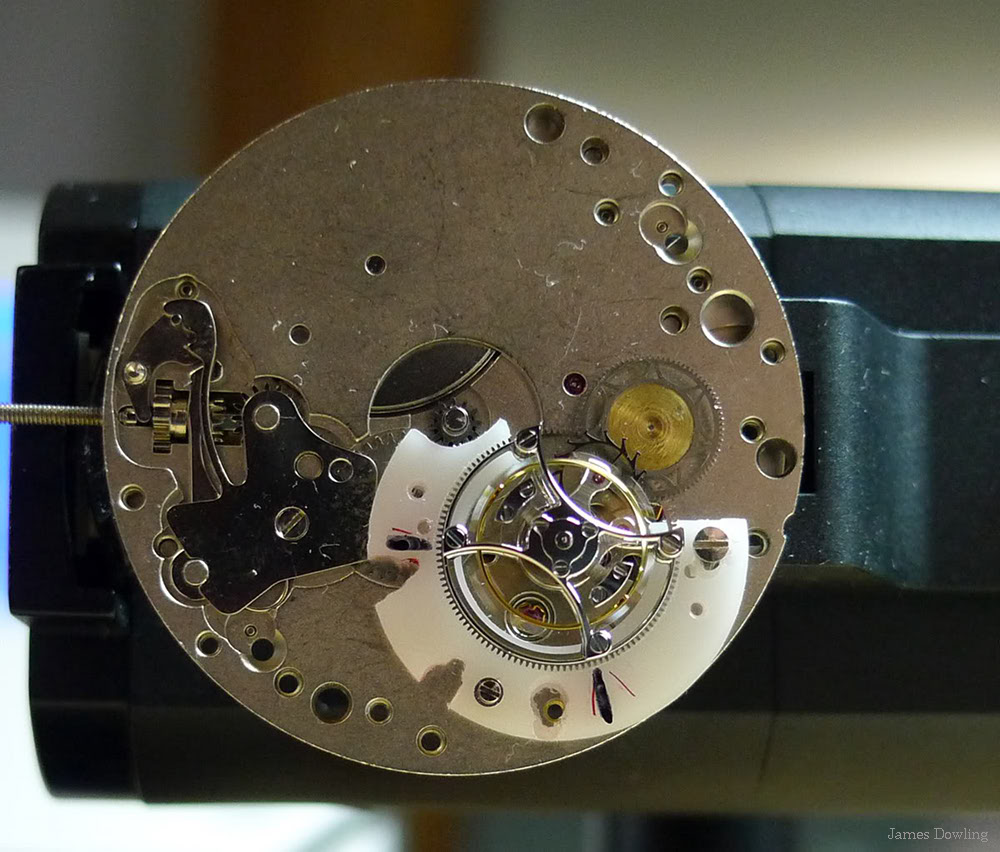 … where the odd slip of the screwdriver will not require a movement to be either refinished or scrapped. 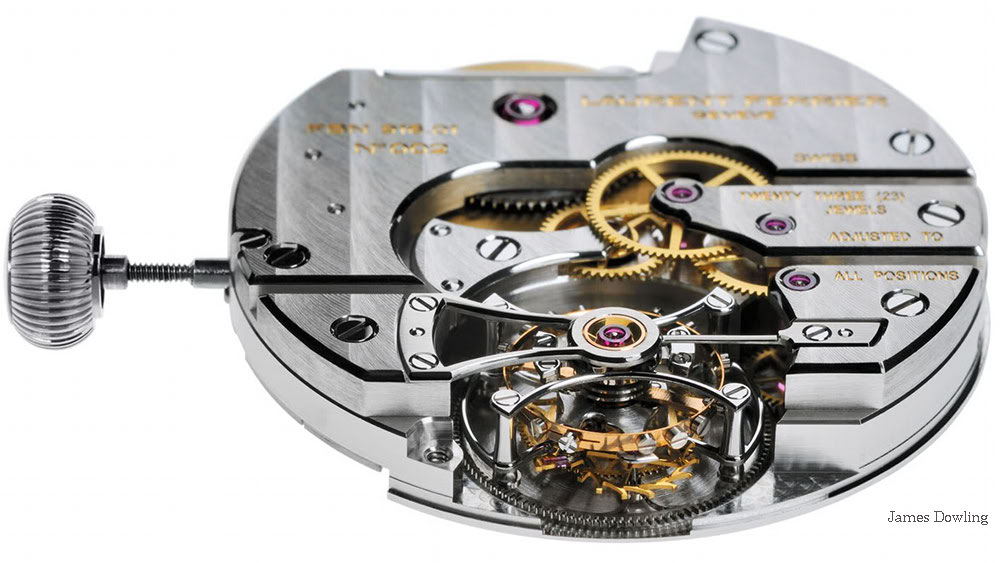 What I love about these watches is the fact that although M. Ferrier didn’t launch his brand until the second decade of the 21st century, his watches look as if they could have been made 100 years ago, until you look closely at the movements and realize that even if the styling and finishing are classic, the technology involved is very much of the moment. This is a watch which could never have existed before the invention of electro discharge machines and CNC controlled multi axis drilling machines. Meaning that these are watches which are very much of the moment, but paying a perfect homage to watchmaking’s past.

Richard Mille
The day before I met M. Ferrier, I spent an afternoon with the new watches from Richard Mille; and, if one watch exemplified the entire brand, it was the new RM 056 tourbillion with a case completely machined from sapphire. 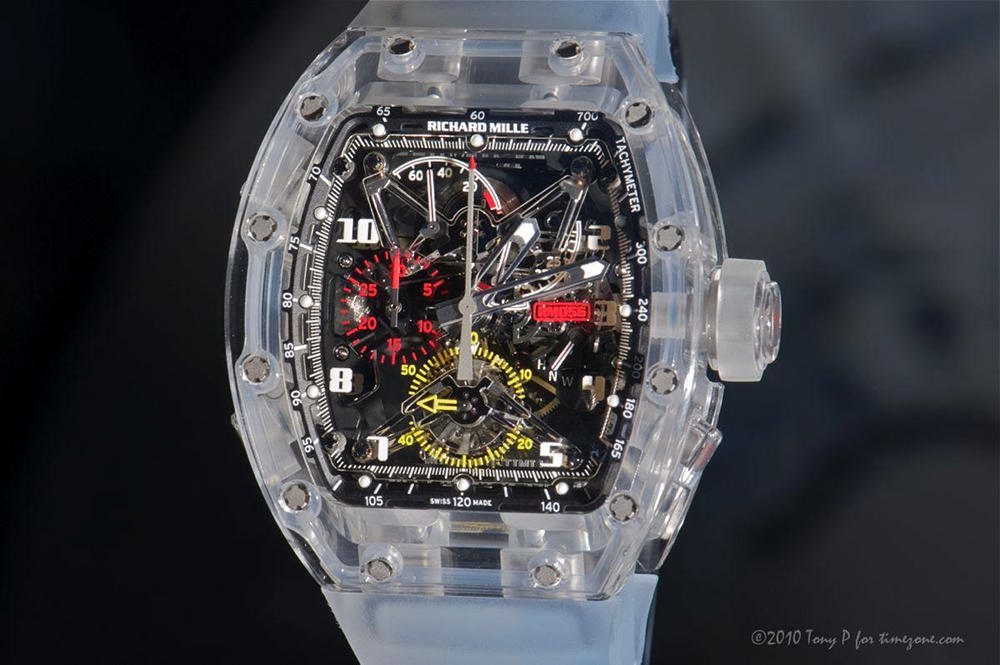 If M. Ferrier’s work can be described as ‘classic’; then M. Mille’s pieces (and this one in particular) can best be described as unrelentlessly ‘modern’. Modern, not just in its design, but in the use of cutting edge materials such as titanium in the baseplate and even aluminium in the central bridge, all of these in the effort to reduce weight. This is of course without even mentioning the entire case manufactured from sapphire.

The movement is a split seconds three register chronograph with tourbillion, in other words, just about the most complex mechanical movement it is possible to make. 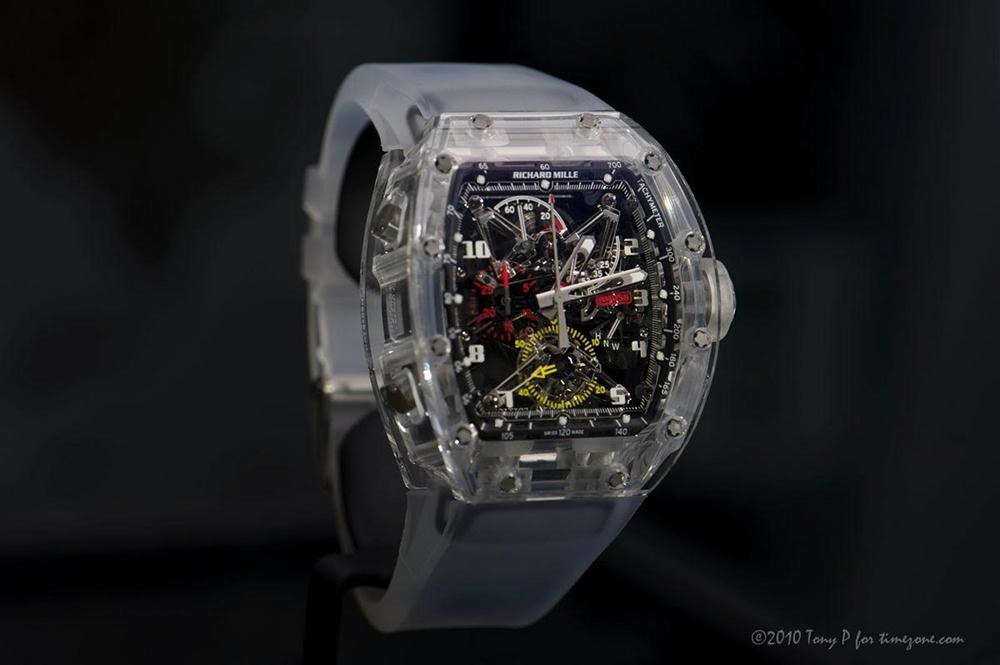 Made in a series of only five pieces, at the Salon there was much discussion about how it would take a year to manufacture those five cases and how much the watch cost (CHF 1,500,000, around $1.65 million US); to me the most interesting fact was that four of the pieces were sold within an hour of the Salon opening and the only reason that all five were not sold was that M. Mille held back one of them for a good client who couldn’t make the show until the next day. The client arrived as the show opened the following day and within an hour, M. Mille confirmed that now all five had found patient, but obviously wealthy owners. 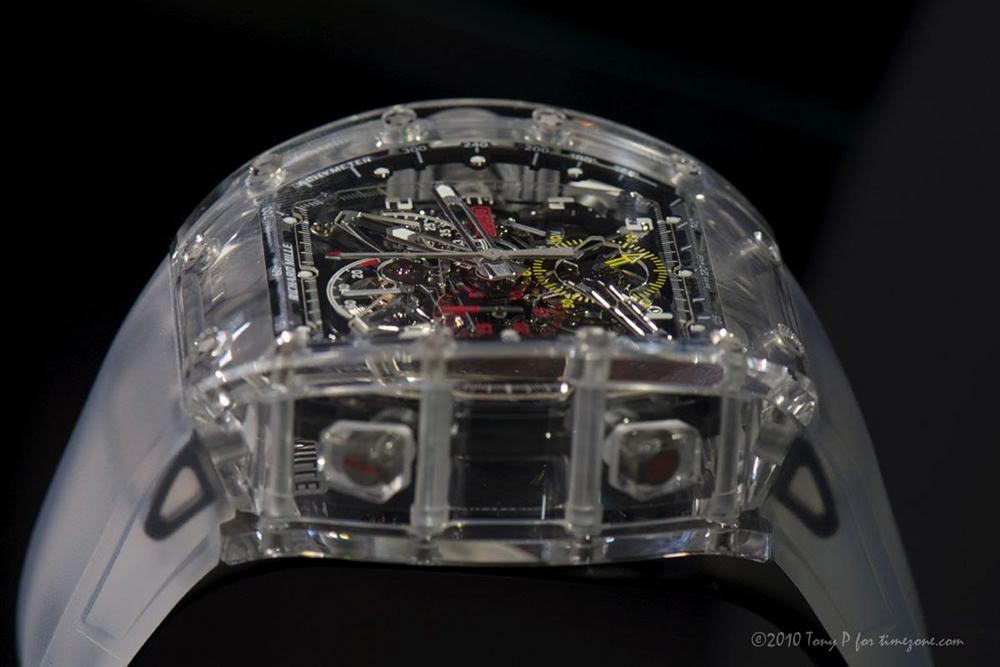 What intrigues me about this watch is not the technology behind the case, or even that involved in the movement; what is interesting to me is that there are people prepared to pay these sums of money for a watch which only they will know is special (above and beyond the ‘normal’ split seconds tourbillions, of course), as to almost the entire world, it looks as though it is made of plastic.

I don’t think that you could find two more different examples of the watchmaker’s art; yet both can find a place, both can succeed and both show that 21st century watchmaking is in safe hands.