Legion d’Honneur: A Visit to Bell & Ross by EDWARD HAHN

This past couple of weeks I had the good fortune to be in Paris. Aside from the usual sightseeing and gastronomic opportunities, I had the pleasure of being able to sit down for a few hours with Carlos Rosillo, co-founder and CEO of Bell & Ross, and a few days later to attend a very important ceremony honoring him. 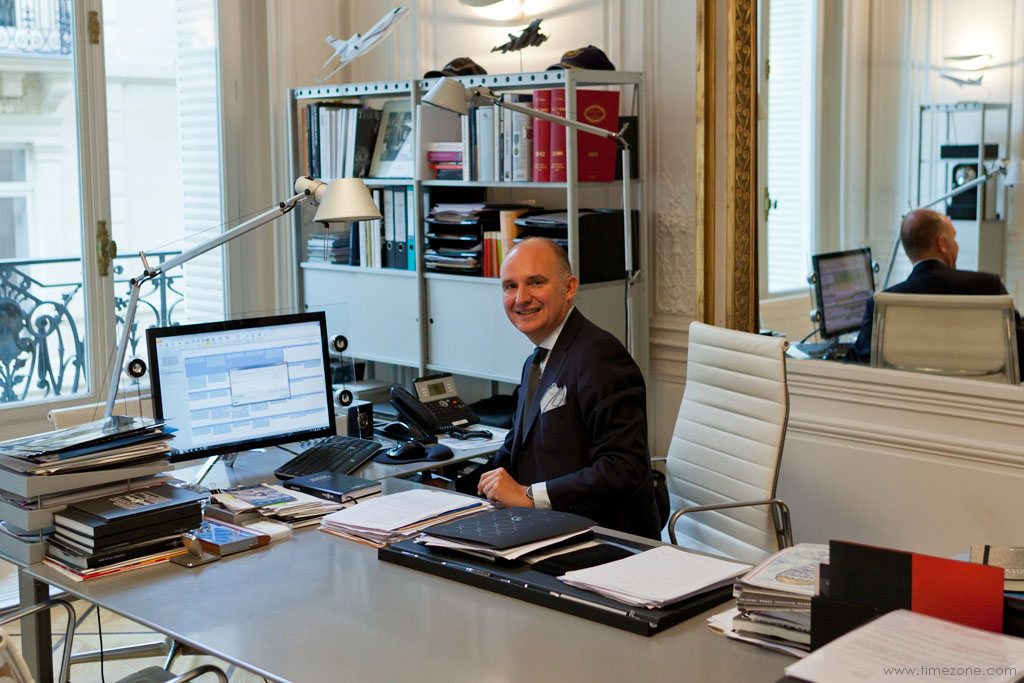 I was greeted by Mr. Rosillo in the lobby of the new headquarters for Bell & Ross, located in a quiet neighborhood between the Arc de Triomphe and the Trocadero in the 16th arrondissement. This five story building was built in 1888 for Count Montalvo, a well-known Ecuadorian writer and exile, who stood for democracy and against the spread of dictatorship.

Designed with the typical “Haussmann” facade of the period, the building has graceful wrought iron balconies offsetting the smooth white cut-stone construction. Bell & Ross have renovated the interior to reflect the clean and functional design aesthetic which characterizes the brand’s offerings, and have occupied the space for about a year now.

The lobby is adorned with an F-84 cockpit from 1955, complete with an instrument panel full of gauges similar to those that have been the inspiration for many of the brand’s offerings over the years. Incidentally, the cockpit was purchased at an auction where 3 B&R watches were sold at prices far above estimates; the proceeds of the sale were sufficient to pay for the entire cockpit! 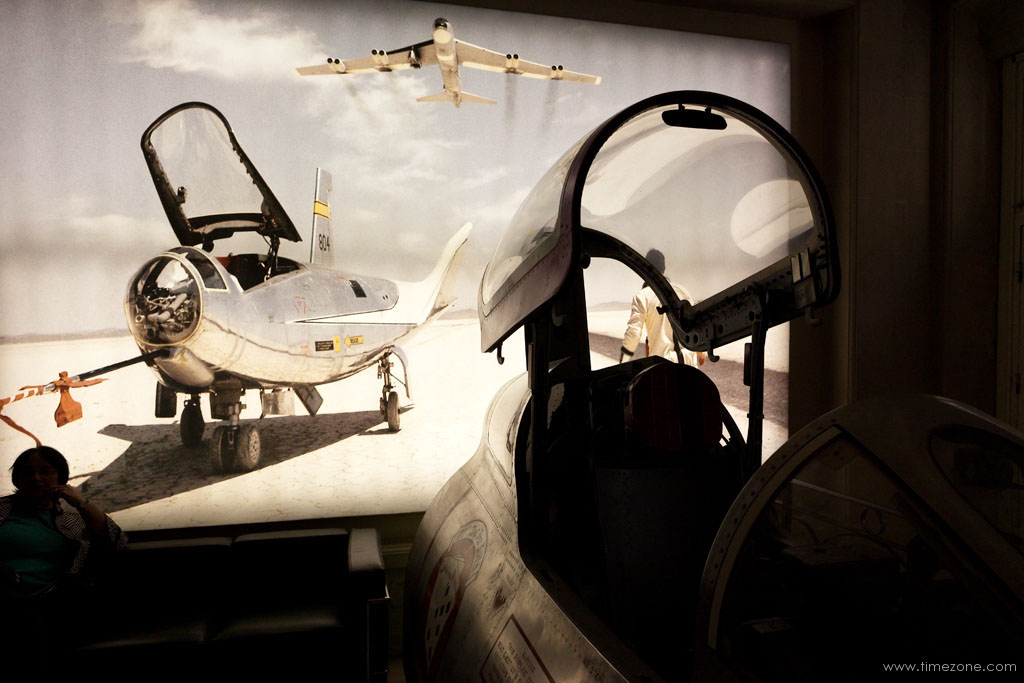 Mr. Rosillo led us into a completely glass enclosed elevator to take us to the top floor, where the creative department is located. Here the visual aspects of the company’s public face are controlled, from the watches themselves, to the advertising and package, along with the graphic design for their publications and online presence. 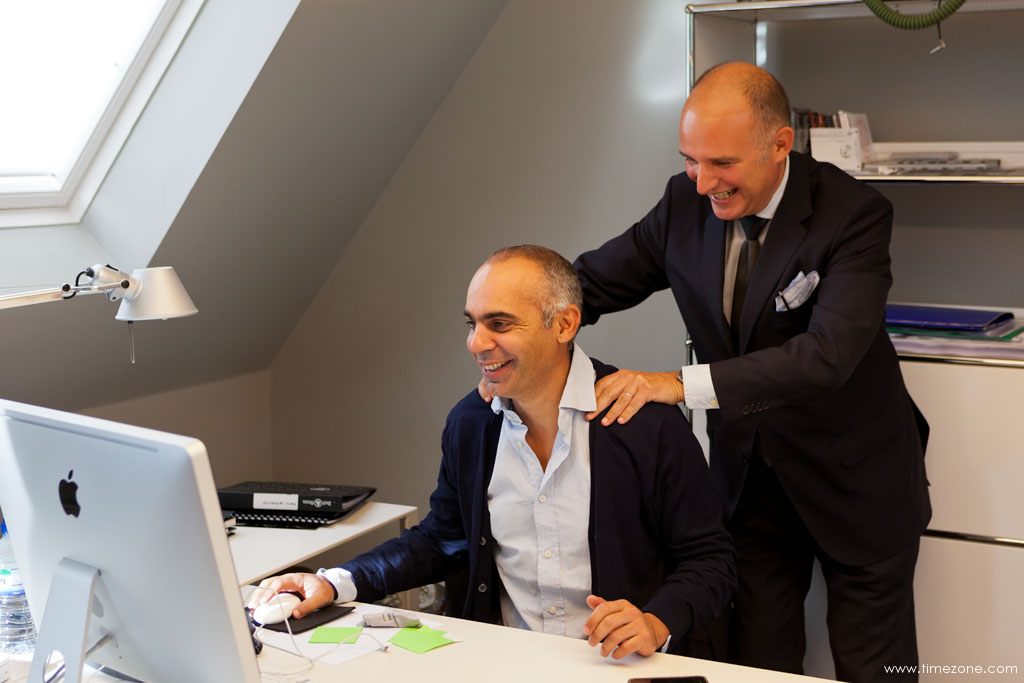 Here we met Mr Bruno Belamich, the co-founder and the design chief for the brand. His office is filled with design inspirations: flight suits, helmets and oxygen masks, vintage photographs, and aircraft instrumentation.

Mr Rosillo and Mr Bellamich first met when they were 15 years old, while attending secondary school in Paris. Mr Rosillo was a Parisian of Catalan descent, while Mr. Belamich hailed from the Burgundy region. They became fast friends at the time, and kept in touch when they left for university: Carlos for business, Bruno for art and design. After a few years, they reunited to form their company, using a combination of parts of their last names (BELamich and ROSillo) to form a brand with global name appeal.

Helmut Sinn, founder of Sinn watches in Frankfurt, Germany, was an early mentor and collaborator with the two neophytes. The earliest series of Bell & Ross watches was manufactured by Sinn, with both companies’ names appearing on the dials. Later, once the company was standing on its own feet, they were able to create their own production facility (currently in La Chaux-de-Fonds in Switzerland), but they have never forgotten their debt to Sinn.

Other floors of the headquarters contain the other departments of the brand: graphic design / catalog, communications, logistics, accounting, and the Asian and European sales division (the Americas have separate sales offices in the US).

Mr. Rosillo has his office located one level above the ground floor (note the wrought iron balcony and the elegant wall carvings), next to a conference room decorated with with letters received from Presidents Nicholas Sarkozy and Bill Clinton, US Marine Corps General / Supreme Allied Commander Europe James Jones, and other dignitaries. 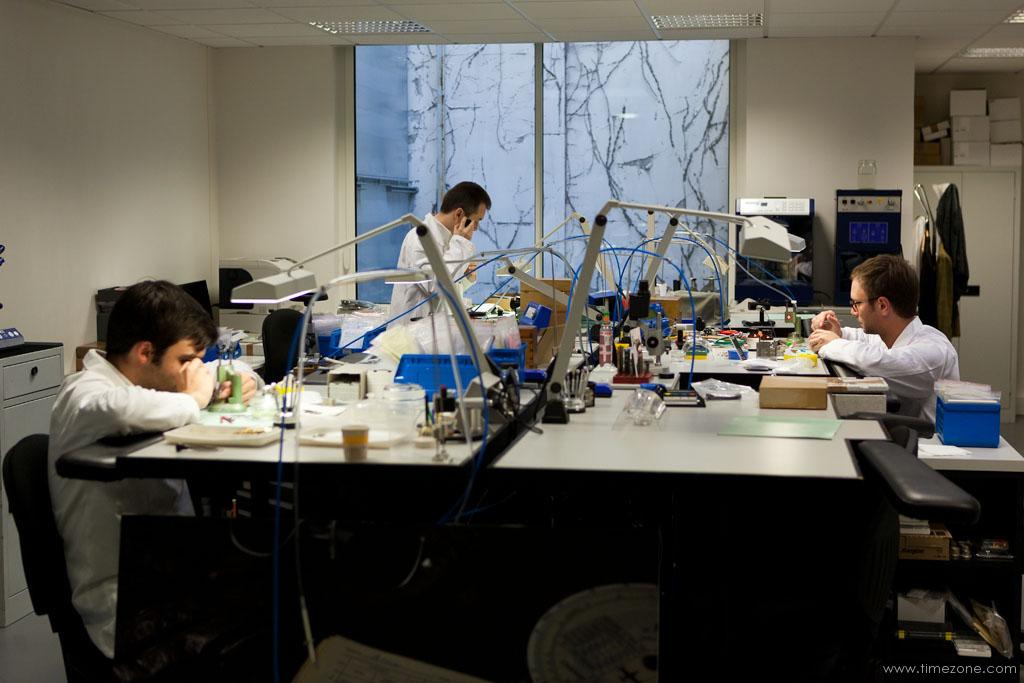 On the ground floor, the After-Sales Service department is located adjacent to the lobby and presentation room, with three watchmakers on duty during our visit. All service visits back to the “factory” are actually performed here in the Paris HQ.

Part 2: The Watches and the Brand

With the tour of the building complete, we then returned to the presentation room, where we were given an opportunity to see the entire B&R collection on display in various showcases. Some highlights: 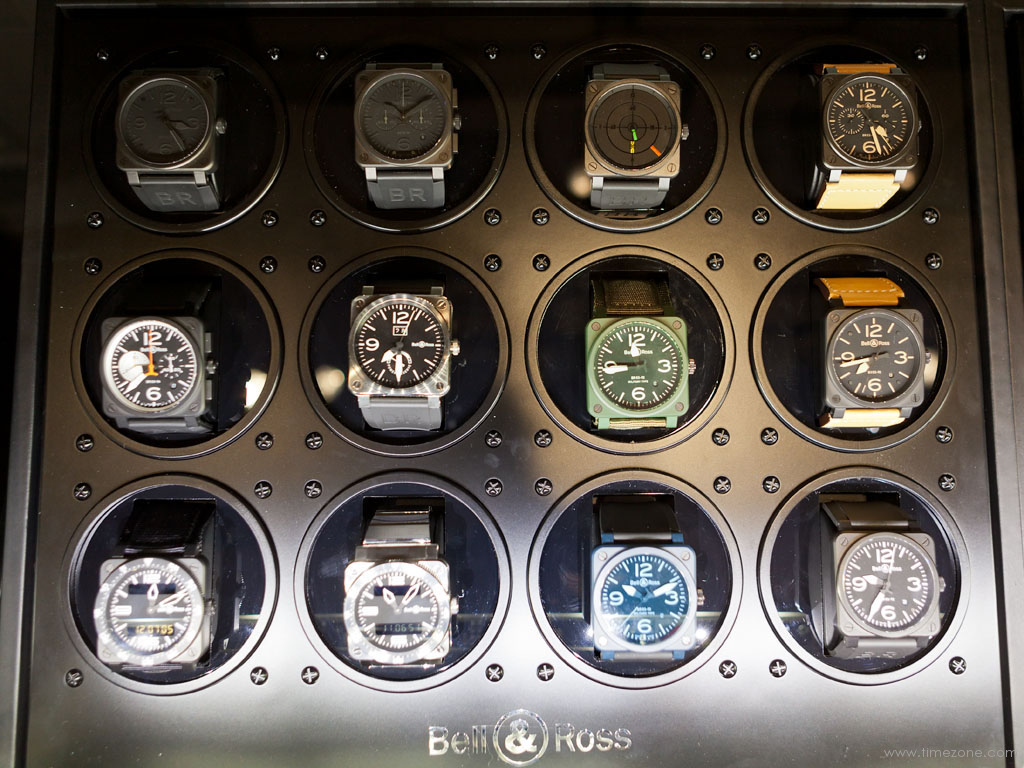 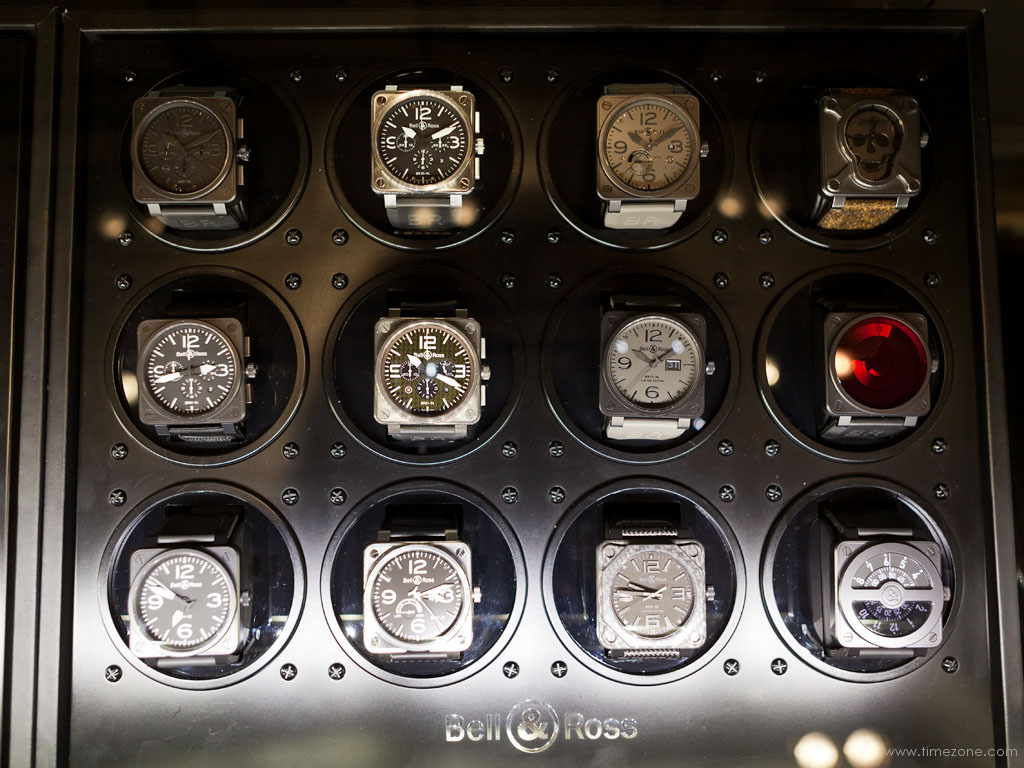 Mr Rosillo gave a short talk about how their line now reflects the historical evolution of the military watch, from the pocket watch (PW1), to the modified pocket watches worn on the wrist during the First World War (WW1), to the famous pilot watches of the Second World War (WW2, Vintage 123/126), and finally the BR Instrument line, from the early jet age (Heritage) to the contemporary digital/analog Type Aviation.

One special showcase highlights several models that B&R has done in association with various French agencies: 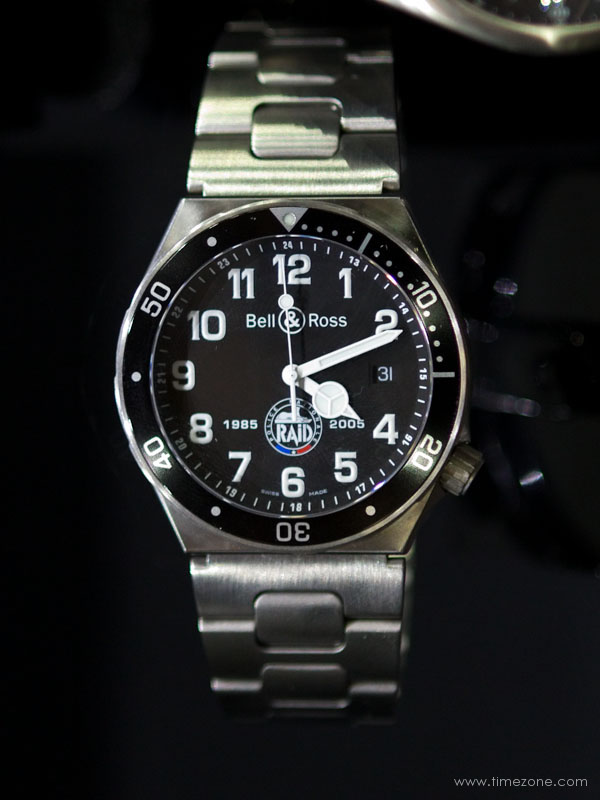 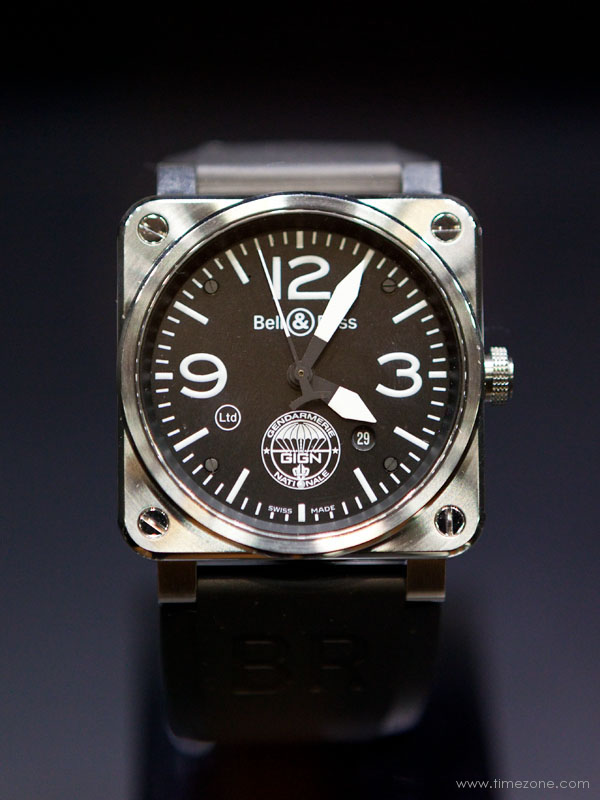 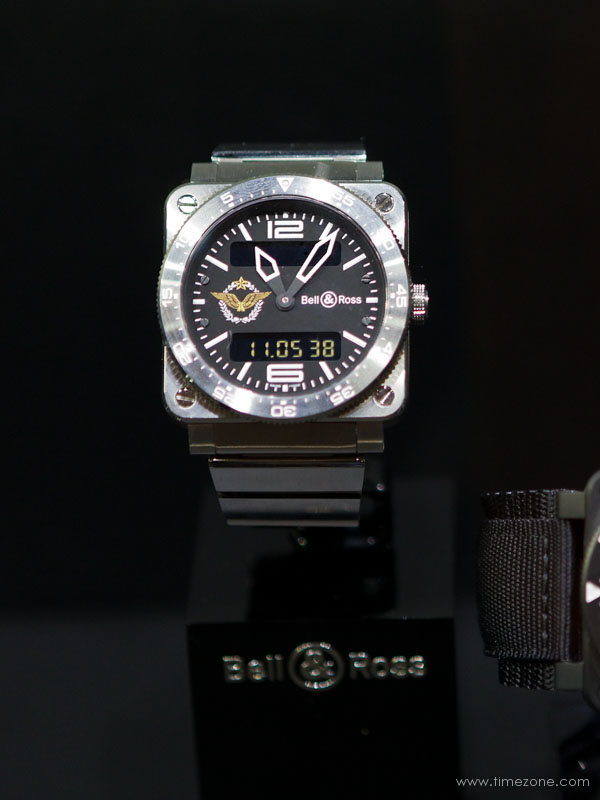 Sitting down around a coffee table, I had the opportunity to ask Mr. Rosillo a few questions about where the brand is now, and where it is headed.

– Regarding the global financial crisis since 2008, Mr Rosillo saw it as an opportunity to better position the brand. In fact during the worst years of 2008-2009, they were able to improve marketshare relative to their competitors. As a small company, they have put together a very good team with a positive approach toward facing challenges. They maintained focus on what has been successful for them: designing and building distinctive wristwatches with a consistent theme. For the future, they will continue to focus on this course as the economic outlook remains unstable and unpredictable, and adapt to the economy as necessary. 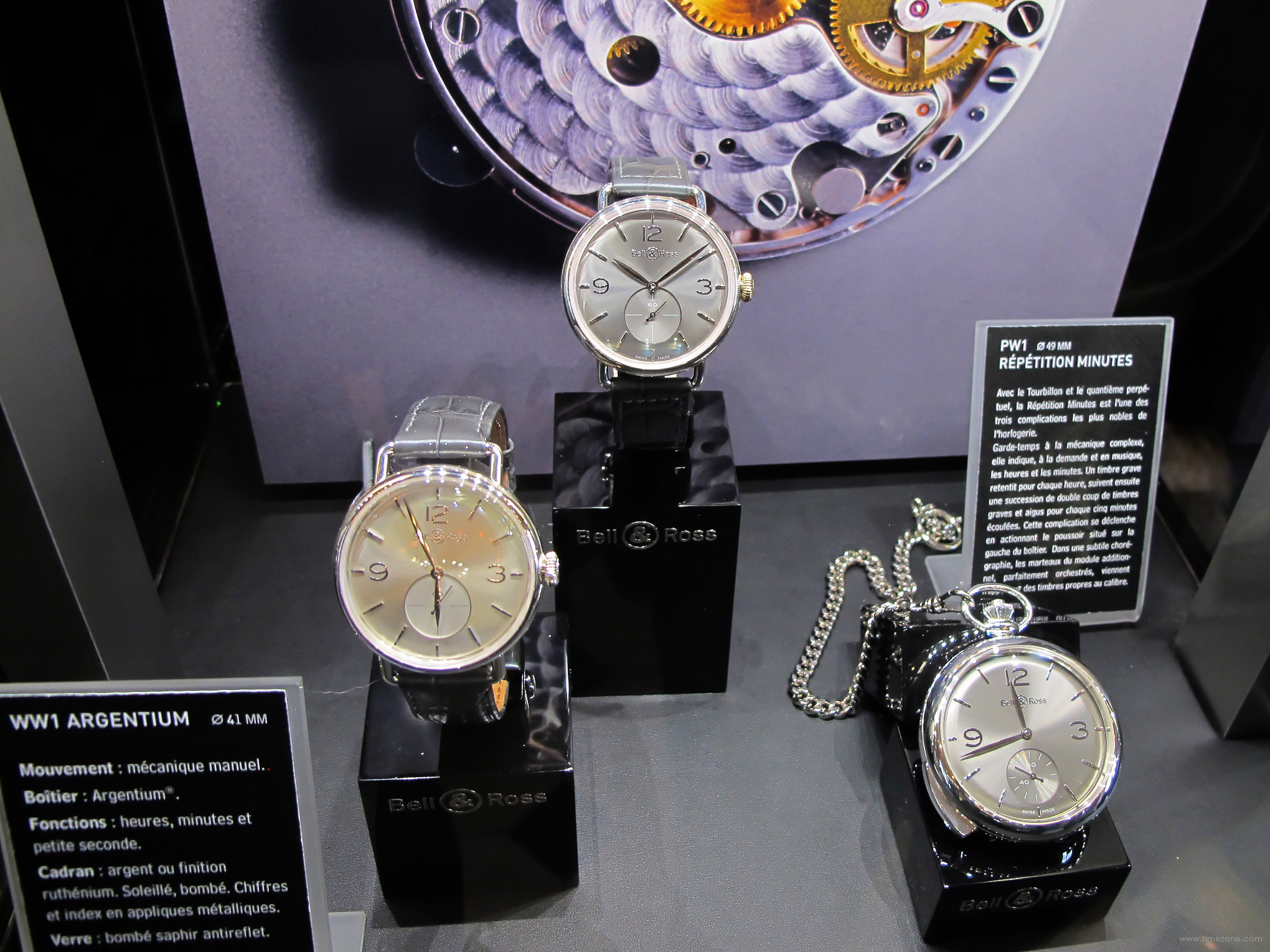 – Innovations in the last several years include the use of Argentium, which is an alloy of silver (96%) with 1% germanium. This material has higher silver content than Sterling, yet has superior anti-tarnishing properties. With Argentium, they have the ability to offer watches in a precious metal at a good value. 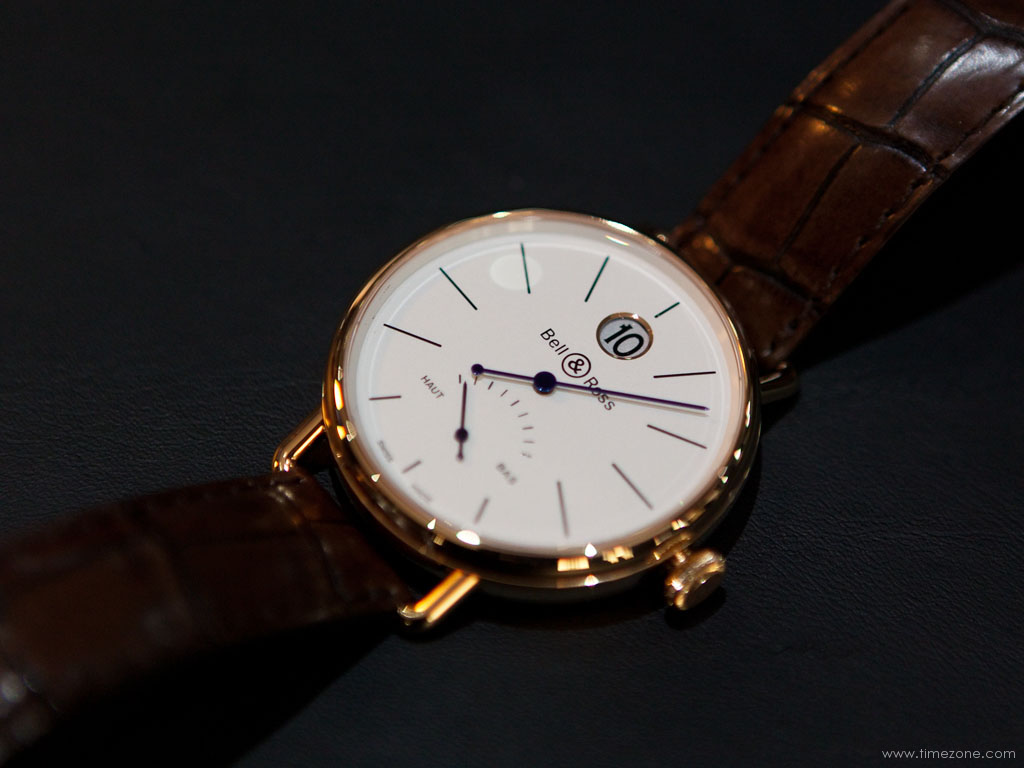 – While steel and ceramic cases remain the backbone of the product line, gold and platinum are used in complications. For example, the limited edition Heure Sautante (jump hour) watches developed with Vincent Calabrese, in the WW1 case. These special pieces are made for the special set of collectors that can appreciate both the precious metal case, and the special movement contained inside.

– B&R is very open and transparent about the sources of their movements. They believe that ETA movements for the majority of their product line is entirely appropriate, and in fact speaks to what their customers are looking for. This allows them to provide a watch with everyday wearability and style at a good price point, with a reliable movement, resulting in an excellent overall value. Mr Rosillo strongly believes that developing a large-series manufacture base movement would be the wrong direction for B&R – not only would this mean they would need to charge double for their products to offset the development cost, but that the resulting movement would in all likelihood be less reliable than the highly refined ETA alternative. 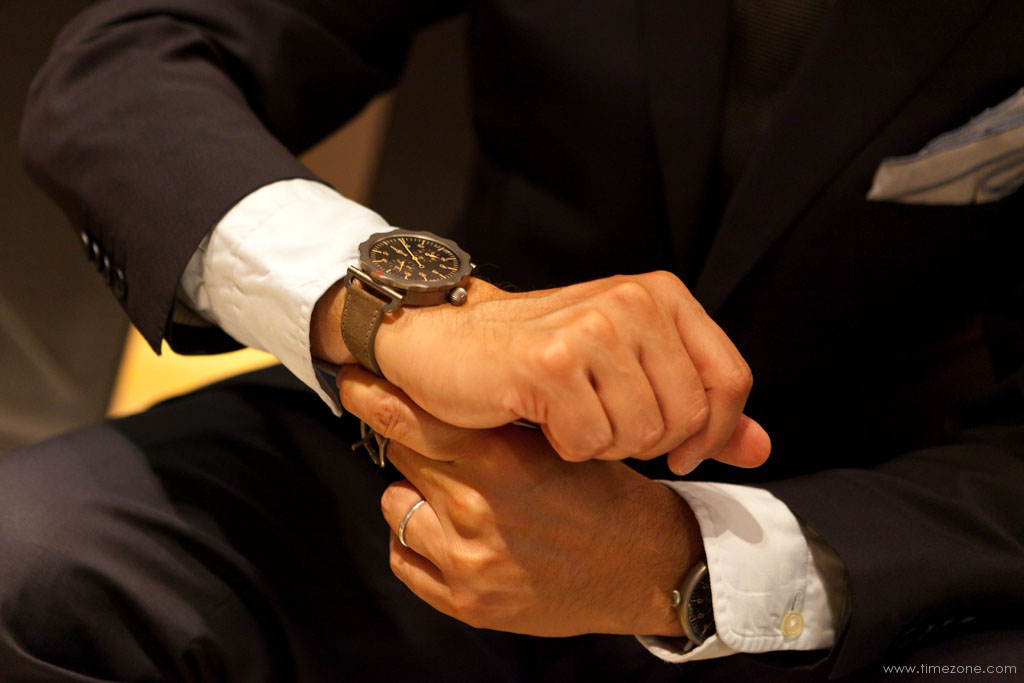 – For the collector that desires something a little special, B&R continues to work with specialists such as Vincent Calabrese, La Joux-Perret, and Dubois Depraz. They have commissioned several movements to their own specification, such as the Dubois Depraz designed Vintage WW2 Regulateur, custom developed to provide a harmonious dial layout on a very large (49mm) watch. 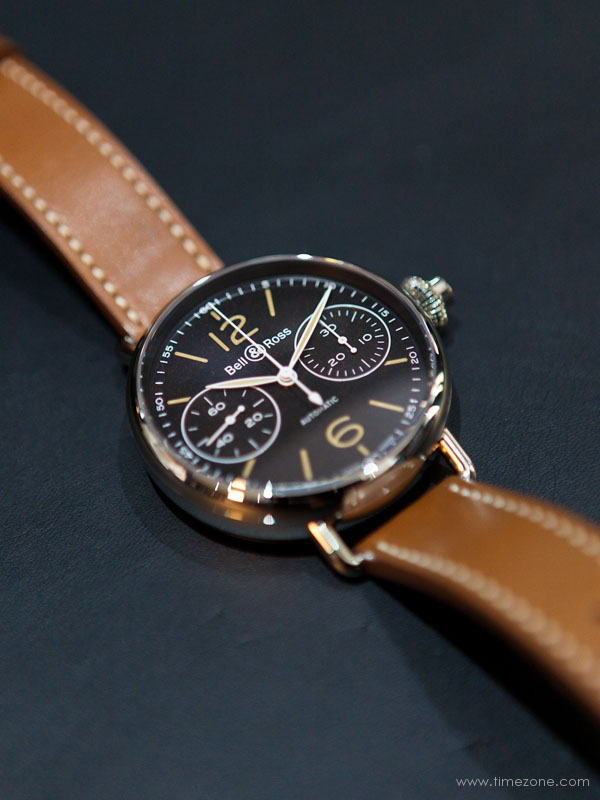 – The new WW1 Chronographe Monopoussoir was developed to B&R specification by La Joux-Perret so as to provide perfect subdial placement on this large (45mm) two-register chronograph. This watch is a step up from the regular chronograph offerings in other parts of the product line.

– Mr. Rosillo is not so concerned about loss of movement supply from ETA. He fully understands the Swatch Group’s need to take care of their own brands first. That said, he believes that their brand’s long-time philosophy has helped them form a strong relationship with ETA – they have always been open and up-front in their promotional material that their watches contain ETA movements, and that the Swatch Group appreciates this transparency.

– For next year at Basel, expect to see a new booth layout from B&R. Also, expect to see additional novelties in the Instrument line, and continued development of the WW1 and WW2 cases.

With that, we adjourned for a light lunch at a nearby restaurant, followed by a visit to the B&R Boutique located in the Village Royale, adjacent to the Place de la Madeleine and surrounding upscale boutiques.

Meeting us at the Boutique were Romain Sabbagh, Julien Gudziewicz, and Medielle Couturier. The retail boutique carries the majority of the B&R lineup in its cases in a very upscale and spacious setting. Both are very knowledgable about B&R watches, and in fact Julien was recruited from the B&R collector community in France.

A few of the highlights of the collection: 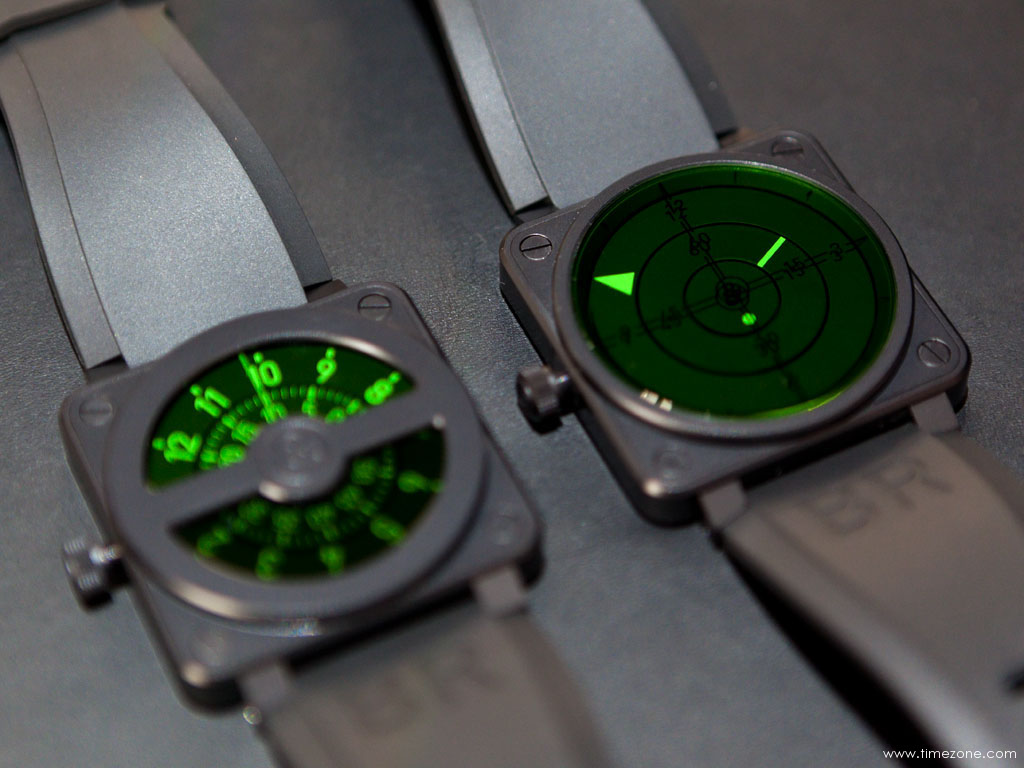 Special Jakarta Boutique editions of the Compass and Radar 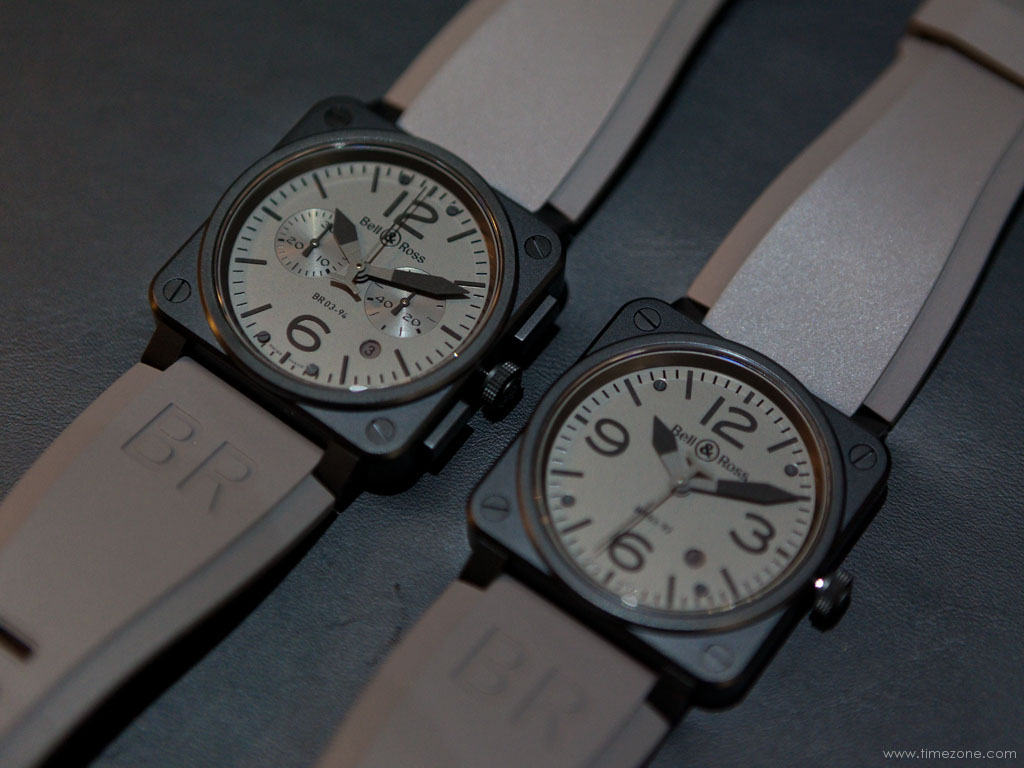 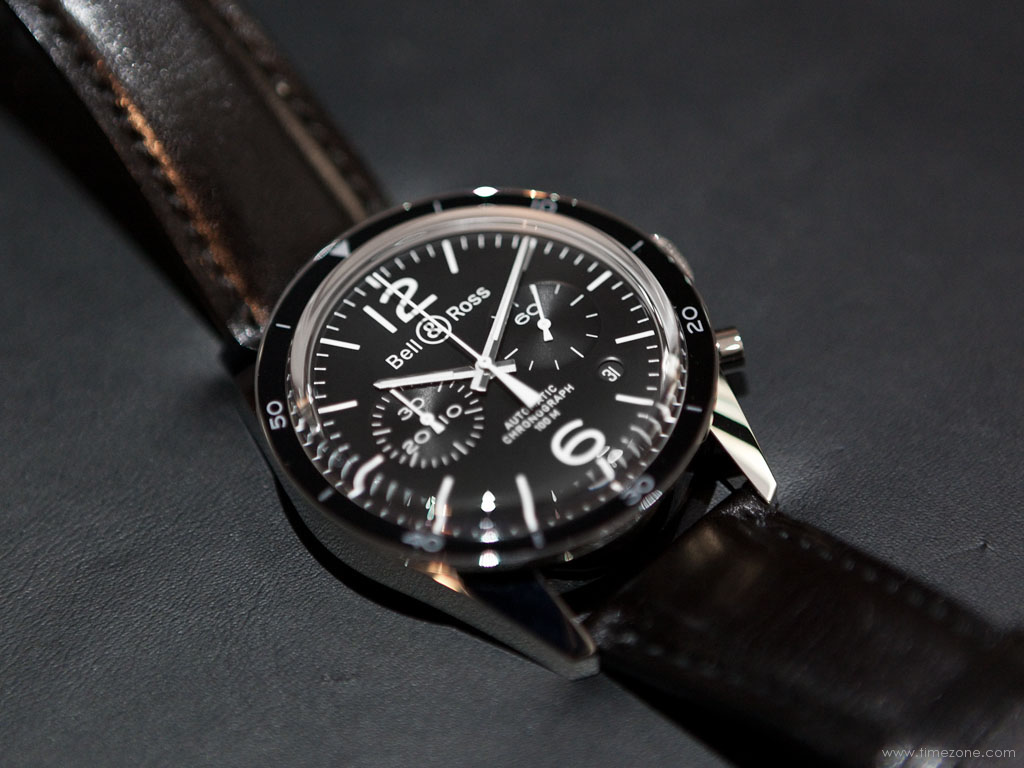 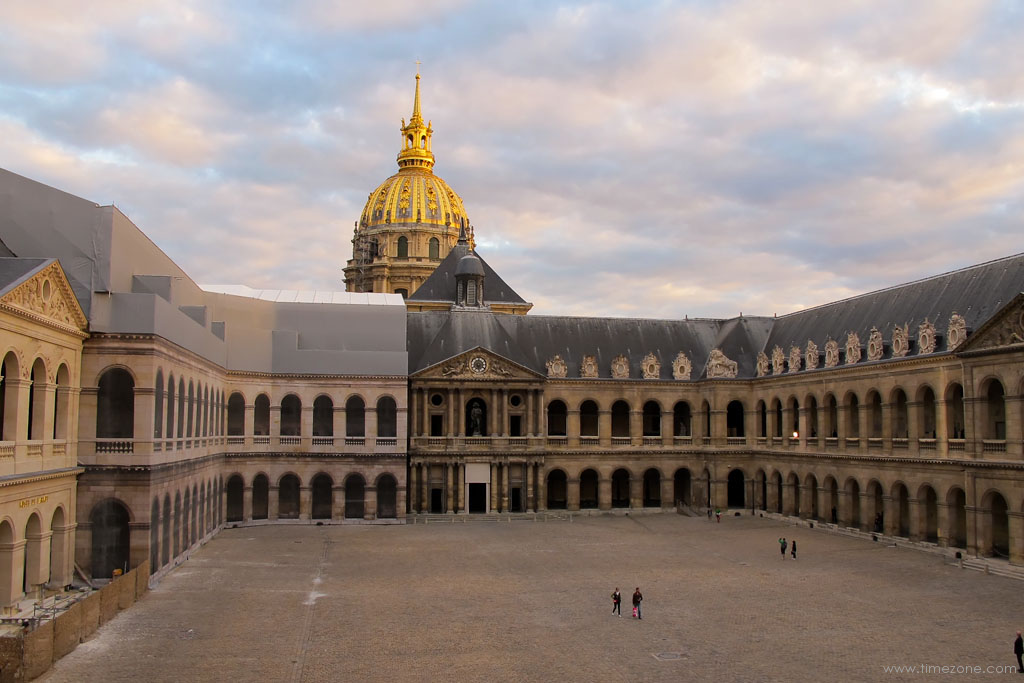 The third segment of our Paris journey took place several days later. Normally, Bell & Ross holds a party in the autumn with their employees, to celebrate the accomplishments of the past year.

This time, however, was extra special: first, by virtue of the venue – we were at the L’Hotel National des Invalides, which contains several state museums and monuments related to French military history, including the tomb of Napoleon Bonaparte.

More importantly, we were here to witness Mr Rosillo receive the rank of Chevalier (Knight) of the National Order of the Legion of Honor, the highest decoration that France can give to a civilian. Created by Napoleon, it is only given in recognition of outstanding contributions to French society, over the course of a minimum of 20 years of professional life. This is an outstanding public recognition of the accomplishments of both Mr Rosillo and Bell & Ross.

The ceremony was held in the Grand Salon of the Musee de l’Armee, and was conducted by General Christian Baptiste, director of the museum. 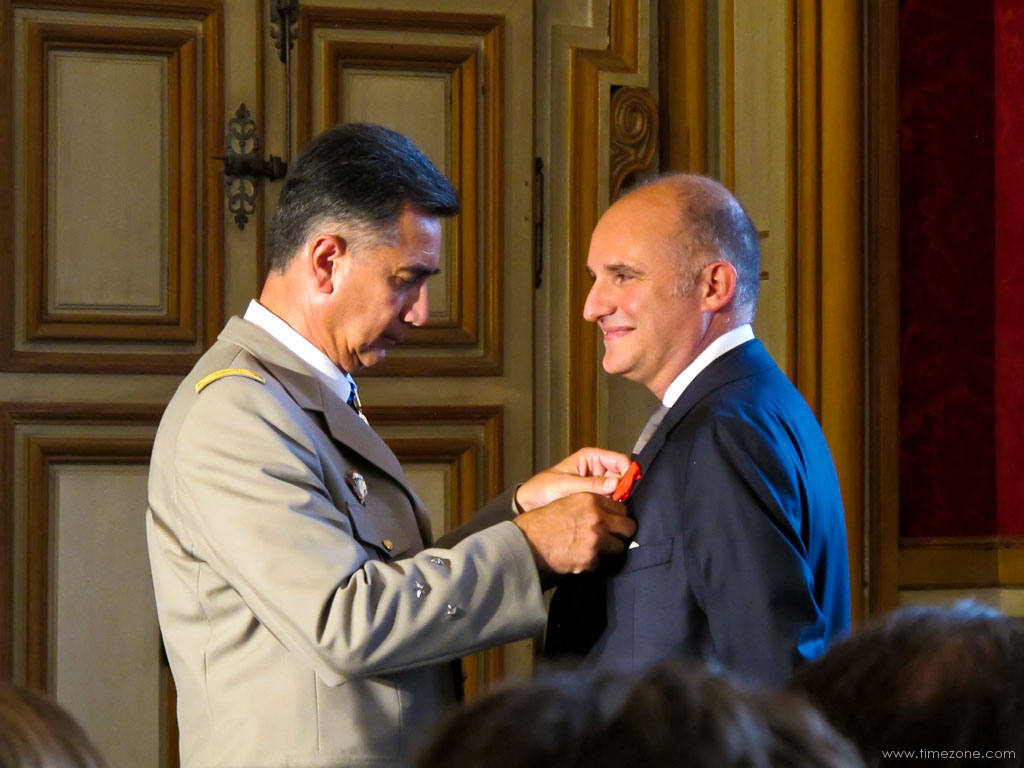 After a short introduction outlining the accomplishments of Mr. Rosillo and Bell & Ross, Gen. Baptiste presented the Legion of Honor. In his acceptance speech, Mr Rosillo humbly accepted the award, and recognized all of the people in his life that have helped along the way. First, he thanked his co-founder Bruno Belamich, who he recognized was equally responsible for the success of the brand. Next he honored their mentor Helmut Sinn. Even though he is in his 90s, Herr Sinn made the trip from Germany especially to attend this ceremony. 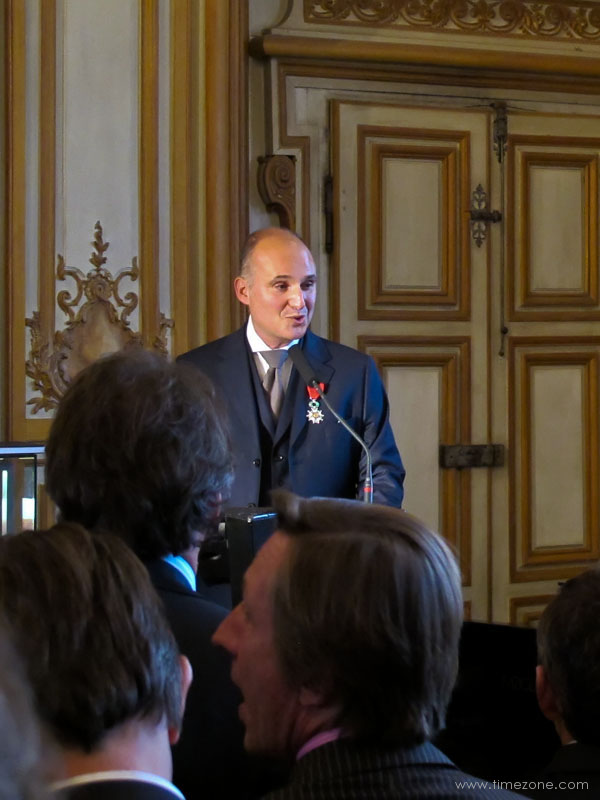 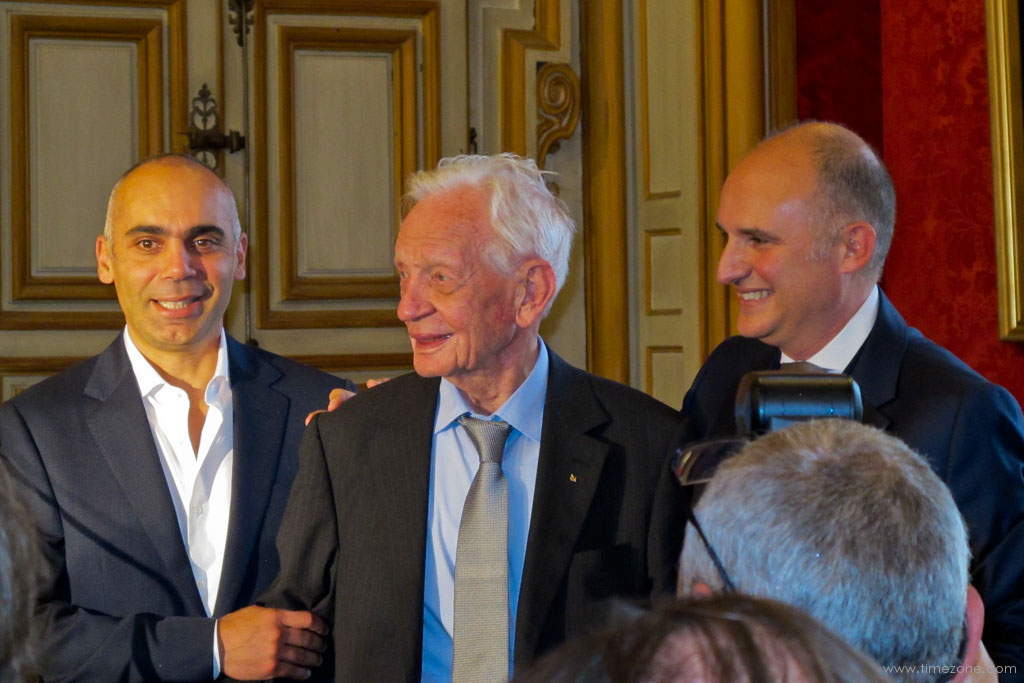 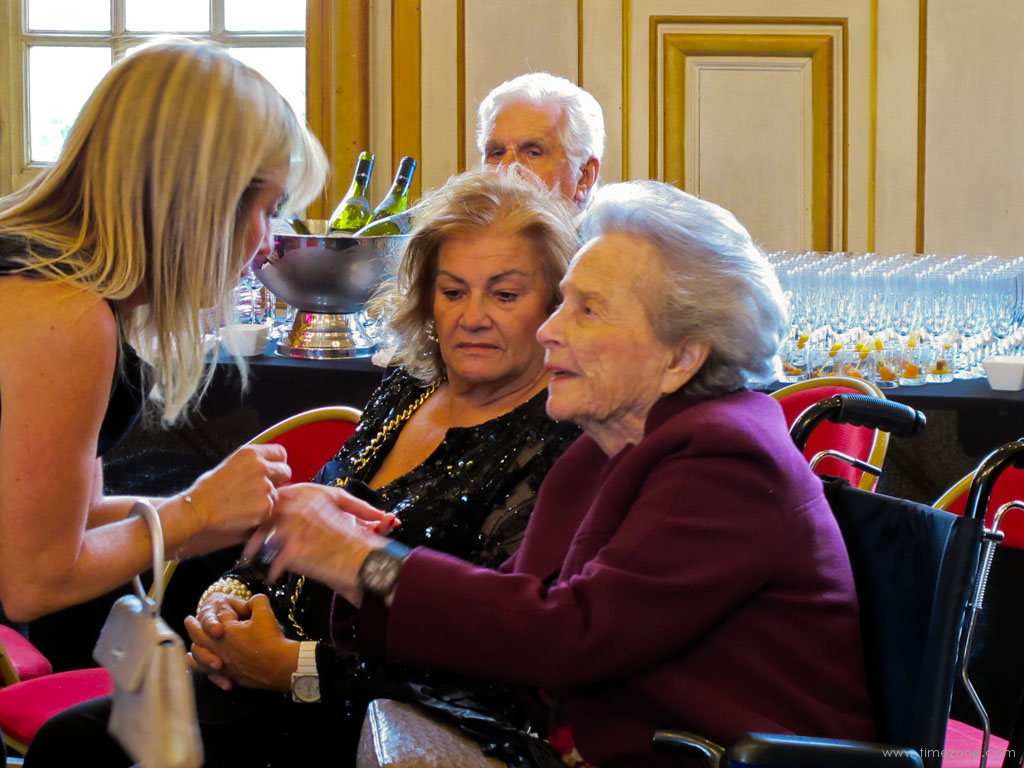 Next, he thanked the investors in the company, including Madame Eliane Heilbronn of the House of Chanel. Mde Heilbronn, now in her 80s, was educated in France and the US, and is the mother of Alain and Gerard Wertheimer (current co-owners of Chanel), and is also an attorney representing the company.

He then applauded the hard work of the employees of the company, and ended by recognizing his deceased parents, his wife, two young children, and extended family.

Following the ceremony, there was a celebratory reception with gourmet food, fine wine, and cigars, as well as a presentation of the 2012 Vintage collection. 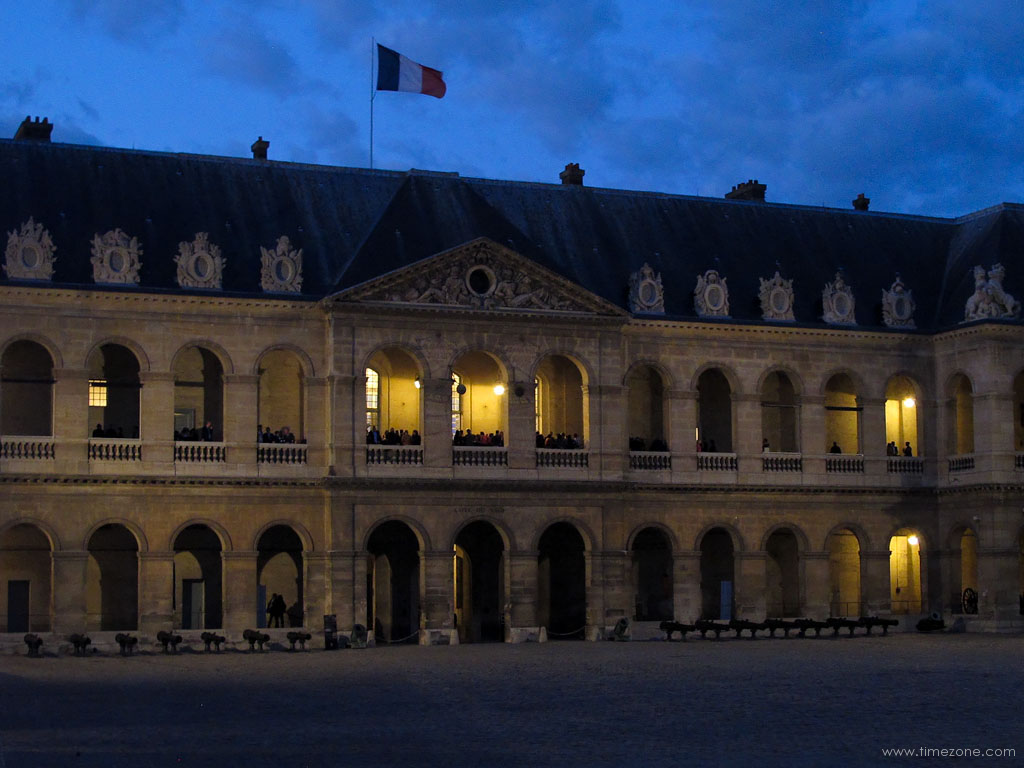 And with that, my journey to Paris came to a close.