An Evening with Martin Braun of Antoine Martin by JESSICA

In 2009, master watchmaker Martin Braun left the Franck Muller Group. Driven by a passion to build his own movements, Martin partnered with Swiss businessman Antoine Meier to realize the next chapter of his watchmaking journey. Together, the two founded the independent watch manufacturing company ‘Antoine Martin’ in Alpnach, Switzerland. 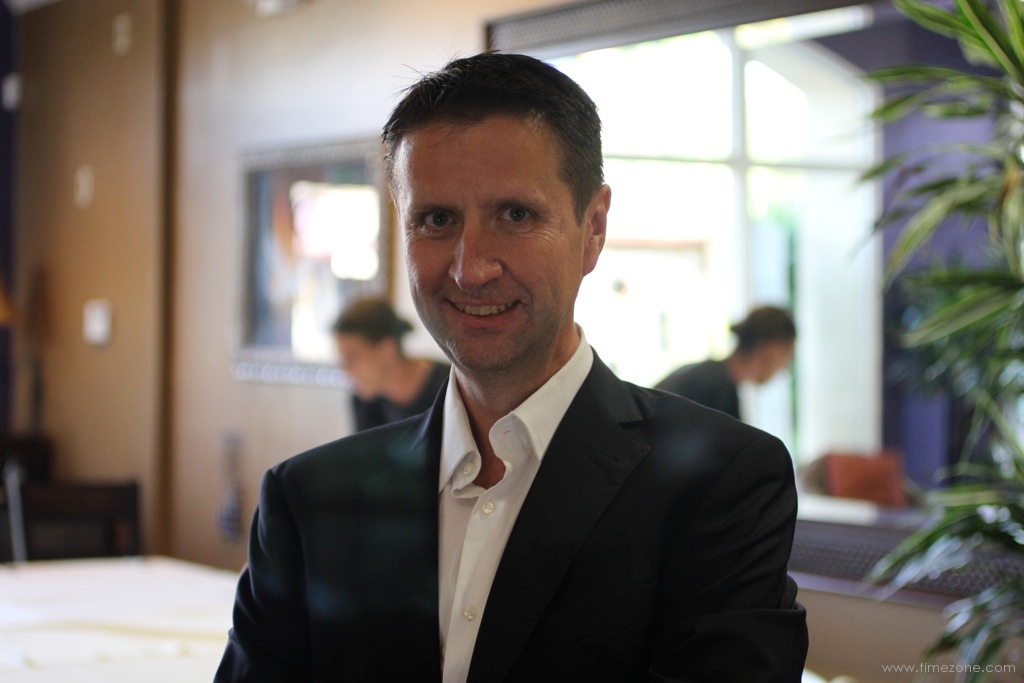 At Basel 2011, Antoine Martin launched its Perpetual Calendar with Large Balance (Quantième Perpétuel Au Grand Balancier) that houses the innovative in-house Calibre 39. The Calibre 39 is the expression of Martin’s entire watchmaking life and is nothing short of remarkable. The reliable and accurate movement has two patented technologies, a long list of technical details and is built to the absolute highest level of watchmaking. The movement is housed in a contemporary design that includes a guilloché dial from Cadran’or (Courtedoux) and a sculpted 85-part case each made individually by an artisan (Le Sentier).

This year, Antoine Martin introduces its masterpiece Tourbillon Perpetual Calendar (Tourbillon Quantième Perpétuel) which is nominated for the complicated watches category of the Grand Prix d’Horlogerie de Genève 2012. The Tourbillon Perpetual Calendar builds on the Calibre 39, and adds a flying tourbillon that revolves on its axis once every minute. The hour display is found in a subdial with engraved Roman Numerals and the minutes are shown by the large central hand and Arabic numerals printed on the flange. The retrograde date is found in a subdial at 3 o’clock. The perpetual calendar’s day and month windows and leap year indication are at 12 o’clock. 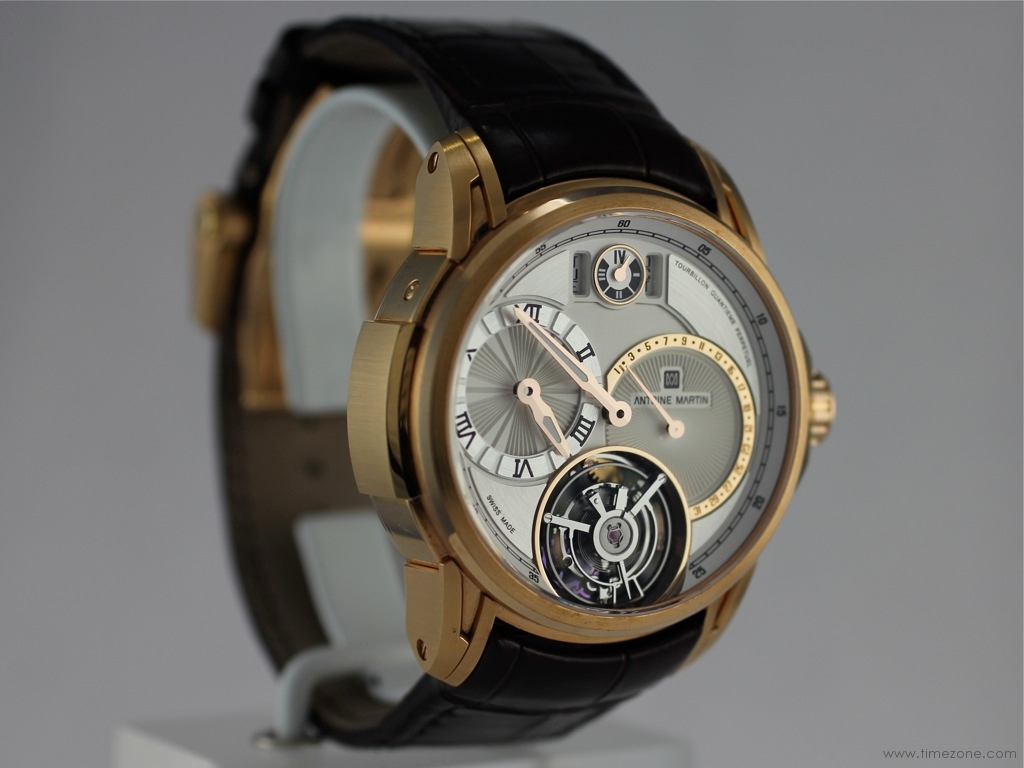 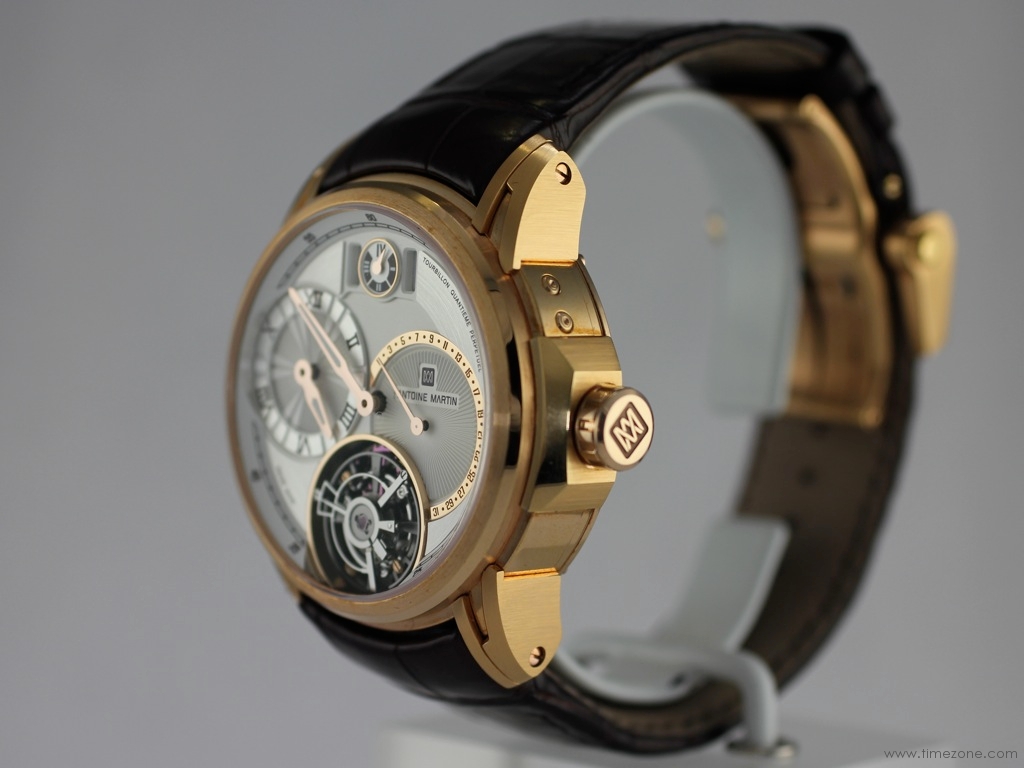 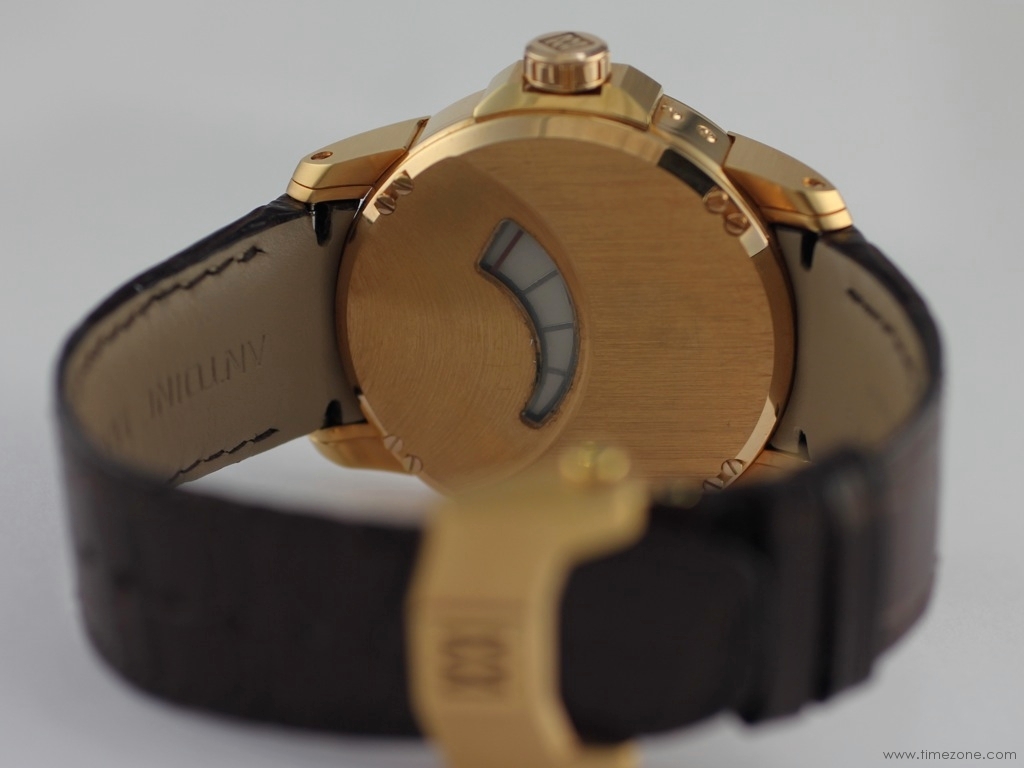 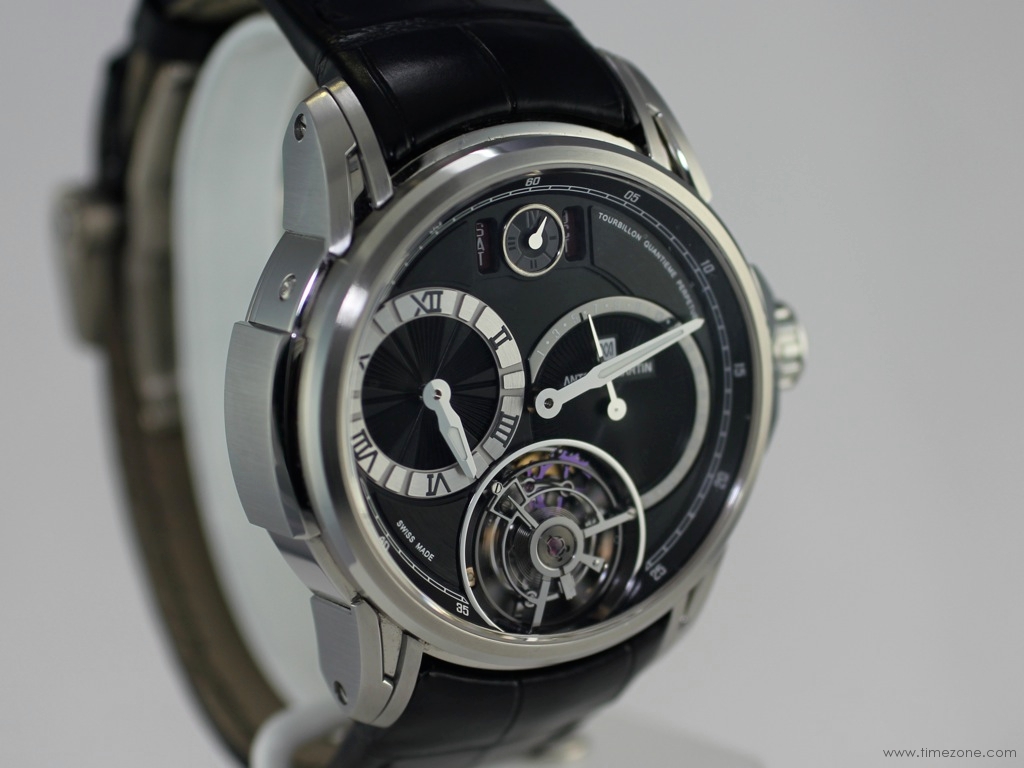 The case measures 46mm in diameter and 16.40mm thick 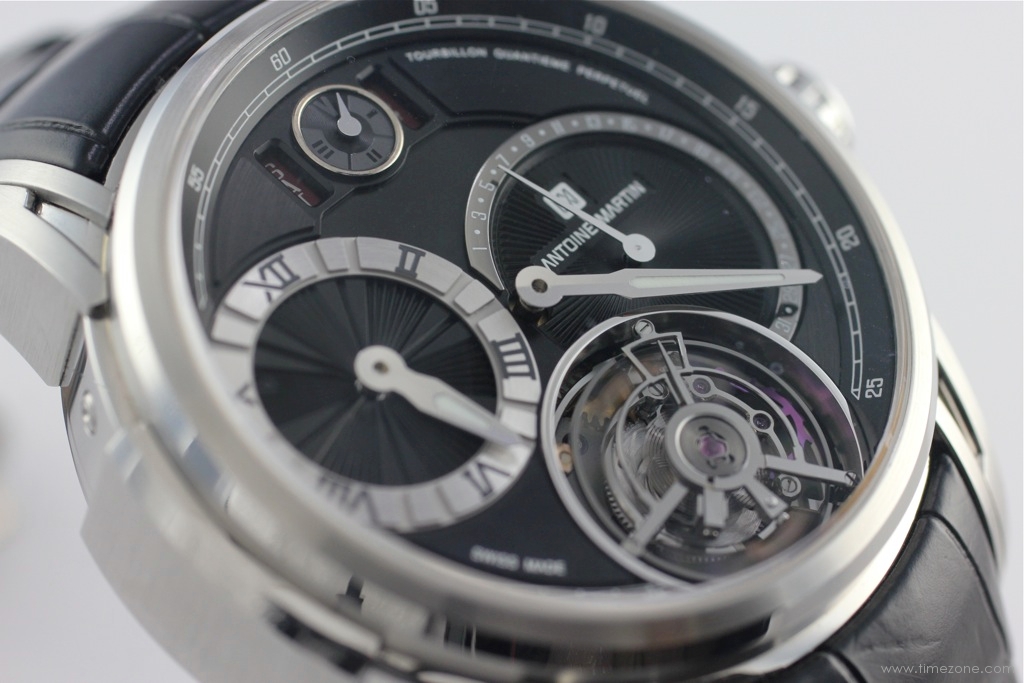 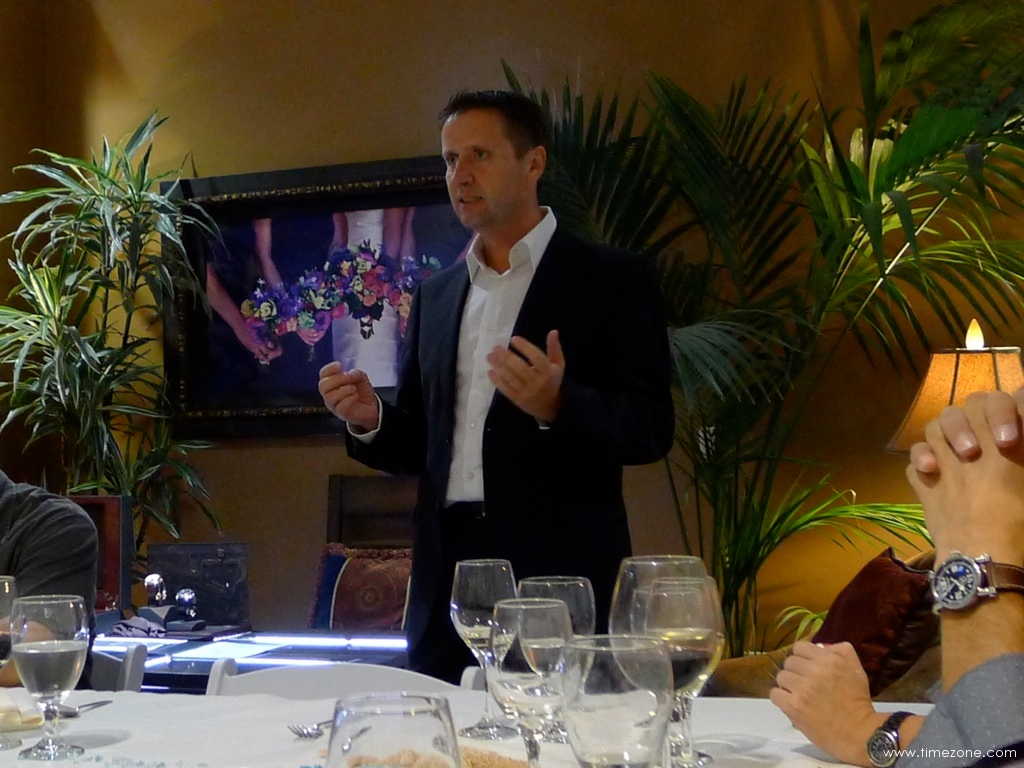 Martin explains the advanced materials and innovations behind his Calibre 39 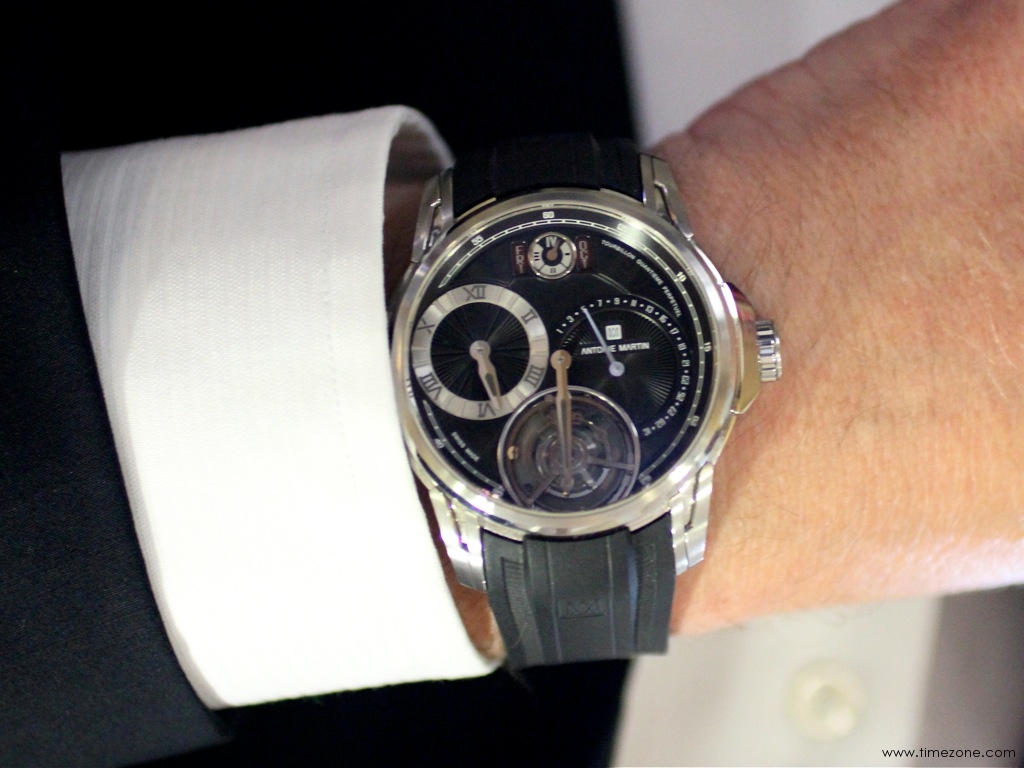 Perpetual Calendar with Large Balance (Quantième Perpétuel Au Grand Balancier)
Martin’s inspiration for his debut timepiece was the traditional movements made a century ago by such venerated watchmakers as Patek Philippe and Lange & Söhne. These movements all had a large balance wheel, quality components, perfect finish and a slow, leisurely beat. Since the balance wheel is the heart and soul of a movement, Martin decided to design a movement with the largest balance wheel possible that would beat at a leisurely 18,000 beats per hour. The result was an extra-large Grade 5 titanium balance wheel that is 17.5mm in diameter; making the Calibre 39 balance wheel the largest in the industry.

The elaborate dial has numerous layers of depth. leap year indication is at 12 o’clock. The perpetual calendar’s day and month windows are at 10 o’clock and 2 o’clock, respectively. A big date is at 6 o’clock. 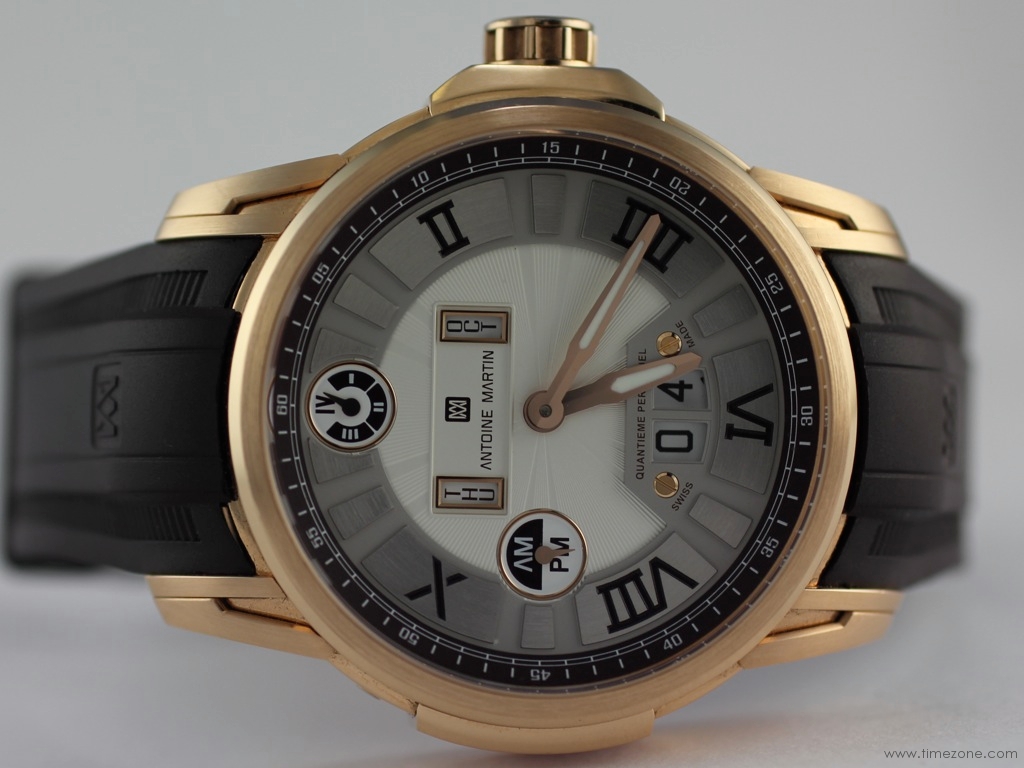 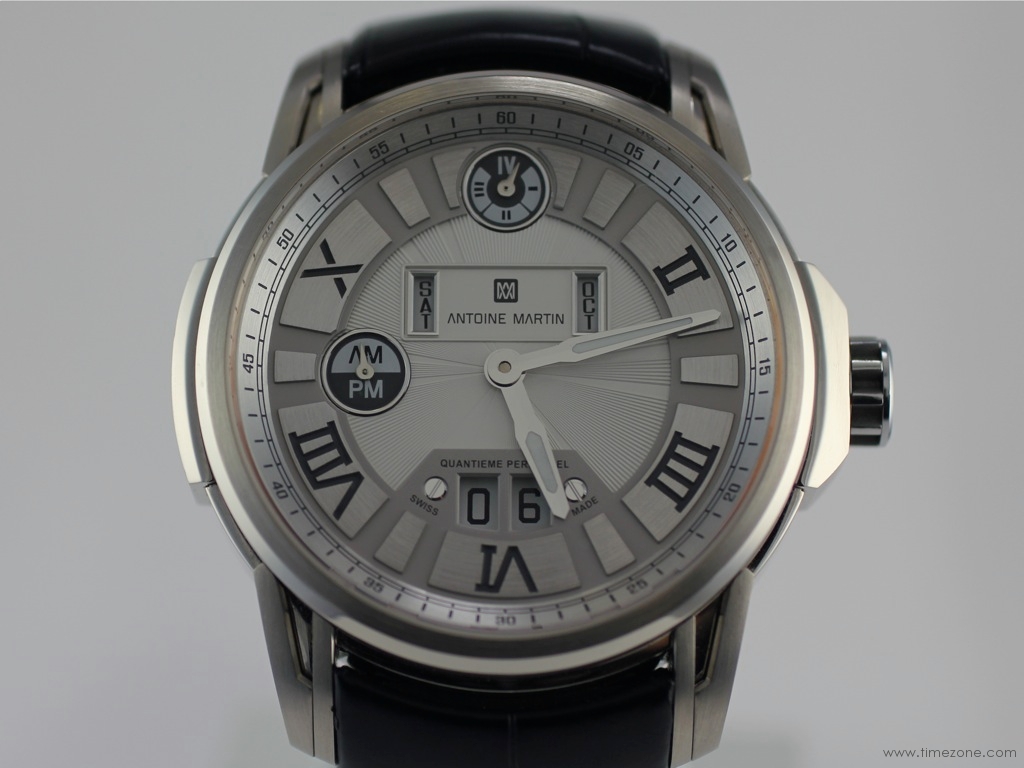 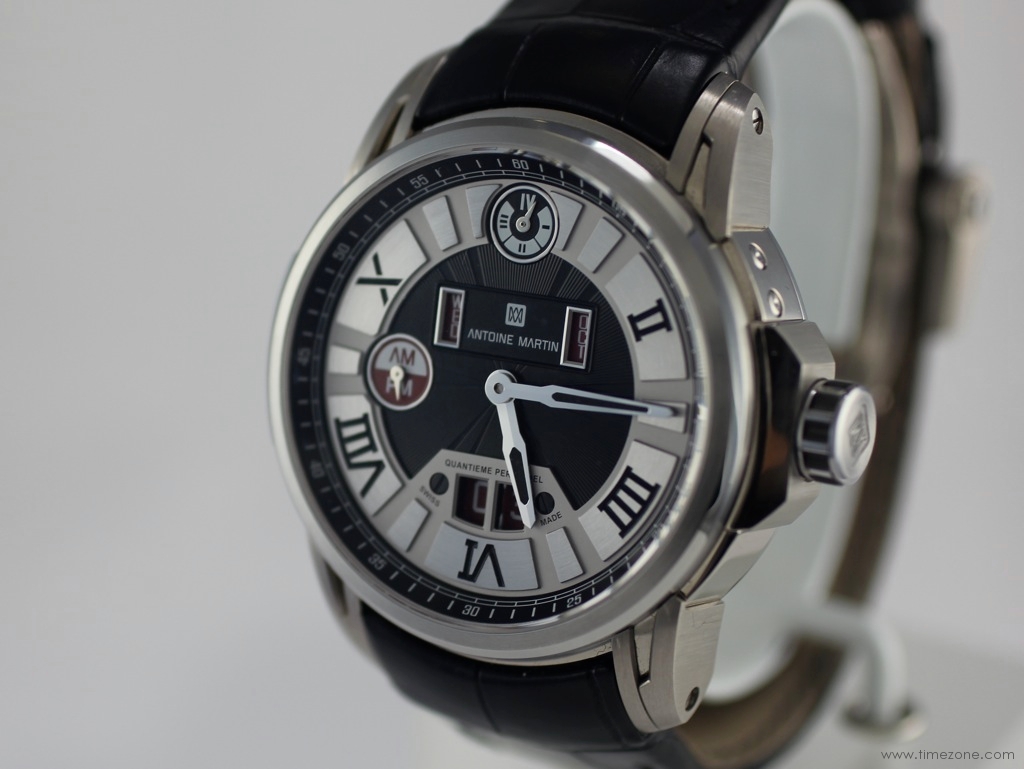 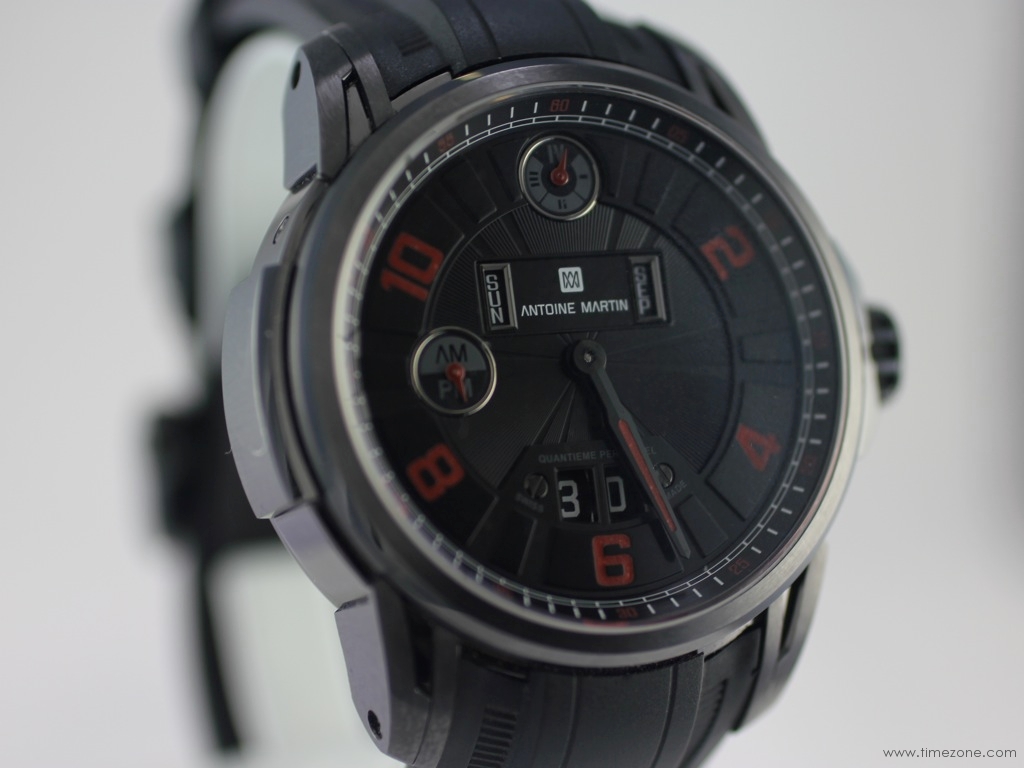 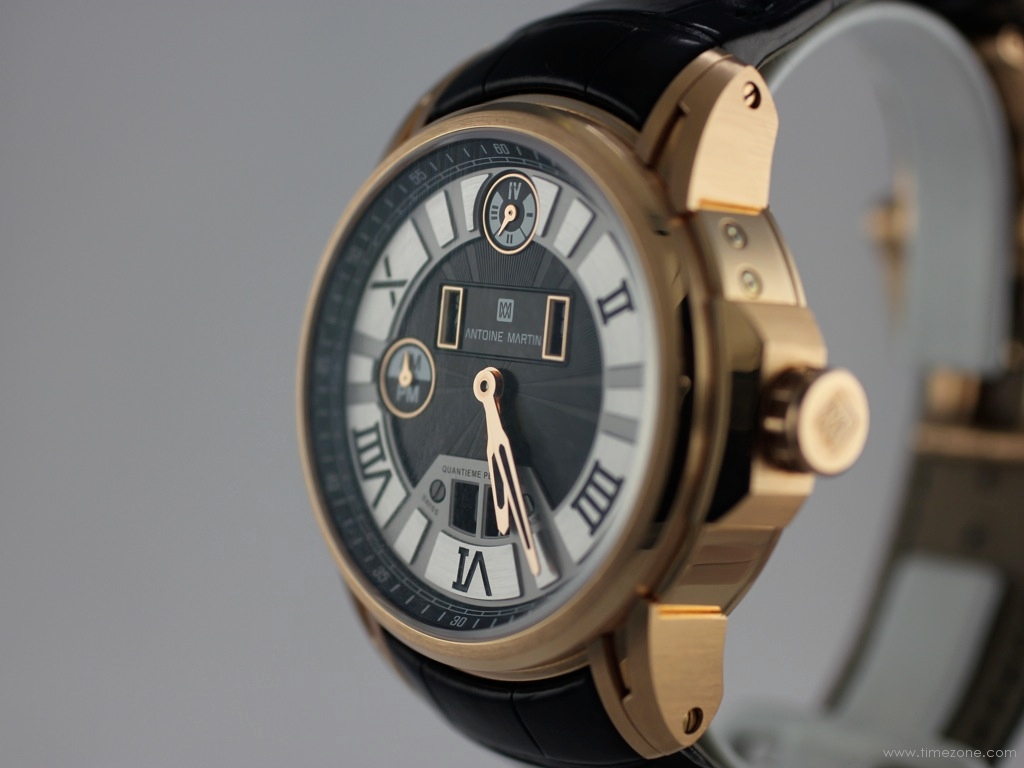 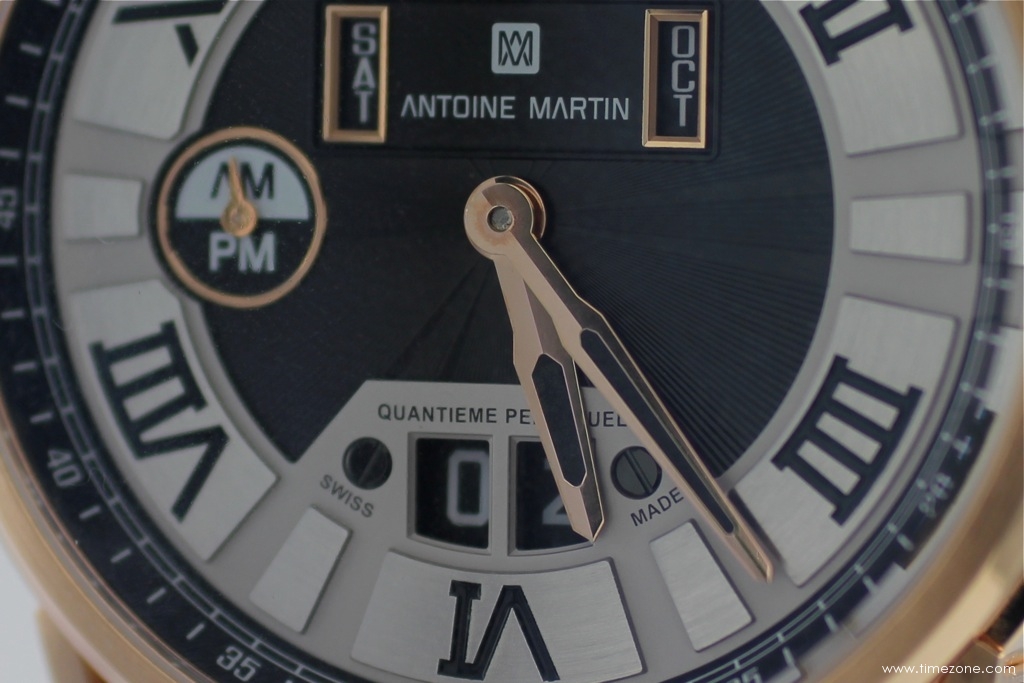 The elaborate dial has numerous layers of depth

The HPE Escapement, ADAS Mechanism and Modified Teeth
By utilizing a circular silicon escape wheel and silicon pallet lever, Martin improved the traditional Swiss lever escapement. Calling it the “High Performance Escapement” (HPE), the HPE recalculates the angles of the impulse planes of the escape wheel and reconfigures the pallets. In addition, the HPE optimizes the shape of the silicon impulse pin. According to Martin, “The result of these modifications is an increase in amplitude from 300° to almost 330° in direct parallel comparison to the conventional escapement design.” In other words, the HPE is extremely efficient. 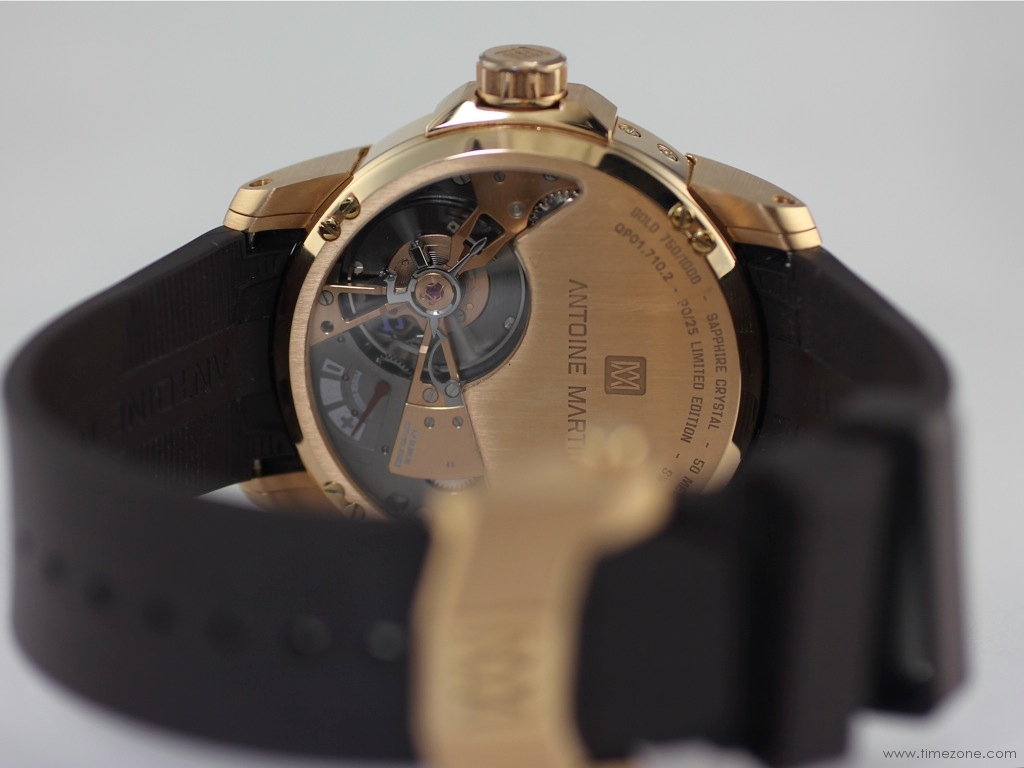 The Calibre 39 is conceived, designed and assembled in-house and finished to the highest level

Next, Martin applied his knowledge of physics to design a mechanism called, “Aerodynamic Amplitude Stabilization” (ADAS) to ensure that the movement remains as accurate as possible. This mechanism comprises of a control cam guided by the power reserve display. When the movement is fully wound, the cam moves to within 0.01 mm of the balance wheel, whose four arms form aerodynamic drag. As the watch runs down and the mainspring unwinds, the effect diminishes any fluctuations, stabilizing the balance amplitude. Amplitude stabilization is important for keeping an even rate and the Calibre 39 maintains more or less the same amplitude for four days. 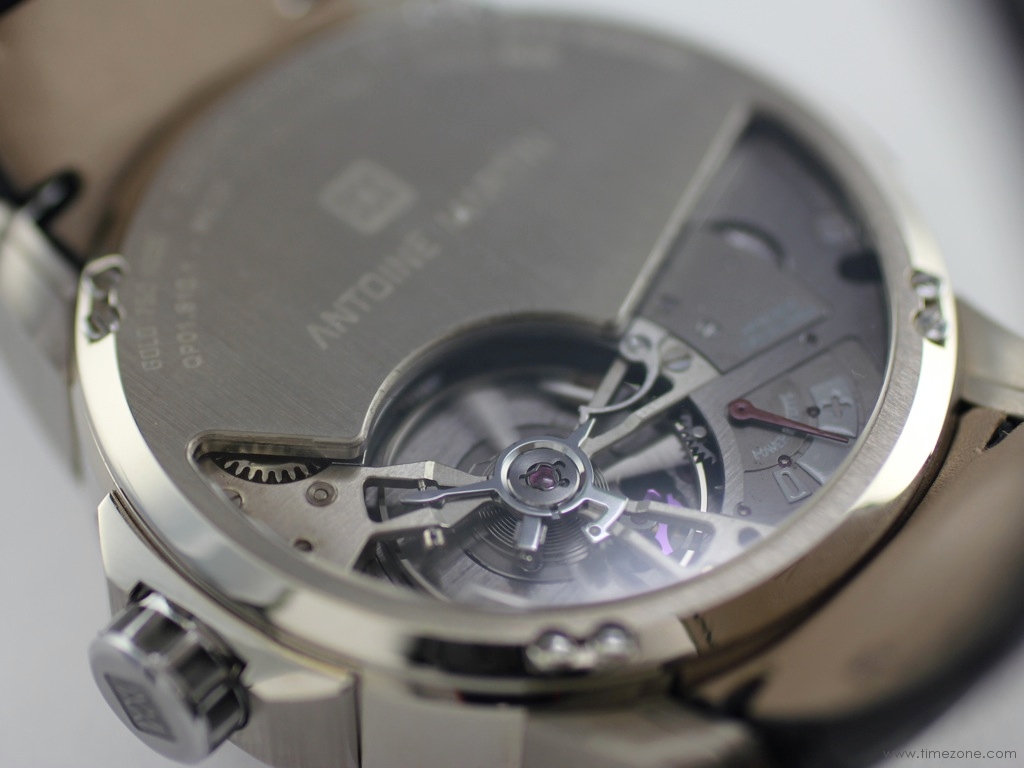 Finally, Martin modified the shape of the escape wheel teeth, which increases torque transmissions by 5%.

The sum total of these innovations with a large, free sprung balance wheel is a reliable, accurate and efficient movement with a 15% increase in energy yield; or a huge 6-day power reserve. In addition, the Calibre 39 is remarkably precise as a result of a micro-adjustment system that can adjust the “lost wave” nearly down to zero. The running results for the Calibre 39 is 1.5 to 2 seconds per day. 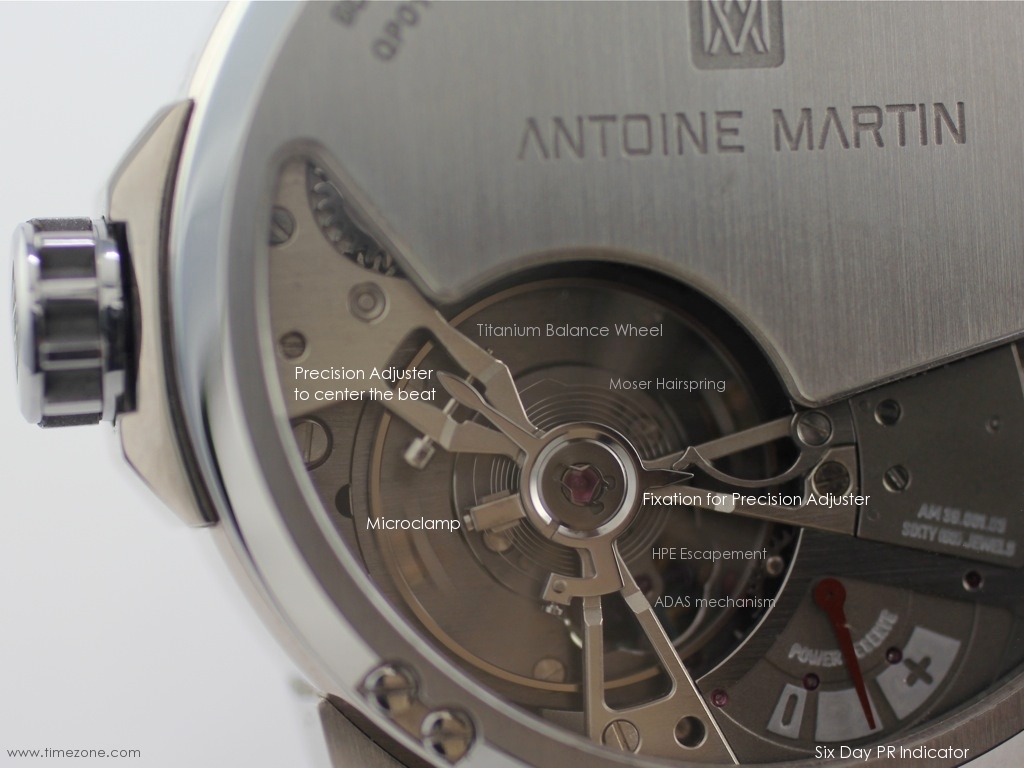 Conclusion
Due to the exclusivity of the Calibre 39, Antoine Martin is handcrafted in low quantities of a few dozen with most purchases by collectors in Oman and Russia. However, in the near future, Antoine Martin will launch an automatic movement with a new and patented winding system, as well as a chronograph that are more affordable. At such time, production may grow to as much as 5,000 watches per year. In addition, Martin Braun anticipates that he will respond to the demand of his loyal following and produce astronomical complications. 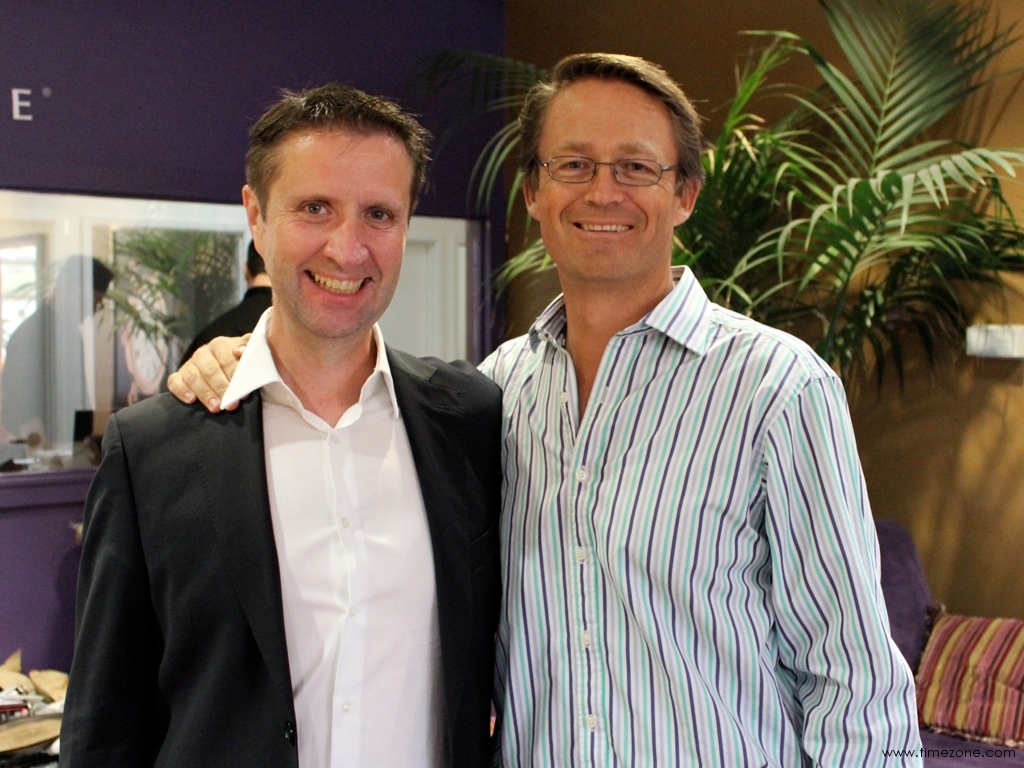 Martin and Tim
About author