On Press Day at Baselworld, Rolex have got used to us Internet guys trying to circumvent the official launch times and posting pics of watches in the windows of their stand. They have instituted a three-pronged approach. First, although the watch holders are mounted with watches and placed in their respective vitrines, they are fitted with cloth covers to protect the watches from view. 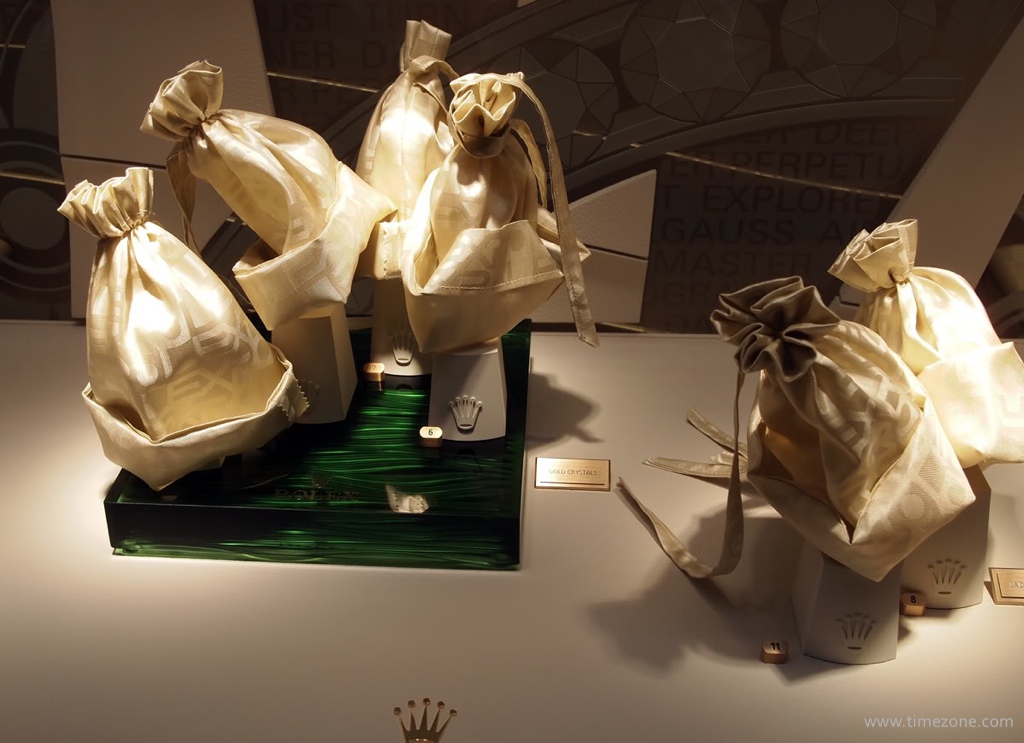 Second, a higher barrier shields the entire front of the stand from passing onlookers as a Rolex representative stands in front of a window display to direct the placement of the individual watches. 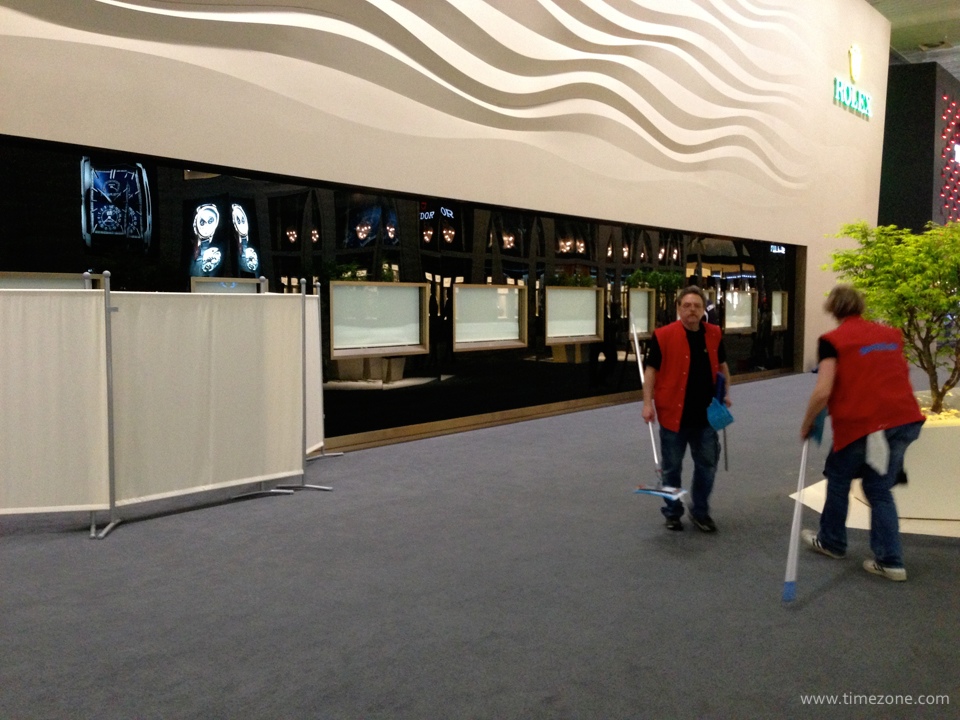 Finally, as each window display is completed, the barrier is moved on to the next one and a roller blind comes down behind each window, thus securing it from prying eyes. 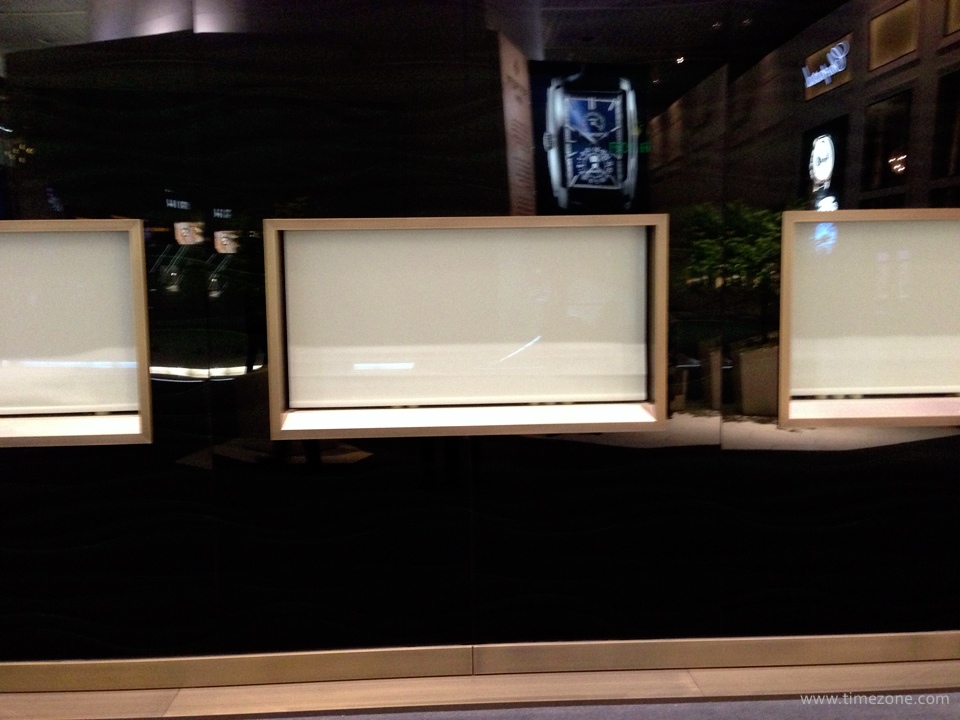 However, no-one mentioned any of this to Tudor, who (despite appearances) actually share the footprint of the Rolex stand. Even before the official launch time, their windows were all arranged, nicely lit and with their new watches proudly displayed on their respective holders. 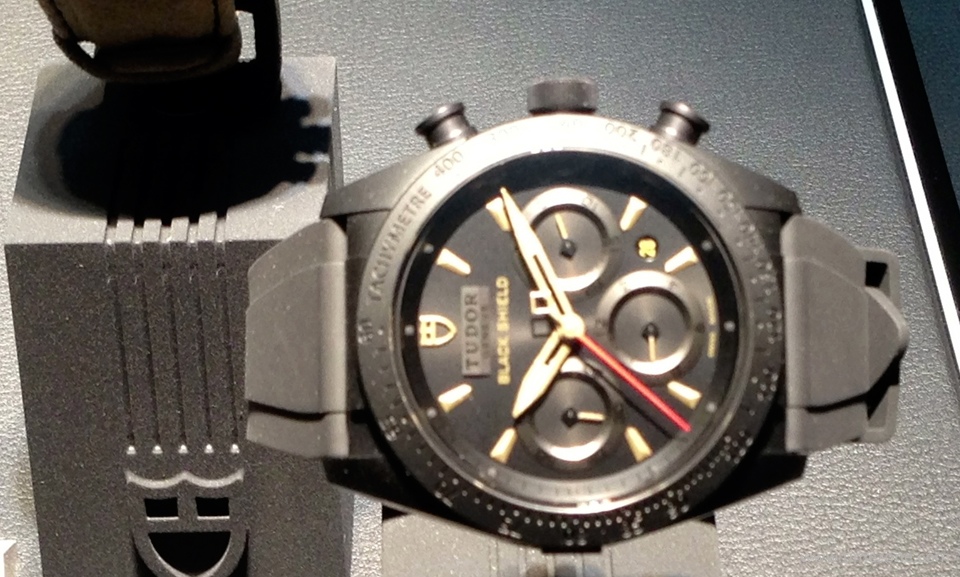 As I was quickly taking photographs of the windows, a couple of Tudor representatives exited the Tudor stand. Recognizing both, we greeted each other and I congratulated them on the Black Shield I had just photographed as shown, above. But one of them just smiled, lifted his arm and pulled back his sleeve to show this: 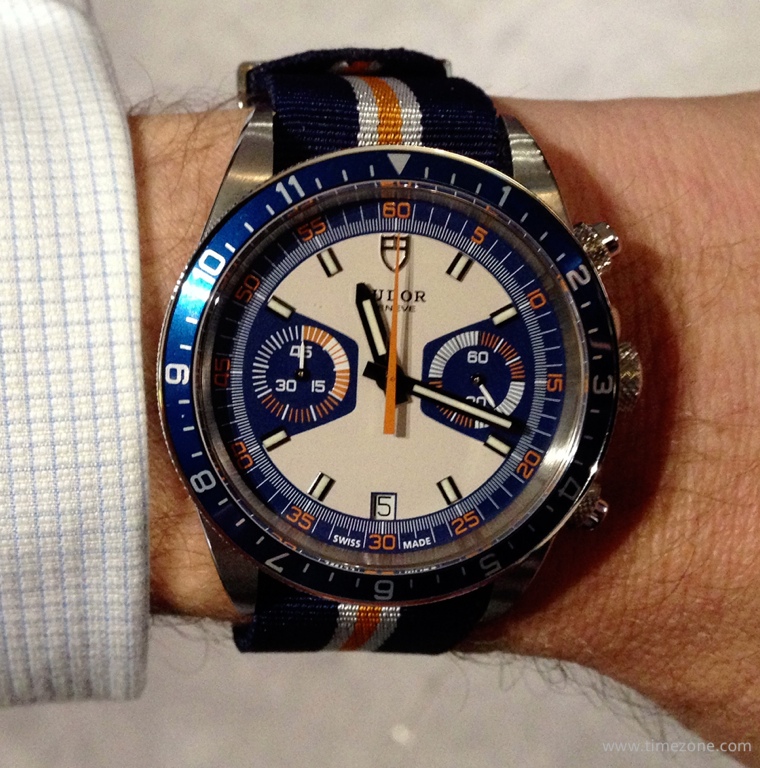 The Heritage Blue is stunning, and, like the original Heritage chronograph, a great homage to the original piece but with just a few ‘twists’ which serve to bring it up to date. I like the fact that they have chosen it as the model to ‘honour’ this year, the ‘Home Plate’ was the very first of the exotic dialed Valjoux 23 chronographs from Tudor and the blue dial version was the very last; so they kind of bracket an era.

Here are some points I took away from my meetings with Tudor:

1. The watch will be available from June onwards

2. US Tudor sales begin in September of this year at a few stores and will roll out nationwide from then.

3. The fabric strap is NOT a NATO strap, it is of a unique design; so far only used by Tudor; they suggest that the changing of straps is done by a dealer, due to the fact that there are no spring bar holes in the case. The reason for the unusual strap construction is that they do not want the watch moving around on your wrist, which can happen with the classic NATO band. These straps are made on century old weaving machines, which are the few ones left.

4. Interestingly, at a time when Rolex are going over to right angle corners on their lugs, Tudor will be sticking with the classic polished bevel on the corner. You can see them perfectly on the image below. 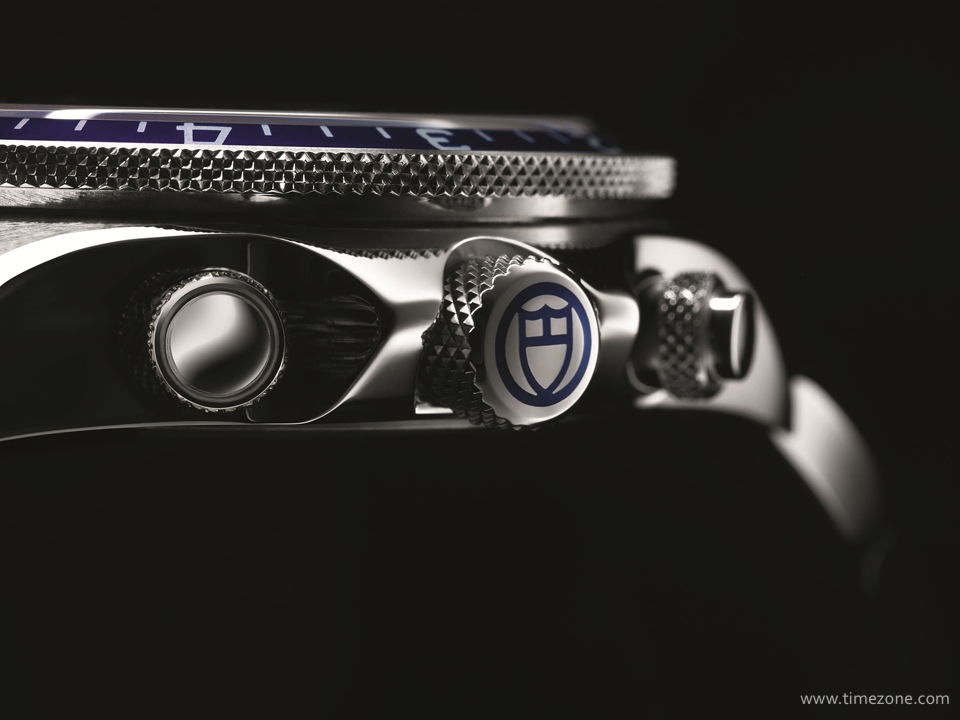 5. The case is not identical to the original Heritage chronograph; as you can see in the image, above, the tips of the pushers are different to the black enamel tips on that watch, as seen below. 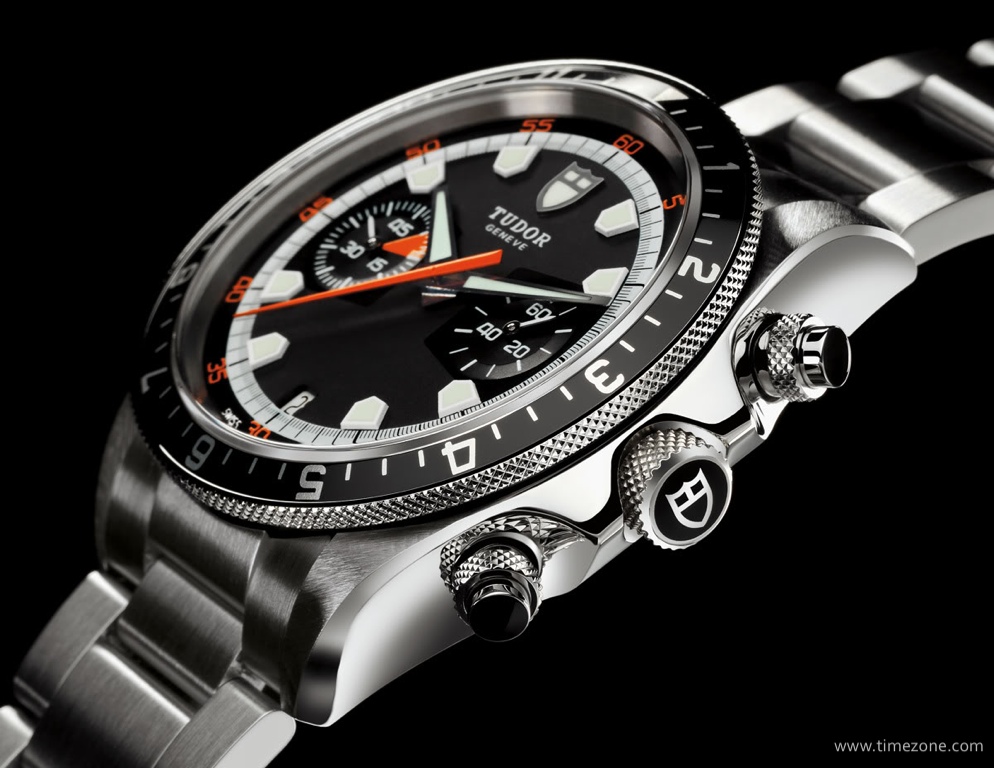 6. The movement is the ETA 2892 with a DD 2054 module; this was chosen over the much cheaper solutions because Tudor wanted to retain the classic 45 minute counter of the original, the setup used is similar to that used in several AP Royal Oak Offshore models, which are at a rather higher price point.

8. There will be no cyclops on this watch or on any subsequent Tudor models; as they moved away from being Rolex ‘clones’.

9. The watch is assembled in Geneva by Tudor employees and the construction standards and QC are exactly the same as Rolex.

10. The indices are different from the original, where they were printed onto the dial; here they are applied metal indices which are then filled with Luminova and even the Tudor shield at 12 is luminous. 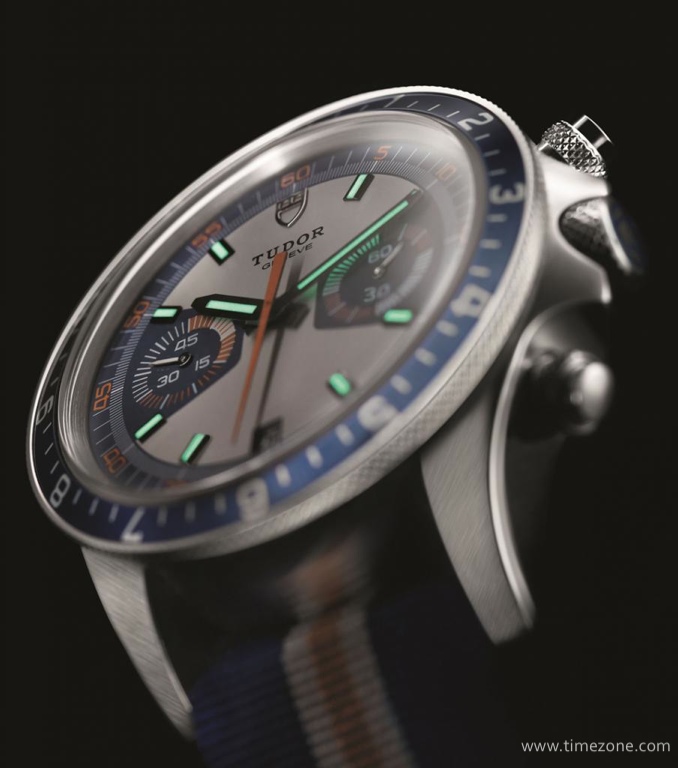 11. Tudor do not plan to restrict production of this watch, if you want one and live in a country where it is sold, then you should be able to get one.

At Basel, I ordered only one watch, the Seiko GS44 replica I talked about earlier; however, whilst writing this piece and particularly whilst looking at the images of the watch, I have reconsidered my decision and have now placed an order for one of these Tudors.