Moon phase complications have always held a special place in my heart and may very well be the reason I ever got into watches. From the grandfather clock in my parents’ living room to the Patek perpetual calendar on my grandfather’s wrist (a 3940 in case you’re wondering), moon phases were all around me as a kid and pretty much became synonymous with “grownup” watches and clocks. In fact, the first fancy watch I ever that wasn’t a Swatch or Flik Flak was a gold-plated quartz Gucci with a moon phase, which as a 7-year old I thought was on par with my grandfather’s watches. Ignorance truly is bliss.

Fast-forward two decade and I’m just as fascinated by the moon as I was then. It could be because I come from a place where the moon is far more than just a glowing chunk of space-rock in the sky; where our life revolves around the moon and not the sun. Our calendar and festivities are based on its shifting shape. In fact in Arabic you can even compliment someone’s beauty by calling him/her the moon. So while a moon phase indication might not be nearly as useful as say a date function, I can’t deny that it is the most poetic of all complications.

In the majority of moon phase watches I’ve come across, the complication is made to remain relatively discrete, occupying a minor part of the dial’s real estate. Perhaps this is how buyers like it, but I’ve always wanted to see a watch where the moon takes on a much more prominent role. Enter the Arnold & Son HM Perpetual Moon. 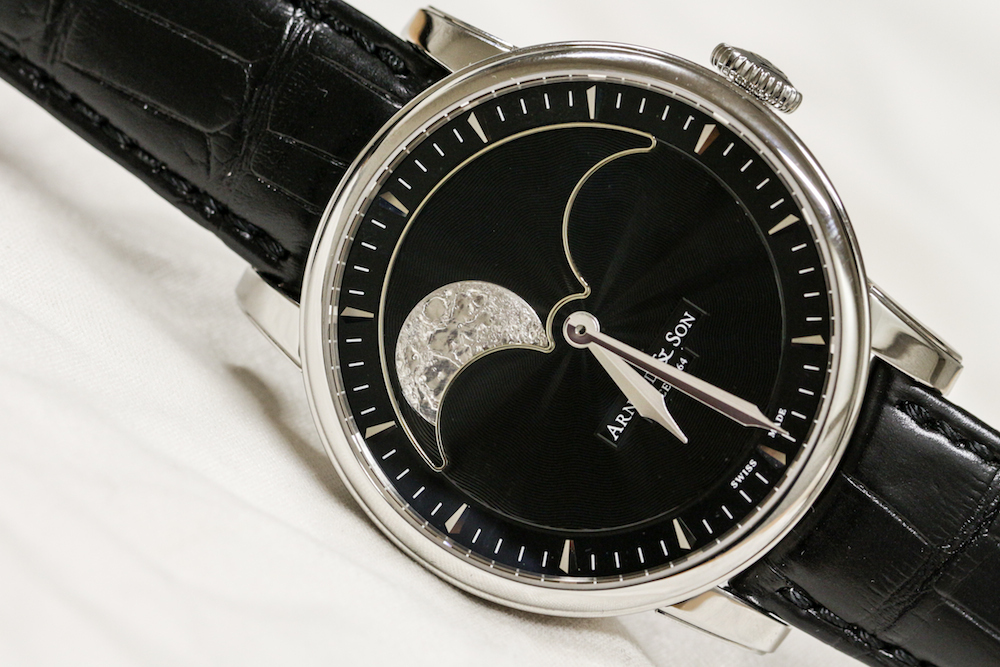 Now here’s a brand that knows just how to reinterpret classical designs and make them their own. When I first saw the Perpetual Moon during Baselworld 2013, it was one of the most pleasant surprises of the show. Keep in mind that Arnold & Son were also showing some higher-end pieces like their record-breaking UTTE ultra-thin tourbillon. But for me, the watch with the giant, sculpted moon stood above the rest. It was as if the designers in La Chaux-de-Fonds had read my mind and come up with the moon phase I’ve always wanted but never pictured. 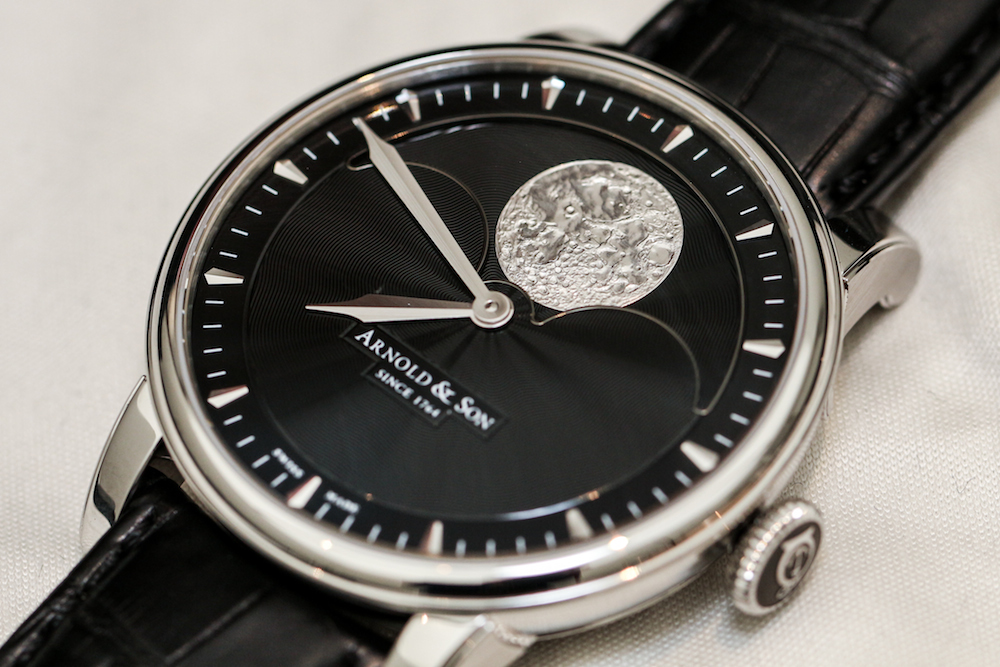 The HM Perpetual Moon comes in three different versions: a stainless steel case with a black guilloche dial, a red gold case with a matte cream dial and a red gold case with a royal blue translucent enamel guilloché dial. Needless to say, this is one of the largest moons and moon phase disks you’ll ever see on a watch, with the disk measuring a whopping 29mm in diameter with a 11.2mm moon. You really can’t avoid it since it takes up almost half of the dial. What I especially like on the steel and blue enamel versions is how the moon phase disk seamlessly blends in with the rest of the dial. The faceted hands are polished on one side and satin-brushed on the other, making them easy to read under just about any lighting condition. 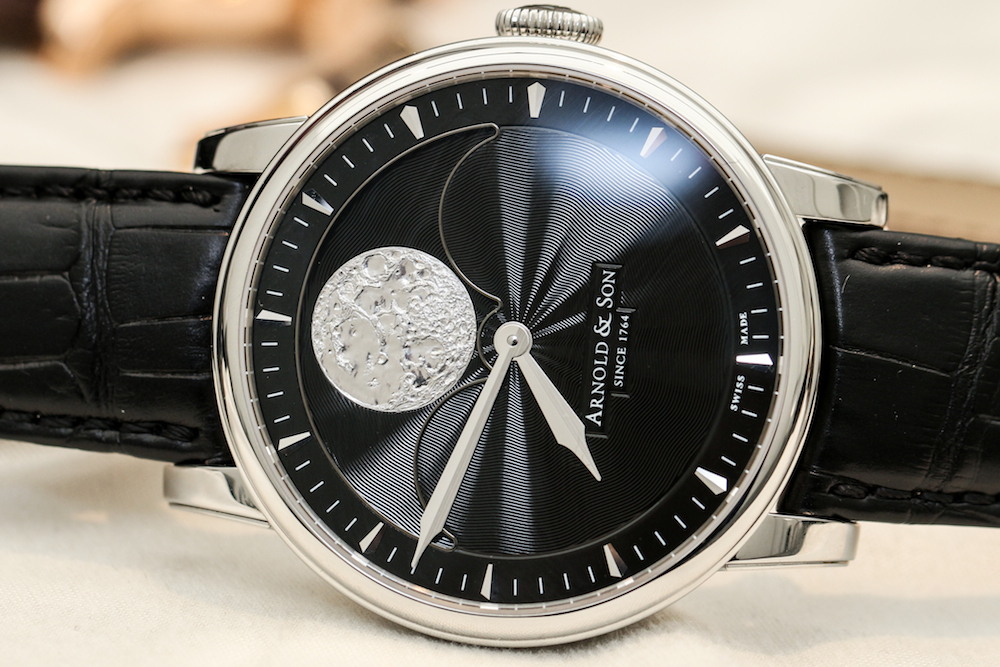 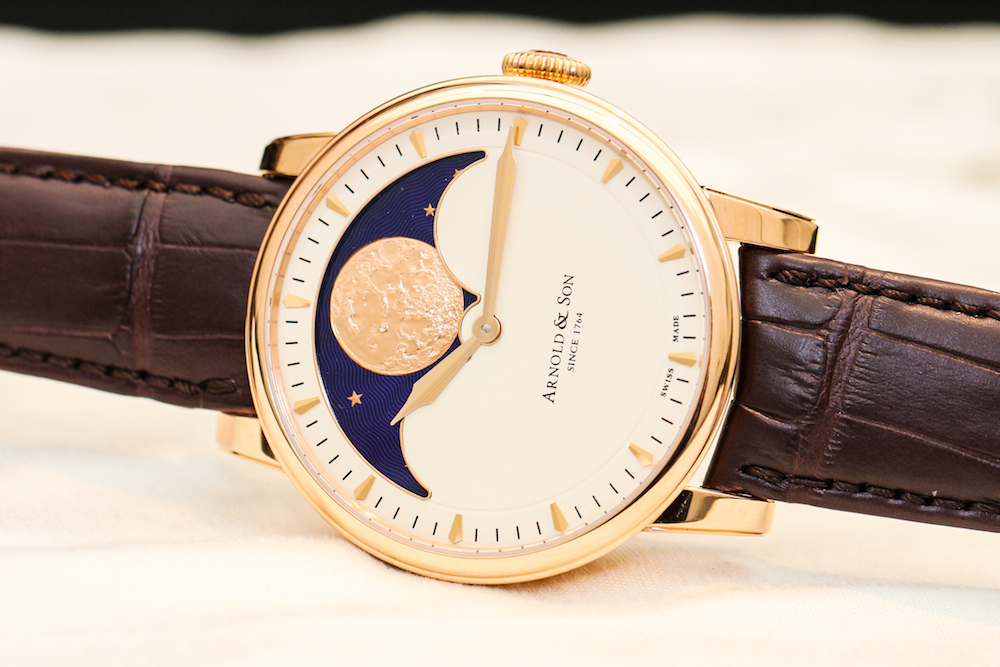 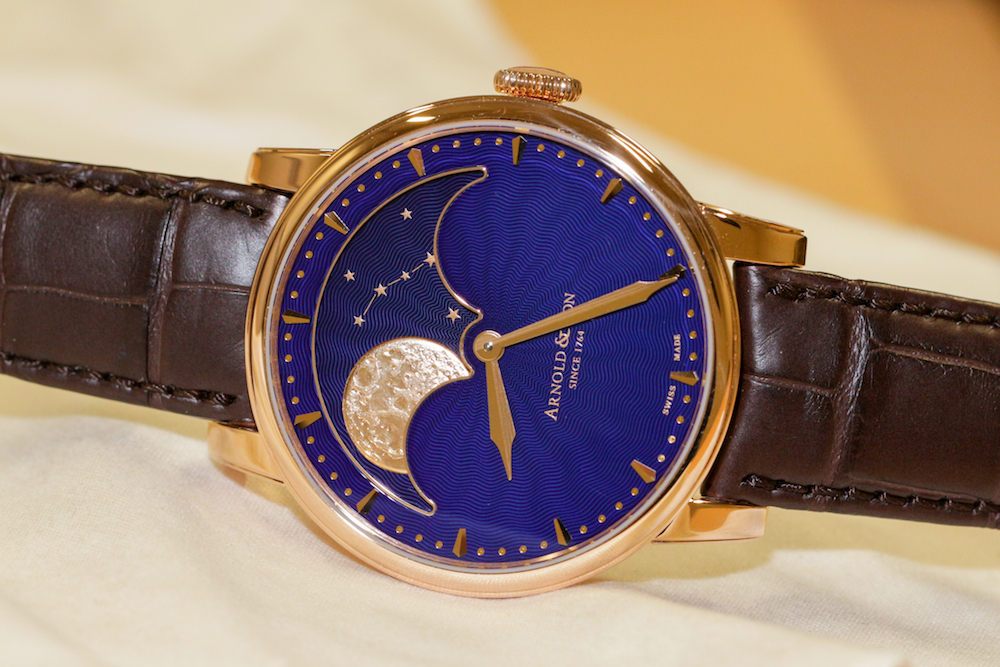 The moon is a sculpture in itself that deserves the center stage position on the watch. Not only is it photorealistic, it is also very three-dimensional, second only to spherical moon phase indications. It’s made from an initial hand-engraved model that is duplicated for the production series. 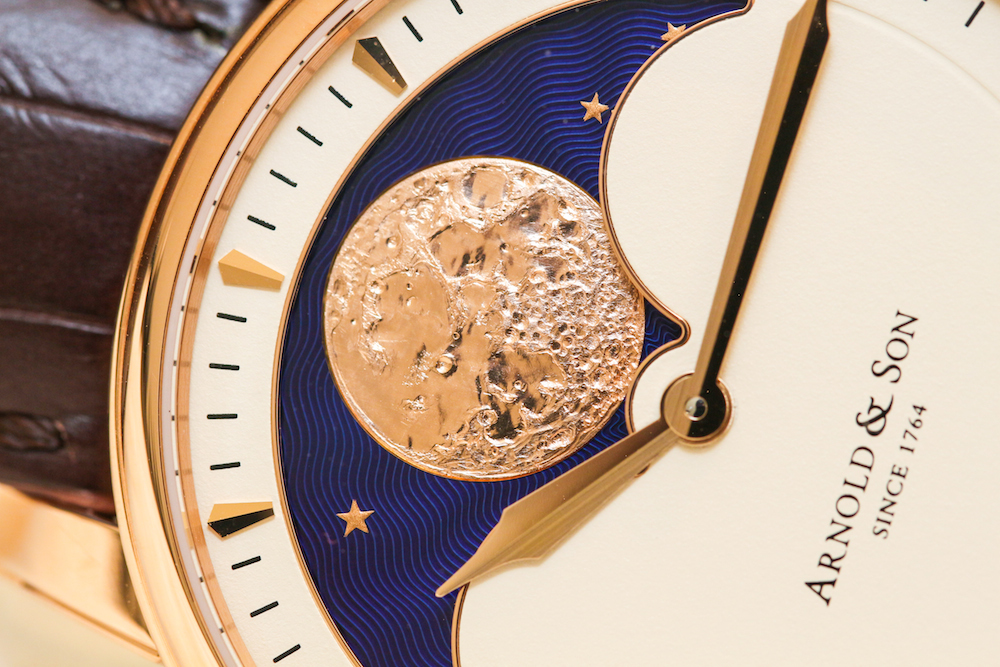 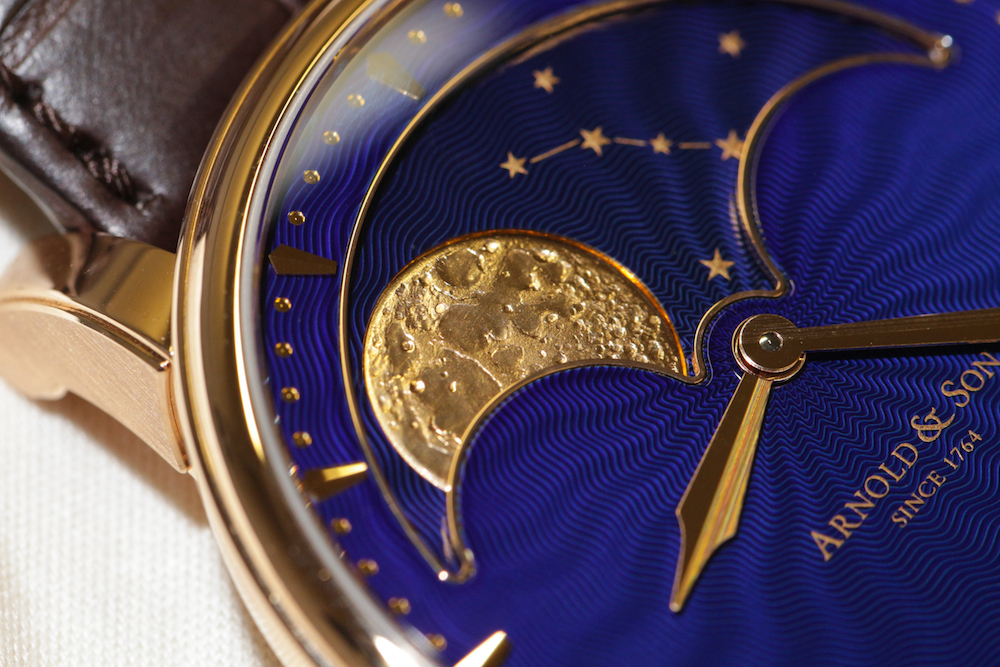 The 42mm case is one of Arnold & Son’s more reasonably sized ones, as befits a watch of this genre. I’m sure many of you probably find 42mm a tad large, but keep in mind that the case tapers down from the bezel to the case-back, making it wear more comfortably than say my 42mm IWC Portuguese. There’s a corrector for the moon-phase at 2 o’clock, but if you keep the watch running you probably won’t use it much as this is, as the name implies, a perpetual moon phase complication that is subject to only 1 day’s deviation every 122 years. 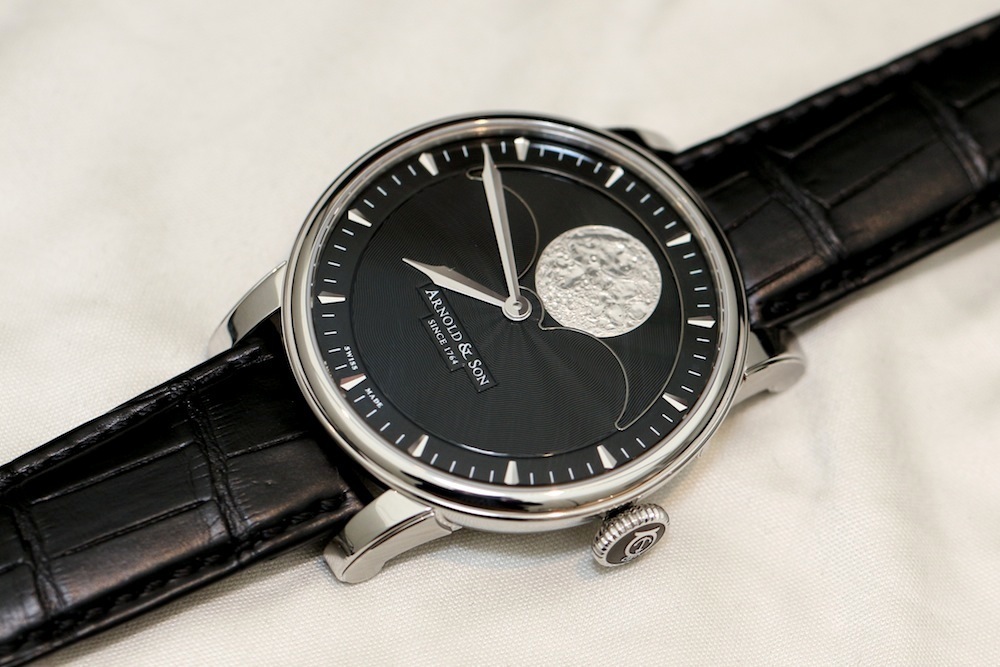 Unlike other moon phase watches where the complication is a modular add-on to the movement, the HM Perpetual Moon has an integrated moon phase movement, where it was designed and built from the ground up around the moon. The proof is the secondary moon phase indication on the top plate case-back side of the watch, which allows accurate setting of the moon even when it’s not visible on the dial. 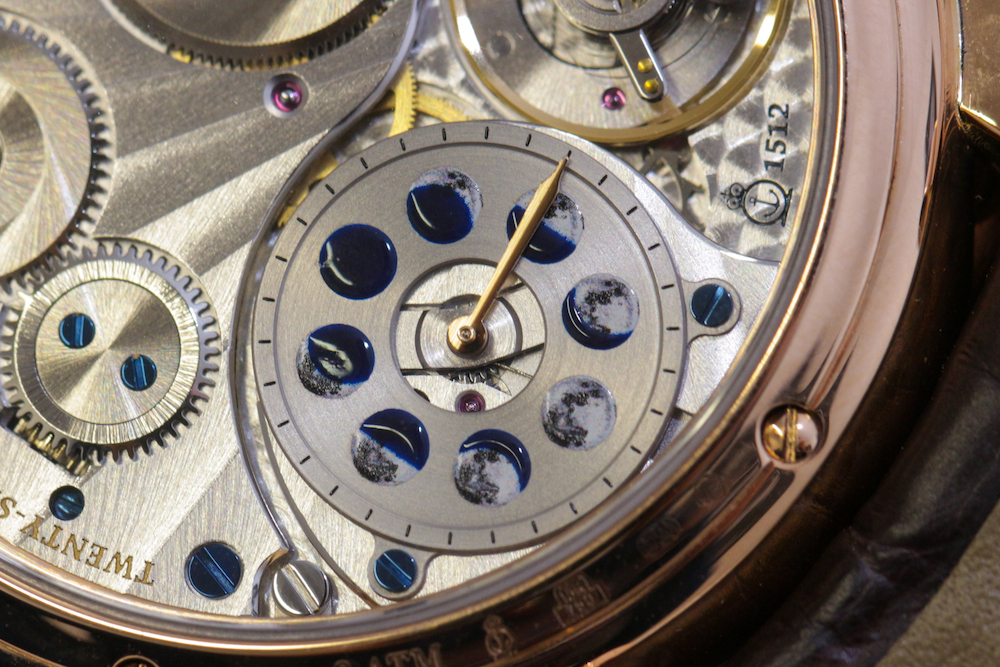 Like all other Arnold & Son manufacture movements, you can expect a high-level of hand finishing and decoration. The manually chamfered edges and polished edges are on par with the best of them. The screws are flame-blued, and the radial Côte-de-Genève stripes are softer and less “grainy” than on movements where they’re applied by machines. Leaving the Arnold & Son booth, I was somewhat disheartened by the less flattering industrial finish on my Jaeger LeCoultre Reverso Grande Sun Moon that I was wearing that day in Baselworld. 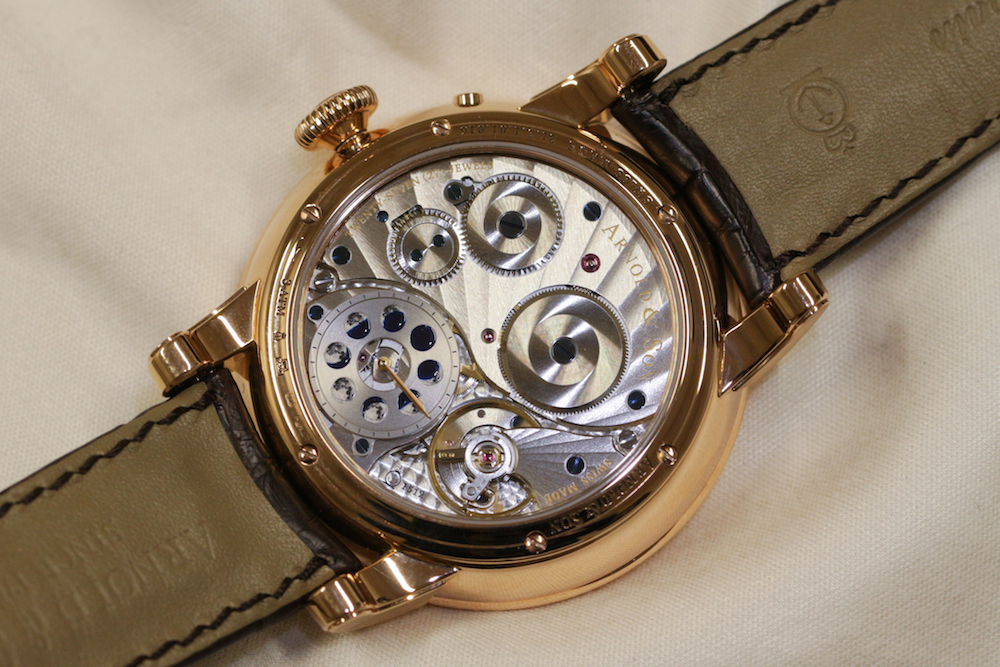 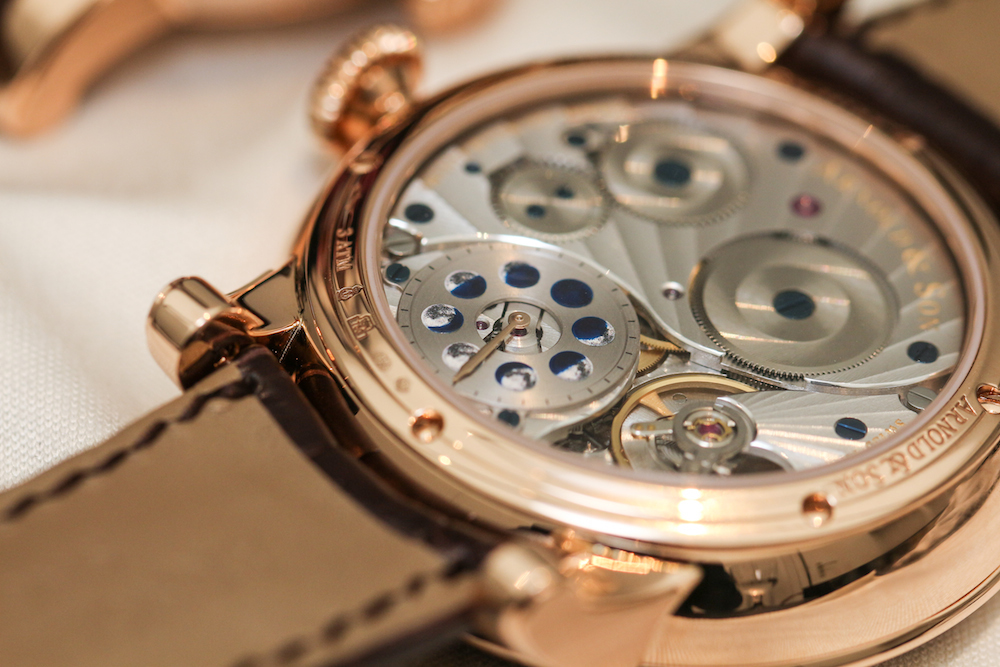 The great thing here is that whether you opt for the more affordable steel version or either of the ornate gold versions, you’re getting exactly the same level of overall finish. I admire Arnold & Son for almost always offering a non-gold white metal case option.

All in all I feel that this is a watch with enough classical elements to make it a piece appropriate for dressier occasions, while at the same time being so unique that I can totally see it becoming a part of my usual watch rotation. 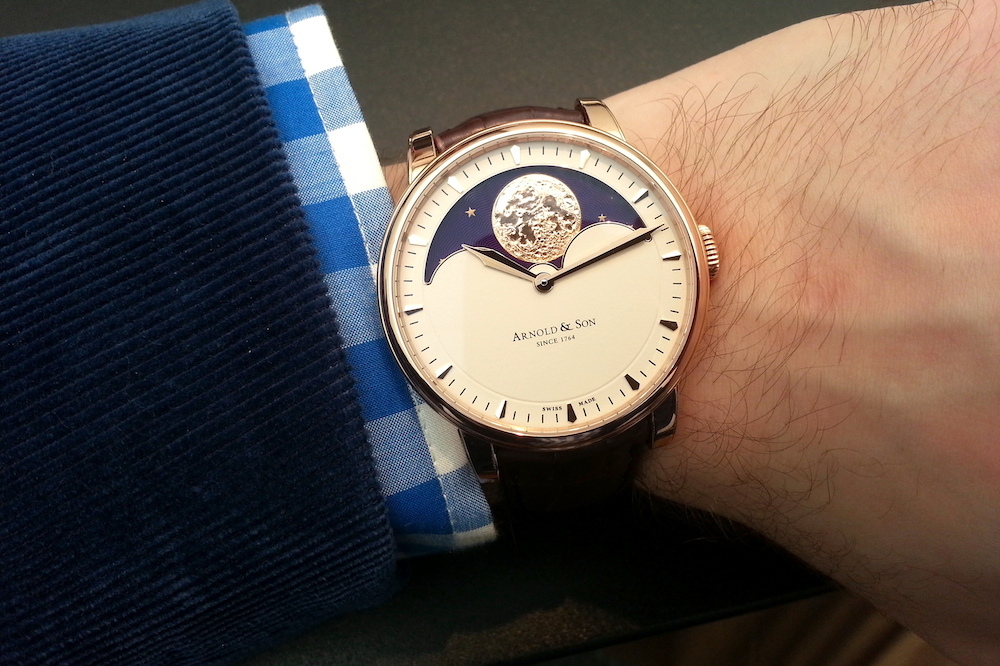